Despite the daunting clean-up job from the ice storm and intermittent outages of the internet and phone systems, WHS has been able to complete four very happy dog adoptions.

Beautiful Lagatha went home with her new family on Thursday. She was very stressed at the shelter, and we are overjoyed that she now is snuggled into her new peeps. 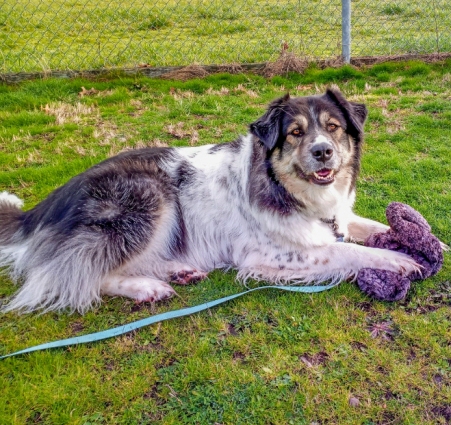 Also adopted was Isabelle. Lucky family! She’ll get to start slimming down. She is going to be such a wonderful family dog.

There was one very special adoption last week. Fetty arrived at WHS from an Alabama shelter in March 2019 after terrible tornadoes had hit his home town. He was extremely fearful and shy. Volunteers Linda and Jolene spent lots of time with him and he slowly began to be braver with the help of Pam, another shy shelter dog. Fetty was finally adopted in July, 2019. He was very happy with his new family, but when they moved from the house into an apartment, he had a hard time adjusting. Because he wasn’t doing well, his family sadly surrendered him back to WHS last December. He went to a foster home and—as frequently and happily happens—his foster family fell in love with this sweet boy. Last Friday they adopted him. We are so happy for Fetty. He’s such a good dog! 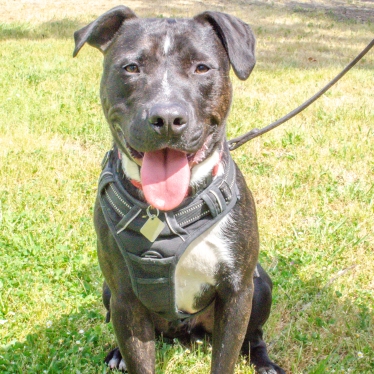 Sweet Miska went to her new home on Sunday. When WHS Trainer Jessi heard the news, she said, “She is an awesome dog!! She got along with everyone, walked great on leash, never heard her bark or anything.” 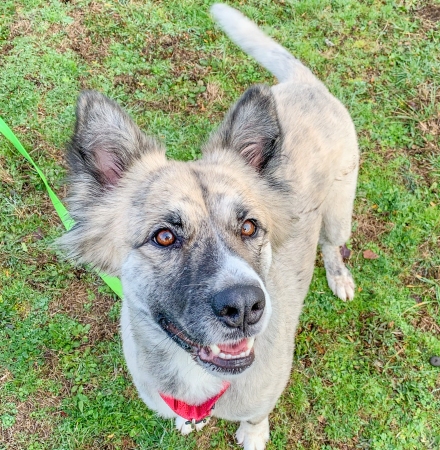 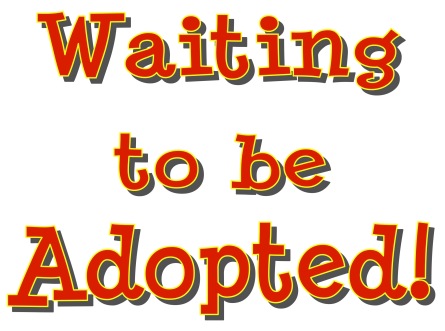 Do you like to play soccer? Do you need a goalie? I can do that!

Bastion is a three-year-old American Pit Bull Terrier mix who is an absolute delight to be around. Even though he has not had a very happy life so far, he is a cheerful, eager clown who keeps anyone nearby laughing. 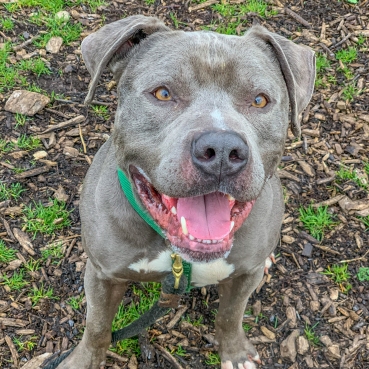 Bastion arrived at WHS a bit unsure of this new situation, but he has quickly adapted and become a favorite of both staff and volunteers. He absolutely LOVES to play soccer and his favorite position is goalie. Here’s how Nichole, WHS Trainer, describes his technique: “He really likes soccer balls. He will block kicks with his body then pick the ball up in his mouth, running in a curved body position all around the yard.” 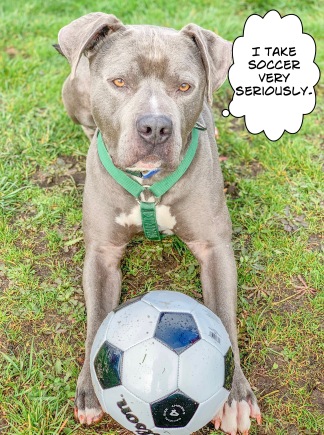 Bastion also enjoys the game of tennis-ball fetch as well as meeting new people. Nichole wrote recently, “Bastion thoroughly enjoys playing fetch. He even knows the cue ‘drop.’ He got the zoomies today in one of the turnouts. He also met two new people. He greeted them politely by sitting on cue and taking the treats nicely from the palms of their hands.”

Bastion is an active, enthusiastic young dog. He is embarrassed to admit that he has had very little leash training, and in his excitement about just about everything, he pulls—hard. He is working with volunteers and staff in loose-leash walking, and since he is highly treat-motivated, it shouldn’t take long for him to get the hang of it. Speaking of treats, his new peeps will not have to worry about purchasing expensive ones. Bastion likes just about anything as a reward, even his plain kibble! 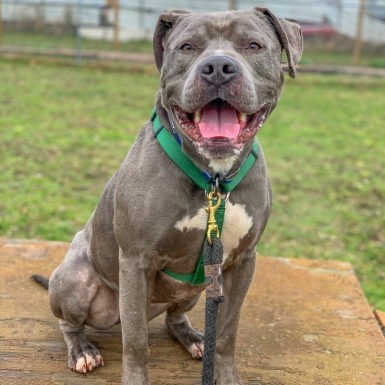 Bastion thrives on attention. Although he is a bit shy at first, he quickly warms up to new people. He enjoys pets and as one volunteer wrote, “Bastion is loose and wiggly, leaning into you and falling over when petted.” In the spirit of full disclosure, there is the slobber issue. Let’s just leave it at that.

Trainer Nichole has spent quite a bit of quality time with Bastion, and I asked her to tell me a little about him from her perspective. She wrote, “Bastion is a big marshmallow. Today he flinched when a leaf blew past him! He really likes soccer balls. Watch out for the slobbery showers! He enjoys a fast-paced game of chase. He can be the chaser or chasee, just as long as he’s moving. He will hog the sofa if you allow him up. Every treat is his favorite. He loves rump rubs and body scratches.”

Bastion enjoys rough and rowdy playgroups. He can be a bit overwhelming for some dogs, and would need to meet any dog he would be living with to make sure they had compatible play styles. He and Miska had great romps before she was adopted. 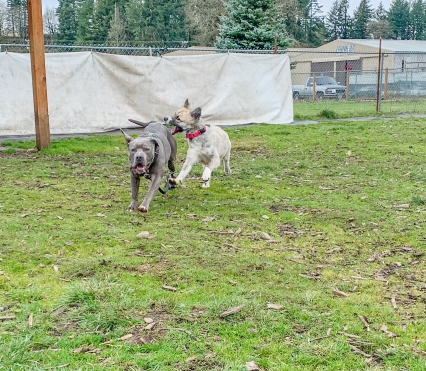 Bastion is uneasy in noisy, busy environments and would do best in a home that is calm. He is nervous around children and so is recommended for teens fifteen and older as well as adults. If children visit the home, Bastion will need a quiet place to which to retreat. Bastion will also need a home without cats. He is very much looking forward to a family of his own who will enjoy his clownish sense of humor and his wiggles, while overlooking the slobber.

On Tuesday, Marianne and Bastion spent some time outside together. They got to talking about the future. 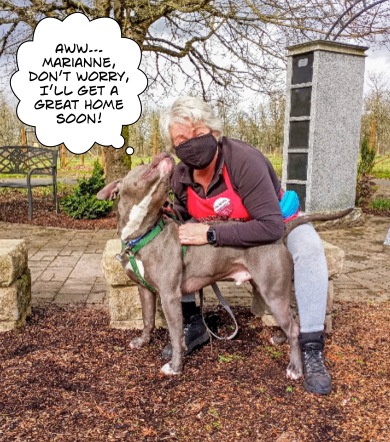 And then…who knew that Bastion could sing?! 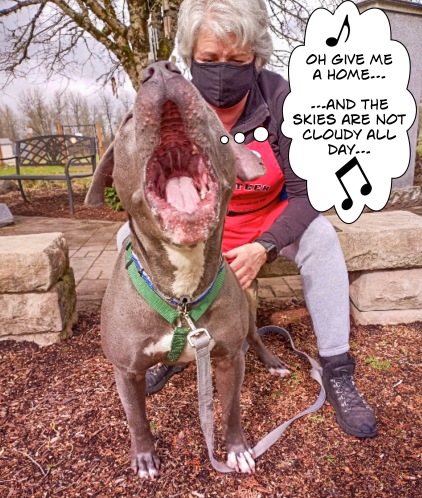 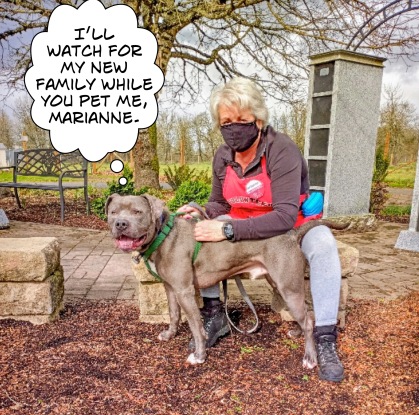 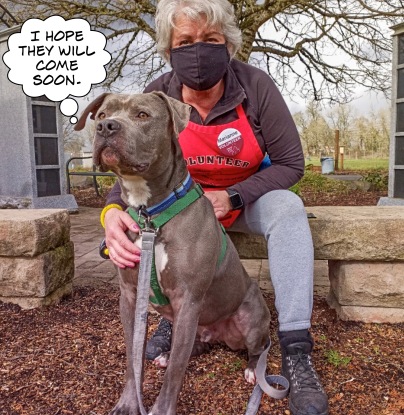 Bastion was mostly an outdoor dog in his previous home; he’s really hoping for a family who will enjoy cuddling on the couch, playing soccer, and telling jokes. This goofy, big-hearted dog will be a devoted best friend. If you have a calm home with teens or just adults, no cats, and a fenced back yard for soccer, Bastion may be your perfect fit. Fill out the Adoption Questionnaire by clicking on Bastion’s picture and then on the link Apply to Adopt found on this page: https://whs4pets.org/dogs/ 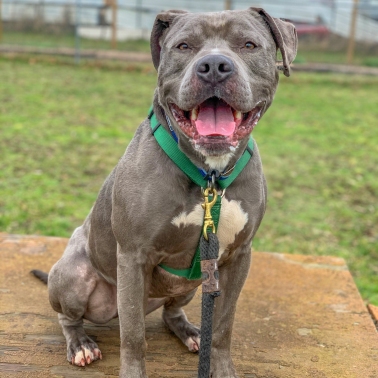 We’re hoping that Bastion will soon find the forever family he deserves.

As always, thank you to my “photo team” for the great pictures: Jessi, Nichole, and Marianne!

Other terrific dogs waiting to be adopted can be found at Willamette Humane Society. Here is the link to the adoptable-dog page: https://whs4pets.org/dogs/

Dear Fellow Dog Lovers, It’s been quite a week. Our Willamette Valley was hit on Friday with an historic ice …