The number of adoptions last week was amazing! Many, many Willamette Humane Society dogs were in their new homes for Christmas. Among them were these Blog Dogs. 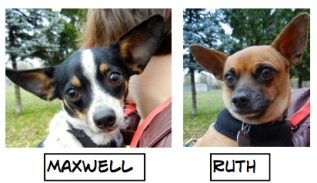 Gazelle and Gemini are the bonded pair that flew up with Wings of Rescue. I’m happy to say they went home together!

Sunday’s play group was extremely wet, however the dogs had a great time sloshing around in the rain. Not wanting to get my camera wet, I did not take many pictures. But I happened to hear a muttering behind me under the wooden shelter and turned to find Charlie standing on the bench.

Yes, Charlie is back at WHS. His adoption wasn’t quite the right fit, so he is waiting a little longer for his perfect family. We all hope it will be soon, though we certainly enjoy his play group antics.

We’re new here! Both of us!

When I arrived at the shelter this afternoon, the first person I saw was Kada on her first official day as a new Wednesday dog walker. She happened to be walking a new-arrival, Chester, an eight-year-old Pekingese mix. Chester is a laid-back kind of guy, walks well on leash, took my treats gently and posed for pictures without complaining.

He is such a cute little man, I have a feeling he’ll be adopted very soon.

I’m eagerly waiting for a new family to love!

One of the first dogs Bethany took out today was Austin, a two-year-old Pit Bull Terrier mix who is a such a happy-go-lucky boy, you can’t help but smile when you’re with him. He loves to play ball, but also enjoys just hanging out with a person. He’ll be a great family dog for older kids. He is a START dog from California. 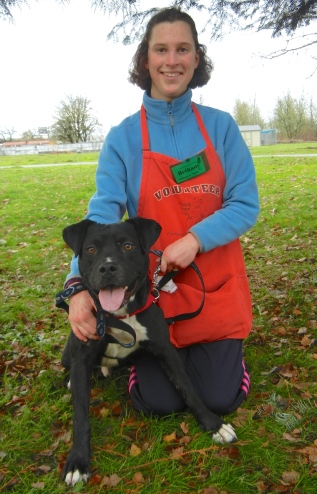 Of course I was anxious to see Rockstar today and was happy when I saw him having a great time playing in a yard with Debbie. This is his “serious” look. It means, “I know you have hot dog bits. How long do I have to pose for pictures until I get some?” Rockstar is another START dog who is 10 months old. He is a Lab/American Staffordshire mix. He’s been waiting for his perfect fit of a family since September.

I’ve been here quite a while. Could you be my new person?

I am surprised that Hailey is still at the shelter. She arrived a month ago from a rescue in California. She has unusual ears and different colored eyes, which give her a distinctive look. She loves the attention of people and would enjoy being part of an active family. Hailey is a one-year-old Pit Bull Terrier/Husky mix. Kada enjoyed spending some quality time with her this afternoon.

I’m going on a respite! A respite!

One of my current favorites at the shelter at the moment is Mary Tyler Moo, another START dog who is a six-year-old Pit Bull Terrier mix. This afternoon I was thrilled when Saturday dog walkers Patrick and Nakai came to take her for an afternoon respite to walk in the park. Mary was so excited to jump in the car and head out on her adventure. She is such a quiet, gentle girl and is overwhelmed by all of the activity at the shelter. She sits calmly and sadly in her kennel and so to see her get to have an afternoon outing was great!

I’m looking for an experienced owner who will love me!

Another one of my favorite dogs at the moment is Mary, a four-year-old American Bull Dog mix. Mary has an outgoing personality to put it mildly! She LOVES romping with male dogs in play group but can get pushy with other girls. She enjoys playing ball with people, but has no idea how she resembles a freight train in action! While she can walk politely on leash when she’s calm, excitement leads to strong pulling. Mary is a goofy, happy, affectionate gal who will make the right person a wonderful companion. She’s smart and is a great candidate for WHS training classes! Today Bethany spent time with Mary in the big yard and they had a blast.

With all of the pre-Christmas adoptions, all dogs had had their walks before my shift was over. Volunteer Linda had come to spend some time with Rockstar, one of her training “projects,” and so we decided to ask permission to have a mini-play group. Linda, Debbie and I took out some dogs we knew loved to play with each other and they had a fabulous time, being very rambunctious! Charlie, you may recall, was extremely overweight when he arrived in the beginning of November. I’m happy to report that he has lost 22 pounds! He now jumps up on the platform effortlessly and races around the yard with the other dogs. It’s so much fun to watch.

He also, of course, still loves attention. Charlie is a five-year-old Pit Bull Terrier/Lab mix. We hope he’ll be found soon by just the right people.

Rockstar, who has never met a dog he didn’t like, had a grand time with everybody. Here Linda is goofing off with the silly boy.

And here they all are just enjoying each others’ companionship. It was such a fun time for all of us!

I have three wonderful updates today! First of all, regular readers will certainly recognize this guy…

Remember Tido? He came to WHS in September after spending eight months at the Redmond Humane Society. By the end of November, those of us in both shelters who loved him were so discouraged. No one had shown any interest in adopting him. I put pictures of him on my blog week after week, but still people walked past his kennel scarcely looking at him. Then when two ladies from newly-established Pittie Pals came to WHS to take Lucy into their program, I asked them to take a look at Tido. They fell in love with our boy and decided they would take him into their program as well. Last week I got the BEST news! Tido has been adopted by a family with a young man who has become Tido’s best friend. The bond that has formed between them is incredible. Tido finally has a boy of his own and is loved and pampered. A wonderful new life for a dog who spent almost a year in shelters. More information about the wonderful Pittie Pals organization can be found here: http://www.pittiepals.com. They also have a Facebook page at: https://www.facebook.com/salempittiepals

I first met Daphney last July. She arrived at WHS on a Sunday afternoon, eleven years old, confused and frightened. I felt so sorry for her as I snapped pictures of her for the website. Over the next several weeks, Daphney relaxed some and a volunteer named Tom started spending time with her. Tom had another Border Collie named Ben and soon he was taking Daphney home on respites. It quickly became obvious that Tom, Ben, and Daphney belonged together, and I was thrilled when Tom said he was adopting her. Since Tom helps with Sunday play groups and brings Ben and Daphney along, we get to see her most weeks. I recently asked Tom for an update from home:

“Hi, just a little note to let people know how Daphney is doing. She has settled in to her new routine and seems to enjoy life again. Tuesday, Wednesday and Thursdays she comes to the computer repair shop with me and enjoys greeting people when they come in for service. At home she loves the walks we take with her new brother Ben. Daphney has gotten to meet some of my family and especially likes my grandniece Abby who enjoys walking her around the yard.”

Little did I know that Daphney would choose to write her own update!

“Hi my name is Daphney I’m a eleven year old Border Collie that was at WHS in July, I was so sad and lonely I didn’t even want any treats. The humans at WHS were so nice to me taking me on walks and trying to cheer me up. Martha and Sarah even brought me into the meeting room and shared their lunch with me. That’s when Tom came in and little did I know that that was the start of my new forever home. The next week he spent a lot of time with me on our walks. After playgroup instead of putting me back in my kennel he put me in his truck with Obi Wan (Old Ben) the easy going Border Collie I was visiting with earlier. I love going places and even though I was nervous I was looking forward to a new adventure. That night I started coughing and was feeling real bad. The next morning I took my medicine (I knew he hid it in the treat) and in a couple of days I was eating like I hadn’t had food for a month. My appetite calmed down and my cough went away and now I’m so happy to be in my forever home. I get to go to work with Tom three days a week. Ben and I are the “official greeters” at Fortress Computers. I have some great nieces that love to give me so much attention. We go on walks where Ben protects me if I hear scary noises. I can be found most Sundays at playgroup the rest of the time I’m just lying around at the ‘old dogs’ house’ as Tom’s friend calls it.” 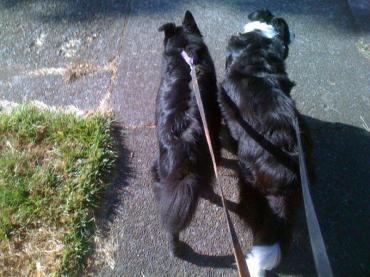 This last update was a delightful surprise. One of my WHS Facebook page readers sent me an update on a dog whom they adopted before I started volunteering at WHS! Here is Jenna’s update and photos! Even though I never met Kya, I can tell she’s a wonderful girl!

“Hey! I’m Jenna from Facebook… I adopted my doggy Kya from you guys in July of 2005. She was born, we think, in December of 2004, so we made her birthday December 7th. She just turned eight years old! I have attached a few pictures of her. One is the first day I met her, one is a picture that was in ‘Dog Fancy’ when Portland, Oregon was voted most dog park friendly city and her picture was printed in the magazine. The third is of her on her eighth birthday!” 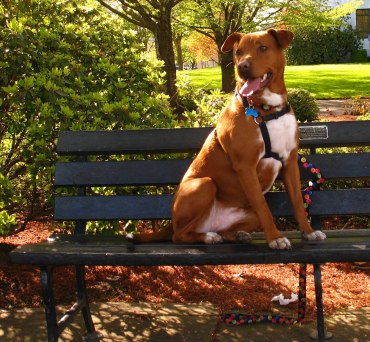