Tonight was the Willamette Humane Society’s 2013 Humaneitarian Award reception. It was a wonderful evening celebrating some amazing animal advocates in our community. Several of the nominees and winners of the awards, including the Volunteer of the Year, are friends of mine who do so much to help homeless shelter dogs and cats. More on this topic later on in this post!

We had lots of adoptions during the past week and many of them were Blog Dogs. Here they are. 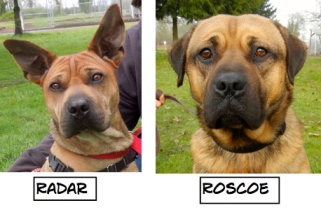 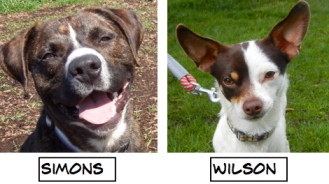 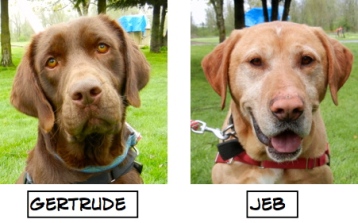 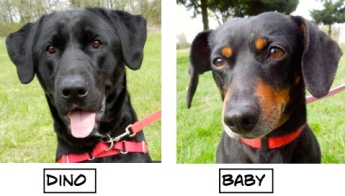 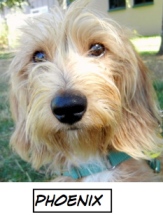 Sunday play group was busy and action-packed part of the time, calm and quiet other times. Here’s what I overheard.

Surprisingly, little Phoenix seemed to be the leader of the big dogs on Sunday. 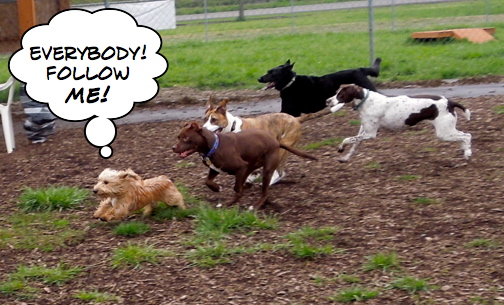 I am always amazed how dogs think that if they can’t see you, they are sure you can’t see them. 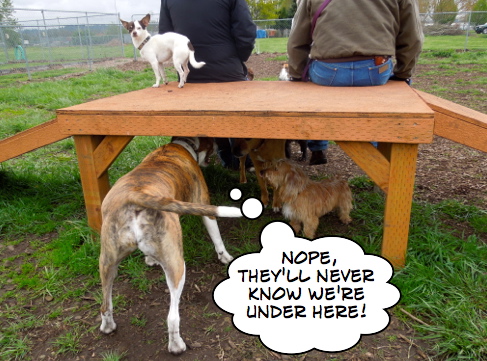 After a vigorous romp, Maggie let me snap this picture. 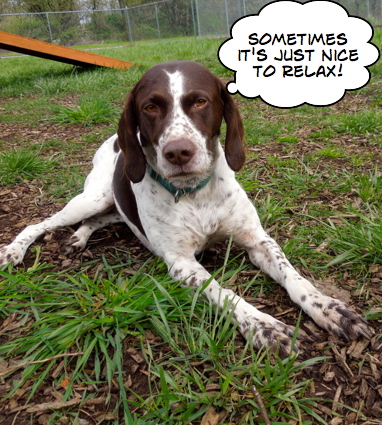 Romeo thoroughly enjoyed the morning, but stopped long enough to remind me he is still waiting. 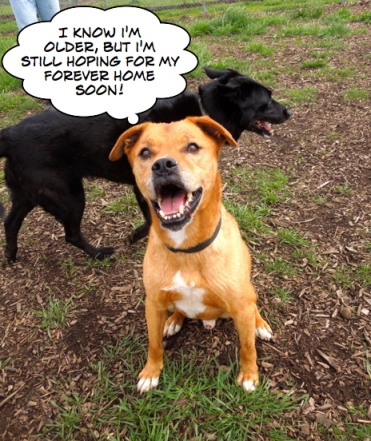 I may be an older girl, but you’d never believe it to see me play!

One dog whom Sarah and I both immediately loved is Tia, a fourteen-year-old Lab mix. Fourteen, you say? Well, neither Sarah nor I could believe it. Tia acts like a much younger dog who loves to run and play. She was very active in play group, and later, Sarah and I took her into the training room to hang out with us while we had lunch. She loves to play ball and drops it at your feet. She is affectionate and has lived with both children and other dogs. She is pretty much a perfect dog with great manners. I hope that her age does not discourage people from considering this terrific girl as a new family member. 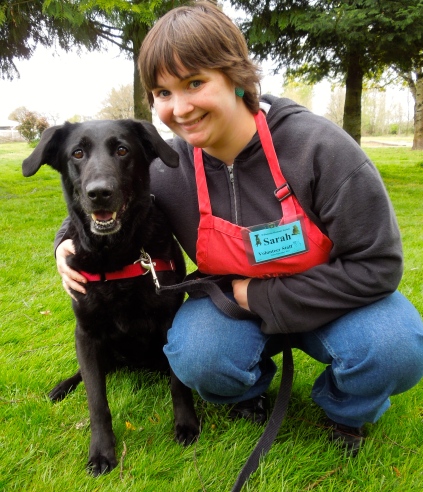 My name is Kazoo and I’m told it’s a perfect fit for me!

Another newbie is Kazoo, a one-year-old Australian Shepherd mix. Kazoo is currently in a foster home and Karla, his foster mom, sent me the following update about him. 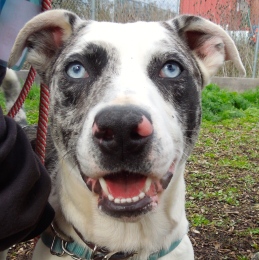 “Kazoo is a most appropriate name for this canine.  He has crystal blue eyes, a masquerade-like mask, a splash of merle coat, a festive ring tail, a party attitude and endless energy.

Kazoo rode politely in my car and he was ‘at home’ the minute he came into my home.  As one example, he took an offered black Kong (without stuffing) and entertained himself with it for an hour and a half!!!!  But changing from play to downtime didn’t and doesn’t blow his cool.  He has accepted crate confinement so calmly.

This tail-wagging party animal respects furnishings and shows no habitual counter-surfing behavior. And when he’s about to make a rare crossing of household rules, he responds well to a hasty ‘HEY!’  He’s biddable (willing to do what is asked of him).  He’s smart.  He is affectionate without being overbearing.

While this stray was obviously shown the way inside a home by a kind former owner, his lack of socialization with the outer environment shows.  Like many dogs, he could walk more politely in a distracting environment. He will need some continued training in this area.

Medical/care handling procedures aren’t yet his strong suit either, but are improving.  I thought I’d see how he’d do with a Dremel (sand grinding tool for trimming nails).  What a joy it was to watch him transform, over some seven or eight sessions, from a dog who distrusted and tried to chase the tool away, to a dog who happily understood, ‘This isn’t going to kill me!  And by the way, I do like the steak treats!’ 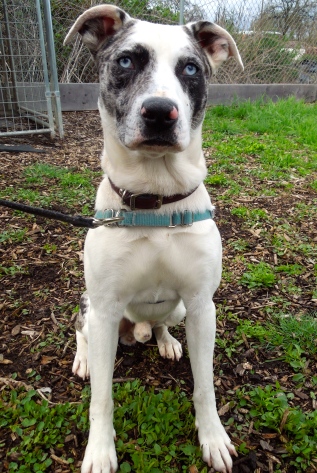 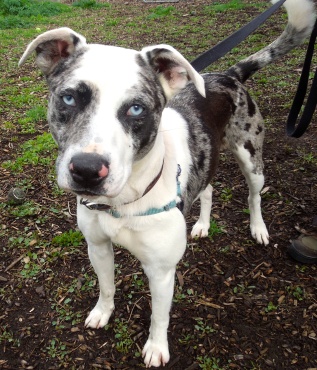 We’re hoping that Kazoo will be adopted soon!

I’m very anxious at the shelter. I’m hoping for a new family to love very soon!

Maggie is a seven-year-old German Short-Haired Pointer mix. She is loving and anxious to please. She has lived with small children and done very well with them. She is house-trained and hoping for a home where she can be an indoor best friend to the family. She does not, however, like cats and shouldn’t go to a home with them. In play group she enjoyed running around the yard with the other dogs, but then decided that lying in the grass for awhile was nice, too. She doesn’t like to be away from her people, so she will need a patient family to help her with her anxiety when left alone. She seemed to enjoy posing for my camera.

My name’s Amanda Mae and I need a new family! How about yours?

Amanda Mae arrived at the shelter on Sunday just as I was leaving. She is a seven-year-old Collie mix who has it all. She has lived with children and other dogs, she is a gentle player, is house-trained and loves to hang out inside with her family. Here she is with volunteer Linda who liked her immediately. 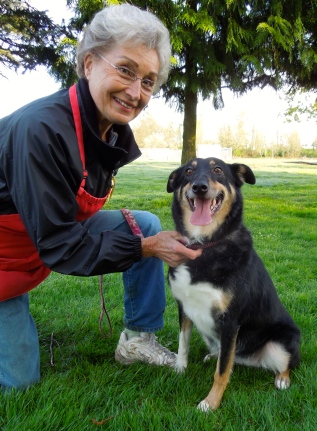 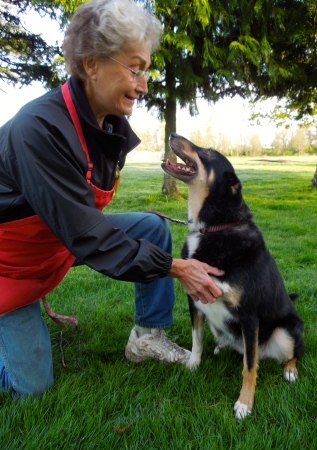 She is as gentle as she is beautiful! 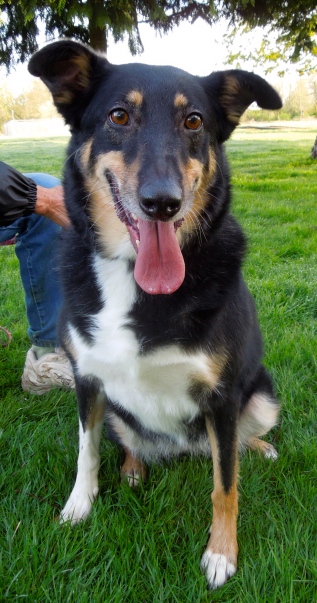 In October of 2012, I took this picture of a new puppy at the shelter named Be There. She was a S.T.A.R.T. dog and was adopted quickly. 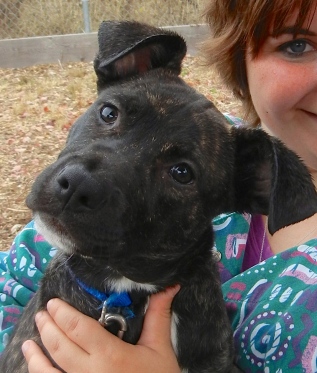 Last week she came back because her family couldn’t keep her any longer. Her name is now Luna and here she is today. Luna is now nine months old and is a Pit Bull Terrier mix. As you can see, she is a very happy girl. She is looking for an active family. She would be a great running or jogging partner. She is working on her leash-walking skills. She still is a puppy at heart and loves to play. She’ll make a wonderful adventure buddy! 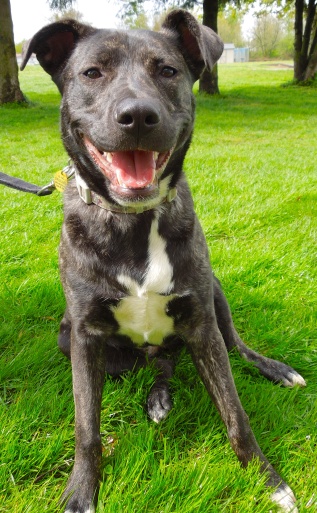 Here she was today with volunteer Bethany. 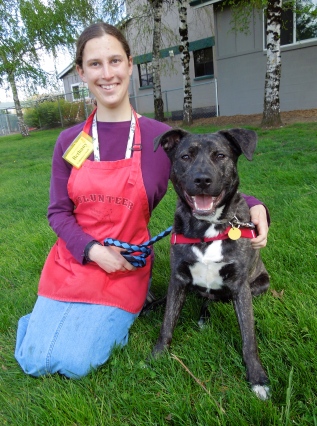 Martha’s word for me is “stunning.”

Yep, that is what I said when I saw this dog. His name is Diesel and he is a four-year-old German Shepherd mix. He is nervous around new situations, but warms up quickly. He knows several commands and is treat-motivated. He does need work on his leash-walking skills, but he is smart and a quick learner. And, did I mention that he is stunning? 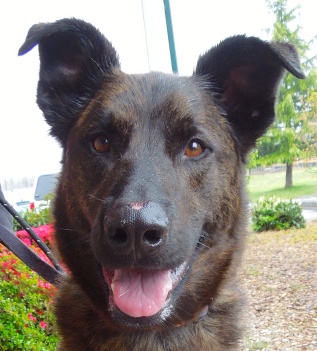 Here he is with Sarah on Sunday. 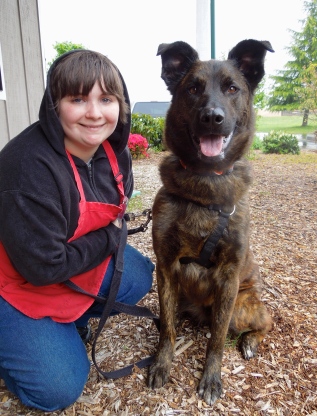 Have you been waiting for a “Ball Dog” to adopt? I’m it!

This is Gunner, a six-year-old Lab mix who is such a friendly and happy boy! Volunteer Steve discovered that Gunner LOVES to play fetch and drops the ball at your feet when returning it. He is cooperative and eager. He has lived with children and another dog. He took my hot dog bits gently. Some family will be very lucky to adopt this happy-go-lucky character! 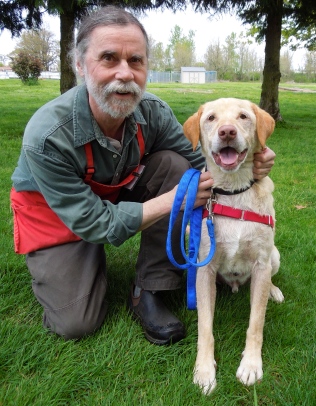 I’m still here waiting for my perfect family to find me!

Thunder seemed happier today than last week, and friskier. Since he’s had to be on only short-leash walks since he was neutered, he’s got some pent-up energy that he can’t wait to burn off. The poor boy wants to run and play so badly! Volunteer Debbie told him that it won’t be long until he can romp, but like all dogs, Thunder lives in the moment. He is a two-year-old Pit Bull Terrier mix. I love his smile! 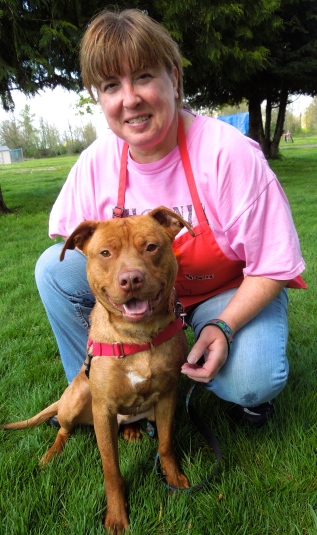 I’m still shy, but oh, so much better than I used to be!

The last dog I took out today was one of my favorites, Buddy. You may remember from last week that he is a one-year-old Newfoundland/Boxer mix who came to us extremely under-socialized. Today when I went to his kennel he was eagerly waiting at the door. However, when I opened it, he immediately turned around and went to the back. After a little coaxing, he came forward again and allowed me to put his leash on. Then he happily headed outside with me. This shy boy has come a long way from when he first arrived at WHS. He’ll need a patient and understanding owner, but what a joy he will be as he continues to gain confidence. 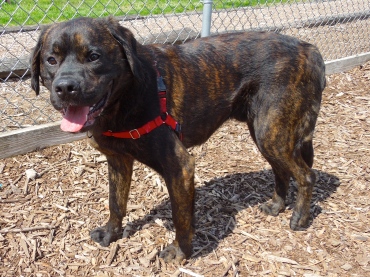 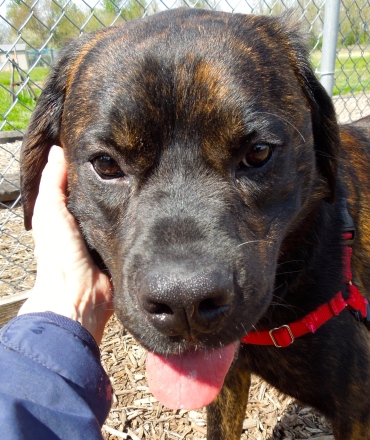 Tonight was a wonderful evening recognizing many contributions made in the name of animal welfare in our community. Several of the nominees are fellow volunteers and friends of mine, and I want to post their pictures here.

Krystal Kraig, Randy Mills, and Barb Cash. Randy is Volunteer of the Year! 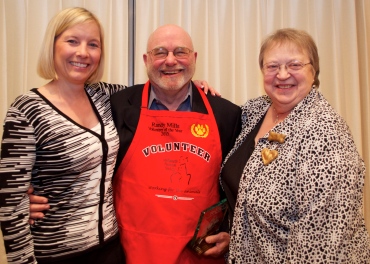 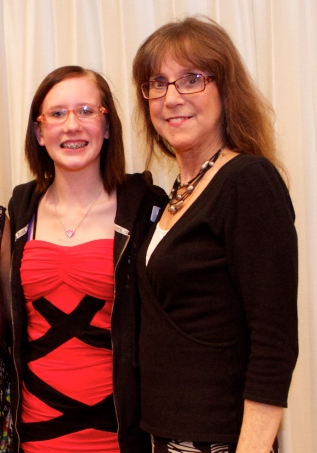 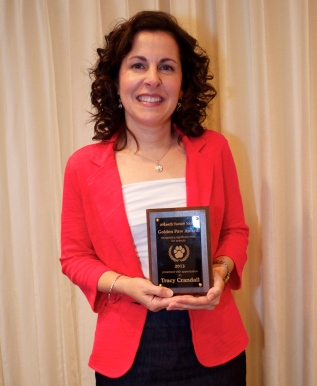 It is an honor to volunteer with such fine and dedicated animal lovers.

Here are all of the 2013 nominees. An incredible group of people. 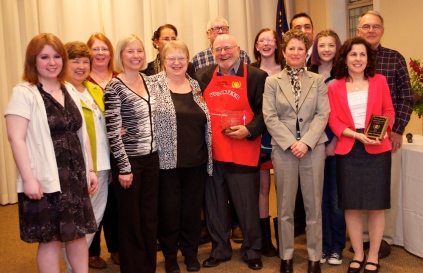 Remember Daisy? When I posted her adoption news on my WHS Facebook page, her new owner sent this happy update! 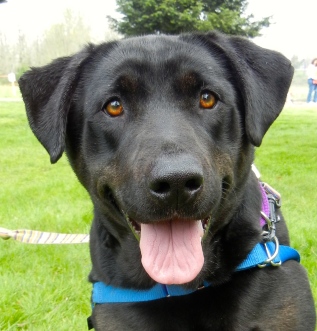 “I’m Sophie’s new mama (we renamed her). We are in love! We’ve had no chewing, no digging & she is not obsessing over her food at all. She gets a short walk very early in the morning (4 am as I get up early for work) and a long one after I get home from work since she needs to lose some weight (as do I!). She sleeps all night on her bed next to ours and no accidents in the house so far. I was able to train her to come to her new name in 2 hours (with a treat incentive). We cannot wait to bring her in for training as she is so smart! Thank you for letting us pay it forward in the honor of our old dog Jake who we adopted 11 1/2 years ago from WHS & who passed away recently at the age of 13. She is such a delight. Will send you an update in about a month.”