Here’s your friendly weekly reminder to sign up for this year’s fun walk/run! It’s coming up soon! Sign up here: http://whs4pets.org/animal/shelter/news/willamutt_strut_fun_run_walk

We had some terrific adoptions this week, and one that took a piece of my heart with her! Emma found her new family! Here are all of the Blog Dogs who went home. 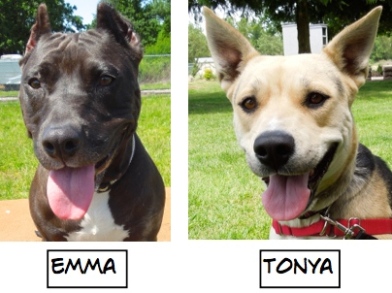 Here is the staff helping Emma to get ready to head home.

And here she is with her new family. She has three young boys who will shower her with love and attention. We are all so happy for this special girl who was rescued off the street in California and now has her own boys who were so excited to take her home. 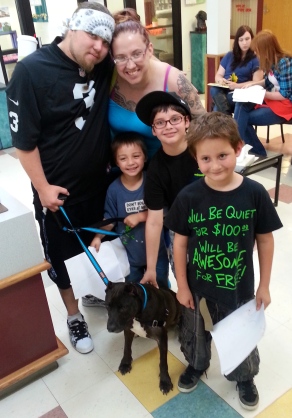 If you are a regular reader of my posts, you have seen volunteer Caroline in many pictures with shelter dogs. Well, here she is with her very own adopted shelter dog. Tonya was a recent S.T.A.R.T. dog from California who now has a wonderful Oregon family.

I wasn’t able to go to play group this week, so sorry, no chatter, but I heard it was great fun for everyone.

I’m back! I just know that I’ll find a home this time!

I first wrote about Pancho in November of 2012 when he arrived at WHS. He came to us as an outdoor dog and that’s the way he likes it. He was adopted twice and returned, first because he does not like cats (he’ll need a totally feline-free home), and second because he didn’t want to be an indoor dog at all. If you’re looking for a friendly, but socially low-maintenance kind of guy, Pancho is for you! He has spent the last several months at another rescue and has now come back to us hoping for just the right home. Pancho enjoys people, but is happy spending time in his yard alone and would rather not be overwhelmed with attention. He does fine with other dogs. He is an eight-year-old Pointer/Collie mix. Here he was with Bruce on Sunday. As you can see, he is a happy boy with a good sense of humor. We’re hoping he’ll find a home with lots of outdoor space for him to hang out.

Pancho enjoyed his time with Bruce.

So this is Oregon?

Ginger is a new S.T.A.R.T. arrival from California. She is a two-year-old Pit Bull Terrier mix who is shy when she first meets you, having never been in Oregon before. She walks pretty well on leash, though she needs to work a little on taking treats gently. She is eager to start a new life with a new family in a forever home. She knows how to sit when asked and is eager to learn new things. Since she’s treat-motivated, training will be easy! She’d love to attend some of the classes WHS offers. Jolene and I enjoyed meeting this young girl on Sunday. 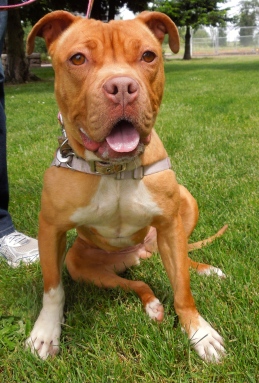 I’m great with kids! Want to adopt me? I’ll be waiting!

Volunteer Susan had one of my favorite boys out Sunday afternoon. This is Rocco, a nine-year-old Bull Dog/Pit Bull Terrier mix who is great with kids. He walks well on leash, is good about taking treats and loves to pose for pictures.

Rocco loves a good belly scratch, and Marianne, one of his biggest fans, is happy to give him one. 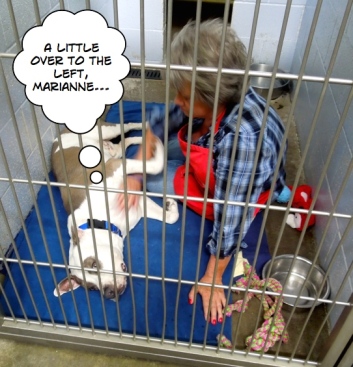 A while later, I again passed Rocco in his kennel. He was hoping I’d take him out for another walk. What a look that goes straight to your heart! We’re hoping the perfect family finds this wonderful boy soon!

I’m hoping for a one-pet home. That would be ME!

Nicki is a six-year-old Australian Cattle Dog mix. She has been waiting for a new family for several weeks and is hoping one will come soon. She’s a people dog. On Tuesday she went to play group, but was not a happy camper and although she did well, she’d rather just be with her humans. She’s a sweetheart and tries her best to cooperate with whatever you want her to do. Volunteer Andy enjoyed being with her on Sunday.

Sadie is another California transplant through S.T.A.R.T. and is an eleven-pound Mini Pinscher/Dachshund mix. She was pretty nervous coming outside, but once she was in Jolene’s lap, all was well. She wasn’t sure at first if she wanted to try my hot dog bits, but decided once in Jolene’s arms, that she liked them.

I love her ears! I couldn’t help thinking of the Flying Nun!

I heard about Lilly from several people before I met her. “Martha, you’re going to LOVE Lilly!” was said more than once. Yep, they were right. Lilly (another S.T.A.R.T. dog) is a one-year-old Pit Bull Terrier mix whose gentle nature makes her a great choice for a family with kids. She will need exercise, but what fun it will be to train this eager, fun delight of a dog! WHS classes would be perfect for Lilly and her new family. Here she is with volunteer Karla. 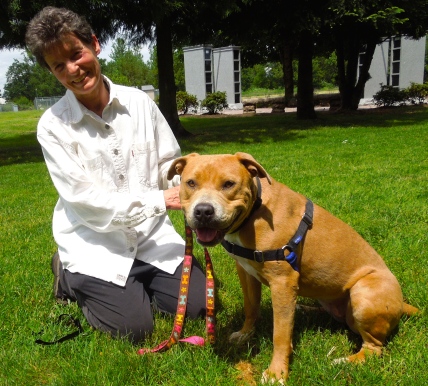 Every week I hope to see that this duo, Koda and Mater, have been adopted. They are such fun little characters. In play group they race around romping with each other as well as other dogs. Their hobbies are long walks, munching hot dog bits, and hanging out under the trees. They are eleven-year-old Miniature Poodle mixes and will make some lucky family the best of friends. Here they are with volunteers Ian and Diane. 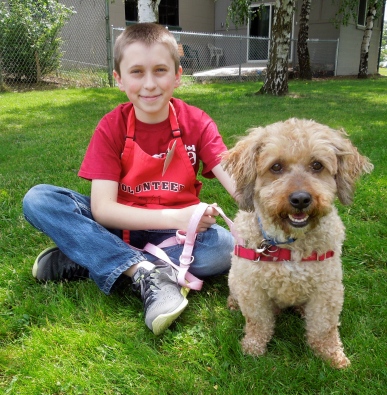 So…today Emelynn and I took the boys out to the big yard. We played Come Get It, which involves treats and calling the dogs to us so they run back and forth. They loved it. Here are some pictures of our fun.

Here they are waiting for a treat from me.

Then they dash to Emelynn. 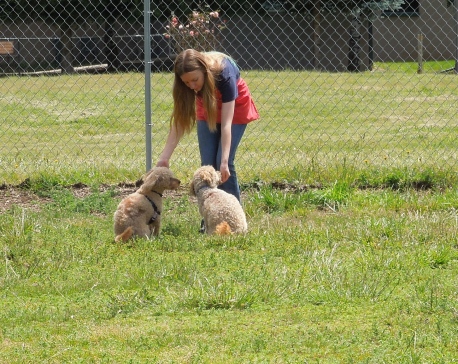 And some snuggle time after the game.

Martha says it’s a mystery why I haven’t gotten adopted yet!

I don’t get it. Adrian is a seven-year-old Pit Bull Terrier mix and is about as sweet a girl as they come. In play group she romps on the mellow side with Mater, Koda, and other small dogs. She walks great on leash, loves my hot dog bits and is eager to please. She’s been waiting for her new family since April 24. It will be a very lucky family that finally recognizes what a gem this little girl is! She loved her time with Wendi on Sunday. 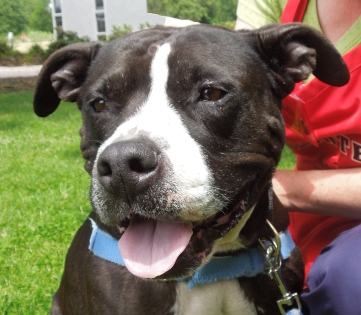 I am little, but I will be a great friend to you!

This is Mickey, a twelve-year-old Chihuahua mix who is looking for a family. He’s another S.T.A.R.T. dog from California, so we don’t know his history, but he certainly seems to be a charmer, Bruce and I found out. Mickey is shy, and hopes for a quiet home with a loving family. I wish he could tell us his story, but whatever it is, I hope he’ll get a great home for the rest of his life.

This happy boy is Rodeo, a seven-year-old Shepherd mix. As I told you last week, volunteer Linda has been giving him some extra training time as she noticed that no one was showing an interest in adopting him. He’s been waiting for a family since the end of March. Rodeo is a quick learner and LOVES people. He’d make a great hiking or jogging partner. I’m really hoping that he will get noticed by a new family soon! He spent some play time with Diane and Andy. 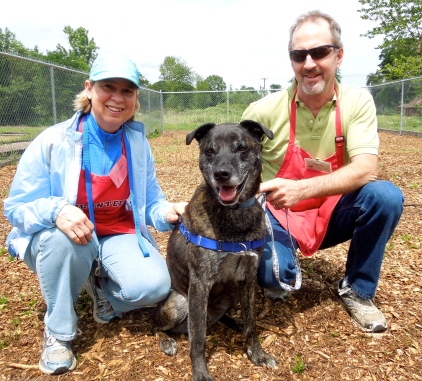 I’m getting better about going inside!

Roxy, a three-year-old Boxer/Pit Bull Terrier mix, LOVES to go outside and hang out with people in the grass under the trees (as you’ve seen in previous posts with Emelynn). Going back in…not so much fun. She would roll over on her back and sometimes we would have to carry the girl back to the building. However, volunteer Linda discovered that all Roxy needed was a cheerleader or two. Once several people were happily clapping and rooting for her as they jogged with her heading for the building, she willingly went along. Who would have thought! Roxy is a beautiful, affectionate, quiet girl looking for a cat-free calm home. Andy hung out with her on Sunday. 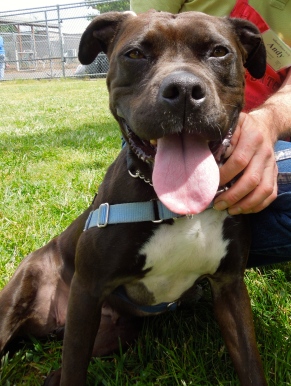 Today Emelynn spent some quality time with Roxy, her current favorite. The pictures speak for themselves. 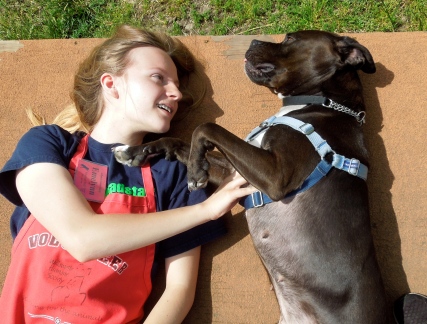 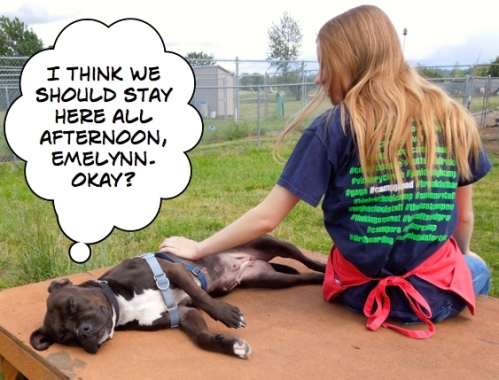 I was very unsure of this place at first, but now I’m feeling much better about it!

Jolene and I both fell in love with a dog who was surrendered while we were taking pictures of other newbies. Meet Maddie, a five-year-old Lab mix. She was very uneasy when we first took her outside for pictures and refused my hot dog bits. But after a little while of talking and petting, she relaxed enough to munch some treats. I was very happy to get an email from Jolene yesterday saying that Maddie had a great time in Tuesday’s play group, even though she stuck pretty close to Jolene’s side. Maddie has a great history with kids and dogs. She is house-trained and is pretty much the perfect canine companion. We’re hoping she’s soon in a family again.

I knew Martha wouldn’t forget me!

Of course, I have to report on Sheila. She had some minor surgery last week and so was sporting a cone on Sunday. This sweetheart was overlooked for five months in a California shelter until the S.T.A.R.T. team decided she’d have a better chance of being adopted in Oregon. Sheila is a five-year-old Pit Bull Terrier mix and became a favorite of mine the minute I met her. Wendi had her out for her afternoon walk on Sunday. Sheila doesn’t like to be reminded of it, but she does need to lose a little weight. She’s hoping that a new family will take her for long walks rather than giving her diet food. I told her maybe both would be good! 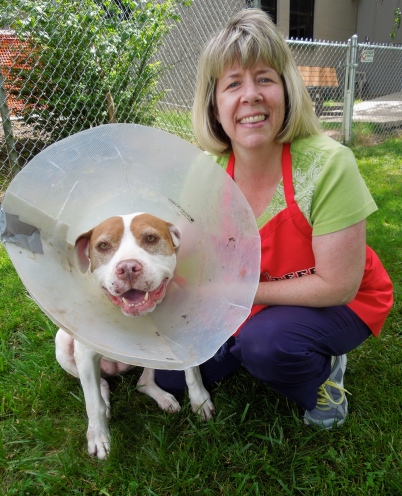 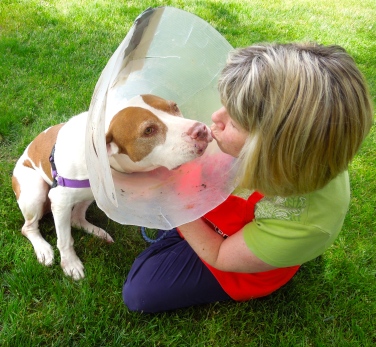 Young puppies need to be carried to visitation rooms to get some exercise since they have not had all of their vaccinations yet. No problem it would seem. That is, until you meet Sam the GIANT pup! But never fear, resourceful volunteers are here… Sam is a four-month old Bull Dog mix. He decided today he wanted Joan to make a visit to the pet store at the shelter!

One of the dogs I walked today was Jasmine, or as she’s now called, Jazzy. She is a three-year-old Shepherd mix. You’ve seen her before in my posts. She was adopted twice, but returned. First because she has a problem with cats…she chases them. And second because she is just too big for small children. She seems quiet depressed being back at the shelter and lies on her bed a great deal of the time. She’ll do best with a family with older kids. I had to coax her out of her kennel, but once outside, she enjoyed our walk. She wasn’t interested in treats, but walks very well on leash. I hope she’ll find her perfect family very soon.