There was a wonderful reunion at WHS on Monday evening. I took lots of pictures. But before I show some to you, you need to hear the story from the beginning…

It began on a Spring day in 2012. Long-time volunteer and foster provider, Krystal, got an urgent call from the shelter asking if she would be able to foster a mother Pit Bull Terrier and her THIRTEEN two-week-old puppies coming from California. After taking a deep breath, Krystal agreed and the love story began. 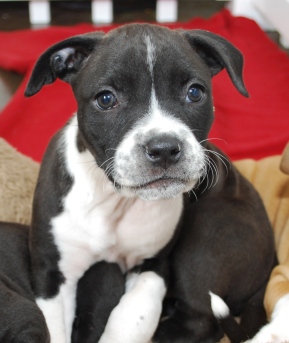 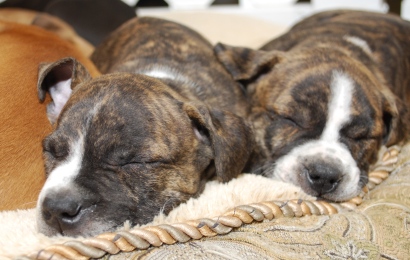 Along with the thirteen wiggly, squirming, hungry balls of fur came one exhausted but dedicated mother named Coco. 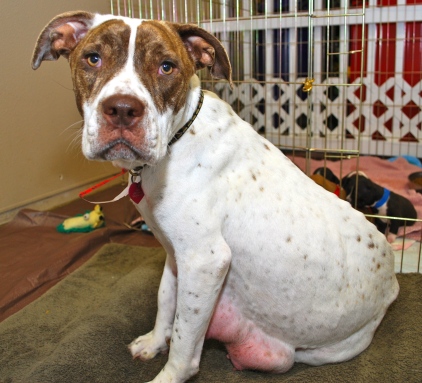 The puppies had to eat in shifts, there was the constant hum of the washer and dryer in Krystal’s house, and Coco was reassured that her babies really would grow up. The days flew by and before long the pups were old enough to be spayed, neutered and adopted. Coco had had her last litter of pups (she was thrilled!) and she, too, was adoptable. Friends of Krystal fell in love with Coco and she was soon living in a wonderful, happy, quiet world filled with love and attention. The puppies were quickly adopted to thirteen different families.

Fast forward to September 15, 2014. Invitations had been sent out to fourteen homes to attend a Coco & Puppies Reunion at WHS. When I arrived at the shelter Monday evening, excitement was in the air. Who would be able to come?

Coco was the first one to arrive, and what a transformation from her mother days!

Five of the “puppies” were able to bring their families to the reunion. To everyone’s delight, everybody got along beautifully. Did they remember each other? Who knows? But they had a romping good time and the families thoroughly enjoyed getting to know each other and comparing notes. Here are a few of the pictures I snapped during the evening.

Coco thanking Krystal for helping her raise her huge litter. 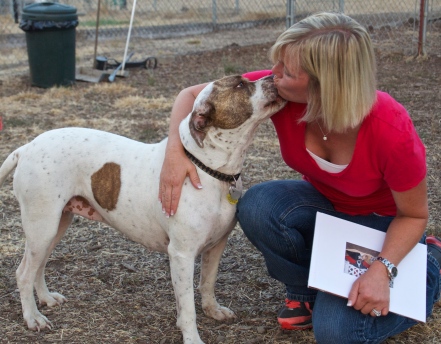 Let the fun begin! All grown up! 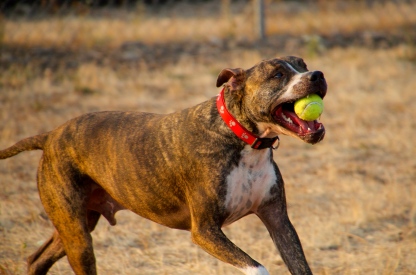 Then it was time for pictures of the pups and their peeps. 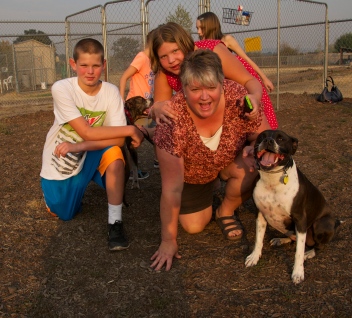 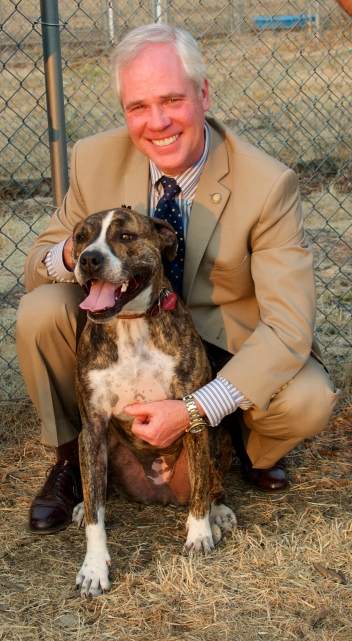 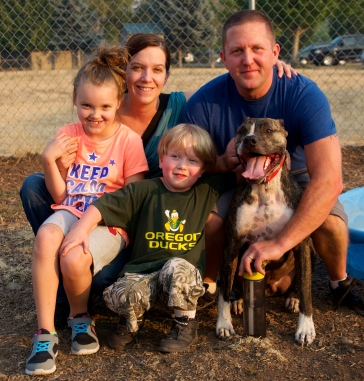 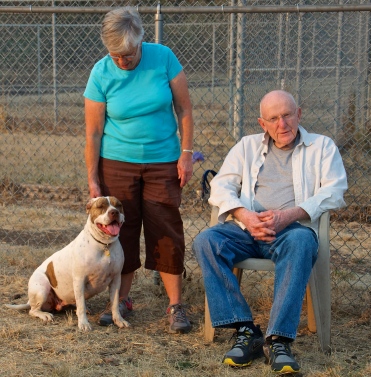 Here are just some fun shots I couldn’t resist putting in. 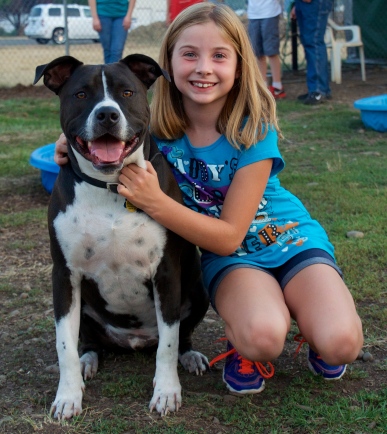 Yep, it was quite an evening. You’ll get to meet Coco and hear more of her story if you attend the WHS Bowser’s Boo Bash on October 25th! You can get info about this annual evening of fun and excitement here: https://whs4pets.org/bowsers-boo-bash-2014/

There were 14 dog adoptions during the last week and here are the ones who were Blog Dogs. 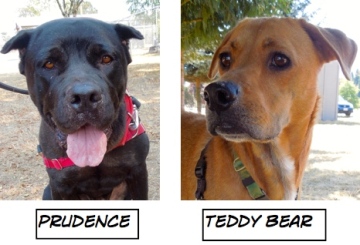 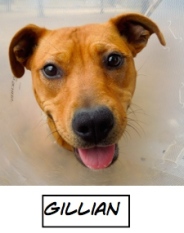 Bruce, you may recall from last week, couldn’t believe there was a person who was named Bruce. Here was his reaction when he was about to go home. 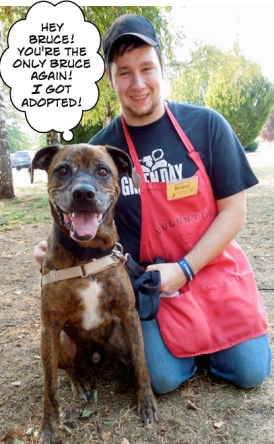 Buddy missed his best friend, Prudence, after she was adopted.

But he soon made new friends, including little Oreo. 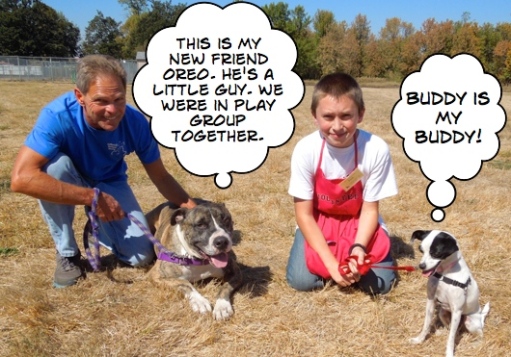 I’m a little older, but I will love you forever!

Amy, an eight-year-old Terrier mix, isn’t particularly fond of play group, but loves spending time with people. I snapped these two selfies during Sunday’s play group. She is such an affectionate little girl, as Ali found out. 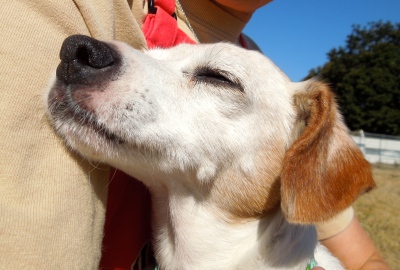 Here was Amy later in the afternoon with Diane. 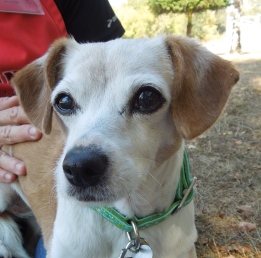 I’m looking for a fun retirement home! I have a lot of love yet to give!

One of my all-time favorite shelter dogs is Mikey. Don’t be put off by the fact that this sweetheart is thirteen years young, he still has a spring in his step and an eager personality. He is an Australian Cattle Dog mix. His favorite thing to do in the whole world is hang out with people. Because of his laid-back and cheerful demeanor, he has won the heart of everyone who has met him at the shelter. On Sunday I asked Jolene to bring out one of her favorites to be photographed with and this is the picture I took.

Today he was the first dog I walked. He loves going for a brisk ambulation and walks perfectly on leash, happily checking in with me as we walked.

Later, after all the other dogs were walked, I went back to take him out again, but he was gone…already out for a second time with Joan, another one of his fans. They were relaxing in the big yard. 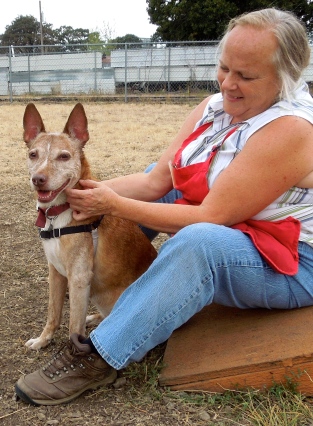 After Joan left, Mikey and I sat under the trees for awhile with Emelynn, who snapped this picture of us. 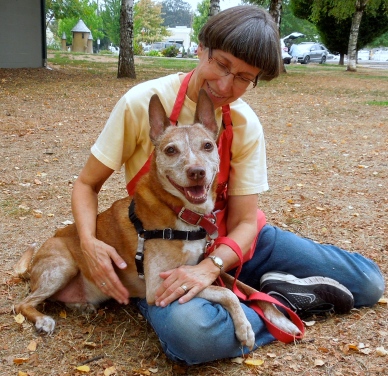 So that was Mikey’s afternoon. He and those of us who love him are hoping for the perfect match of a family very soon!

Oreo is a five-year-old Chihuahua/Fox Terrier mix. She weighs seven whole pounds and is house-trained. Here she is with Marianne and staff-member Cassidy on Sunday. Oreo would love to be adopted by a family who wants to play and then cuddle. She had a fun time in play group with the other little dogs and Buddy. If you’re looking for a playful, happy little girl, Oreo might be a perfect fit!

I’ll prance right into your heart!

If you come to the shelter and approach the front of Lacie‘s kennel, you will be greeted with her cute little dance in which she shows her excitement by alternating lifting each front foot in rapid succession while giving you a huge grin. I guarantee it will make you smile. Lacie is a seven-year-old Pit Bull Terrier/Beagle mix. She loves people and especially kids (best if they are 8 or older). She is house-trained, loves to go for walks, enjoys active play but also wants to be a lap dog when it’s time to relax. Lacie would prefer to be an only dog and she really doesn’t like cats. This girl has been at WHS twice. I first met her in 2009 when she was found as a stray. She was again found lost last July. She is really hoping for a forever family this time! Let’s get this happy girl a wonderful home!

Emelynn loves all dogs. Over the many years I have known her, this I have learned. However, she has a special place in her heart for little ones who remind her of her own dog, Tad. And that’s why this week she chose Twinkie as her pick. Twinkie is a nine-year-old, twelve-pound Chihuahua. She is another one of those lap dogs who prefer sitting ON you rather than beside you.

Later in the afternoon after everyone had been walked, I found Emelynn and Twinkie under a tree sharing a book. They both seemed to be engrossed in The Odyssey.

Posing for the camera!

Who is that smiling dog next to Ian, you ask? Meet Suave, a seven-year-old Chihuahua mix who has had a rough start in life, but holds no ill feelings and can’t wait for a forever home where he can live inside and be taught all the skills he missed growing up. He also would like to get the exercise and “light” food he needs to shed a few of those pesky pounds he’s found himself carrying around. Suave has a delightful personality, loves play group with his friends, and will make a fantastic family dog with older kids with whom he can play, then cuddle.

How many volunteers does it take to hold a GIANT puppy?

Well, in the case of Brad Pitt (yep, that’s his name!) it took two! I usually don’t feature puppies, they get homes so quickly and don’t need my help. But I couldn’t help myself with Brad. He’s such a “little” adorable youngster at three months and twenty-eight pounds! (This pup is going to be big boy!) He wasn’t thrilled with his cone after being neutered, but took it in stride. Both Emelynn and Caroline fell in love with this cutie.

Here he was on Sunday prior to being “coned” with Andrew. With three holds, this boy will be going home very soon!

I’m very shy. I’m not sure about this place. I want a forever home.

Little Devy is a six-year-old Dachshund/Min Pin mix who is new to the shelter. Kathy walked her this afternoon and we both tried to assure her that everything will be okay. Devy is a S.T.A.R.T. dog from California and Oregon is a bit overwhelming to her right now. She really is “the whole package.” She is very well mannered, already knows some commands, gets along with other dogs and will warm up to you if you spend a little time with her. She would be a good first-time dog for a family. We’re hoping she won’t have to stay at the shelter long before a family realizes what a gem this little girl is!

For all of Wilson’s fans, here he was the first night in his new home. So happy he can relax!

Remember smiling Riley who went to live with volunteer Joan and her other dogs? Well, here are how things are going for the trio. Yay, Riley! 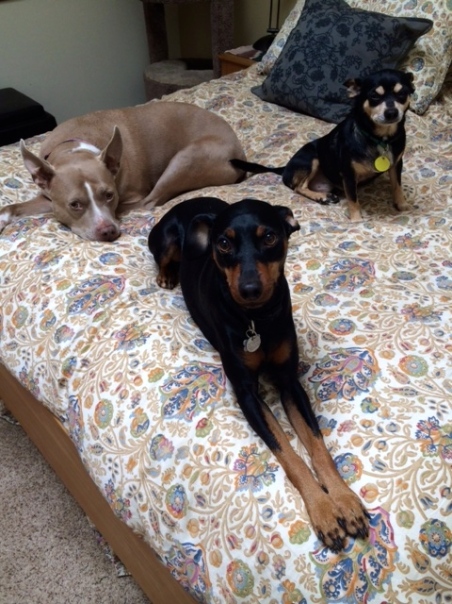