We’ve had another one of those extra-special adoption weeks. Twenty-three dogs were found by their new people! Some were youngsters, some were seniors. Some were newbies and some were long-time friends. Here are the eleven blog dogs who were adopted. 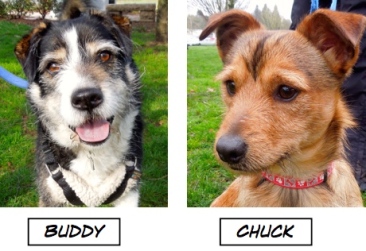 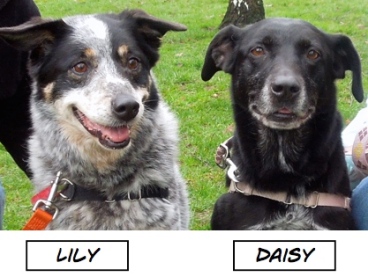 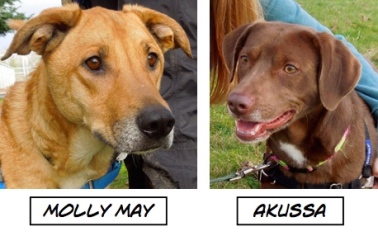 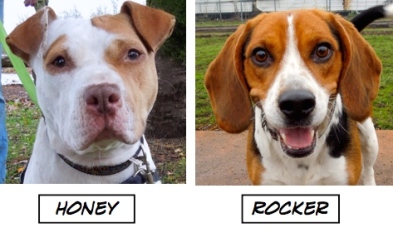 Staff and volunteers were thrilled that long-termer Mommis was finally adopted. She was loved by many. Also, I’m so happy to report that Lily and Daisy, seniors who have been together their entire lives, were adopted together! Here is their going home picture sent to me by staff. Everyone looks so happy!

And there was more terrific news. Summer, a S.T.A.R.T. dog from California, who escaped from her foster home her first night in Oregon and was found 112 days later, was adopted by her foster parents. Such a happy new beginning.

The sun was out, the temperatures unusually warm, and the dogs were talkative during Sunday’s playgroup. Here’s what I overheard.

Lillith and Molly May became best friends and enjoyed romping with each other. However, the old “grass is always greener” saying seemed to fit this photo that I took from the small-/shy-dog yard.

Cookie and Firefly are a bonded pair who need to be adopted together. Staff member MaryAnn snapped this picture while I was in the other yard. 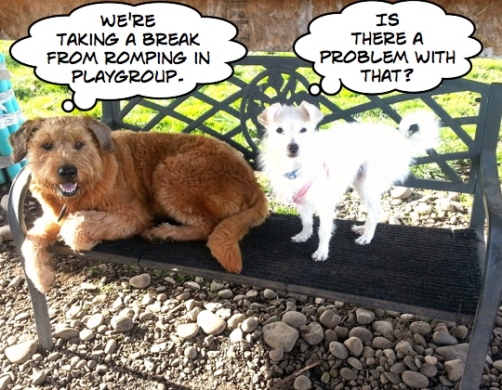 If there was any question in my mind of how bonded they are, it disappeared when I tried to get a shot of just Cookie.

Lillith, a wonderful “let’s race” kind of girl, decided Bishop would be a good challenge. 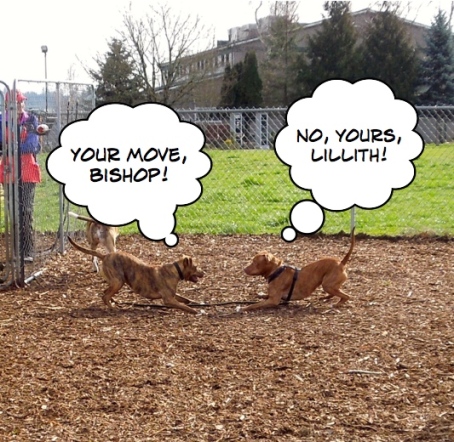 After all of our rain, it was so nice to see the sun! BFFs Molly and Lillith were amazed. 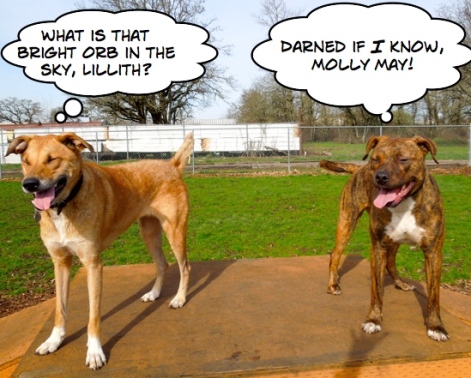 A cone? I actually think I look pretty funny wearing it, don’t you?

There haven’t been too many dogs who are so good-natured about wearing the dreaded cone, but Nashville seems to find it hilarious. He is a one-year-old Lab/Pit Bull Terrier mix who is playful and has a ton of energy. He hasn’t had much training, and would enjoy and benefit from some of our shelter training classes. He was found as a stray, so we don’t know his story, but he’ll make an excellent jogging partner. This young boy scored very well on his behavior assessment and with a little training will make a super new family member. Here he was on Sunday with Alysha. 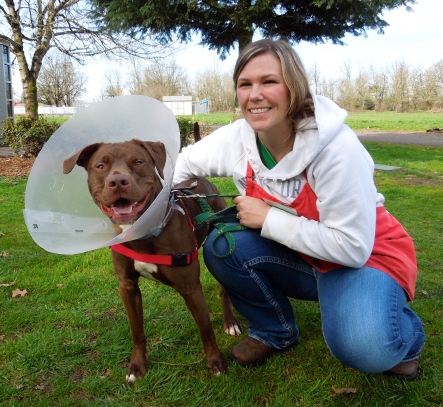 And here he was with Sandra last Wednesday before the cone.

I’m a little shy, but get to know me and I’ll become the best dog ever!

Padme, an eight-month-old Chihuahua/Miniature Pinscher, is quite the cutie with her larger-than-life ears. She came to us as a stray. She scored exceptionally well on her behavior assessment and will be happy in a calm home, as she is a little uncertain about noise and confusion. Since she is still a puppy, she is a great candidate for training classes. She already knows how to sit when asked and took my treats politely. At a mere five pounds, she fits comfortably under Caroline’s arm. 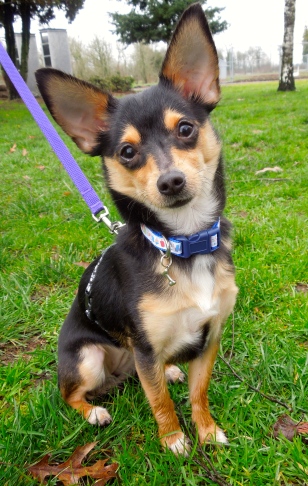 Here was Padme this afternoon with Kathy. What a cutie.

I’m waiting for you here at the shelter, but I’m having a good time while I wait!

Often times when a dog is at the shelter for a long period of time, they become stressed. Not so with our Lillith. Although she’s been adopted three times, once brought back to us as a stray and the other two times returned, she isn’t discouraged. She has just not yet found her perfect family fit. Lillith is a two-year-old American Staffordshire mix. She first arrived at Willamette Humane Society last August as a S.T.A.R.T. (Shelter Transport Animal Rescue Team) dog, brought to us from an overcrowded shelter in California. Lillith is eager, treat-motivated, and full of energy. She walks perfectly on leash using a Halti (head halter) and she has learned to sit and wait at doors until given permission to exit. She takes treats gently. When playing fetch, she will drop the ball at your feet. Lillith loves romping with other dogs and is a rough-and-tumble player. Here she was on Sunday posing with Sherrie.

She agreed to take a brief break from romping with Molly May and pose for me. 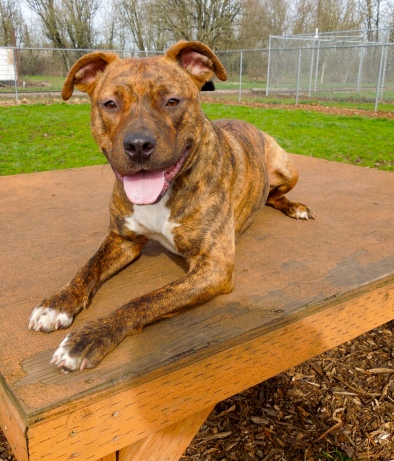 And here she is waiting to greet a new playgroup attendee. She is so appropriate with other dogs that we use her to assess the dog skills of new arrivals. 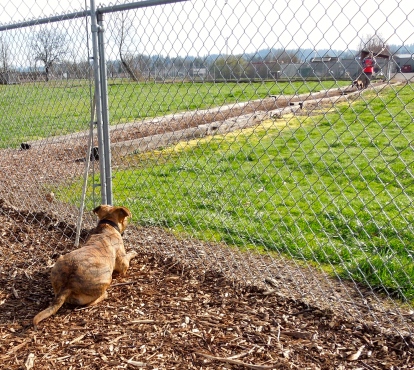 Lillith has become such a favorite of both staff and volunteers and we want her to find her absolutely perfect family.

This afternoon Emelynn decided to take Lillith outside a second time to read to her. However, we discovered Lillith isn’t as much into reading as she is into hot dog bits.

I’m little, but I have a big personality. And I like laps!

Looking for a lap buddy? A youngster who is eager to learn and already knows a few commands? Meet Benito, a nine-month-old Miniature Pinscher/Miniature Dachshund mix. This little guy feels totally at home in your lap, as you can see. He’s alert, playful and quite the snuggler as Jolene found out on Sunday. I have a feeling he won’t be at the shelter for long. 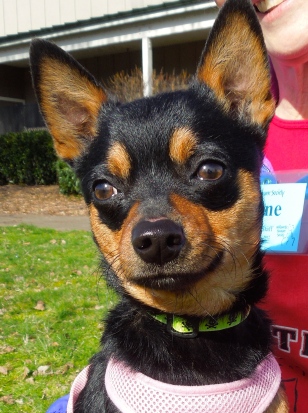 Emelynn’s Picks of the Week!

Here’s another picture that staff member MaryAnn took of these two wonderful pals, Firefly and Cookie, showing their bond. Like everyone else at the shelter, I am smitten with them. They are seniors looking for a retirement home together. Firefly is an eleven-year-old Miniature Poodle/Chihuahua mix and Cookie is a seven-year-old Airedale/Standard Poodle mix. They are gentle, calm dogs who will be happy with hanging out together with you. A stroll around the neighborhood, then a few treats and an evening of snuggling and snoozing will be perfect for these two. They have good histories with other dogs and kids, but are looking for a quiet home now that they are older. 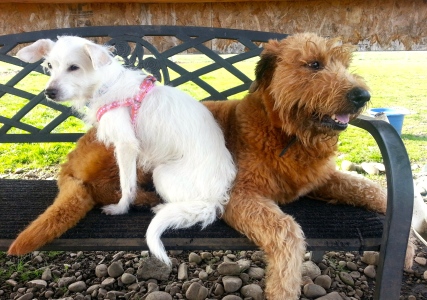 It’s often a challenge to get a bonded pair adopted together. We’re hoping the perfect family will come along soon. 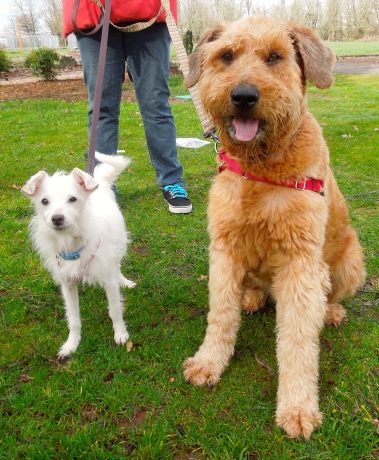 This afternoon Emelynn and I took Cookie and Firefly out to the big yard for some relaxing. We had a good time. 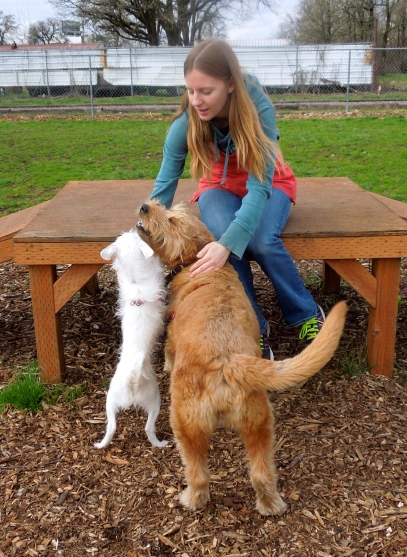 When it was time to go back inside, they happily walked side-by-side to their kennel. 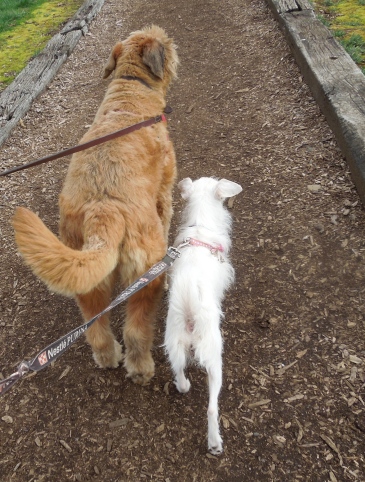 I have a cold at the moment, but I’m still adoptable! Come meet me!

Pip is a two-year-old Pit Bull Terrier mix who is looking for a home without children, since he is sensitive to being over-handled. He loves playgroup and has gotten along great with other shelter dogs. He is very treat-motivated, loved my hot dog bits and knows some commands. Pip is smart, enjoys his time with volunteers and wants to please. While he isn’t feeling his best, he is in the ISO kennels until he recovers from his cold. Caroline and I love the sincere look in his eyes. He is a good boy. 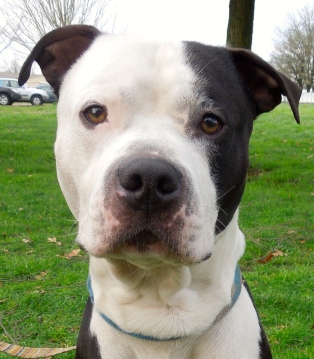 Sandra says I won’t be at the shelter for long. I hope she’s right!

Little Pepe is a four-year-old Papillon mix and is such a cute, gentle little guy. He is a bit overwhelmed being at the shelter and is hoping he’ll soon be snuggling with a new family at home. He does need a little help with house-training, but otherwise he’s just about perfect. He walks well on leash, is treat-motivated, and took my hot dog bits politely. Sandra and I both fell in love with Pepe. 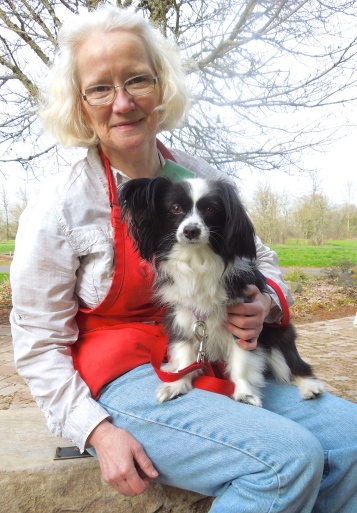 We decided to take him to the big yard. I couldn’t believe how willing he was to pose for pictures. 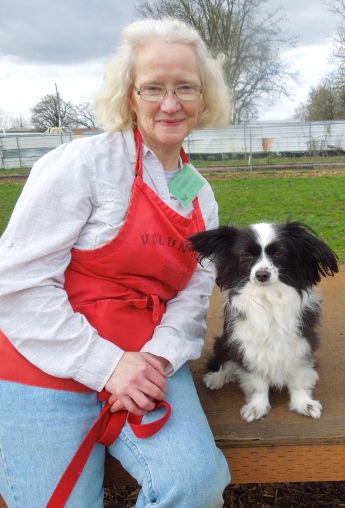 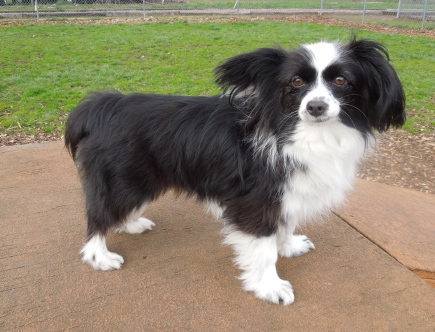 Then it was time to go back in. Pepe had a question for Sandra.

I’m quite shy, but give me a little time and I’ll come out of my shell and love you! And can I be an indoor dog, now?

A newbie to WHS this week is Mitzy, a three-year-old Chihuahua/Italian Greyhound mix. She has been an outside-only dog until now, so will need a patient family to help her with house-training and adjusting to being indoors. She has lived with another dog and loves stuffed toys. Mitzy was very nervous at our first meeting, but after Emelynn spent some happy time with her, she warmed up and enjoyed sitting in Emelynn’s lap. This little girl is a sweetheart and so deserving of a new beginning as an indoor best friend.

Remember Bella? She is a Dutch Shepherd mix. Here she was at WHS last October with Jolene. 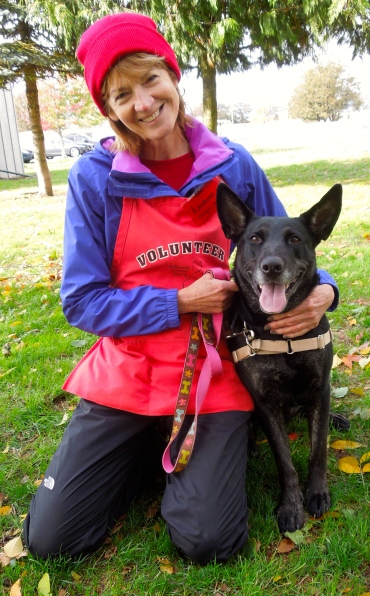 She was a staff and volunteer favorite, but she wasn’t adopted right away. She spent some happy time in a foster home after becoming depressed in the kennels. Then she hit the jackpot of forever homes! Here are some pictures of Bella’s life now. Her family reports she is much loved and is very happy. 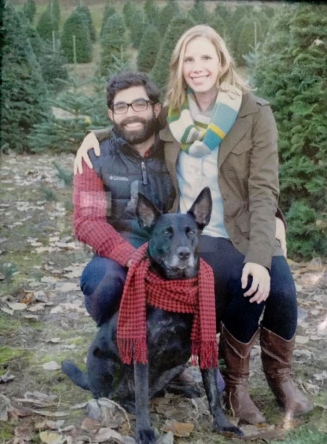 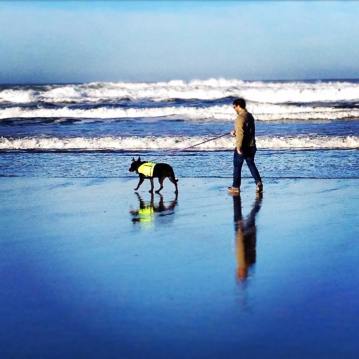 Destiny, originally a S.T.A.R.T.-transported dog from California, became a long-term favorite at the shelter. Here she was with me last July. 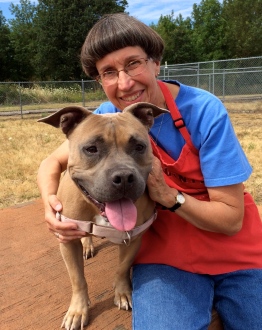 Destiny was adopted twice and returned. Finally, last October, staff member Aubree adopted her. And here is the latest photo of her. Too bad the dog can’t relax! 🙂 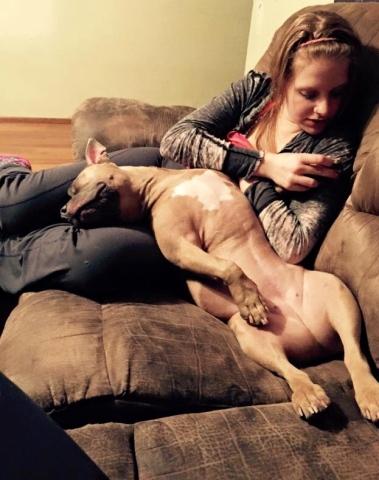