On Sunday we had one of the best playgroup sessions EVER! The dogs were so excited to get out and play with each other and Lillith was a superstar romping and racing with everyone on the rowdy side. More on that and pictures coming up. But first, we had another fantastic adoption week! There were a total of twenty-one dogs who left the shelter for their new beginnings. Among them were these Blog Dogs. 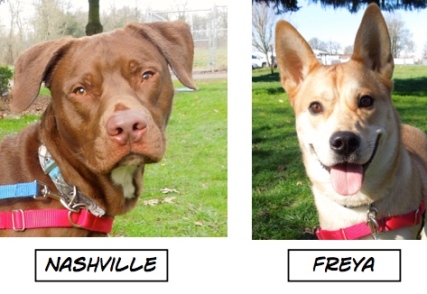 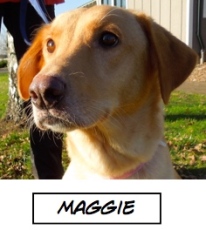 I happened to be at WHS when Bubba’s new family met him. It was love at first sight and I asked if I could get a family shot before they went in to fill out the adoption forms. Bubba was so gentle with the little boy. There is already a cat in the family, so Bubba, no doubt, is learning not to mess with felines with attitudes. 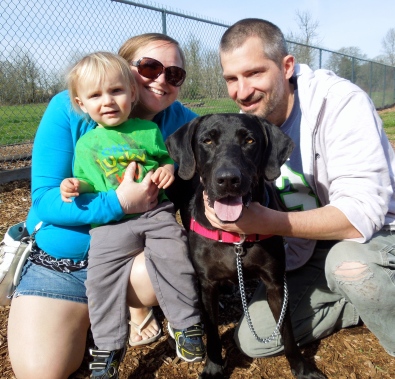 Both the Rough-and-Rowdy and the Small-and-Gentle yards were a hubbub of joyful dog fun on Sunday morning. Here is some of the chatter I overheard, although at times, everyone was talking at once!

The platforms were magnets in both yards. And Sherrie was quite popular. 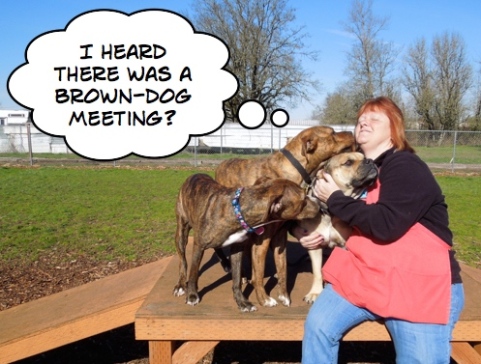 When Pip noticed all the activity, he checked in.

Bubba and Pip had a near collision in their exuberance. 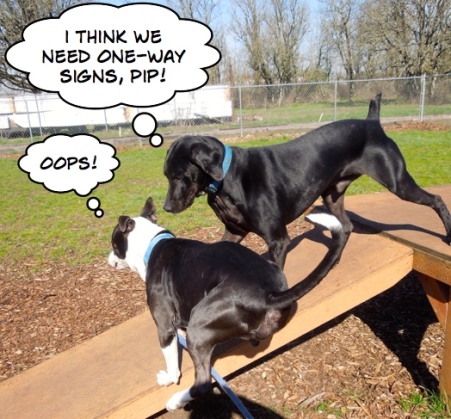 Tara decided it was time to take charge of the playgroup binder.

Meanwhile in the Small-and-Gentle Yard, little Lolita was enjoying some quiet time with Linda. 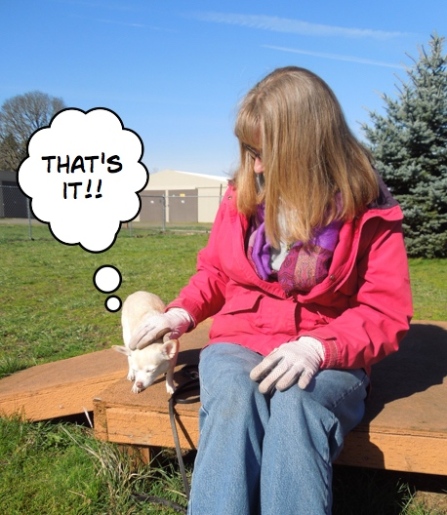 Wallace decided he’d like some of Linda’s attention, too. 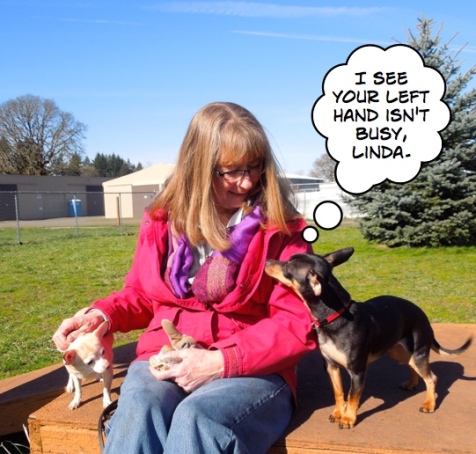 Back in the Rough-and-Rowdy yard, Lillith and WonderEars had a blast and became the very best of friends while Tara and Bubba watched. 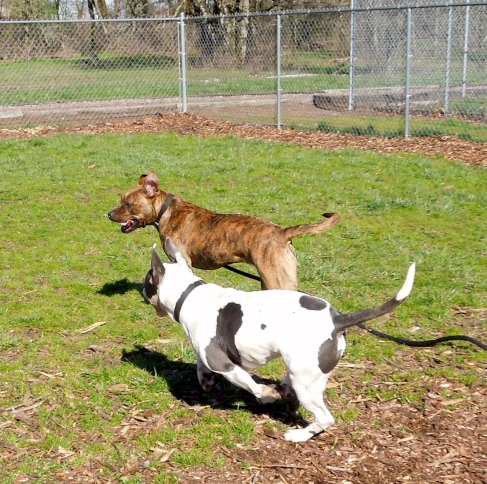 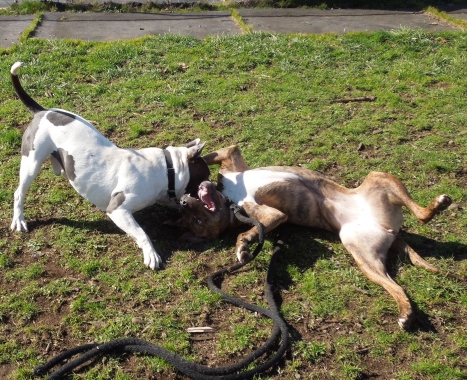 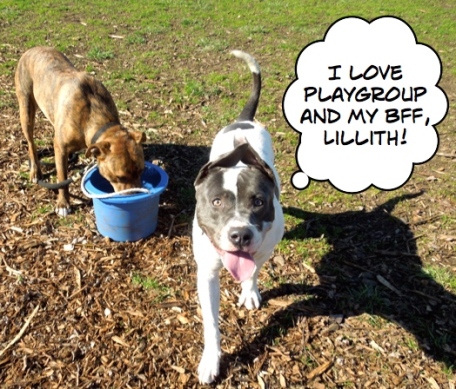 Yes! I had a great time in playgroup with Lillith!

I decided to start this week’s post with this happy boy, Major, a one-year-old Rottweiler/German Shepherd mix. At 77 pounds, Major is a giant puppy. He is working on improving his manners and since he’s highly treat-motivated, he’ll be a quick learner. He loves my hot dog bits and while I expected him to take them roughly, he was quite polite. He knows several commands already and would thoroughly enjoy our WHS training classes so that he will become the perfect gentleman he wants to be. Major is looking for a family with older kids because of his size, and one which is as interested in going on adventures as he is. Hiking? Running? Mountain climbing? If you want to try it, so does he! I’m hoping that he won’t have to wait too long for his new family. Here he was on Sunday with Francis. 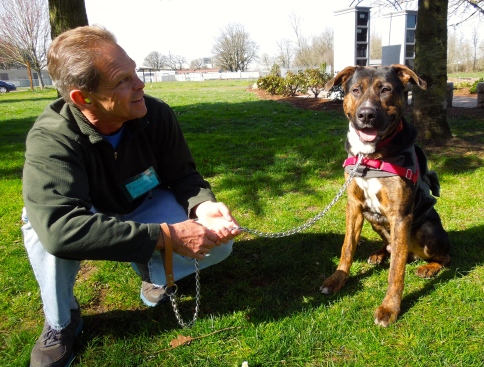 Here he was racing with Lillith Sunday morning.

He happily posed for a picture with Sherrie during a break from playgroup romping. 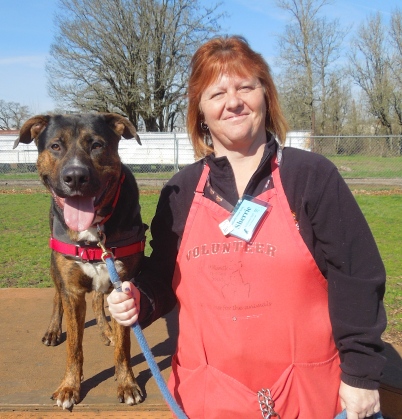 You know how big Major is? Well, I’m not that big.

This little girl is Lolita, a six-year-old, six-pound Chihuahua mix. She is an adorable little dog who was nervous with all of the other small dogs in playgroup. Afterward, she enjoyed some time with Ian. Lolita is house-trained and a cuddler. I have a feeling she won’t be at the shelter for long. 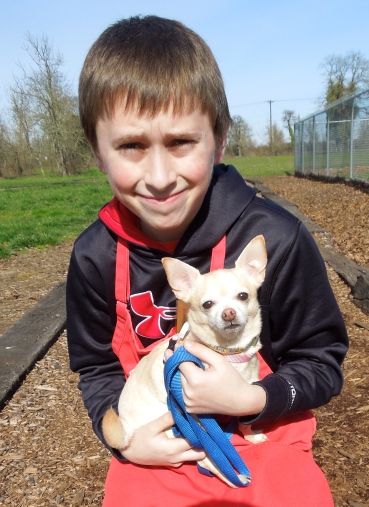 Lolita was spayed this week and was so embarrassed by her cone, she had to be coaxed out of her kennel this afternoon. Caroline and I both reassured her that she looked just fine and the cone was temporary, but we’re not sure we convinced her.

Are you looking for a little best friend? I’d like to apply for the job!

Penelope was adopted last week, but it wasn’t quite the right fit and she was returned the next day. We’re hoping that her next family will be perfect for her. Penelope is an eight-month-old, six-pound puppy. The world is a really big place to her and she needs a patient, understanding, and calm family to help build her confidence. She loves to sit in your lap as you can see with Alexis on Sunday. I’m hoping she’ll soon be in the lap of her new person. 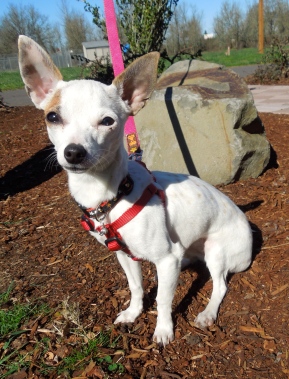 Do you recognize me? No? It’s ME, Lillith!

If Lillith can’t play with her friends, she has fun with a tennis ball. I happened to see her out with Jeff Sunday afternoon and she didn’t look a bit exhausted from the morning rough-and-rowdy play. She can be such a clown! Lillith is a two-year-old American Staffordshire mix. She is well-loved at the shelter where she has been waiting for just the right family for a long time.

Little Ruthie was in no mood to smile at me on Sunday after having been spayed. Hence, the cone. This little girl has the most expressive face! She is a two-year-old Chihuahua mix and she’s looking for a family who will treat her like the princess that she is. Diane is one of her fans and enjoyed spending time with her, even though Ruthie was a bit grumpy about being a conehead. 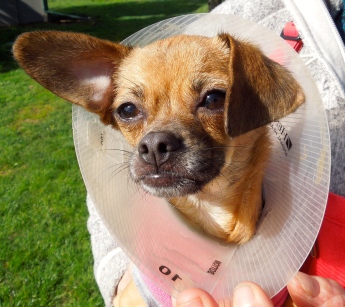 So take the picture already! I want to go PLAY!

This is Linus’ serious look when he just wants to be done with pictures so he can be on his way to the yard. This handsome boy is a two-year-old Carolina dog/Kelpie mix. He is smart, eager, and looking for an active family to adopt him. Here he was with new volunteer Daniel.

Just before I left the shelter Sunday afternoon, I happened to see Linus out with Colby and his mother, Alysha. They were having so much fun. We’re all hoping Linus will soon have his own family to romp with!

Lillith is my very best friend. I do really enjoy playgroup romping!

You’ll remember WonderEars from Chatter earlier in this post. He is a three-year-old Pit Bull Terrier mix and is a very active boy. He has had little training, and our WHS classes would be fantastic for him to learn manners and have fun at the same time. He is eager, happy, and excited to be alive. He will need an adult home without cats and will need to meet any dog he might live with. His person will have to be up to the challenge of training and have the energy to give this boy the activity he needs. But what a joy he will be! Here he was this afternoon with Caroline.

I’m over my cold! I’m feeling fine and ready to be adopted!

Pip is a two-year-old Pit Bull Terrier mix who is a very sweet boy, though an active one. He thoroughly enjoys playgroups and had a blast on Sunday, as you saw in Chatter above. At 53 pounds, he is strong but walks pretty well on leash. He is treat-motivated and loves my hot dog bits which he took politely. Here he is with Sandra this afternoon. 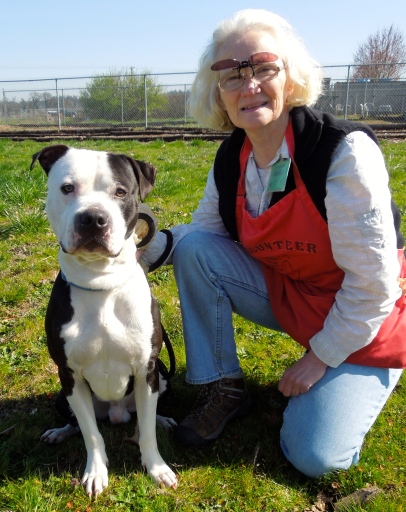 I do tend to take quite a few pictures to make sure I get some good ones, and pretty soon Pip was very tired of posing and let me know he’d had it.

Here he was with Lillith on Sunday, relaxing for a minute between runs. 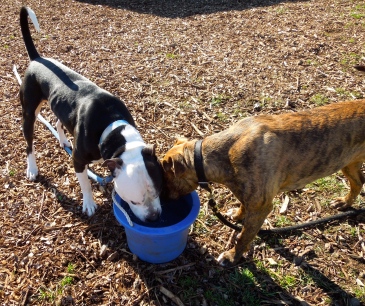 After all of the dogs had been walked this afternoon, I saw that Emelynn had Baby Huey out a second time in the big yard. I didn’t have to ask who her Pick of the Week was. Huey is a one-year-old Pit Bull Terrier mix who is a happy, playful boy who loves people. He’d like to be an only dog in a family so he can have his peeps to himself. He walks well on leash, would enjoy hiking or jogging with his people, and likes to snuggle. He already knows several commands, but would enjoy our WHS training classes to learn more. He and Emelynn had a great time hanging out together this afternoon.

Huey enjoyed helping Emelynn with some of her school reading assignments.

And afterward, it was time for some cuddles. Huey has a hold on him, so we’re hoping he’ll soon be at home with his new family. 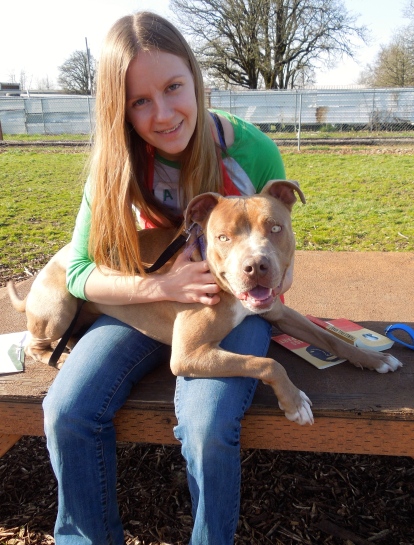