It’s been another busy week at Willamette Humane Society. There were 18 happy dog adoptions including these Blog Dogs. 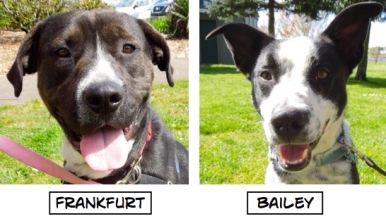 There were two newbies who were adopted just after I took their profile pictures. First was little Jack. The family fell in love with this little guy on the spot. 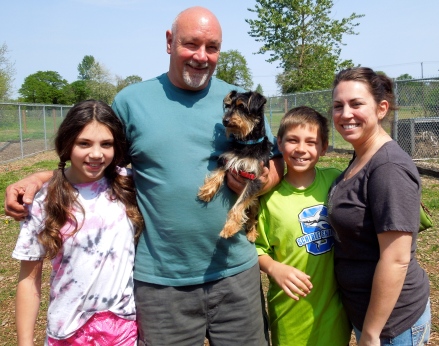 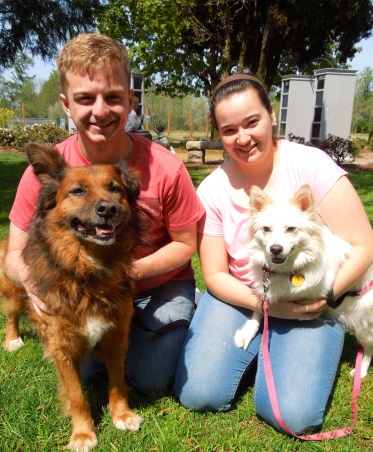 It was another perfect day for dog romping on Sunday morning, and romp they did. There was a lot of chatter!

Even though Sweet Pea is a senior, at eight years old, she absolutely loves to get outside and play with her friends. Such a happy girl!

Pip is such a ham. His pure joy racing with other dogs is great fun to watch. He enjoyed showing off for Sweet Pea. 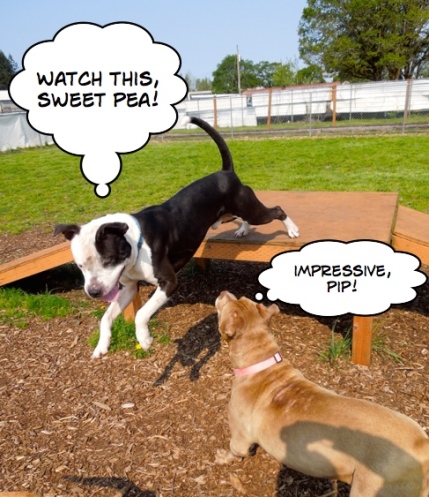 In the mellow-dog yard, Spencer, who has been very nervous at the shelter, found playgroup a little overwhelming. Paula, who had been very shy herself when she came to WHS, tried to be reassuring. She followed him all around the yard trying to get him to play. 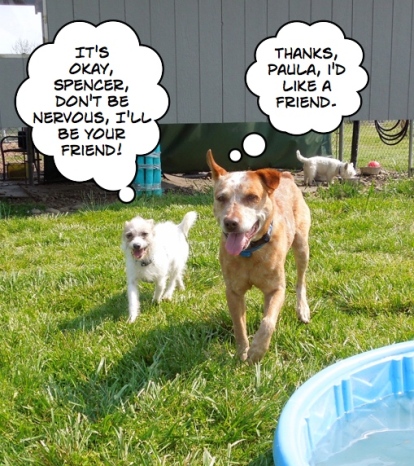 It’s always interesting to watch the interactions between the rowdy and the mellow yards. 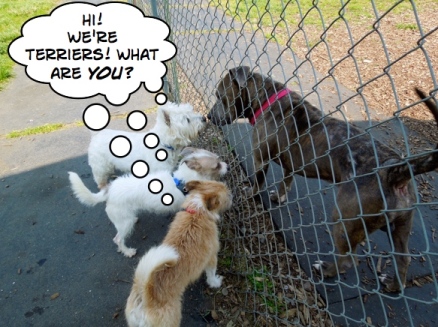 There are some dogs who have a very distorted view of their size…one of them is Sage. 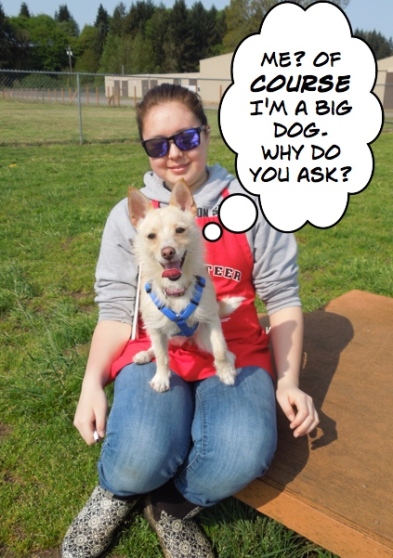 One last picture from playgroup without chatter. It amazed me that Cecil decided to take a nap next to Ali while there was action all around him!

I’ve been here a long time. If you could just see me in a home!

Rosco has been at the shelter since early March. I first wrote about him in my March 11th post. At that time, I said,

I met Rosco for the first time on Sunday after he was returned by his new adopter because it was quickly discovered that Rosco cannot live with cats. So, if you have a cat-free home, and are looking for a cuddly, smart, and eager boy, Rosco might be the right fit for your family. He is house-trained and already knows a number of commands, including sit, roll over, shake, and get in the car, to name a few. He is playful and listens well.

And he has such a great smile!

I was sure he would be adopted again quickly, but he was not. He does not have the best kennel presentation (something he’s not proud of and trying to improve). But he is the perfect example of why one should not make a quick judgment about a dog based on his behavior in a shelter. Volunteer Ashley has taken Rosco home on several respites and wrote the following glowing report for this post.

“Rosco is a two-year-old American Pit Bull Terrier who I have fallen in love with! I have brought him home on three different occasions and I was amazed from the first time how well-mannered he is. He loves squeaky toys and just being in the house with people. He continuously smiles and he loves to give kisses! When he comes to my house to visit he spends time with seven kids ages 16 – 9 and he does amazingly well with them. He loves to play and run around outside with them, as well as have a great time playing with my 11-pound Pomeranian. He is completely house-trained and goes to the door when he needs to go potty. He craves attention and loves to give affection back! He would make a great addition to any family!”

And here are Ashley’s pictures to prove her points. 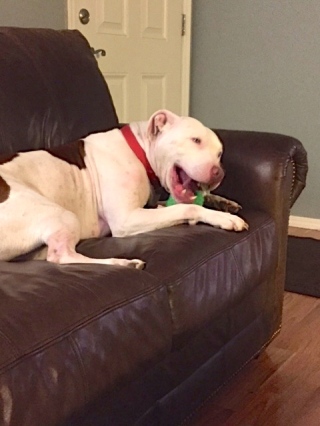 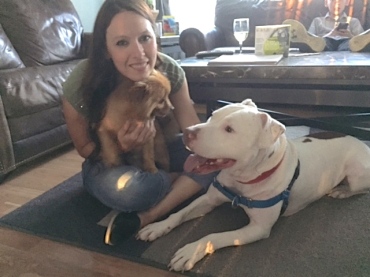 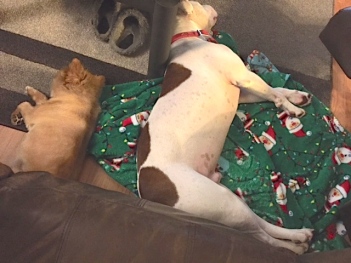 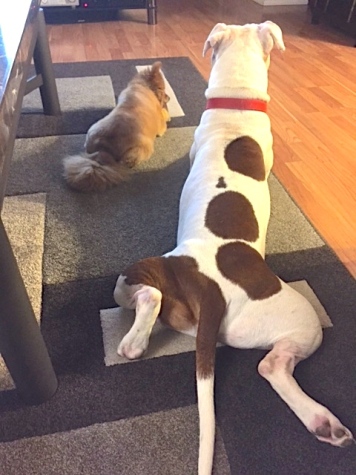 Rosco hopes that his forever family will find him very soon. Here he was with Daniel on Sunday. He really does smile all the time. 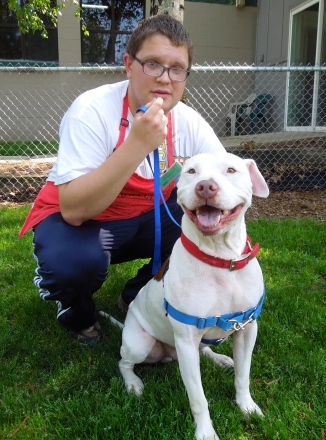 I’ve been at the shelter a long time, too. I can’t wait to go home with you!

Coco Pebbles is another one of our long-termers. He is a three-year-old Chesapeake Bay Retriever/American Staffordshire mix. Coco has been at WHS since early March. He is active, smart, and food-motivated. Here he is with Tyler on Sunday.

Volunteer Jolene has been working a lot with Coco to improve his skills and his ability to settle quietly. Jolene says that because Coco is so highly treat-motivated, he learns new things very quickly and has improved a great deal since arriving at the shelter. I spent some time sitting with Jolene and Coco last week and all Coco wanted to do was lean up against me for scratches and treats. Here he is “settling” with Jolene.

I haven’t had an easy time, but I’m getting better and ready for a new family!

Meet Cindy Lou, a ten-year-old English Cocker Spaniel who is looking for a retirement home to settle into. She is calm, quiet and such a sweet girl. When she arrived at WHS, she had ear infections which are being treated and she’s on the way to recovery. She also was badly in need of a haircut. She looks so much better now!

Here she was with Kathy last week. 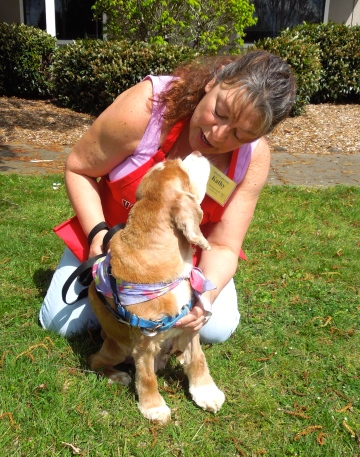 Having just gotten spayed, Cindy had to wear a cone, but it didn’t seem to bother her much and with her ears feeling so much better, she was all smiles. Here she was on Sunday with Kylie. Cindy has made many friends at WHS, but is hoping for a real family of her own.

Want to goof around? I’m your boy!

Pip is such a fun dog! Even though he’s been at the shelter since January, he remains an eager, happy boy. Pip is a two-year-old Pit Bull Terrier mix who, as you learned last week, does wonderfully in a home environment. His only fault at WHS is what is called “demand barking” which means, “Look at me! Look at me!” when he sees people coming down his row of kennels. It’s only a shelter fault, however, as he is very polite in a home. Here he was on Sunday during playgroup. 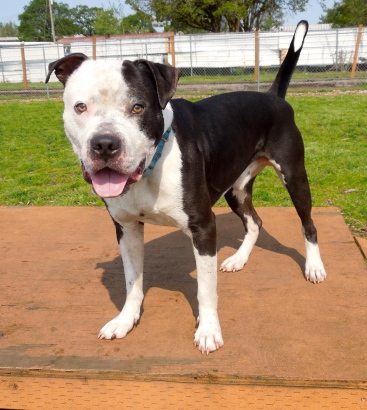 Later in the afternoon, Daniel took him out for a walk.

Being the goofy guy that he is, this is what Pip did when he was returning from his walk and he saw me with my camera.

Pip went to a foster home this afternoon. We’re happy he’s having a break from shelter life. But he is still available for adoption!

Emelynn and I both have a new favorite. His name is Spencer and he is a six-year-old Australian Cattle Dog mix. He came from California through our partnership with S.T.A.R.T., so we don’t know his history. When he arrived at the shelter, he was extremely stressed and shy. But he is gradually gaining confidence and last Wednesday he had a very happy time with Emelynn and me in the big yard. 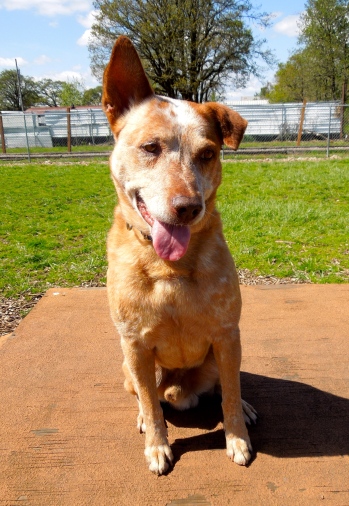 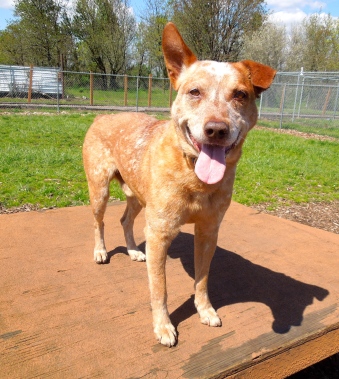 He LOVED rolling around in the grass.

I took him out to playgroup on Sunday, but he really didn’t enjoy it a lot, paced and didn’t fully relax. Later in the afternoon, he went for a walk with Kylie. The shelter is an especially stressful place for shy dogs, so we’re hoping Spencer gets to go to his forever home soon.

Sweet Pea has become such a favorite of so many at WHS! This eight-year-old retiree is someone’s perfect best friend. Looking for a couch potato who has short bursts of energy and enjoys brief romps with other dogs? Sweet Pea is just that. She’s an affectionate, low-key, but playful girl who wants a family to call her own. She is house-trained and walks well on leash. She’s good with kids and enjoys simply being next to you. Here she was on Sunday with Katie, one of her many fans.

I’m new and really hoping for a forever family finally!

Clark came to us from another shelter where he had been waiting to be adopted since November after being found as a stray. It is wonderful when shelters work together to help dogs get forever homes. When a dog has been at one for quite awhile, sometimes all it takes is a change of location for a new family to be found. We’re hoping that that will be the case with Clark, a two-year-old Lab/Pit Bull Terrier mix. Caroline and I met Clark for the first time on Sunday. We were both impressed with how smart this boy is. We discovered he already knows several commands like sit, down and shake. He is eager to please and very people friendly. He does not seem to feel comfortable around other dogs, so would do well as an only pet. But what a great friend he will become!

They’ve changed my name but not my ears!

I’ve written about this boy in several posts. He is another one of our S.T.A.R.T. transfers from California who is looking for an experienced family. His name was WonderEars, but is now Wonder Dog. Most of us just call him Wonder. He is smart and treat-motivated with a mind of his own. With positive, consistent, and patient handling, Wonder is a delightful character. Volunteer Linda has been spending quality time with this boy and on Sunday I watched as he demonstrated how he’s learned to listen. Wonder is a three-year-old Pit Bull Terrier mix. We’re hoping that Wonder won’t have to wonder if he’ll find a home much longer. 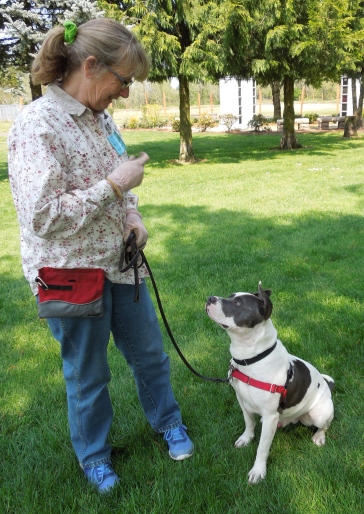 Learning to “leave it” is not easy! 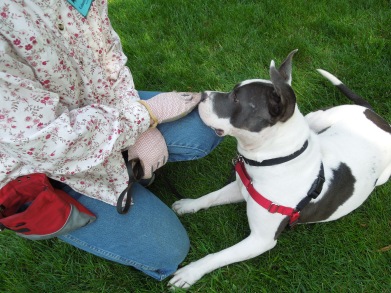 This afternoon I took Wonder out and Emelynn came along, too. We reviewed “leave it” and he did quite well! 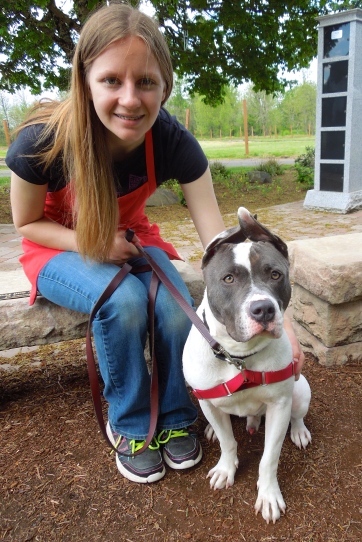 I’m a youngster and I can’t wait to have adventures with a new family!

I met Ben this afternoon and was so glad I did! What a delightful one-year-old Border Collie/American Bulldog mix he is. Jolene brought him out for pictures and then we decided to take him to the yard just for fun. 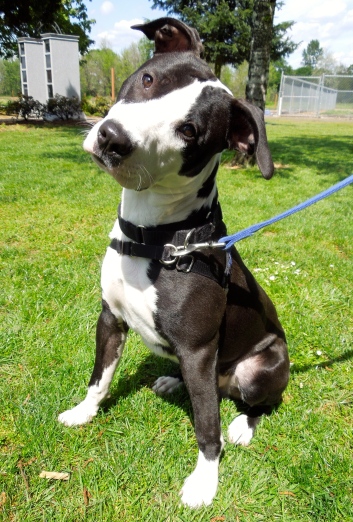 It didn’t take long to discover he is a “ball dog.” He loved to chase a tennis ball and then brought it back and dropped it at my feet.

He’s such an eager boy, and his adoption even comes with a training class so that he’ll learn how to be the perfect family member!