Fall is in the air, though today it seemed that summer was back with temperatures in the 80s. The trees are starting to turn and another school year is beginning. Meanwhile, we have shelter dogs still in need of loving homes. We had some terrific adoptions over the last week, eleven dogs in all, even though WHS was closed on Monday. Here are the Blog Dogs who found new families.

Jolene’s new Swim Dog, eight-year-old Daisy Duke, was adopted so fast I didn’t even get to introduce her to you. But since I have her swim pictures, I decided to include them in this post. Here Daisy was, posing with Laslo on Sunday for what all three of us thought would be her blog pictures. Instead, she is settling happily into her new family. 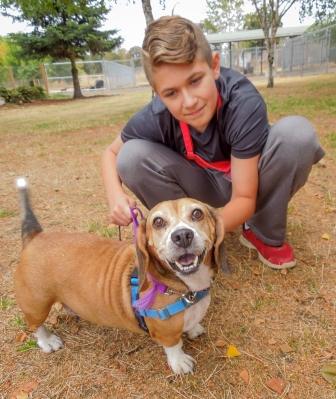 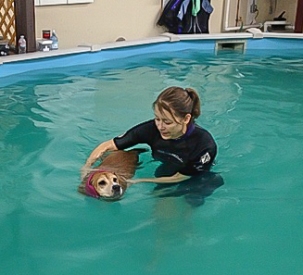 Caroline’s Picks of the Week!

I first wrote about these girls last week. They are a very bonded pair of twelve-year-olds who have lived together their whole lives. Zoe is a Basset Hound mix and Sadie is a Chihuahua/Beagle mix. They have become such favorites at the shelter and Caroline and I are both big fans. Zoe has some arthritis in her legs and is undergoing some bloodwork to see how she can best be helped. They have a hold on them, so we’re hoping they will go home once the medical tests are completed. Today Caroline and I took them out for some quiet time under the trees, then some yard time. 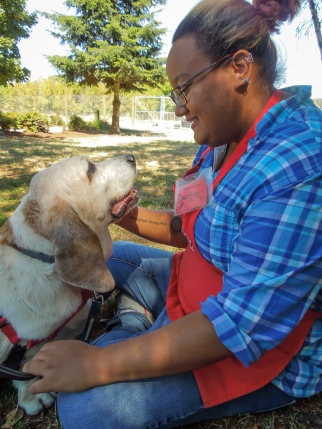 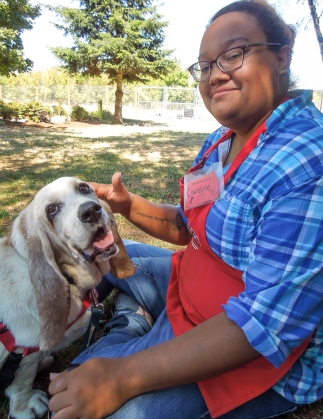 I wondered why Zoe’s ears were wet when I got her out of her kennel. Then I saw this… 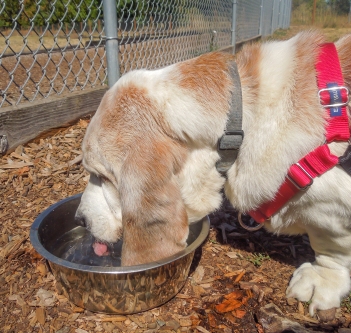 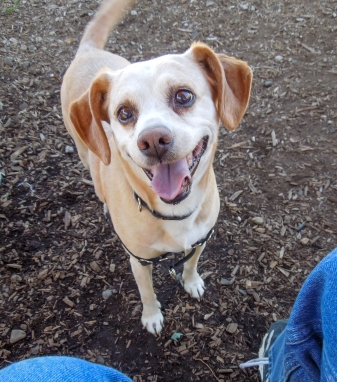 Athena is a two-year-old Pit Bull Terrier mix. She came to us from one of our shelter partners where she was well-loved, but no one adopted her. She’s hoping that her perfect person will find her at WHS. Here she was on Sunday with Linda, one of her biggest fans. 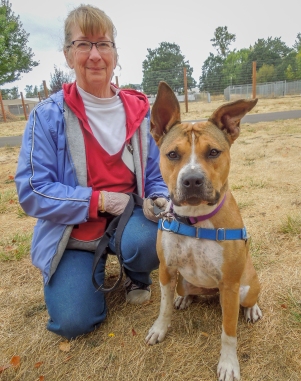 When Athena first arrived, she was extremely shy and nervous. After giving her a couple of days to settle, Marianne and I took her out to play some ball and play she did! We discovered that Athena is a wonderful fetch player. She can get mouthy when excited about the game, so needs to work on her impulse control. She is such a smart and treat-motivated girl that our rewards-based training classes at WHS would be terrific for this high-energy, delightful dog. Here are some shots soon after Athena came to us. She wore a Thundershirt to help make her less anxious. She knows some basic commands and will make the right person a wonderful, active teammate, ready for adventures. 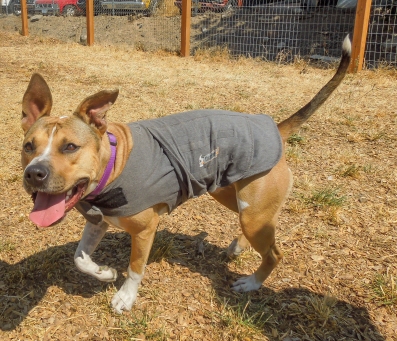 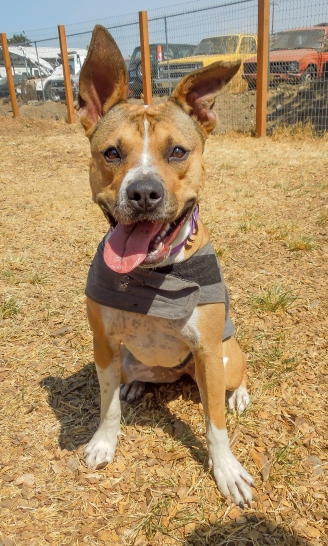 This is week four of the adventures of Daisy-Head Mayzie (you can call her Daisy) and Laslo. Daisy is a two-year-old Pit Bull Terrier/Australian Cattle Dog mix. I first wrote about Daisy in my June 24th post soon after she arrived from California. Laslo fell in love with this sweetheart soon after. We can’t believe she hasn’t been adopted yet. The fact that Daisy hasn’t become overly stressed from being in a shelter environment for so long is a testament to her character.  WHS classes would be perfect for this eager-to-learn girl. Daisy will need a home without cats and with older kids or adults, as she is very energetic. She is a typical active, playful young dog. With positive training, she’ll grow into a well-mannered, wonderful best friend. 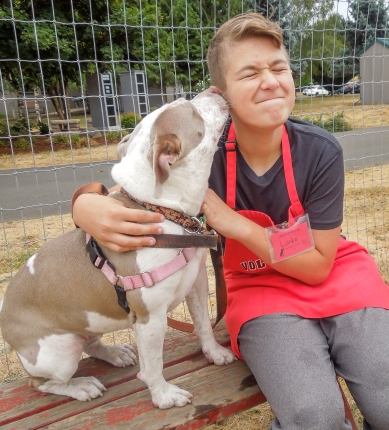 Sometimes a girl is just not in the mood to run after a tennis ball.

Sometimes it’s just time to sit out the game!

Prada is a four-pound, two-year-old purebred Chihuahua. She is shy, but once she gets to know you, she warms up, as volunteer Allie discovered. She has lived with children well, but older kids would be best due to her timidness. She has lived mostly outdoors and really wants to be an indoor dog, so will need some help in house-training, which she has started at the shelter. She enjoys snuggling and just hanging out with people once she is comfortable. She has lived with her friend Nina (see below) but they don’t need to be adopted together. 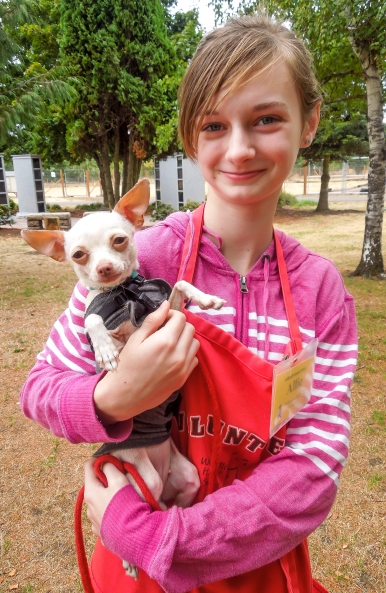 I’m new here, too, and looking for a family of my own.

Nina is a one-year-old, four-pound purebred Chihuahua (long coat). She, like Prada, is timid and easily startled by sudden movements and loud noises. She would do best with older kids, too. And, like Prada, she will need some house-training help also. Nina will need a patient and understanding person to help her gain confidence. Here she was with volunteer Peter on Sunday. 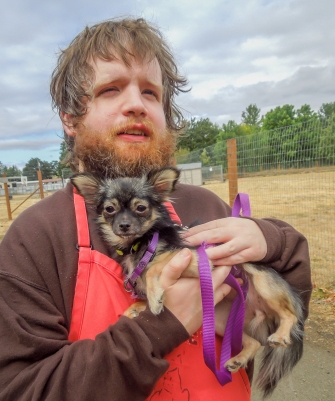 Later on Sunday afternoon, I happened to see Allie and Bianca sitting with Nina and Prada on a bench looking so cute. 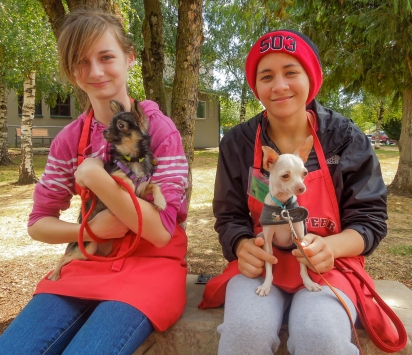 I’m pretty stressed here at the shelter. I hope I get a new home soon.

I introduced you to Tucker last week. He is a forty-five pound, one-year-old Pit Bull Terrier mix. He was found as a stray and transferred to us from another shelter, so nothing is known about his past. He is quite thin and nervous. Being here for a week has been hard on this youngster. He is sad and wants to be with a person. When taken back to his kennel after going on a walk, he cries for a while. He would probably do best with someone who will be home most of the time so that he learns he is safe and secure. He takes treats politely and knows some basic commands. I wish we knew his story before he came to us. Here he is with Marianne and Daniel.

I can’t believe I’m still here! I was sure I’d be adopted by now.

If you are looking for a new best friend in a little dog, meet Nugget, a twelve-pound, six-year-old Miniature Pinscher. This little guy’s owner had to give him up due to the person’s health, but Nugget has obviously been loved very much. He is a bit shy at first, but soon is crawling into your lap and loves to snuggle. He is both calm and affectionate. He has lived a rather sheltered life and not been around cats, dogs or children. So maybe older children or just adults would be good. Nugget is house-trained and loves to go for walks. He really is a delightful little character. Allie has become one of his many fans at the shelter. 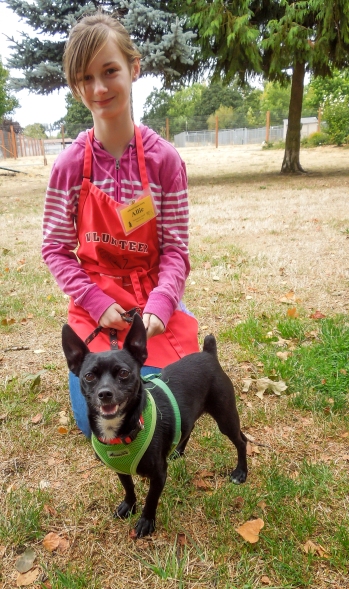 Picture a regular-sized (eighty-pound) Doberman Pinscher. Now in your mind’s eye shrink him down to sixteen pounds. That will be Billy Joel, a two-year-old Miniature Pinscher, and just about as cute as he can be. He’s one of our new ASPCA-transferred dogs from California. He’s a bit shy and would like a calm, understanding person who will help him gain confidence. He knows some basic commands and enjoys being around people. He has quickly become one of Marianne’s favorites. He is an endearing little character. 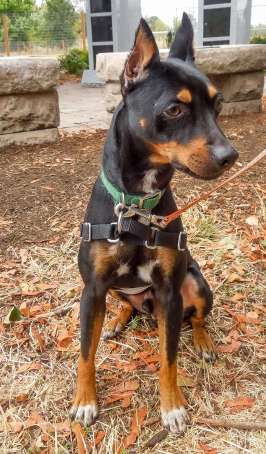 McGruff is an eight-month-old Terrier mix pup who was found as a stray. He weighs 20 pounds and is a sweet-tempered, happy, excited youngster. He already knows some basic commands and is highly treat-motivated, so positive-based training should be fun. He’d love to attend some puppy classes at the shelter. He scored very well in his behavior assessment and seems to get along with other dogs, though he would need to meet any potential canine siblings. He was a little out of sorts on Sunday when I snapped this picture of him wearing the “dreaded cone” after being neutered, and so refused to smile with Bianca. 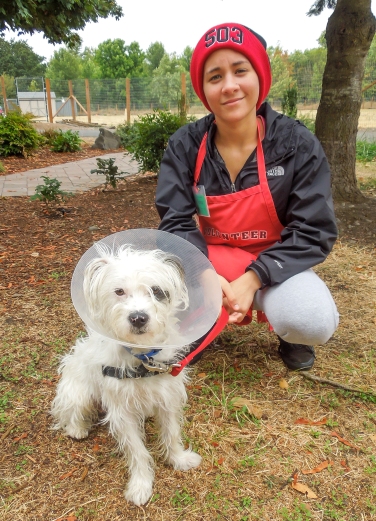 Here he was before the cone. I have a feeling he’ll be adopted quickly.

As you know, last week I had a wonderful update from Houdini’s family. Well, Jacob sent me another picture just for fun and I couldn’t resist putting it in this post. Talk about happy best friends! Pictures like these are treasures to shelter staff and volunteers.

Volunteers will remember this ten-month-old gigantic puppy, Papu, who arrived at the shelter to everyone’s delight. But he didn’t stay long. In fact, he was adopted before I had a chance to feature him in a blog post. 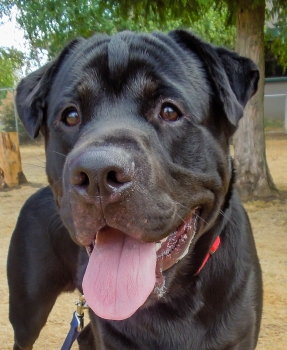 However, I was thrilled when Catherine, our WHS Canine Behavior Coach, sent me this update that the new family had sent to her.

“Just wanted to update you on Mr. Sharpie (formerly Papu).  He is doing quite well.  The boy is super smart and very willing to work…unless he is having a stubborn moment.  He has reliably learned sit, down, paw, kisses, stay, and loose leash walking.  We are working on come (which is difficult for him), leave it and heel.  I started working in my front yard today on stay around distraction and was able to drop the leash and walk away successfully.  His heel work is impressive!!  We haven’t worked on it very much and he is so good at it.  He already knows close, auto sit when we stop and I am able to walk for about 15 steps without having the treat right on his nose.  He is also fully potty trained and crate trained.

He still struggles with counter surfing and general unruly house manners in the evenings.  It’s so funny because when he gets tired he gets obnoxious.  He has successfully self settled for the last 3 evenings though.  He is also sleeping through the night (thank goodness).

Yesterday he was full of crazy energy.  We played fetch for a solid 30 minutes, followed by a serious case of the zoomies up and down my hallway and then a 3 mile walk and he was still ready to go!  Crazy boy.

I am incorporating agility training into playtime in order to tire him out more effectively.  He is very good at the jumps and is learning the tire jump.  He will do the short (3 foot) tunnel but is scared of the longer one.

I have had him at daycare twice and he does well with all dogs…big and little.

The more I get to know him the more I fall in love with him.

Here’s a couple of pics.  I kid you not, the one with the stick…well, he dragged that stick all the way home from a walk one day.” 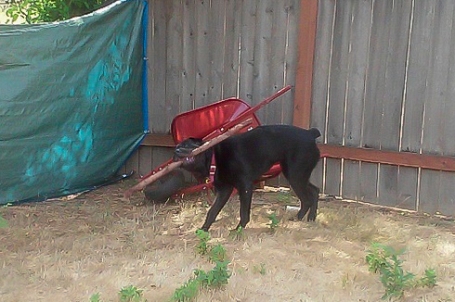 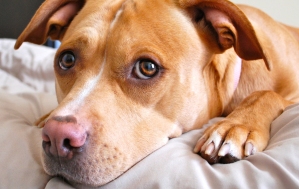