This time of year is always a little slower on the adoption front, as people are caught up in holiday festivities. But even so, there were ten shelter dogs who are now in families of their own. Six of them were Blog Dogs. 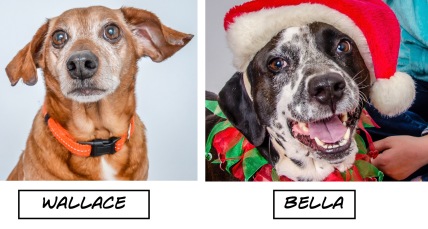 Ira was actually adopted twice in the same week! But since it’s Ira, he wanted to explain it to you himself. 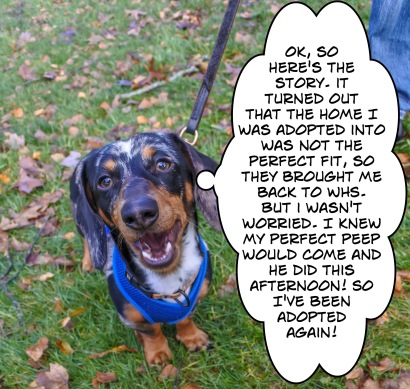 And then there is the Wallace story. I was at WHS on Monday taking more pictures of Shelter Elves with our cats and dogs. Marianne was helping me and one of the dogs we chose (of course) was Wallace, a Doxie mix, one of our favorite seniors. He was such a good boy posing. Shortly after he returned to his kennel, the BEST NEWS EVER happened. A quiet gentleman came to meet him. The man had lost his fourteen-year-old dog recently, had seen Wallace’s picture in the Statesman Journal as WHS’ Dog of the Week on Saturday, and couldn’t stop thinking about him. It was love at first sight. I asked if I could take a picture in the photo room, and they both agreed. Wallace has had some very sad times in his life, but never again!

Sunday was a downpour kind of day and I decided that taking pictures inside was the way to go. The walkers and dogs were happy to pose where it was dry and warm.

We’re sisters and quite devoted to each other. You can adopt us together!

Two of my current favorites are Sarah and Sammie, four-year-old Chihuahua sisters. While they don’t HAVE to go home together, they would surely love to, as they are quite bonded. They are a bit shy, so a calm family with older kids would be best for these two sweethearts. They are house-trained and have lived with another dog and a cat. They are lap dogs through and through. In fact, if there is one person, therefore one lap, they both snuggle in together to share the space. Just about everyone who meets these girls falls in love, as Esme and Caitlin did. Let’s see if we can get these two adopted together! 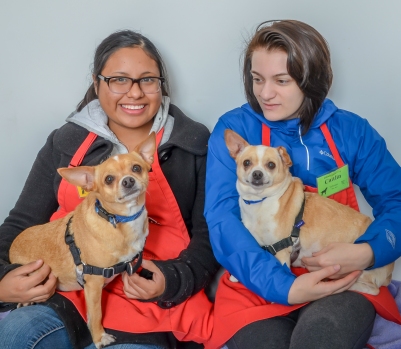 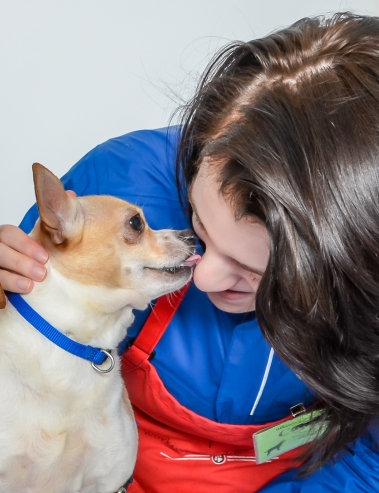 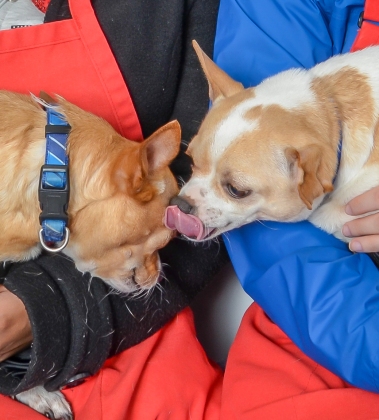 And in case there is still any doubt in your mind about two dogs/one lap, Marianne left me alone with the girls to run an errand and when she came back, snapped this photo. This is how we sat for fifteen minutes while she was gone. 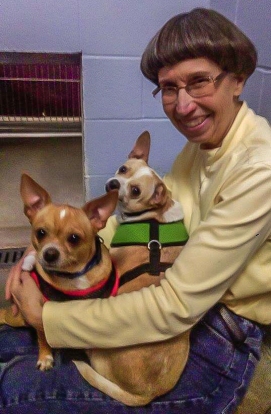 Today one of our long-term former Wednesday dog walkers, Angie, stopped in at WHS to say hi. She now lives in Arizona, but keeps up with our dogs via my posts. I couldn’t wait to show her The Girls, and I knew what they would do…and they did.

Later Sandra and I took them out for their walks. Then we sat on the bench for a few minutes.

I’m new here, just got the hang of things. And now I’d like a REAL home.

Lola is a recent arrival. She came to us through another shelter where she had been found as a stray, so we don’t know much about her. She is a one-year-old Pit Bull Terrier mix with lots of energy. She will need a family with older kids and the willingness to work on positive training, though she does know a few commands already. She is treat-motivated, so training will be fun for both her family and Lola, herself. Here she is with Jolene.

The staff and volunteers love me even though I’m not a youngster. You might, too!

If you are a regular reader of my posts, you already know that I always feature our Shelter Seniors, hoping a reader who might not have thought about adopting an older dog will suddenly realize their appeal. Bo is an eleven-year-old Hound mix. He was adopted from WHS in 2005, but came back to us on December 7th from another shelter after he was found as a stray. He is quite shy at first meeting, but warms up quickly. He is a little happier than when he first arrived at the shelter, and has a spring in his step, but he still is quite sad. He absolutely loves to lie next to a person, stretched out with his back touching you. He wouldn’t be much trouble since his favorite thing to do is just to be with someone. And did I mention, he’s a great listener and is impressed with everything you tell him? Marianne and I spent have spent quite a bit of time lately with this sweet boy. 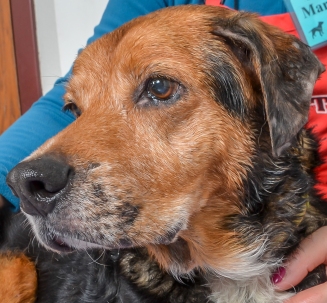 Today, after all the dogs had been walked, Marianne and I spent some time with Bo just hanging out, his favorite thing to do.

No one can believe I’m still here! Let’s get me adopted!

Koda is still waiting for a perfect family fit. She is one of our longer residents, having arrived at WHS on November 7th. She is a five-year-old Fox Terrier mix and she got to go swimming at Bailey’s Journey last week, as she is Jolene’s current WHS Swim Dog. This is some of what Jolene wrote about the adventure: “Koda rode nicely in the car and was friendly and curious toward others (people and dogs) in the pool area and at the pool itself. By her third time in the pool she was swimming like a champ (and is quite a fast swimmer).” Koda also is very smart. She knows wait, sit, and down. She is treat-motivated, loves to learn new things, and a training class is included in her adoption package. She does need a home without children or cats. Here she was on Sunday with her friend, Jolene. 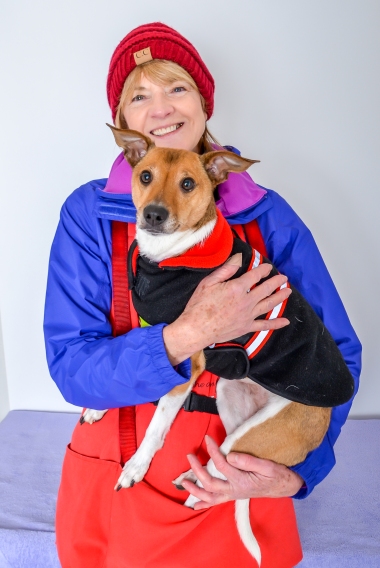 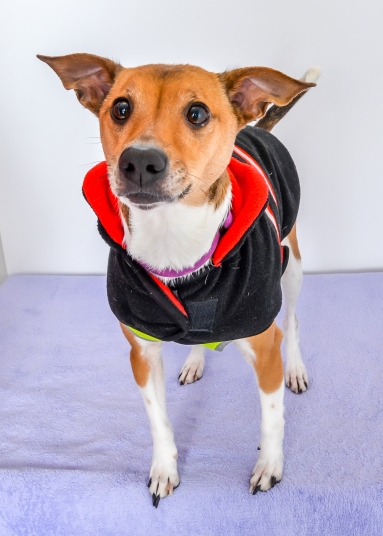 This week Caroline picked a newbie, Austin, a nine-year-old Beagle. He came to us from another shelter where he’d been turned in as a stray. However, Austin was adopted from WHS in 2008. He’s a senior now, but just as sweet as he was when he was young. After spending some quality time with him today, Caroline had this to say about this good boy: “Austin walks very well on leash, quiet until he sees another dog and wants to talk to them. He doesn’t play fetch, but he will chase a moving ball. He’s just super cute. And we saw that he knows some basic commands.” Austin was perfectly behaved for his “photo shoot” and as Caroline noted, he knows both sit and down. For a Beagle person, Austin will be a perfect fit!

On Sunday, after meeting Murphy, Daniel asked if he could have a Pick of the Week, too. I had a feeling whom he wanted to feature—Murphy, a one-year-old Pit Bull Terrier mix. This is Murph’s second time at WHS. He needs a home with no cats, as he wants to play too much with them (which is why he’s back). He’s great with older children and other dogs. He knows several commands, and did wonderfully during our photo shoot. He’s very treat-motivated. He’s also Daniel’s current favorite, both because he’s such a delightful boy and also because he reminds Daniel of another dog whom he loved. Murphy can get quite excited when playing and will need regular exercise. He also would love to come to WHS training classes, so he can get more yummy treats and learn new stuff! 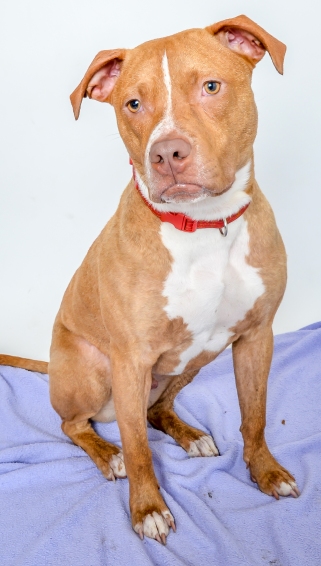 So Martha wanted me to pose on a blanket in front of a photo screen. She said all the other dogs did it. I chose not to.

Some dogs love to pose, others not so much. While Titan agreed to have his picture taken, he wanted no part of silly props. Here’s what his biggest fan, Marianne says about this boy: “Titan is the amazing Shar-pei I came very close to adopting a little over a year ago. In fact, he stayed at my house for a couple of days, and he was so much fun. Sadly he was recently returned to the shelter by the family that adopted him, so let’s get him into a forever home! He weighs about 58 pounds, is nine years old, and is a really sweet guy. He is somewhat aloof as is typical of his breed, but he is really friendly after he warms up to you. He would need to meet any potential canine siblings, and would do well with kids over 8 years old or so. He does chase cats, so a cat-free home might be best. He doesn’t require much exercise and would be easy to have around.” We have noticed that Titan is much happier at the shelter this time than he was the first time. But he would still really like a family to call his own. Here he was with Natalie.

I like to pose in front of the door, looking very stately. 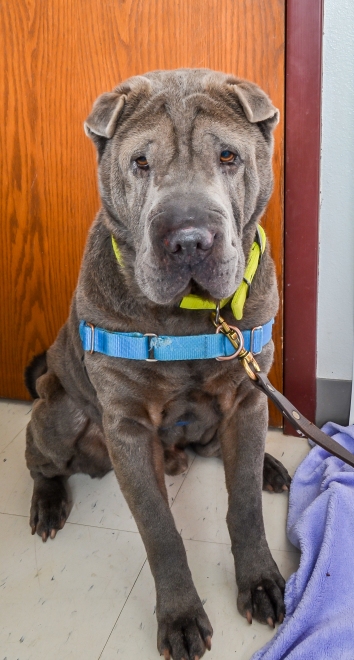 After dog walking today, when I needed to ask Marianne a question, I knew exactly where she’d be, and sure enough, I found her in Titan’s kennel. We decided to take him into a visitation room for some playtime and so I could take some pictures to show his clownish side, something most people don’t get to see when he’s sitting in his kennel. Titan LOVES squeaky toys, playing tug, and fetch (when you throw the toy a few feet). We’re hoping after seeing these pictures, a potential adopter will fall in love with this goofy boy. 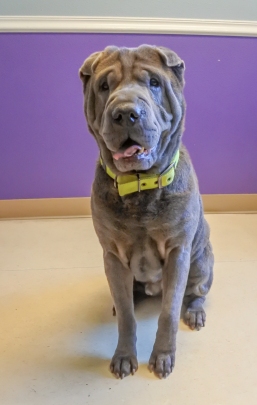 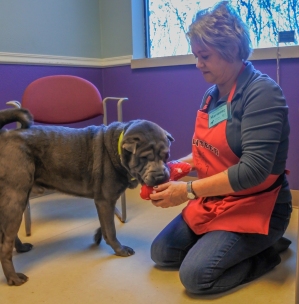 I’m small and quiet. I wouldn’t be much trouble and I would love you to the moon and back!

Pinky is a nine-pound, nine-year-old Chihuahua. He is quite shy and loud noises scare him. He’s looking for a quiet family with older kids who would give him time and patience to gain confidence. He is house-trained and has lived with another dog. He has been overlooked by many potential adopters and we’re hoping that he’ll soon be discovered by his perfect fit of a person. Caitlin is very fond of him. 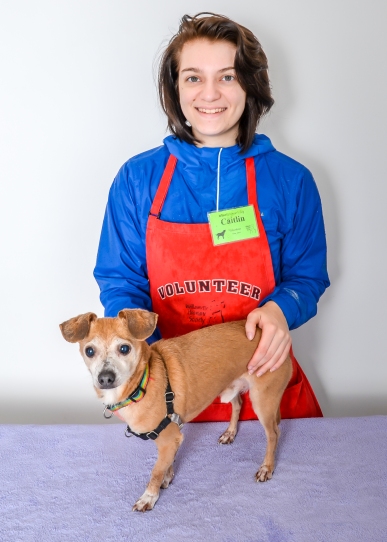 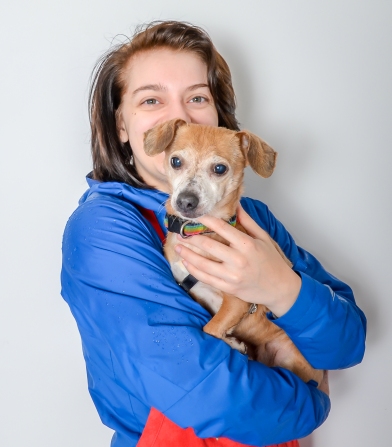 Everyone says I’m just about perfect. I try my best.

This beautiful Collie mix is Jasmine. She is two years old and an exceptionally well-behaved girl. She is calm, affectionate, and quiet. She walks well on leash, loves to run with a person, and has an excellent history with children, other dogs, and even cats. She is a bit timid, so older kids would be the best fit. Jasmine loves treats but takes them gently. Here she was with Jolene this afternoon. 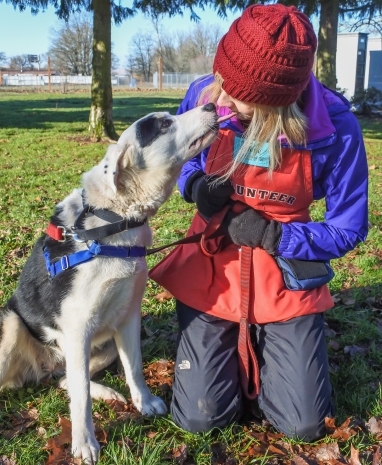 Yes, this is a Dog Blog. However, Marianne has fallen for a cat named Lady Bug and she wanted me to meet her. After I heard Lady Bug’s story, I said I’d write about her on my post tonight. Lady Bug is an eleven-year-old Calico Manx mix. Her person died and so Lady is now at WHS feeling sad and lonely. She is quite shy, and so hangs out in the back of her cat kennel and people pass her by. She is eight pounds, affectionate and house-trained. We’re hoping a cat person will fall in love with this senior and give her another chance at a happy and loving home. She is a beautiful and special girl. 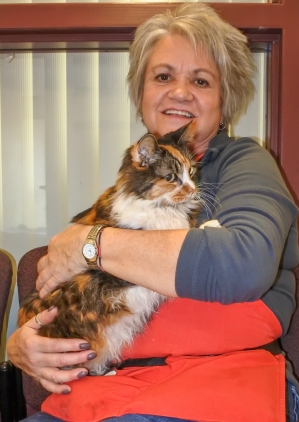 It was the second week of Shelter Elves and another group of caring, helpful, animal lovers and future responsible adult pet owners. 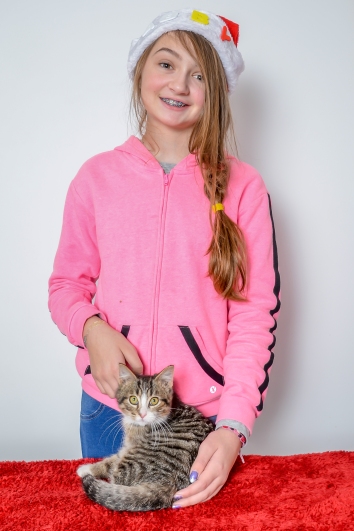 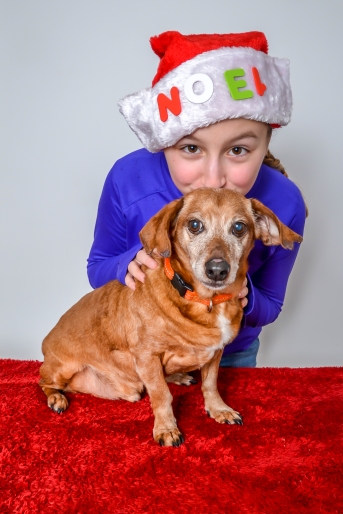 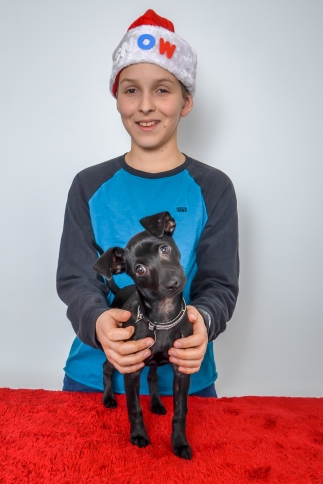 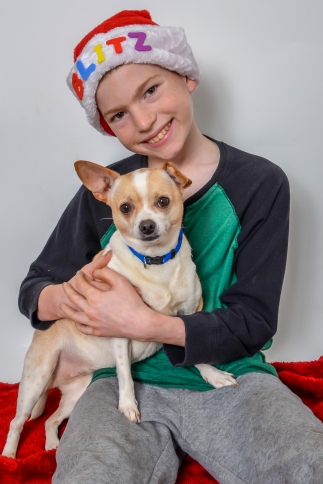 For all of Opie’s fans, I’m very happy to report that his leg surgery went well and he is now back at foster Sherrie’s house enjoying being catered to and recovering. He even got a massage from staff member Sara! 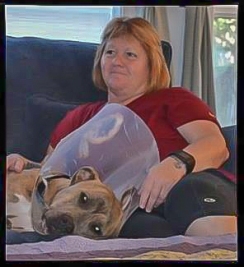 Hoping that every one of our current residents will be adopted very early in 2016! 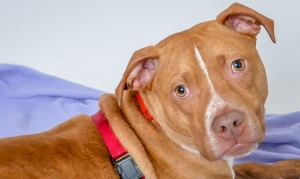