I’m back from a trip to visit family in Michigan and I have some wonderful dog news to tell you that happened while I was away. Several of our seniors and long-termers are no longer at the shelter, but are basking in the love of their new people. Here are the Blog Dogs who are now in their forever homes. 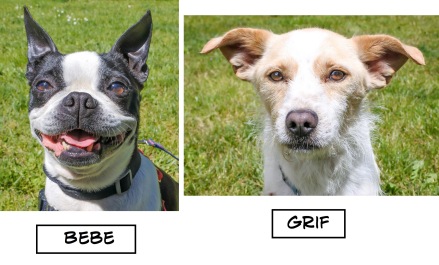 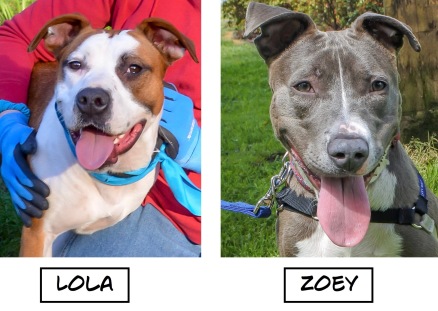 You’ll see some very familiar faces above. Lola and Maisy had been waiting for their perfect people for several months, so there was great celebration when they were finally adopted. Buggy and Chloe needed a retirement home together and finally found the perfect one. And Jax (now Jaxx), our “project boy” who needed just the right person, was found by that person and we are getting stellar reports on his adjustment to a home after six months at WHS. Of course, Jaxx wanted me to let you know just how happy he was when he found out he was going home…

This week’s post will be a little different from usual. Since there are so many new dogs whom I have just met today, I will simply introduce some of them with pictures, their names, breeds, and ages. However, since there are three of my favorites who are still waiting for their forever homes, I will start out with them and remind you why they are special.

I’m back and I need a certain kind of home. If it sounds like yours, could you adopt me?

Otis is back after being adopted for the second time. Neither home was his perfect fit. I spent some time with him upon his return and found him to be the same sweet boy I fell for initially. Otis, an eight-year-old Jack Russell mix, is a one-person kind of dog. He bonds quickly and strongly to one adult (not kids), loves to follow them around, play some ball, and snooze at their feet. He needs to be the only pet for his person. He doesn’t like to be left at home alone, so needs someone who is around most of the time. He is house-trained and knows basic commands. He loves cheese and hot dog bits. He’s not a cuddler (he’s a Jack Russell, after all) but does enjoy being near you. Otis loves to ride in the car and travels well. He is crate-trained. He loves walks and squeaky toys. He doesn’t bark when the doorbell rings, is friendly when meeting people, but wants to live with just his peep. So what is Otis’ perfect home? He would be perfect for a retired single person who is looking for a calm, sweet, well-behaved dog who will be a constant and devoted companion. We know his person is out there, we just need to find him or her. 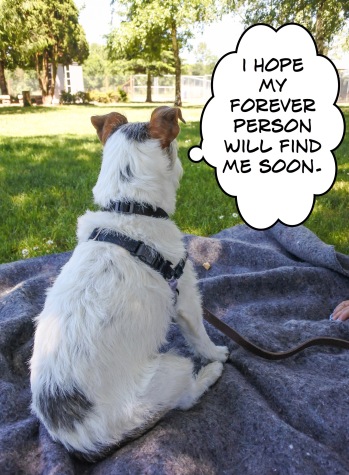 I couldn’t wait to see Otis today. Here he is with part of his fan club, Marianne, Caroline and me, hanging out under a tree.

I went swimming with Jolene again!

Chubby acts like a new dog now that he’s had some dental work done and he feels soooo much better! Just before I left for Michigan, I tagged along to get some pictures when Jolene took him to Bailey’s Journey for a swim. Chubby is a seven-year-old Shepherd mix. Little did I realize that since this was Chub’s second swim, he wanted to tell you about his wonderful afternoon in his own words. So here is “Chubby’s Swim Adventure” by Chubby. Chubby is still waiting for a new family at Willamette Humane Society! 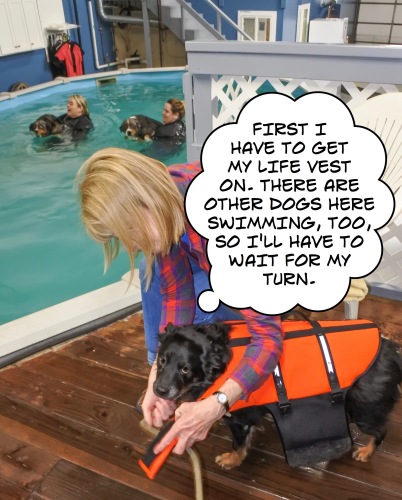 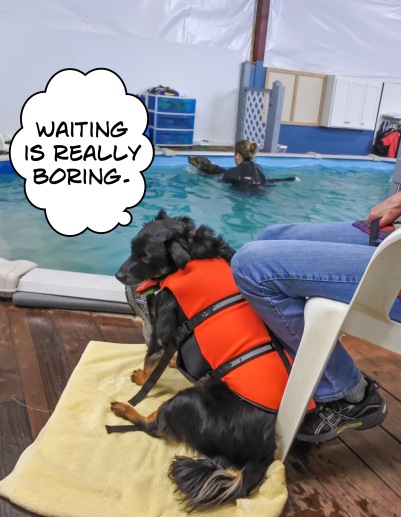 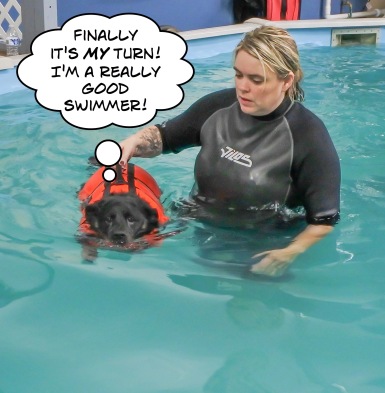 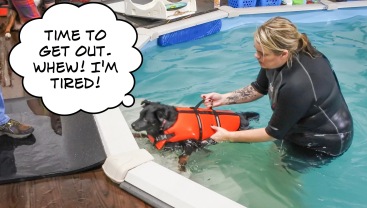 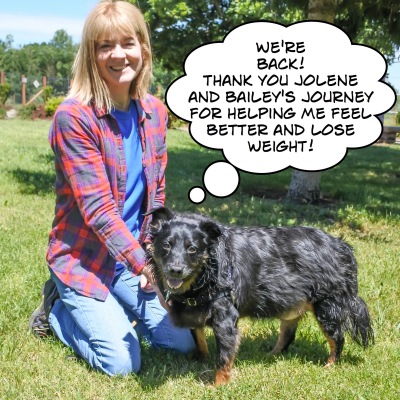 Chubby is feeling so much better since his dental work. Here he was today out for his walk with Jolene.

Overweight? Well, I guess I am a little, but I’m workin’ on it!

Sometimes I fall in love with a new dog instantly. I’m not sure why, but it just happens. It happened with Otis, and it happened with Ledi, a six-year-old American Staffordshire Terrier mix. To say Ledi is a bit overweight is an understatement. This sweetheart weighs a whopping 87 pounds and is looking for someone to help her lose some serious heft. But that doesn’t keep her from being a lap dog…yep, a LAP dog! Ledi is house-trained, loves carrots (good thing!) and playing tug. She needs to be an only dog. Marianne, Caroline, and I took Ledi out for some relaxing time on the lawn the day before I left on my trip. Jolene stopped by. We had such a fun little respite. She took turns sitting in/on our laps. Such a gentle, quiet girl. I am totally smitten. Hoping for a loving home for her very soon. 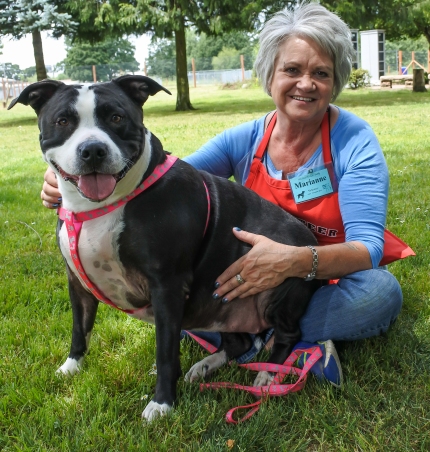 Here Ledi is with her friend, Linda, who has spent some quality time with her while I’ve been gone. Here’s what Linda emailed me about one of their times together. “I’ve been going out and visiting with her the last few days. Acts happy to see me and ready to leave the kennel. She can bounce around and be happy when out. Told her that if she can get in the car we would go for coffee. She was all about that! Jumped, yes jumped in the front seat. ‘Ledi you are going to have to get out and ride in the back.’ Well she squeezed through the front seats to the back. I thought for a second we were going to have a Winnie the Pooh moment, but she made it :)” 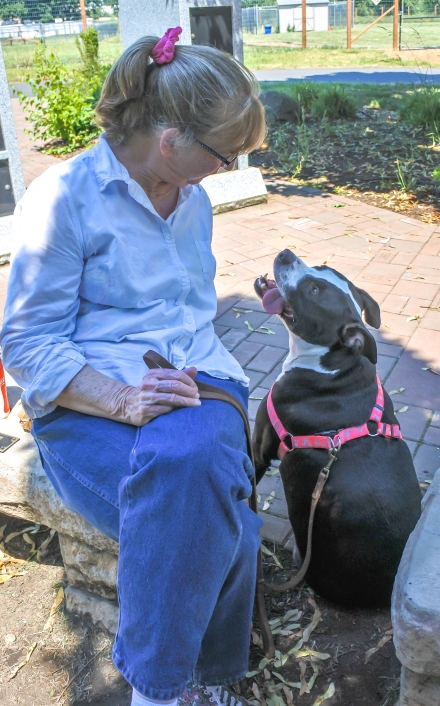 Today Linda came to take Ledi for another ride which she loved! 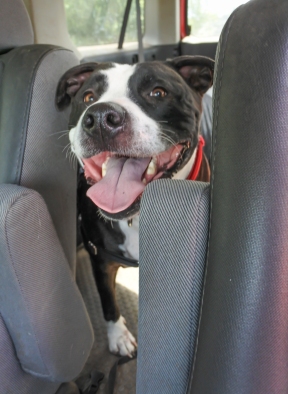 I met a lot of new dogs this afternoon. Since I don’t know their personalities yet, I’ll just give you a brief peek at some of our newbies at Willamette Humane Society. But first, here are a couple of quick shots I couldn’t resist of dogs I’ve featured before in my blog.

I have a best friend named Randy!

Randy is a long, long-time volunteer at WHS. He does everything from showing dogs to prospective adopters, to laundry, to mowing the grass. Today he took a break from mowing to spend some time with Osa, who just had surgery to remove some lumps. I couldn’t resist snapping a picture as they came back from their walk. Osa is a three-year-old Staffordshire/Bull Terrier mix. She would like to be the only dog in the home and is not an off-leash or dog-park kind of girl. She is house-trained and good with older children (PG+8).

Can YOU hold two tennis balls in your mouth at the same time? I didn’t think so!

When I arrived at the shelter, Marianne had Knuckles out in a yard playing fetch and this is what I saw. Knuckles is a five-year-old American Staffordshire Terrier mix. He weighs sixty-eight pounds and is a happy, goofy boy. He came from another shelter where he was not adopted, so he’s hoping that he’ll find his forever people at WHS.

Molly is still serving stray time, so she’s not adoptable quite yet, but will be soon. She is an eight-year-old English Cocker Spaniel, and already has two holds! Kathy fell in love with her today. 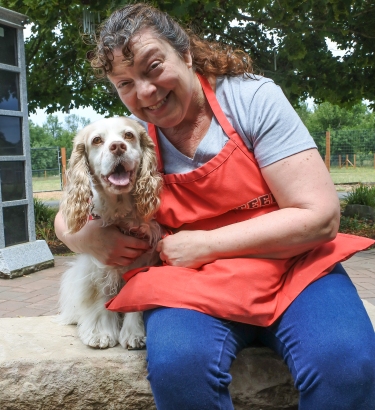 Gibbs is a two-year-old Retriever mix, an active boy and one of Jolene’s favorites. 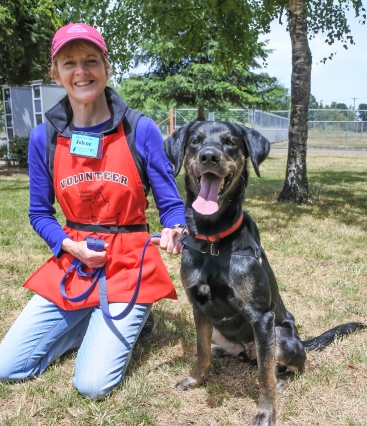 Quila is a three-year-old Staffordshire Bull Terrier mix, here with Marianne, one of her fans.

Austin Payto is a one-year-old Shepherd mix, here with Emelynn. (If you are a long-time reader of my blog posts, you will be as happy as I was today to see Emelynn again. She came to help out with dog walking and pictures.)

Plushy, a one-year-old Terrier mix, has already been pre-adopted, but she’s so darn cute I decided to put her in this post anyway! Marianne couldn’t wait for me to meet her. 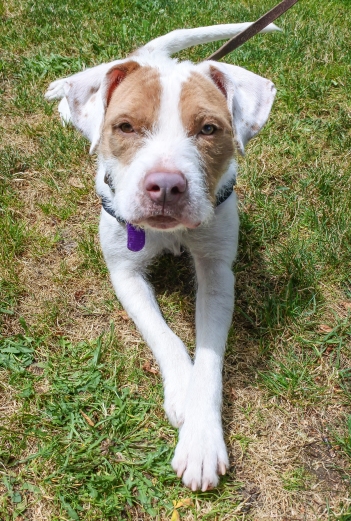 Ruby is a seven-month-old Staffordshire Bull Terrier Mix. Here she is with Jolene.

Toffee is a four-year-old Chihuahua mix. Here he is after his afternoon walk with Caroline. 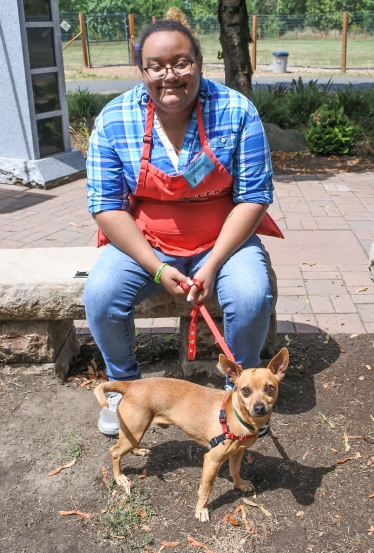 Sam is an eleven-year-old Beagle mix who has been at WHS before. Here he is with Jolene.

Crowley is a four-year-old Brussels Griffon mix who spent some time today with Kathy.

Bella is an eight-year-old Pomeranian mix who smiled constantly with Jolene.

And that’s it for this week!