It’s been another happy, active week at Willamette Humane Society. There have been some terrific dog adoptions, a swimming adventure for Daisy Mae, playgroups, many walks, and some vigorous games of fetch for dogs still waiting for their forever families.

Adoptions this week included a long-term favorite, Gordo, and our sweet senior girls, Katie and Kimmy, who went home together! 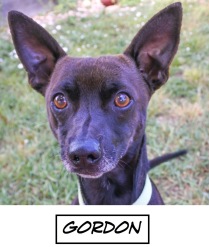 I’ve been very busy since arriving at WHS!

In last week’s post I briefly introduced you to Daisy Mae, a six-year-old Coonhound mix who had just arrived at the shelter. Since then she has been quite busy. She was a “camp dog” for one of WHS’ week-long kids’ day training camps. Last Friday Daisy Mae got to go swimming with volunteer Joan at Bailey’s Journey and here’s Joan’s report: “This was Daisy’s first time swimming and oh! What a splash she made!! She was very fearful of going in, but once in, she seemed to really enjoy it. She also made some nice friends while swimming and behaved beautifully. I think she is ready for another swim!!”

Daisy Mae has quickly become a favorite at the shelter. She is an affectionate, gentle, easygoing girl. She gets along with both big and little dogs. She even tried to befriend little Trooper, a newbie who was very frightened during his first playgroup. Daisy Mae is treat-motivated, walks well on leash and knows basic commands. She will make some lucky family a wonderful new best friend! Here she was on Sunday with one of her many fans, Caitlin.

Caroline and I couldn’t stop laughing when we met this joyful, goofy youngster. Toby is a six-month-old Shepherd mix who is still learning how to make his gangly legs move in synchronization. Toby already weighs sixty-two pounds, so is going to be one BIG boy! He is house-trained and knows basic commands. Since he is highly treat-motivated, he is a quick study and would love the challenge of training classes here at WHS. 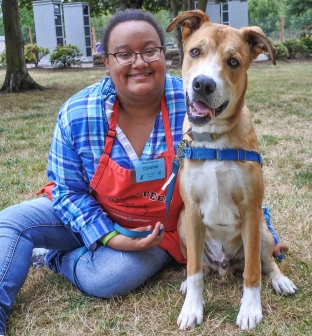 Caroline couldn’t wait to show me how Toby runs playing fetch. Yep, he still needs to learn how to master those gigantic feet!

It starts out okay…

“Hold on to the ball, right foot up…”

“Oops, almost tipped over that time!” 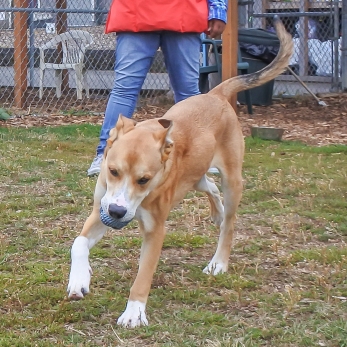 Toby is such a hoot. He’s going to make a terrific family dog.

I’m still here. Laslo thinks I’m a really good girl. You will, too!

I’ve written about Bellatrix several times since she’s been at WHS, but she still is waiting for her perfect family. She’s hoping that this week will be her lucky one. Bellatrix is a two-year-old American Bulldog/Boxer mix. She has been an outdoor dog her whole life. It took a little while, but Bellatrix now loves interaction with people and affection which she eagerly returns with licks and tail wags. Bellatrix is a playful, big girl at eighty-five pounds and so kids 13+ would be best for her. She also needs to be an only pet; no dog parks or off-leash for this girl. She really enjoyed her time on Sunday hanging with Laslo. 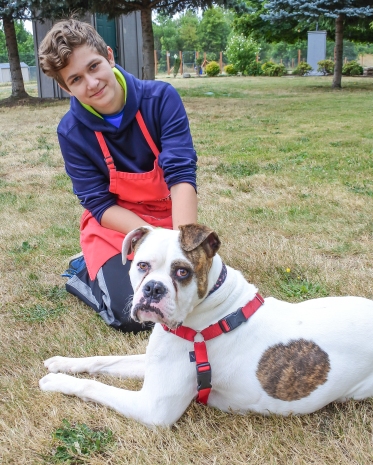 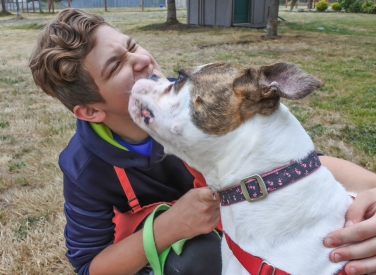 Here she was last week with Marianne and me.

Marianne spent some time explaining how important a good kennel presentation is to prospective adopters. 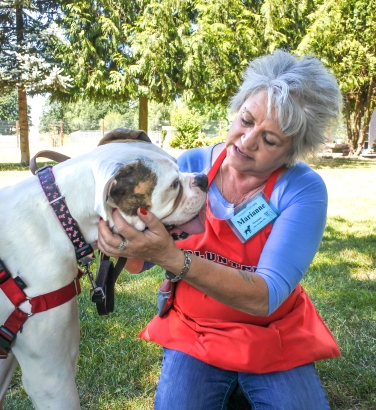 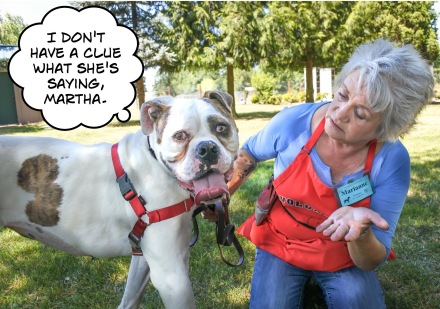 I’m back after being gone quite a while! Need a new best friend?

I first met and wrote about Roxy in January of 2013. She came to the shelter a two-year-old Bull Terrier mix, having been surrendered because of landlord issues. She had painful indentations around her nose due to being muzzled. I instantly fell in love with this sweet girl who had good reason not to trust people, but did. She was quickly spayed and put on the adoption floor, then adopted in February. So I was very surprised last week when I saw she was back, found as a stray. Now five, she is just as good of a girl as she was three years ago. She walks well on leash, took my treats politely and enjoyed playing with other dogs in playgroup. She is house-trained and looking for a family with kids 10+. Roxy deserves a loving forever home where she can go for walks, play fetch and curl up with her peeps. I’m hoping she finds her new family very soon. Here she was with Caitlin on Sunday. 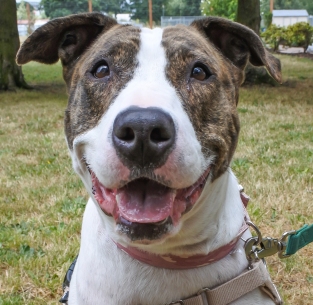 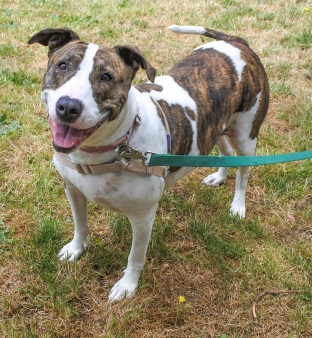 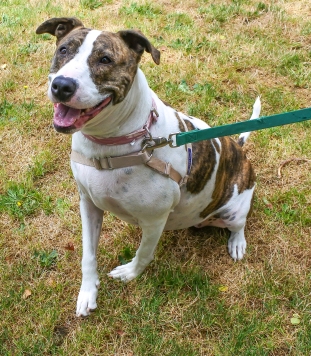 Daniel announced his pick on Sunday before I had to ask. It was Jonny because, he explained, he’d been wanting to have Jonny be his pick for the past several weeks. When I asked why specifically Jonny, Daniel said because he is a playful, energetic, happy dog who is finally over his cold and out of ISO, ready to meet his new family. Jonny is a one-year-old Staffordshire Terrier mix who is looking for a person who wants a smart, exuberant, food-motivated dog to be a new best friend. His adoption package includes a WHS training class called Check In and Chill Out. He enjoys working on skills, so training will be a blast for both Jonny and his new person. He’s a ball dog, has a good sense of humor, and has the most beautiful eyes—one blue and one brown. Because he is so active, he’ll need to go home with older kids or just adults. Here they are, Jonny and one of his biggest fans, Daniel. 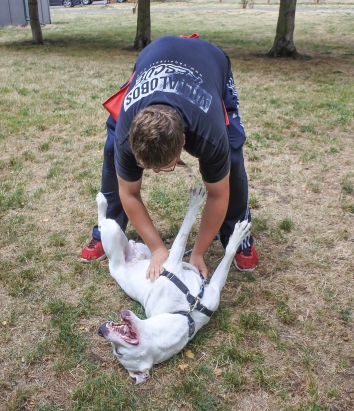 You can find out more about these dogs on the WHS website at: http://www.whs4pets.org. 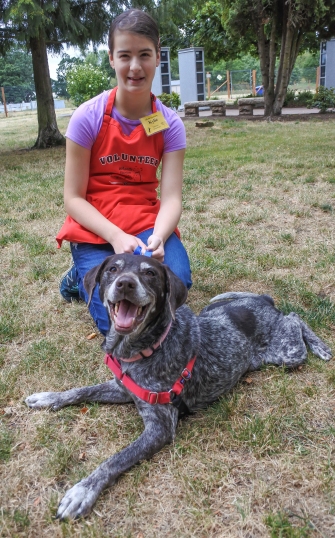 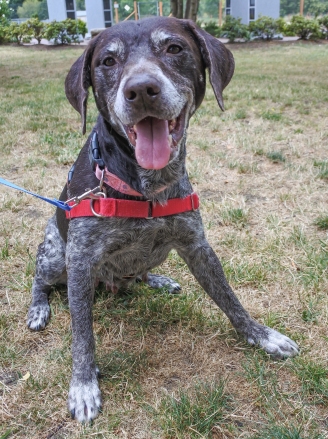 She loved my treats and took them gently.

Here’s Caitlin with Wookie, a four-year-old Miniature Dachshund/Papillon mix. (Yes, he really is this cute in person!) 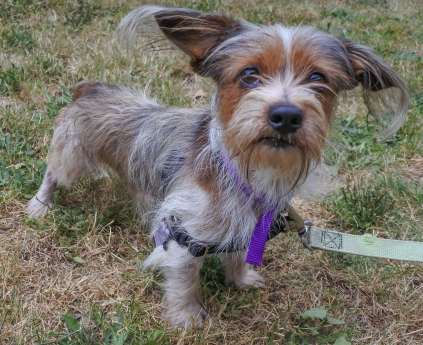 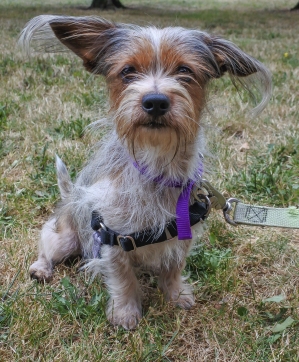 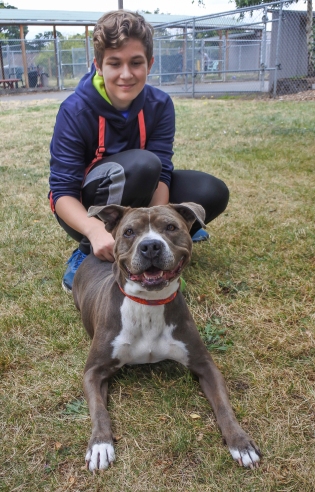 Prince arrived at WHS as a transfer from California in July, 2014. I wrote about him in my blog and took a picture of him with Emelynn. He was a cutie!

This week I got this wonderful update:

“This is Prince who I adopted two years ago today from the Willamette Humane Society! He’s a very happy and spoiled pup now, and has absolutely come out of his shell and I couldn’t be happier! He is my emotional support animal for PTSD and anxiety, and he has helped more than any medication could. So happy I rescued this guy and he has rescued me in return!”

Last Friday Linda, her dog, Henry; WHS former volunteer manager Karen, her former WHS dog, Tanner; and I got together for a picnic. We had a great time! Tanner never forgets a friend and Linda was his favorite peep at the shelter. After his puppy exuberance landed him in bite quarantine for the second time, Linda took him under her loving wing for training. Over lunch one day I told Karen about this silly youngster who loved everyone and everything including cats. And the rest is history. Tanner has even earned his Canine Good Citizenship Certificate. Here are a few shots of our afternoon together. 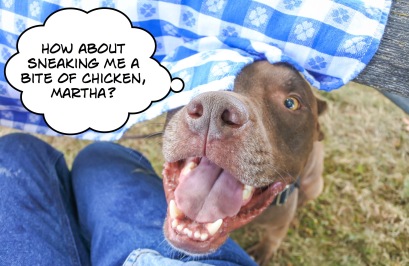