It was another fantastic week at WHS because three more of our long-termers finally found their forever homes. First, Bill, who was getting more depressed each week that he was overlooked, was adopted. Here was his announcement.

Another long-termer was sweet Roxy.

Bellatrix had been adopted a few weeks ago, but proved to be too lively and strong for her new person, so back to us she came. But THIS time she didn’t stay long! Here she is with Caitlin, Caroline, Linda, and Marianne. 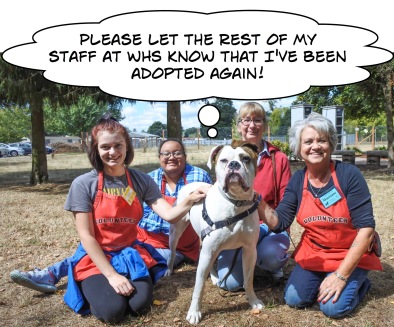 Below are all of the Blog Dogs who found homes in the last week. 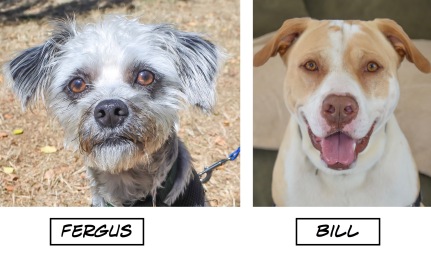 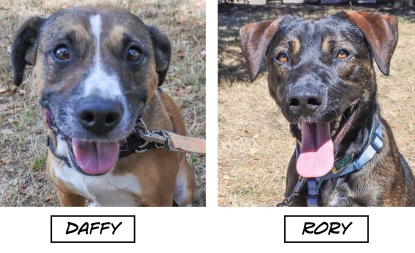 I’m going to begin this post with a personal story. I’m sure many of my readers have heard this quote:

“Shelter dogs aren’t broken, they’ve simply experienced more life than other dogs. If they were human, we would call them wise. They would be the ones with tales to tell and stories to write, the ones dealt a bad hand who responded with courage. Don’t pity a shelter dog. Adopt one. And be proud to have their greatness by your side.” -dogsrule.com

This idea is proven true over and over again by our WHS shelter dogs. I want to tell you about my experience with one of them this week.

This is Spencer when I first met him at WHS soon after he had been surrendered. What did we know about him? We knew he was seven years old. We knew he was “partially” house-trained.  We knew he had lived with other dogs, but didn’t know how he’d be with cats. And we quickly found out that he was miserable in the shelter environment. He would simply lie in his bed looking dejected. He wouldn’t even get up to go out for a walk. He was adopted, but a week later returned, the people saying he was too sad and he wouldn’t eat and wouldn’t get up to go for walks. So once again, back in the shelter he lay on his bed, utterly depressed. I suspect some people walking through the kennels might have considered him “broken.”

That’s when volunteer Krystal scooped him up and took him home for a respite. To our delight, Spencer perked right up and happily joined her pack of dogs prancing around the house. After a couple of days at Krystal’s, he was going to have to spend a night back in the shelter because she was going out of town. After talking with my husband and WHS staff, I headed over to Krystal’s house to pick Spencer up and bring him home for a sleepover with us and yes, CJ the Cat. What I discovered during the next twenty-four hours was that Spencer is perhaps the best little dog EVER.

After exploring our house…

…and after a carefully supervised meeting with CJ… 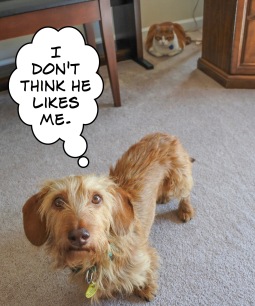 …we headed out for a walk.

Then we settled in for the evening. 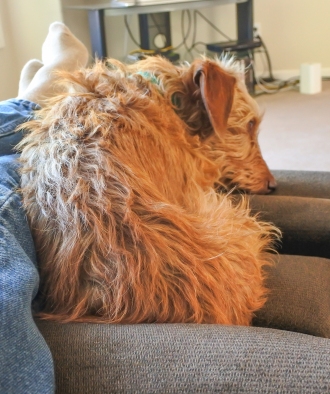 When it was time to go to bed, I put him in a soft crate next to me. He curled up and went to sleep without a peep for the whole night!

Broken? I think not. Spencer had no accidents at either Krystal’s or our house, he got along great with Krystal’s dogs, he made sure to stay out of CJ’s way at our house, and he happily followed me around everywhere I went inside. Spencer now has two new holds on him. So the next time you hear someone questioning the adoptability of shelter dogs, tell them Spencer’s Story.

“This is sweet Zoey. She is thirteen years old and has some issues with her back legs, so the staff decided she would be an excellent candidate for swimming at Bailey’s Journey. She was a bit timid at first, but once in the water, the expression on her face says it all! She quickly won the hearts of everyone there!”

Zoey is an Australian Cattle Dog mix and has been waiting for a new family since July 15th. She hasn’t gotten discouraged, she just continues to patiently wait for her perfect fit of a person to find her. Since Zoey is older and has some arthritis in her back legs, she needs to be with adults and not small children. She is house-trained and would not be much trouble to have around, as she’d enjoy short walks, then relaxing with her peeps. She has become a staff and volunteer favorite for her calm, unassuming nature. But don’t be fooled, she can show some spunk, too. We’re hoping Zoey’s wait won’t be much longer. Here she is with Caroline, one of her biggest fans.

Volunteers Elizabeth and Shannon spent some happy time with Zoey on Sunday afternoon.

And this is from a walk I took her on. She is just a delightful old girl! 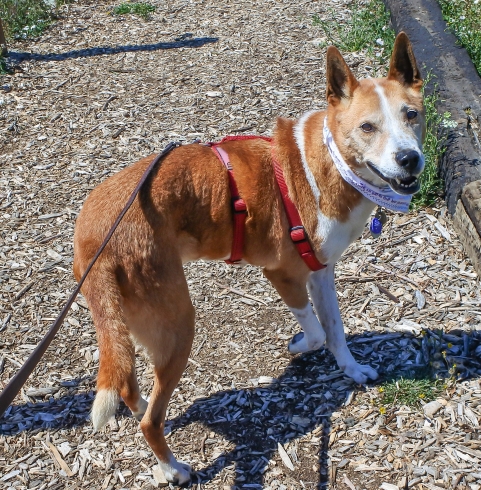 I’m new here and already I have a fan base!

Marianne could hardly wait for me to meet Grizz on Sunday. This eighty-pound gentle giant, only eleven months old, is an American Staffordshire Terrier. He is extremely well-behaved and knows basic commands. He also LOVES to play fetch. When I arrived at the shelter on Sunday, Marianne was already in a yard throwing a ball for Grizz.

Who knew dogs could fly? 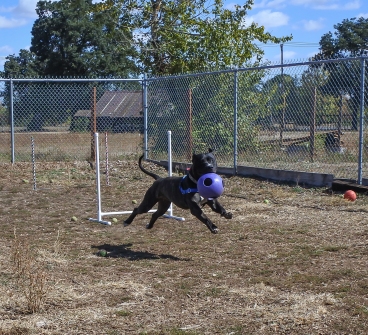 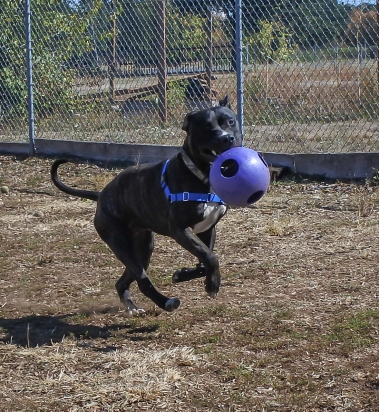 He seemed to know I was taking pictures, so posed as he ran by.

After a rousing game, he settled down nicely for his profile shots. This amazing boy walks well on leash, takes treats gently and is happy to chill out with his friends. He gets along with other dogs and had a blast playing rough and rowdy games with his new friends in play group. While almost perfect, Grizz does have one thing he needs help with. When left alone, he gets bored and…well, he’s not proud of it, but he has been known to be a bit destructive in the house. He’d be a great candidate for positive crate-training for when his people have to be away. Our Behavior Team can help a new family work with Grizz to overcome this issue. He’s so worth the effort. Here he is with two of his new groupies, Marianne and Caitlin. We are hoping this happy-go-lucky boy won’t be at the shelter long. 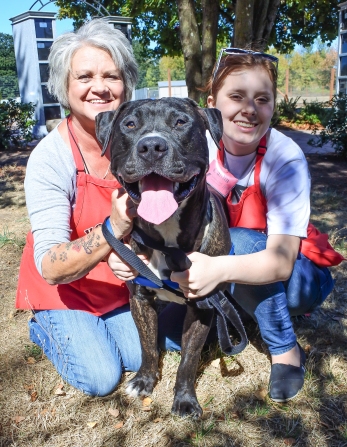 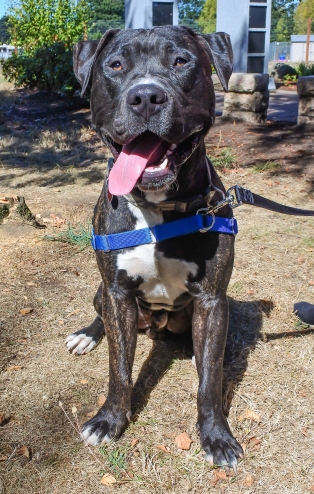 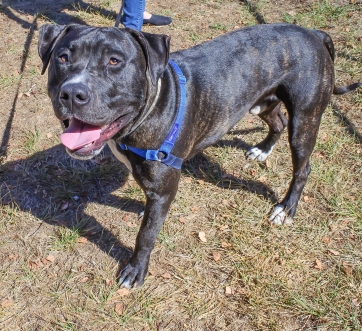 What a difference a haircut makes!

Meet Fred and Barney, a bonded pair of thirteen-year-old Japanese Chin/Pekingese mixes, who came in looking a bit bedraggled, but still adorable. Fred is the leader and takes good care of Barney, who is almost blind. Needless to say, they have to go home together. They have some age-related medical issues, but are as affectionate and sweet as they can be. Everyone has fallen in love with this duo and hope they will soon be snuggling with each other and their new peeps in their forever home. 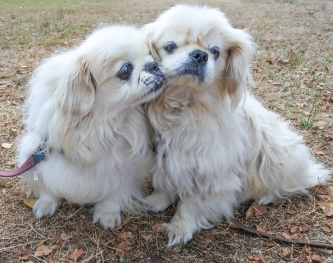 Yep, Caroline and Marianne both became willing staff to these brothers.

And here they were today. What a difference! They seemed to feel better, too, after their trims! 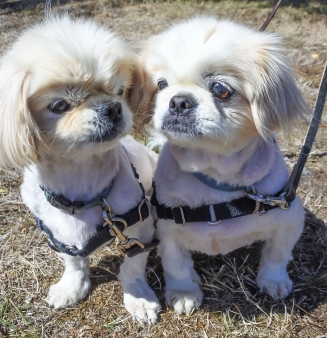 Here they are posing with Jolene this afternoon. 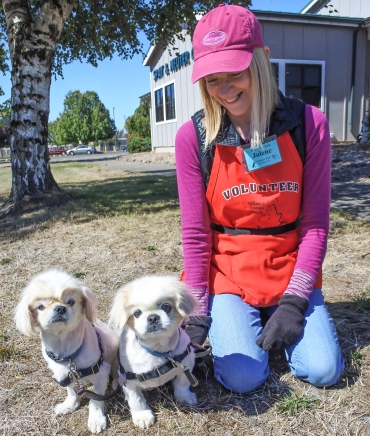 Everyone passes me by in the kennels. Please look at me and see what a good girl I can be!

Juicy has become one of our long-termers, having arrived at the shelter on June 26th. She is an eight-year-old American Staffordshire Terrier mix. Juicy wants to be calm and collected, but oh, how she enjoys treats and can easily forget to be polite and patient. She also loves to run and play, and in her eagerness can forget her leash manners. She is working hard on both of these skills with our Behavior and Training team and is showing improvement. Here she was on Sunday with Laslo. Can you tell she sees that I have treats for her after she sits for a picture? 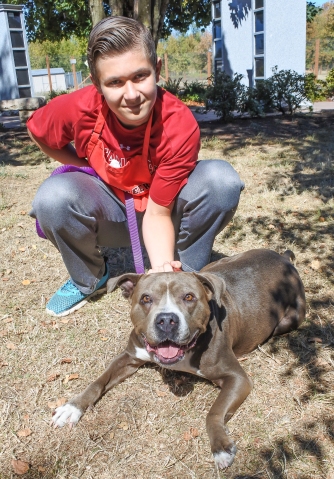 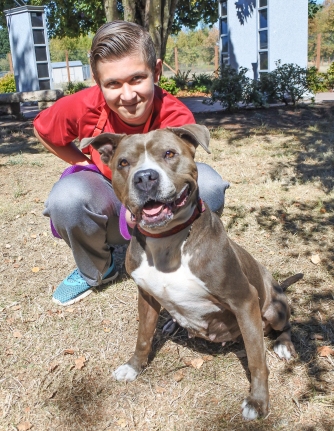 Jessi is a former staff member who runs our Sunday morning play groups and has become very fond of this active girl. While Juicy can be a bit picky about her dog friends, Jessi sent me this video of last week’s play showing what a fun girl she can be with the right friends.

I got to be the Blanket Time Dog on Sunday!

On Sunday afternoons after I’ve taken all the new dog pictures for the day, Marianne, Caroline, Caitlin and I usually spend some relaxing time on a blanket under a tree with a shelter dog. This week it was Rusty who asked to hang out with us and visit. Rusty is a six-year-old American Stafford Terrier mix whose constant grin makes everyone around her smile. Rusty, at forty-five pounds, is a perfect medium-sized girl. She walks well on leash, loves to work for treats and will play fetch as long as you are willing. She is so excited when playing that she does a delightful little two-step dance while she waits for you to throw the ball. We decided to play a little fetch before we went to the blanket.

She patiently waited for Marianne to throw the ball.

Soooo excited, she did her little dance.

Then it was time for the tunnel run. As long at there’s a tennis ball involved, she’ll go anywhere!

After we were all tired out it was Blanket Time. It was also Caitlin’s last walking shift, as she’s headed off to college to become a vet! We’ll miss her a lot. Also, Caroline will be gone about a month recovering from knee surgery. So it was a special time for all of us. 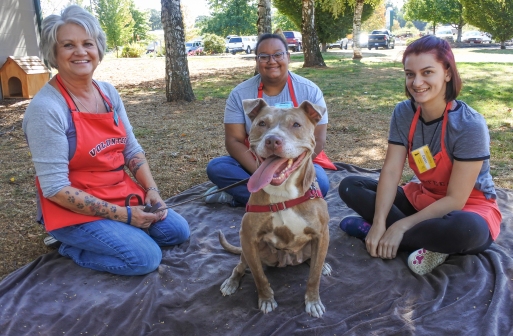 Rusty decided she would get things started. 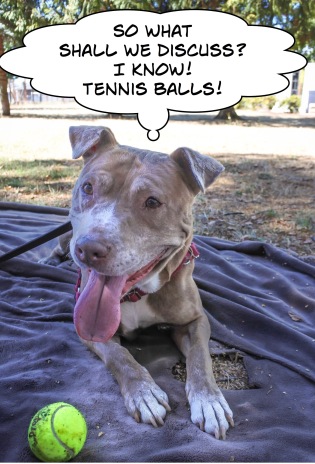 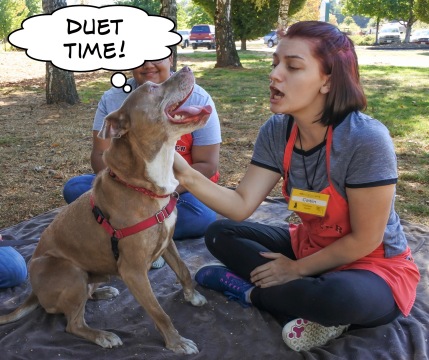 After tennis balls had been thoroughly discussed and songs sung, it was time for Rusty to tell us a story. 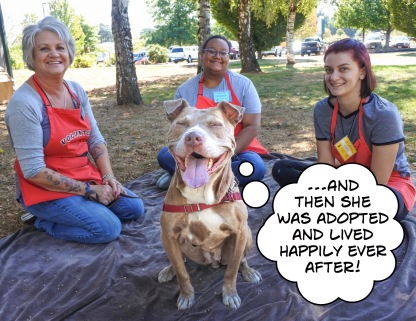 We’re all hoping that this joyful dog will find her forever home very soon. Her people will be very lucky.

Here are some other shelter dogs waiting for their forever homes…

Danny is a thirteen-year-old Poodle mix who loved his cuddle time with Francis.

Yamhill is an eight-year-old Lab mix, here with Linda.

Gunther is a two-year-old Retriever/Malamute mix, here with Caitlin. 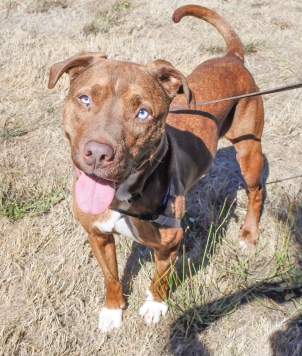 Velma is a one-year-old Chihuahua mix, here with Caitlin. (Yes, there are two Caitlins.) 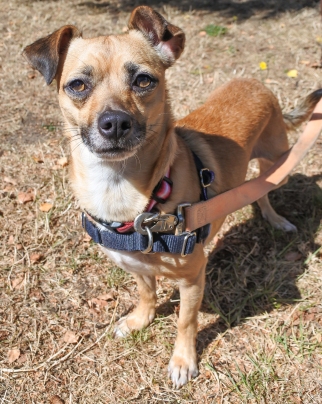 Ivy is a two-year-old Bulldog mix, here with Marianne. 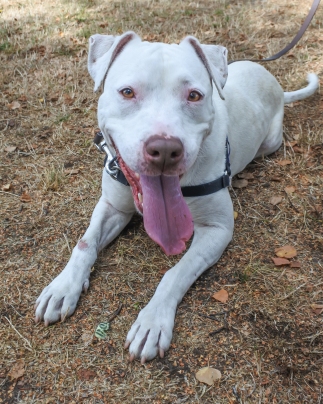 Well, check out this video sent by his person this week. What a lucky dog!

On that wonderful note, that’s it for this week!