Christmas is quickly approaching and the shelter dogs are starting to think about what they will wear for next week’s holiday pictures. Several tried out some festive scarves, but can’t wait for the Santa hats. They especially enjoy laughing at their dog walkers in equally jolly dress.

There were eight dog adoptions last week, here are the Blog Dogs who were among them. 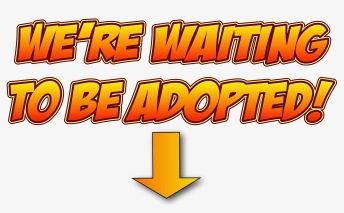 We thought I was going swimming again, but I got a fun ride and treat instead!

Last Friday Kenny, Marianne, and I excitedly drove to Bailey’s Journey to take Kenny swimming again, but discovered they were closed due to the weather. But that didn’t mean we three couldn’t have a fun outing anyway. We decided to make a stop at Dairy Queen for a cheeseburger for Kenny before returning to the shelter. Kenny is one of our ASPCA transfer dogs who arrived on October 28th. He’s a very active one-year-old American Staffordshire Terrier mix. He is a perfect medium size, weighing fifty pounds. He was adopted once, but was returned because he did not care for the cat in the home. He rides wonderfully in the car and if you’re looking for a snuggler, this boy may be a perfect fit for you. He LOVES people and their attention. He needs a family with kids thirteen and older, and, of course, it must be feline-free. Kenny asked to tell you about his ride himself, so here is Kenny’s Outing by Kenny: 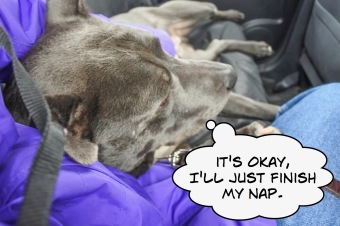 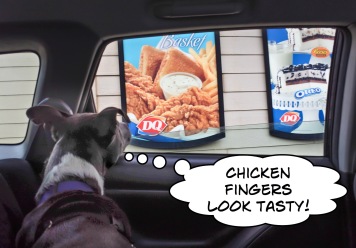 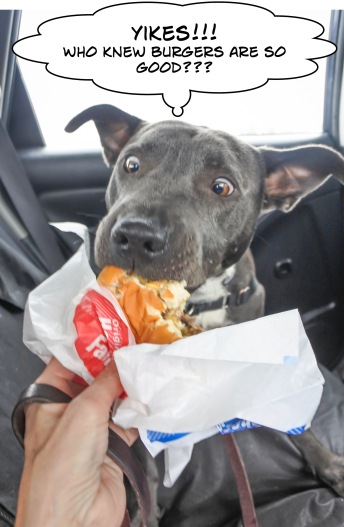 I think I look pretty dapper, don’t you?

For the third year in a row, WHS was chosen by Capitol Subaru to be their hometown charity for their “Share the Love” campaign. For every car sold or leased before January 3, the buyer can choose from four national charities or WHS for a Subaru gift of $250 to our shelter! To promote WHS, Subaru asked for some pictures of shelter dogs dressed up for the outdoors. Last week we asked Chance to pose and what a great boy he was to cooperate! Chance is a one-year-old American Staffordshire mix. He is energetic but can also be calm, as you see in the following pictures. He is working on potty training and general manners, and he’s such a sweet young boy! He’s waiting for his perfect fit of a family. Here he was all dressed up. Since he took his assignment very seriously, there was no smiling!

Since Chance did such a great job, we rewarded him with a whole hot dog on Sunday! Look at his amazing impulse control! He took each bite of the hot dog extremely politely. 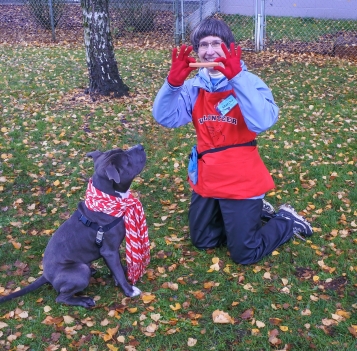 Posing with two of his biggest fans.

Jasmine is a very sweet senior girl. I first met her when she arrived at the shelter and felt so sorry for her, as she was overwhelmed. I was thrilled when one of our volunteers, Cindy, took her home to foster. Jasmine is looking for a retirement home where she will be loved and can relax with her peeps as she is doing in her foster home. Jasmine has lived with cats and other quiet dogs. She has also lived with children, but not being a youngster anymore, she will need understanding, older kids. Jasmine’s foster mom sent me this note:

“Eleven-year old Jasmine, AKA Jazzy as she prefers to be called, loves people.  She’s a black lab mix and has blossomed since coming into our foster home a month ago. At first, she was pretty nervous and was a little stiff and arthritic in her movement.  After shedding a few pounds and adding joint supplements to her diet, she now loves to go on walks.  She’s very well behaved in our home: perfectly house trained, doesn’t get on furniture and never gets into any trouble.  She does have some anxiety/separation issues that have gotten better as she learns we will be there for her.  She greets everybody with a happy tail-wagging greeting, and then will retreat to a quiet part of the house.  She really likes to have her people around though, and will happily accompany you on car rides.  She would love to be in a home where her people are around most of the time and will take her on walks.  She’s in great shape for her age and has a sweet, happy disposition.  And of course she loves pets and massages!  She is indifferent to other animals, unless they’re rowdy playful types in which case she lets them know she is not interested. With a little time and patience Jazzy will fill her new people’s hearts with love, and give them a reason to go on walks – ‘never walk alone!’”

On Sunday, Cindy brought Jasmine to the shelter so I could take some pictures of this wonderful girl. She will be having some surgery soon to remove a fatty tumor—a very common occurrence in older dogs.  We are so hoping that Jasmine will soon be in her forever retirement home, she will make some lucky person a perfect companion. 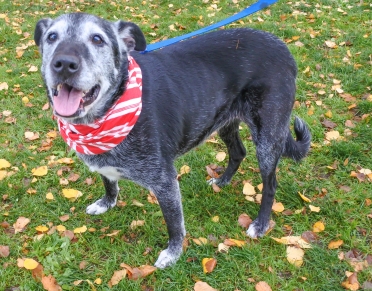 And here Jasmine is relaxing at Cindy’s house.

She’s always ready for a ride in the car.

I’m looking for just the right person who will love me even if I may become a hospice dog.

I fell in love with Bear the first time I met him after he had been found as a stray in November. He is an eight-year-old Retriever mix. He is a delightful boy who loves to play with other dogs who are his friends. He can be a bit picky, however, about who those friends are, so would need to meet any dog siblings he would be living with. Bear is house-trained, loves to play fetch, walks well on leash, and is an all-around terrific boy. We do know he has lived well with cats and children in the past. Bear had a mass in his mouth which was removed on Tuesday and is being biopsied. At this writing, it is not known whether or not it was cancerous. If it was, his adoption will be considered a hospice case, since there is no way of knowing how long Bear’s quality of life would be good. But we know that there are dog lovers out in our community whose hearts open to dogs like Bear. We’re hoping such a person will find him and give him a great life for however long he has. Here he was on Sunday with Patty.

Here he was the week before with Gabi. Bear has made many friends at the shelter. 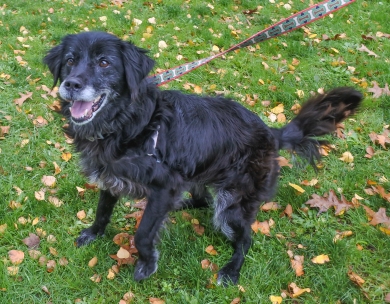 I’m young and little. I’ll be the best friend you’ve ever had, I promise!

Meet Patriot, a seven-month-old Dachshund mix. What a little character this boy is! He is eight pounds of love ready to snuggle his way into your heart. Patriot was a transfer from ASPCA, so we don’t know much about him, but he is smart, eager and adorable. I have a feeling he won’t be spending long at the shelter. Here he was on Sunday with Diane. 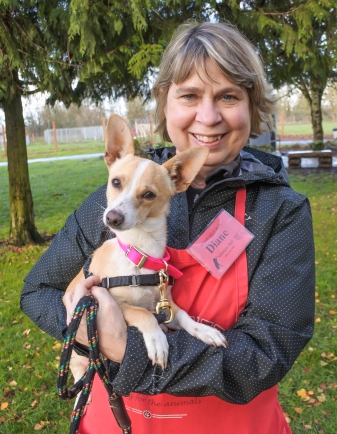 My family loved me so much, but they couldn’t keep me anymore. So I’m waiting for another great home! Is it yours?

I first met Mary in 2012 when she arrived at the shelter through a transfer partner. I immediately fell in love with this big lug of a dog who was always smiling. Mary was adopted once, then returned when she didn’t get along with the other dogs in the home. I was very worried about her ever finding a home. Then a family fell in love with her and Mary became a “nanny dog” to the little girl and later to a new baby sister. But the family can no longer keep Mary and brought her to us to find her another home where she will be loved. Mary is an eight-year-old Bull Dog mix. She is embarrassed to admit that she has gained some weight in her middle-age years and she’s anxious to lose some of those pesky pounds. She wants people to know that she is an avid fetch player and loves to chase those tennis balls. She also enjoys being a couch potato, so after an active game, she would enjoy some snuggle time. She’d also like to go home with children (PG+8), as she enjoys being a nanny. She can be quite picky about her dog friends, and though she has lived with a Chihuahua, would probably do best as an only dog. Mary has developed an interest in going on adventures by herself, so will need a diligent person to monitor her. That being said, the family who adopts Mary will have a devoted new best friend. Here Mary was today with Jolene. 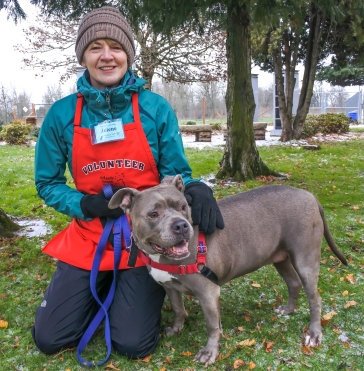 Here are some other shelter dogs waiting for their forever homes.
All of the following dogs are waiting for you at Willamette Humane Society. If one of them touches your heart, please come and meet them soon. Shelter hours are Mon., Thurs., Fri, 12:00 – 7:00 pm and Sat./Sun. 12:00 – 6:00 pm.

This handsome boy is Hank, a one-year-old mixed breed, here with Marianne.

This is Mead, a one-year-old Border Collie mix, here with Jenna. 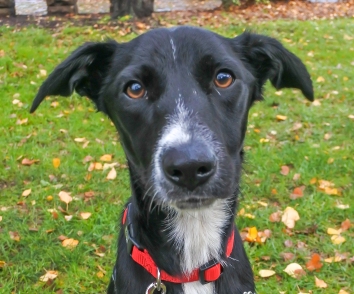 This is Betty, a three-year-old Australian Cattle Dog, here with Francis. 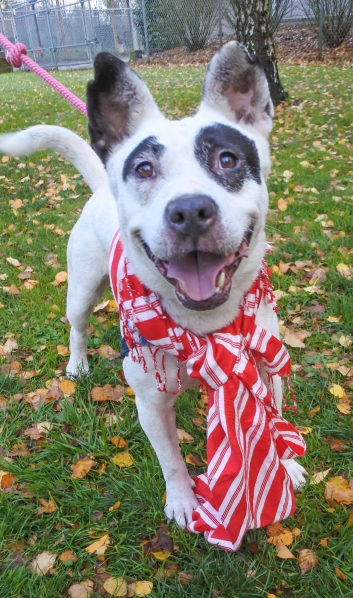 This is Lady, a six-year-old Mastiff mix, here with Marianne. 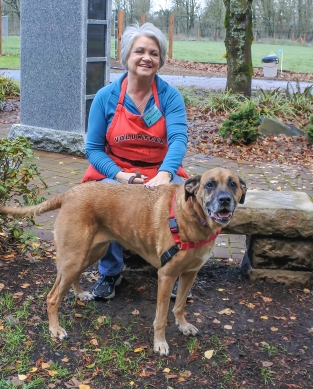 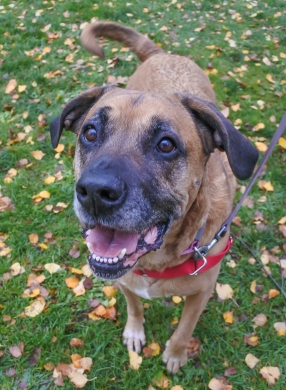 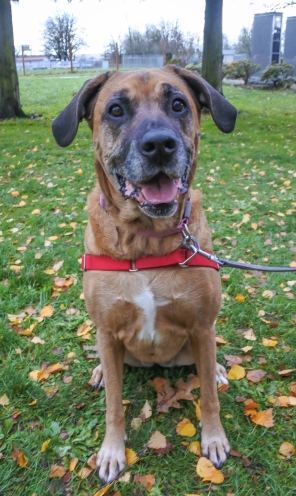 Scrappy was adopted in June of 2014. Then that August, the family returned and adopted Gryffin. Here is the latest update on these two wonderful characters.

Here were Scrappy and Gryffin when they were at WHS. 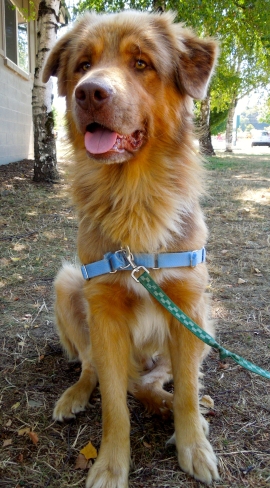 And here are some update pictures. “Gryffin and Scrappy are still doing fabulous. The center of our family’s world.” 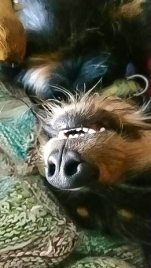 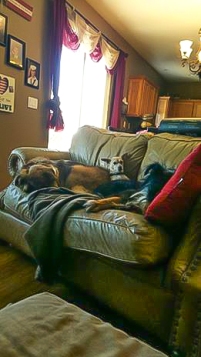 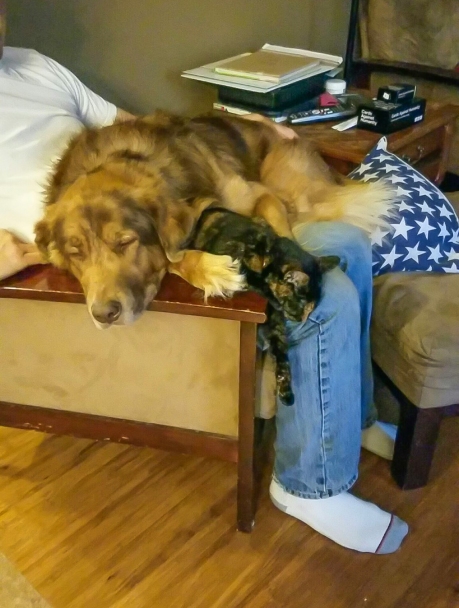 The family has grown to include Bella the cat. “Bella loves her Gryffin.”

“Everyday I get the vacuum out he lays in front of me til I vacuum him.”

Silly boy! That’s it for this week! 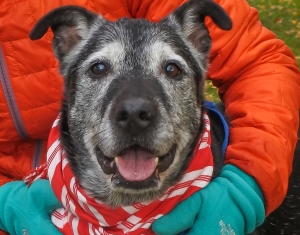