This week’s edition is going to be a bit different from my usual posts. With Christmas falling on a Sunday, I did not take the walker/adoptable dog pictures that I usually do. So instead of featuring new arrivals, I’m going to introduce our almost-completed Thinking Trail. Of course, I’ve also included the Friday swim-dog date. And perfect for this last post of 2016, I have SIX wonderful updates on some of our recently and not-so-recently adopted dogs.

But first, the shelter was extremely busy the week before Christmas! Here are the Blog Dogs who got to spend Christmas snuggled with their families in their new forever homes.

Last week, Marianne and I had an absolutely delightful time taking sweet Mary to Bailey’s Journey for swim therapy. If you are one of my regular readers, you already know Mary from previous posts. She is an eight-year-old Bull Dog mix who was dearly loved by her family, where she enjoyed being a nanny dog to the children. However, she also had a hankering for adventures on her own, and after many times escaping from the backyard, her family decided they had to surrender her back to WHS. So Mary will need to be outsmarted by a new family and live inside an escape-proof fence. But what a delightful best friend she will be! She is house-trained, an avid fetch player and loves to chase those tennis balls. She also enjoys being a couch potato, so after an active game, she would enjoy some snuggle time. She’d like to go home with children (PG+8). Mary is a bit (well, to be honest, more than a bit) overweight. So it was a no-brainer that she should be the dog chosen to go swimming on Friday. To Marianne’s and my happy surprise, Mary hopped right into the backseat of the car, settled in on my legs, and off we went. Here’s her adventure in her own words from the beginning… 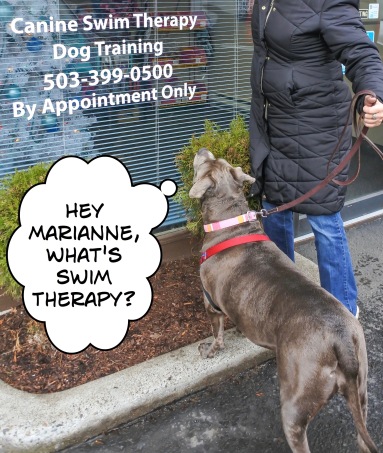 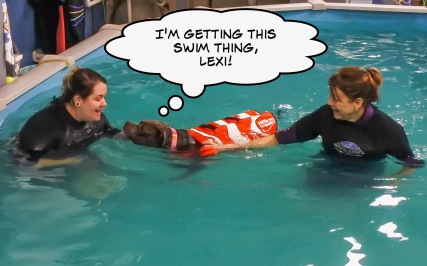 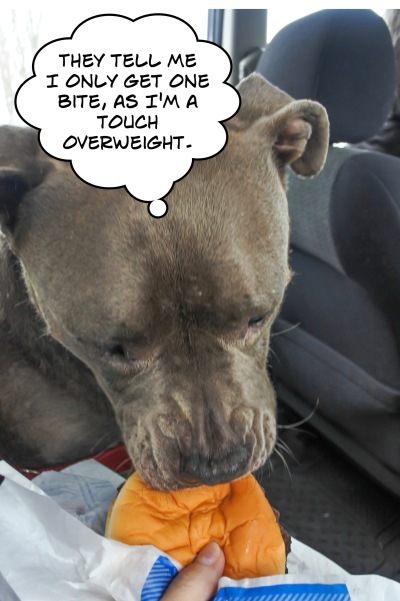 Another way to help our shelter dogs!

Recently Chelsea, our Behavior and Training Coordinator, along with the help of an Eagle Scout, has been working on a pet project of hers called a Thinking Trail. There are stations located around the dog-walking path. At each station, dog walkers are prompted to ask their dog to try a quick task. Not only do the activities make a more interesting outing for both walkers and dogs, they also help prepare our shelter dogs for their lives after they leave WHS. Below are explanations and actions at each of the stations happily demonstrated by Kenny and Marianne. 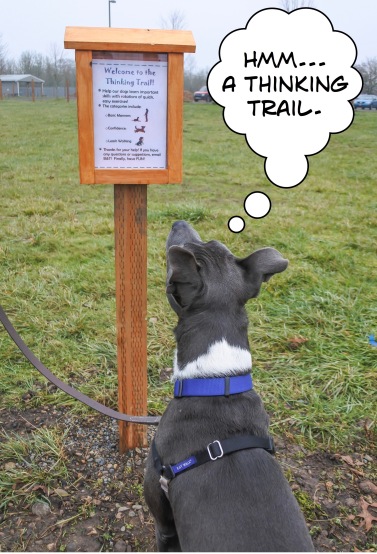 Kenny already has this down pat. He sits as soon as his walker stops. But we practiced, anyway. 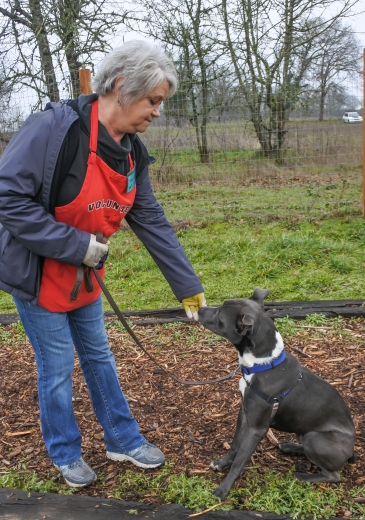 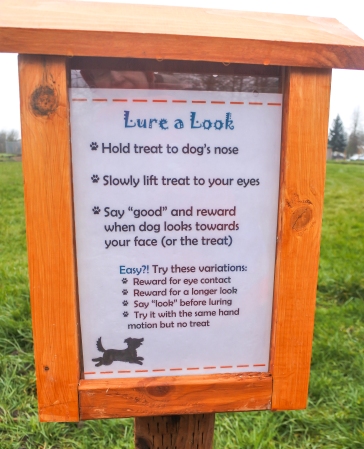 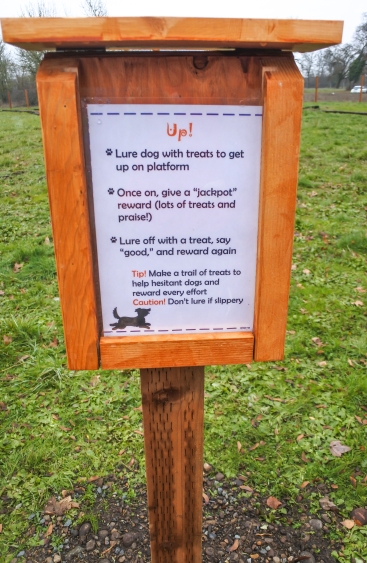 You’ll notice in this video that Kenny thinks it’s so much fun, he wants to keep playing!

Kenny is one of our ASPCA transfer dogs who arrived on October 28th. He’s a very active one-year-old American Staffordshire Terrier mix. He is a perfect medium size, weighing fifty pounds. He was adopted once, but was returned because he did not care for the cat in the home. He rides wonderfully in the car and if you’re looking for a snuggler, this boy may be a perfect fit for you. He LOVES people and their attention. He needs a family with kids thirteen and older, and, of course, it must be feline-free. He walks beautifully on leash and loves to train. We can’t understand why his perfect family has not found him yet. Maybe the first week of 2017 will be his lucky one!

As 2016 draws to a close, what a great time to have received these wonderful updates from families who want to share their stories of how a shelter dog made their lives happier.

Last Sunday we were thrilled when Rusty and her family stopped in at the shelter to say hi to many of her fans. Here she is with the family she adores and with her number one fan, Marianne. It was so good to see how great Rusty looks and how much she is loved.

Here was little Styx a year ago, hoping for a new home before Christmas. She came to us from ASPCA and we had no idea about her history.

“It’s been a year since we adopted our little Baylee (Styx) She is the most cuddly, playful, and well-behaved dog and we are so lucky to have her. Thanks, you guys, for all you do. We are also looking for a companion for Baylee to introduce into the family.” Baylee lives with two cats and the family is starting to look for a canine friend for her.

What a stunning girl she has grown into!

Here was George when I met him after he had just arrived at WHS from Texas in late November. He was a bit uneasy at the shelter…

…but not anymore! Here is his update:

“George has been an amazing addition to our home and my life! He’s such a little ball of energy but also loves to curl up and help me study. He loves going for rides with his brother, Auggie, and sleeping in mom’s bed. He also saw what we think was his first snow. He loved playing in the snow and bouncing around. I’m so happy that I found him, thanks to you guys! I love him so much, and look forward to the years ahead with my new baby!”

“This is how I help mom study.”

“This is my brother, Auggie.”

Phoebe arrived at WHS in September from another shelter. She was a youngster at seven months and was adopted so quickly, I didn’t get to meet her. Landlord issues caused Phoebe’s return to the shelter, but not for long. She quickly went home with the second couple who had put a hold on her. I recently got this update:

“My husband and I saw Phoebe at the shelter and we fell in love with her right away. Phoebe has been with us for a couple of months now and we are very happy with her. She is a very sweet dog, very submissive and quiet. We look forward to coming home after work just to play with her everyday. She learns very quickly. She loves running and meeting other dogs. She looks happiest when she runs. I usually take her to a park at least 4-5 days every week. My husband loves to take her for long, long walks around the neighborhood. She rides in the car really well. She loves staring out the windows. After her exercise at the park, she always falls asleep when she gets in the car.”

On the way to the dog park! 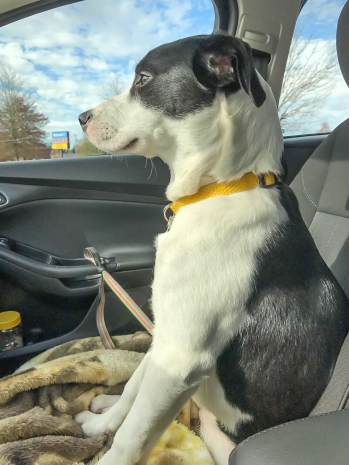 On the way home from the dog park…trying to stay awake.

Giving up trying to stay awake. 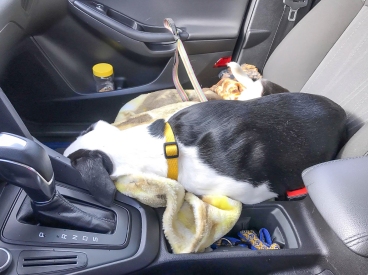 She gets a new bone for Christmas! What a trick!

Rose came to us from another shelter in October. 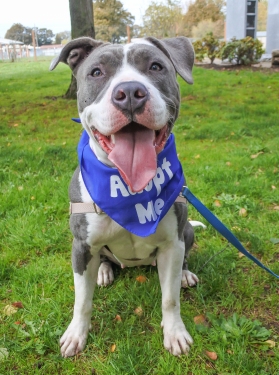 She was adopted once, but returned after a week due to landlord issues. She seemed more stressed after she came back to the shelter and I became concerned about her finding her perfect home. I needn’t have worried. She was adopted again in November and here is their update.

“Rose has brought so much joy into our family and is already so irreplaceable. She literally could not be a more perfect dog. The first thing that we learned about Rose was her love for tennis balls. She always has one with her, and when there are more around she will hoard them in the corner and not share! She also is very quick at learning; she has perfected sit, lay down, stay and the handshake. The only issue now is she doesn’t just shake your hand when you tell her to! She will come up and shake only when she wants a treat, wants you to throw her ball, or simply wants your attention. We have also learned that she loves to cuddle; all 50+ pounds of Rose believes she is a lap dog. This means that she thinks she owns our couches and bed, we would never tell her she does, but it is true. One of our favorite parts about her is her love for the snow! As soon as she wakes up and realizes there is snow, she will run out into the back yard and play for hours… throwing snow up into the air, hiding her tennis balls just so she can dig them up, chasing snow balls. Also, little side story…I was going to bed late last night and was looking for Rose to make sure she was in our room. I was searching about ten minutes, until I realized that she had curled up under the covers!” 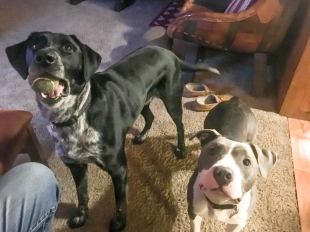 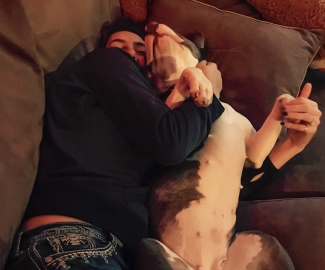 Melvin arrived from a Texas shelter in October. He was quite timid and seemed unsure of himself. We quickly fell for this sweet boy.

He soon had three holds, but two fell off. I worried that his third one might fall off, too. Nope. Here is Melvin, now Pax, heading home.

And here is the update:

“We are so lucky we were able to adopt Pax!  He’s the most amazing dog I’ve ever met. It’s been 2 months and I get comments all the time about what an incredibly well behaved dog he is.  The first day we had him he knew his name.  The third day we had him we let him off leash, we have 10 acres.  When we called his name, he came running.  The first week we had him he was terrified to get in or out of the car.  I took him on a lot of errands carrying him in and out of the car each time.  Finally, after that, he begs to get in the car and go with us everywhere.  I have 2 boys, 11 and 6.  We have lots of kids and people that come over, he’s so polite and wonderful with everyone.  He learns so quickly.  I was very nervous to adopt from the humane society not knowing the background of the dogs.  He was not the first dog we looked at, many were not the right fit for our family.  Pax had 2 holds on him and they decided he wasn’t the right fit for their family.  I’m so very happy they did, because we got the most amazing dog!” 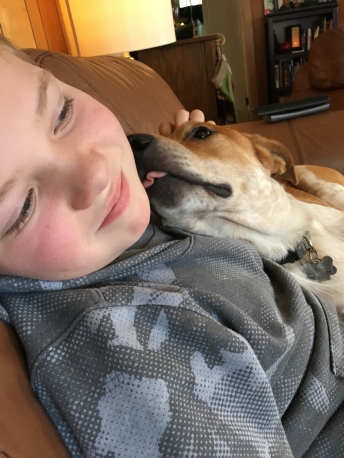 A few thoughts from me:

Finally, I’d like to say a personal word about updates from adopters. As volunteers, we fall in love over and over again as we get to know our shelter dogs. We walk them, talk to them, play with them and snuggle with them. We become attached. We rejoice when they are adopted. And then we wonder. Are they happy? Do their families know what wonderful and tender souls they have adopted? This is why we are so excited when adopters send me updates. We can rest easy that a dog we have loved at the shelter finally has a happy forever home. Thank you for sending us updates!

On that happy note, see you next year!

Remember, if you see a dog on my blog whom you are interested in meeting, try to make arrangements to get to the Willamette Humane Society soon. Some dogs are adopted more quickly than you might think.
You can reach me at adoptanoregondog14@yahoo