I’m going to start this post with a happily-ever-after story. As shelter volunteers, we naturally get attached to “our” dogs and hope that every single one is adopted into a loving home where they can happily live out their lives as members of a family. So when a former shelter dog and their people stop in at WHS for a visit, we are very excited. Such a visit happened on Sunday. First a little history…

In early November of 2016, a frightened, shy dog named Autumn Leaf arrived at WHS from another shelter where she hadn’t been adopted.

I instantly fell in love with this timid, nervous, not especially pretty girl, and began to worry about who would adopt her. She was so easily overlooked in her kennel, appearing like so many other dogs needing homes and too apprehensive to show her personality at first meeting. But as it turned out, I didn’t need to worry. On November 27th, her perfect family found her. They had come to the shelter to meet another dog, but there was something about Autumn that touched them and they were instantly smitten. They named her Delta.

On Sunday Delta came to the shelter to visit and we were thrilled to see her and what an outgoing, happy girl she has blossomed into. She is so loved by her family. Just look at this girl now!

Caitlin and Delta had a happy reunion. 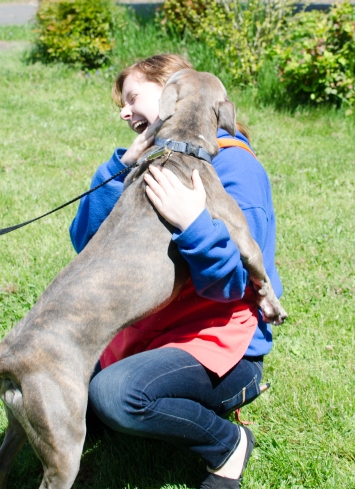 Here she is with Marianne, who loved her from the very start, too.

Linda arrived and Delta remembered her famous mini pancakes she uses for treats.

There is no doubt that Delta adores her person.

It was such a great way to begin an afternoon at the shelter!

There was one very special adoption last week that I want to tell you about. Our long-termer Ariel finally won the hearts of a family and I was thrilled that I was at the shelter when they went home so I could snap this picture. Happy, happy dog! 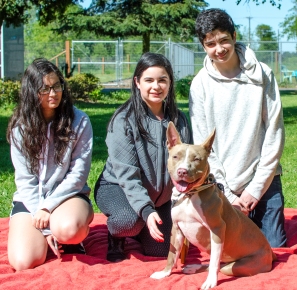 I’m not a youngster, but what I lack in youth, I make up for in experience!

Buzz has become such a favorite of so many at the shelter. This eleven-year-old Lab mix is waiting for an active retirement home. He’s been much loved by his owner for ten years, but due to health issues of his person, Buzz had to come back to WHS. He may be eleven, but Buzz still has lots of energy and an affectionate, fun-loving personality. His former owner reports that Buzz is great with other dogs and even cats! He would prefer a home without children, since he can be overwhelmed by noise. Buzz has been an outdoor dog his whole life. However, now in his golden years, he’d like to spend a lot of his time inside with his peeps while still going for leisurely walks, playing games of fetch, and going on car rides. On Sunday, Marianne, Caroline, Caitlin, and I decided that because it was such a lovely spring day, we would do “Blanket Time” with some of the dogs. First one was Buzz. To say he was relaxed and loved every minute would be an understatement. 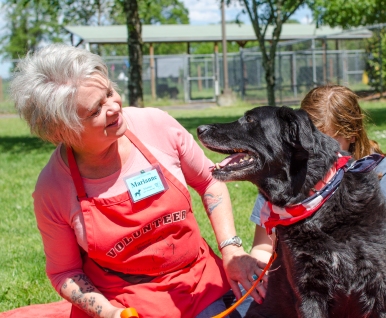 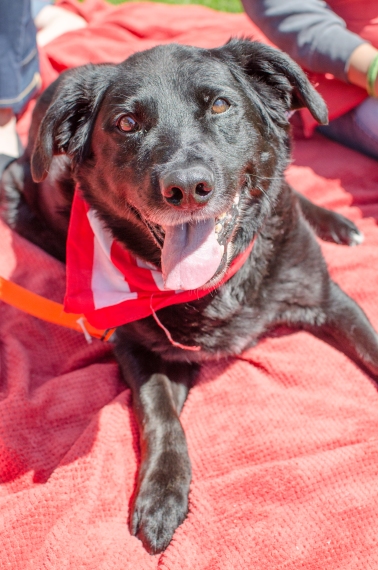 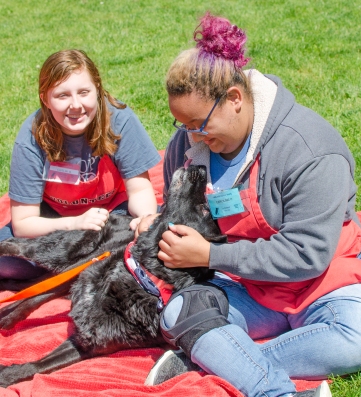 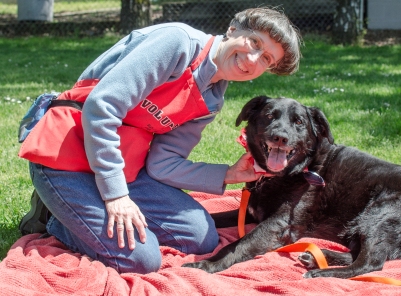 The shelter environment can be hard on older dogs and Buzz was showing some stress, so volunteer Susan took him home yesterday for a few days of respite at her house. She reports that he is so relaxed and happy and loves her pond! Who knew he was also a water dog! Here he is chilling in her backyard.

We’re hoping he won’t have to spend much longer waiting for his new family. Someone is going to be so lucky to adopt this wonderful boy.

I am back. It turns out my person was allergic to me. So I’m available for adoption again! How about you?

Our sweet Paloma (the Spanish word for dove) arrived at WHS as a stray in early March. She is a one-year-old Boxer mix and immediately became a rock star in playgroups, being a rough and rowdy social player with her new friends. She walks well on leash, knows some basic commands and loves to hang out with people. To top it off, she is highly treat-motivated, so will be a breeze to train in more skills. She is rated PG+10. We thoroughly enjoyed our Blanket Time with this sweetheart. 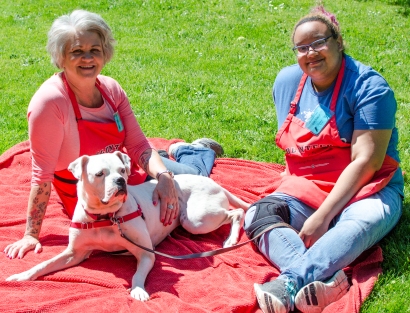 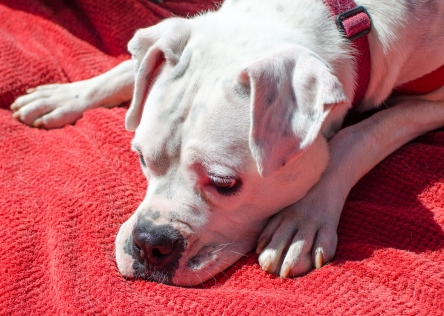 I’m back, too. But I know that my perfect forever family will find me soon! Is it yours?

Yes, Axel is back. We were all so excited when he was finally adopted, but the fit was not the right one and so he’s now “ours” again until his perfect family finds him. Axel is a three-year-old American Staffordshire Terrier mix. After some energetic exercise, Axel loves nothing more than relaxing with his peeps. He is house-trained and knows basic commands. He is a good listener and loves to learn new things. He’d be great in a family with older (10+) kids, but wants to be the only pet. Axel will need his family to be patient and understanding for the first few weeks after his adoption. He’ll need to have someone at home during that time so that he can slowly adjust to his new surroundings and learn to be comfortable in his crate and on his own. Once he is settled in, what a wonderful companion he will be! Marianne and I had some quiet Blanket Time as well as yard play with Axel on Sunday. He is one of the most affectionate dogs we’ve ever met. As you’ll see, he actually falls asleep when he’s hanging out with people who love him. 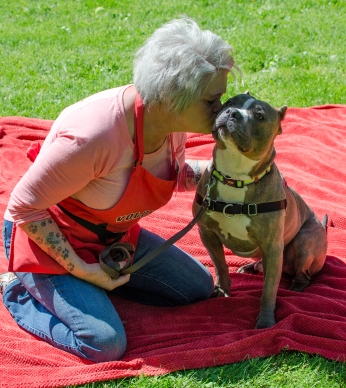 Remember BFF’s Angus and Audrey from last week? Jolene and Rosie had them out again on Sunday. Sure wish they could be adopted together! Both are American Staffordshire Terrier mixes. Angus is one and Audrey is three.

Today Audrey was one of the first dogs I walked. She has really come a long way in gaining confidence since she’s been at the shelter. She happily walked perfectly on leash, then when we were heading back to the building decided she needed to do this:

Here is Lucille, a two-year-old Shepherd mix, with Sherrie.

Millie, a one-year-old Doberman Pinscher mix, is back and waiting for her perfect fit of a home. She loved spending time with Francis on Sunday.

I met Lady for the first time on Sunday and was smitten just as Caroline was. Lady is an eight-year-old Retriever mix.

Our two sweet seniors, Jazz, a six-year-old almost-blind Dachshund mix, and Spike, a ten-year-old Rat Terrier mix, are both waiting for loving retirement homes. Here they are with Sherrie and Jasmin.

Little Lucky is a Chihuahua and another senior at eleven years old, here with Patty.

Our good boy, Langston, one of the best Hound mixes we’ve ever met, is four years old. He has developed quite the fan club including Frances, Marianne, and Caroline. 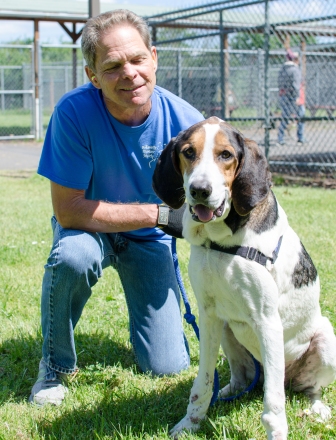 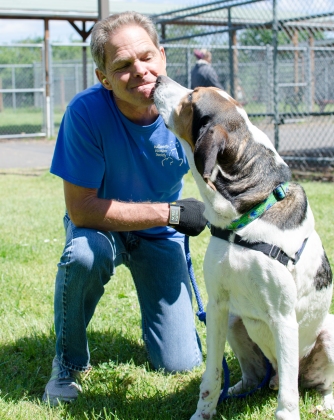 We had one other happy surprise on Sunday when one of our all-time favorites came to public playgroup and stayed to say hi to us. I’m thrilled to report that Zoey continues to thrive, even as a senior. She is greatly loved and happy.