I’m back after a wonderful adventure in Alaska! One thing on my bucket list for many years has been seeing humpback whales in person. I had high hopes that we would get a sighting during our trip, and we did! Even though this blog is about dogs, I can’t resist posting a couple of whale pictures that I took. Seeing these magnificent animals so close was breathtaking and a treasured memory. Her name is Flame. She visits the region every year.

And now on to shelter dogs.

Some people say I haven’t gotten adopted yet because I’m a bit aloof with new people. I just wish they would spend a little time with me so I’d get to know them!

Our sweet Lady is still waiting for her forever family. She’s been waiting since May. She has not gotten discouraged by having to wait for so long. She has adapted to shelter life quite well and she’s become a volunteer favorite. She gets a lot of time away from her kennel outside and in Mary’s Place, which has been remodeled into a wonderful relaxing room for both dogs and people. Lady is an eight-year-old Retriever mix who has been an outdoor dog her whole life. She wants to be an indoor dog now that she’s a bit older. Lady is more interested in people than other dogs, but would do fine with a male dog who would defer to her and not expect her to play with him a lot. She cannot live with a cat, as she would want to chase it. Lady really will be a wonderful best friend for a family with children ten and older. Here she is in the freshly re-done Mary’s Place. As you will see, Lady is not at all aloof once she spends a little time with you! 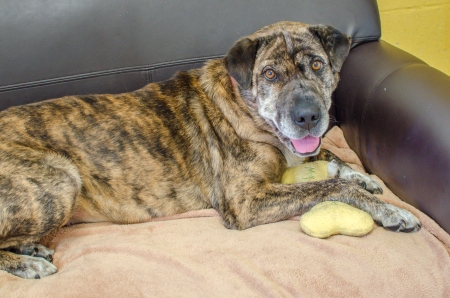 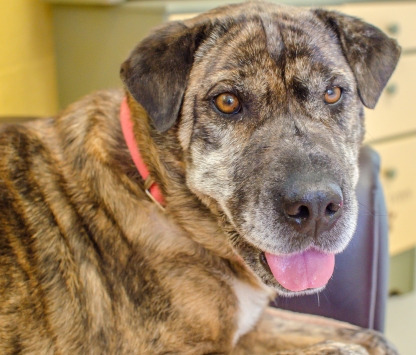 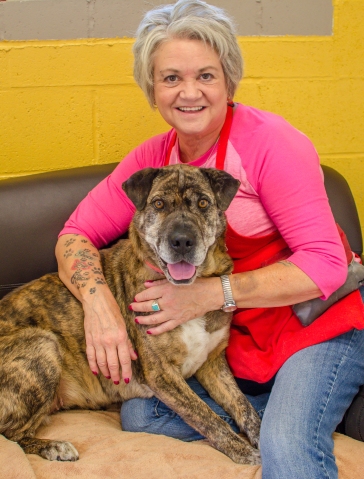 I’ve been here a while and I can’t wait to find my perfect fit of a family!

Coco is an eight-year-old Retriever mix who arrived at the shelter in early June. She is eager, smart, affectionate and LOVES people. She does well with children eight and older and is young at heart. Coco likes relaxing with her peeps on the couch, but also enjoys going for walks and working for treats. She happily learns new skills and is very attentive. Her manners are excellent and she is house-trained. She’s been adopted twice. The first time she got sick and was returned (she’s fine now!). Her last adopters said she is a great dog who listens well, but because they had a cat, they had to return her. Coco needs to be the only pet, but what a wonderful friend she will be! Caroline, Marianne, and I spent some time with this sweet girl in Mary’s Place on Sunday.

I’m still waiting for my just right family, but in the meantime, let’s play!

I have written about Bogart several times, but he’s still waiting for his perfect family fit. Bogart is a five-year-old American Staffordshire Terrier mix who arrived at WHS in March. He has been hoping that a new family will adopt him since his first family moved and couldn’t take him with them. Bogart is a big boy at 90 pounds and will need a family with older kids 13+, as he can get very excited about treats, birds, playing fetch, and tennis balls. Bogart is house-trained and has been around children and done well, but is working on walking more politely on leash. Bogart will need to be the only pet. He is highly treat-motivated and very smart, which means he would love to learn new skills as long as cheese bits were involved. We’re hoping Bogart’s perfect family will find him soon; he’s been waiting for them a long time. On Sunday Jolene took him into Mary’s Place for some “What’s in the Bag?” fun. He and we had a blast. 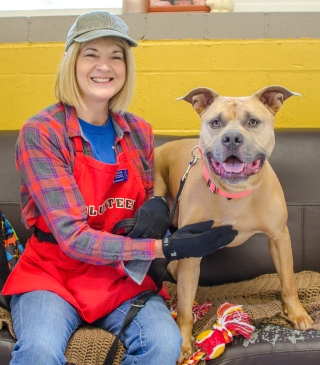 I promise to be your very best friend EVER!

Scarlett is a two-year-old Lab/Mountain Cur mix. She came to us as a transfer from Hawaii in April. She loves children 10 and older, but needs to be an only pet. Scarlett has a wonderful personality, is attentive, and eager to please. Her love of cheese bits makes her a dream candidate to learn new skills. She loves to go for walks, to play with toys, and to hang out with her people. And she has one of the best smiles! On Sunday after Jenna took her for a walk, she brought her into Mary’s Place for some quality time.

Fizzy is a newbie from Hawaii! He is an extremely shy eight-year-old Whippet mix. He’ll need a patient person to make him feel safe. Here he is with Diane.

I happened to see Rocket and Christine returning from their walk on Sunday. Rocket is a three-year-old American Staffordshire Terrier mix. 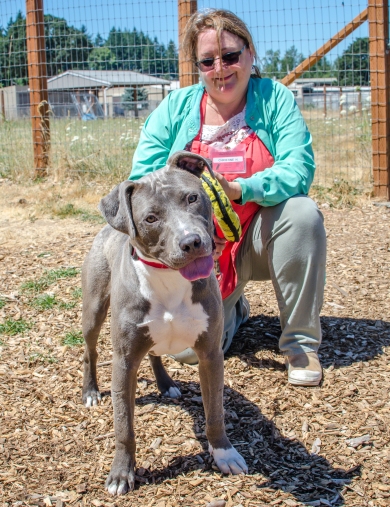 Fletcher is an adorable six-year-old Chihuahua mix, here with Jenna.

Jake is a wonderful eight-year-old Lab mix who, even though he is very overweight, loves to play fetch. In fact, today due to the heat, we didn’t let the dogs play fetch, but Jake sure wanted to! 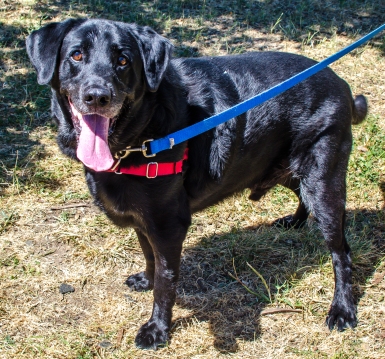 Prince had a fun outing with Francis on Sunday. Prince is a three-year-old Doberman Pinscher mix. This is what he does when I ask him to “sit.” 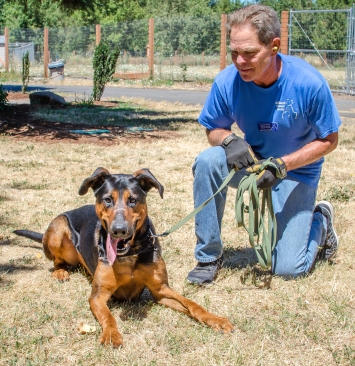 Gemma is a four-year-old Chihuahua mix with quite a sense of humor. Here’s Gemma with Jolene on Sunday. 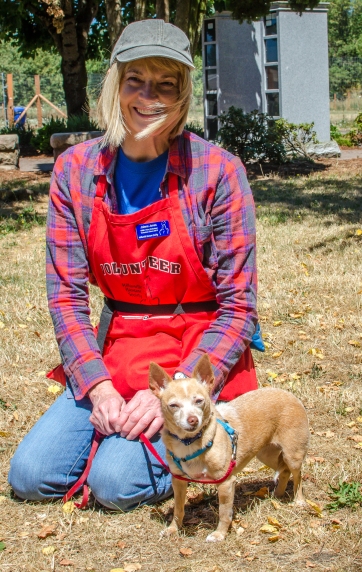 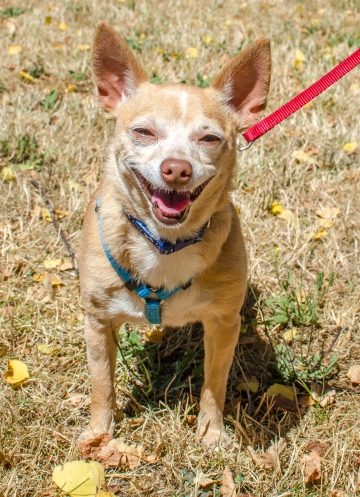 Yes, she really is this cute. Meet Isabella, an eleven-year-old Shih Tzu, here with Marianne. 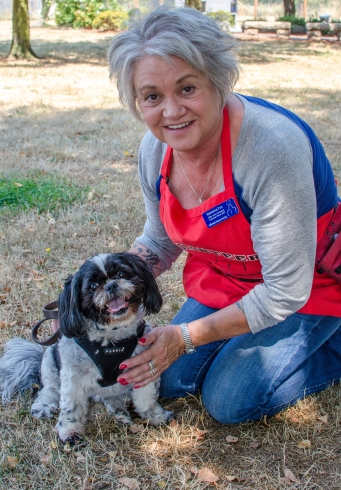 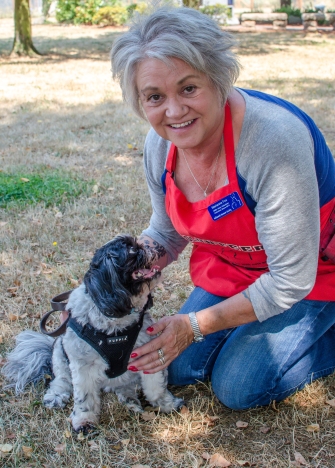 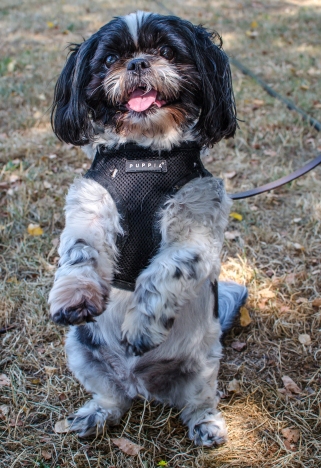 Walnut was a wonderful young dog who arrived at WHS very thin. We all fell in love with this goofy boy. He wasn’t adoptable right away, until he gained some weight. He quickly became one of Marianne’s favorites. (I know, they are ALL her favorites, but Walnut was extra-special!) He became adoptable while I was in Alaska, so I never got a chance to write about him in my blog posts. But happily, his new family sent me an update this week!

“I just want you all to know Rudy is doing great adjusting to his home and family. 🙂 He sure is a snugga bug! He loves going on walks with us and playing in our backyard. Our cat is a bit intimidated by his size but with time, I’m sure they’ll bond. Rudy will meet his new vet tomorrow.Thank you all again for your loving care at the shelter.”

We are over the moon that Walnut/Rudy got such a jackpot of a home! 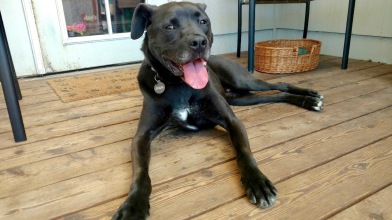 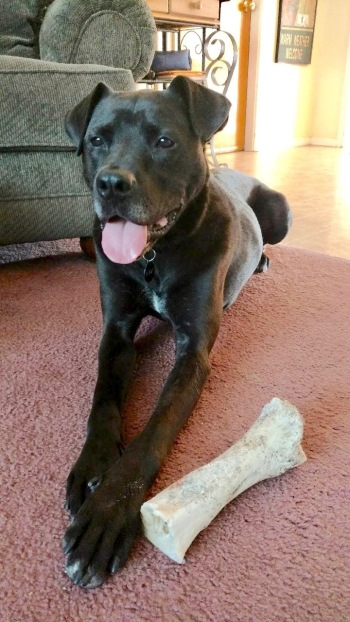 Evidently Rudy had never seen himself in a mirror before. He was a bit intimidated by the big dog!

This morning Beth invited a few of Mahina’s fans to brunch so we could see our girl again. We had a great time sharing happy shelter dog stories and seeing how at home our sweet girl is with her brother Jackpot, who adores her. She could not have found a more loving home. 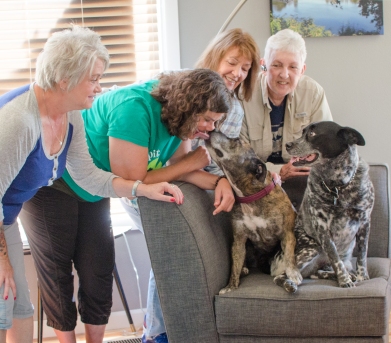 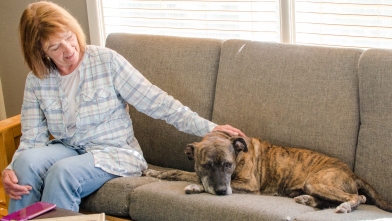 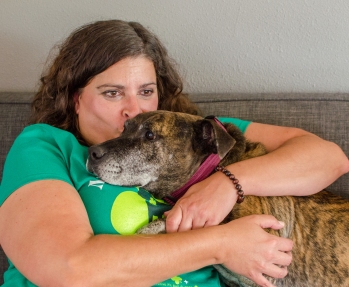 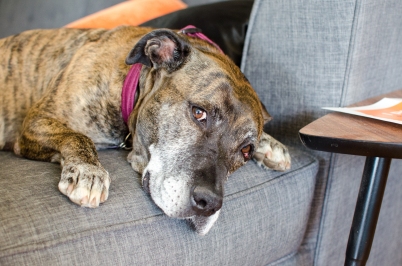