I had a wonderful Sunday afternoon meeting some new dogs, spending time with ones I already knew, as well as with human shelter-dog-loving friends. It was hot, but the dogs didn’t seem to mind and were happy to get outside or spend time in Mary’s Place, as long as they were getting human attention.

There was one especially happy adoption for me that I want to mention. A week ago Sunday, Marianne, Ayla, and I met a young couple who had come several weeks in a row to spend time outside of Bridgit’s kennel. We offered to bring Bridgit into Mary’s Place for them. It was pretty much instant love and Bridgit, who can be slow to warm up, quickly decided they were her people. The couple had some thinking to do before taking her home and when they left, we hoped they would come back. They did and we are over the moon.

I’m not going to lie. I’m not young. My eyes are a little cloudy and I have the lumps of old age. But I’m every bit as loyal and loving as the youngsters here!

Her name is Roxie. She is an eleven-year-old Rottweiler mix who is a gentle, quiet senior hoping to find a loving retirement home. Her owner who had her since puppyhood has died and Roxie needs a new person to love. 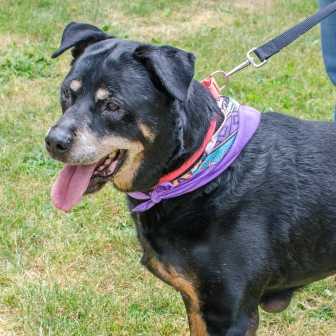 Before Roxie goes home, she’s going to have some surgery to fix a few things. She has a fatty mass that will be removed, a dental cleaning, and her right eyelid will be fixed (she has entropion, her eyelid is rolled inward). But she can still have a “hold” put on her, meaning her people would take her home after her surgery.

On Sunday Marianne, Ayla, and I took Roxie into Mary’s Place to hang out and she loved it.  Turns out she is a ninety-pound lap dog! 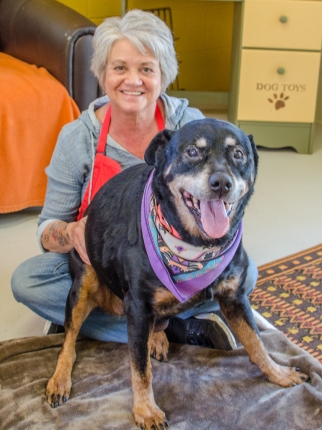 Roxie is affectionate, and although she’s got some stiffness from arthritis, she tried to play with her shelter-dog friend, Max, last week in playgroup. Roxie can be picky about her dog friends and at her age, would probably enjoy being an only dog. She has not had experience with children, and so would do best with older kids. She has gotten along with cats that she knows, but will bark at ones she doesn’t. Roxie is house-trained and walks well on leash. She will be happy to go for very short walks and then hang out with her peeps. We’re hoping that someone with a soft spot for old dogs will give our sweet girl a soft bed and lots of love for the rest of her life. We had a great time relaxing with her on Sunday. 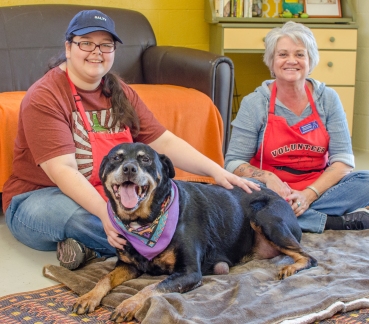 I’ve been here for quite a while. How about adopting me? You won’t be sorry!

Carly is a four-year-old Retriever mix. She is wonderful with people and most dogs, though she seems to prefer calmer dogs who are not rough and rowdy. Because she can be picky at times, she will need to meet any potential dog siblings. Carly is house-trained and loves treats (especially cheese) so will be a breeze to train. She likes kids and will be fine with children about ten and up. She was adopted once and the people said she was wonderfully behaved, sat by them during yard work and was well house-trained.

On Sunday we took her into Mary’s Place to see if she would play…and play she did! She had all of us in stitches as she rolled around the floor with stuffed toys. What a delightful jokester she is!

All that action can tire a girl out!

And then it’s time for some picture posing and relaxing with Jenna and Marianne. 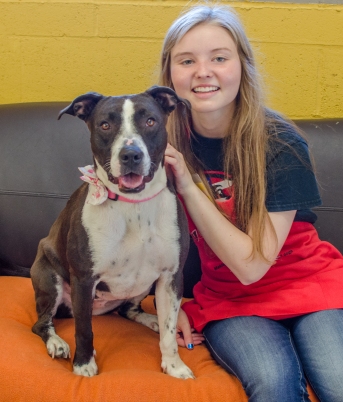 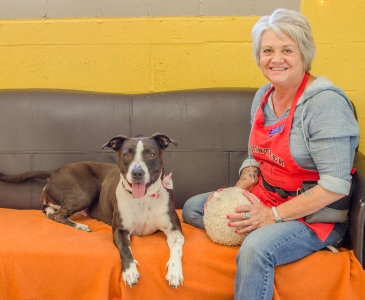 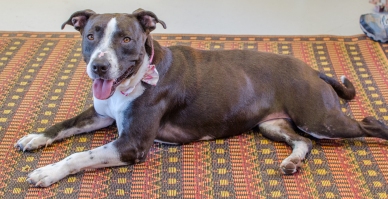 Some family is going to be mighty lucky to adopt this entertaining, joyful girl!

I’m new here. Everyone is nice, but I can’t wait to find a new family!

I met Bentley (what a great dog name!) for the first time on Sunday and loved his willingness to pose with a big grin. 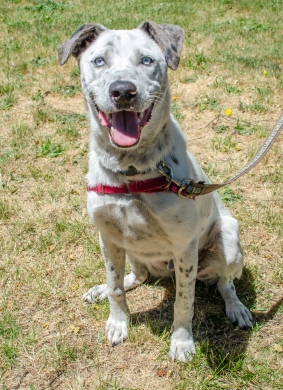 Bentley is a big seven-month-old, enthusiastic, though shy at first, puppy. He is a Lab/Australian Cattle Dog mix with a great sense of humor. He was adopted once, but being an active youngster, he was too much for the older couple. However, they had only great things to say about him. He loved being with the people and sleeping with them. He let them know when he needed to go out and never had an accident indoors. He was a good listener and tried to please them, and he loves rope toys. He was loving and went on errands with his people. But the couple decided he needed a more active family. Bentley has a good history with children, but because he is jumpy and can be mouthy in his excitement, would be best with children ten and older. His original owner reported that he will chew on children’s toys left around, but never on furniture. In WHS playgroups, Bentley is a bit choosy about his friends, but with those he likes, he throws himself into play. Bentley needs a family who will continue the positive training he is getting at WHS, as well as plenty of exercise. He walks well on leash, checks in with his walker frequently, and takes treats gently. He will become a much-loved family member. Here he was on Sunday with Marianne.

Volunteers Linda and Marianne and I spent some fun time with Biscay in Mary’s Place. Linda had some home dog videos to show us. Biscay is a terrific dog in so many ways. He has been hanging out with staff and volunteers at the shelter since February 3rd. He is a two-year-old mixed-breed boy. 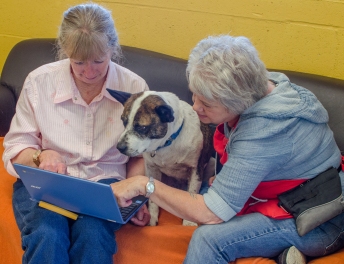 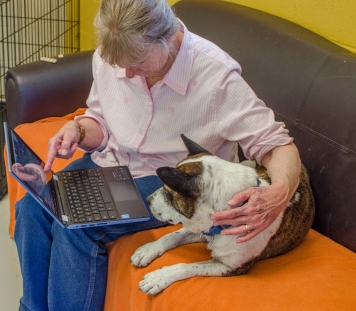 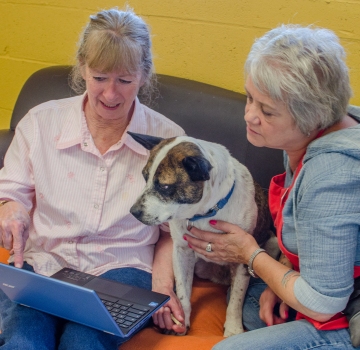 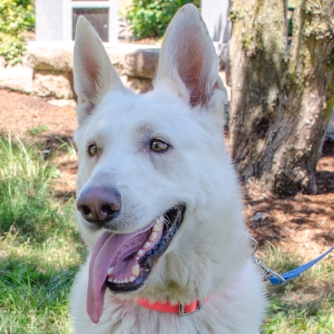 Rascal is a one-year-old American Staffordshire Terrier mix and is one of our Behavior and Training dogs. Here he is with volunteer trainer Linda.

This is Onyx, a one-year-old German Shepherd mix, here with Elizabeth. 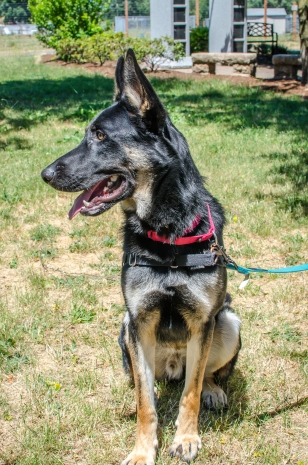 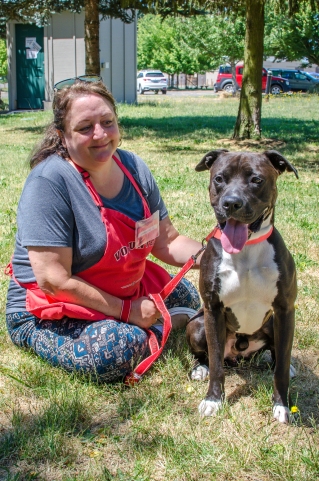 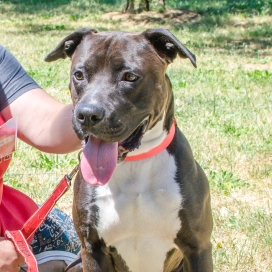 Pixie is a ten-year-old Miniature Pinscher mix who is so gentle and tolerant that she will be great with kids as young as five. She is house-trained, affectionate, and loves attention. To say she is overweight is an understatement, but since she is quite sensitive about her size, we will simply say she’s on a diet and leave it at that. Here she was with Jenna.

Full disclosure, Pixie is quite outspoken about her feelings.

Of course we couldn’t end the day without spending time with Summer, a four-year-old mixed-breed girl. Last week she wanted to show you how she could read. This week she wants to make it clear that she is a lap dog through and through.

And don’t even think of trying to fool her with puppets! 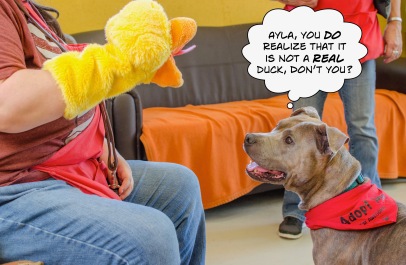