I’m starting this post with spectacular adoption news. If you are a regular reader of my blog, you have read about Biscay since February. And while every adoption is special and we are happy to see our shelter dogs go to great new homes, there are some who have waited so long and become such favorites, that when they are finally found by their new family, we are ecstatic. Biscay arrived February 3rd as a transfer from a Texas shelter to which he had been transferred from still another shelter. We have no idea how much of his life, about two years, he has spent in shelters. While he arrived at WHS with a few issues, among them poor kennel presentation, he blossomed with staff and volunteer attention and training into a sweet, loving boy. I featured him over and over in my blog posts, but still he sat in his kennel while potential adopters walked past him. Then last week a couple contacted me through this blog. They had fallen in love with Biscay’s pictures and story and were coming to meet him. They did, and took him home! His name is now Jake, he is living out in the country and thriving. What a perfect new beginning! Marianne went to tell him goodbye for us and took this picture for me. He wanted to thank everyone before he left. 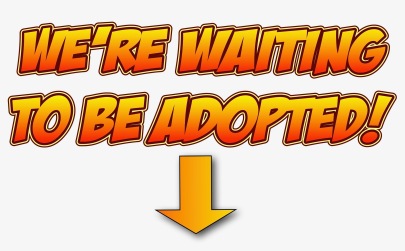 I’m a little shy, but I’ll warm up and be your very best friend!

Darlene is a nine-year-old Chihuahua mix who arrived at WHS June 21. While she is quite timid initially, she soon is seeking attention and enjoying interactions with people. At only eight pounds, Darlene will be a wonderful lap pal once she feels safe and at home. Darlene is house-trained and walks well on leash. Her former family has many nice things to say about Darlene, including that she loves to play fetch and will play non-stop, that she is very affectionate and bonds quickly with her person, and that she does not like to be left alone. Perhaps someone retired would be the perfect fit for this sweet girl. Darlene has been attending WHS play groups, spending time in the “mellow yard” where she mingles with other dogs, but not actually playing. Because she is a senior and shy, a quiet home with older, calm children or just adults would be ideal for Darlene. Before she goes home, Darlene will have surgery to repair a hernia, have a dental cleaning and be spayed. We’re hoping she’ll soon be snuggling with her new peeps.

Here she was when I first met her, feeling uneasy and looking serious.

Here she was on one of her first walks with Frank and Kaylee. She was still feeling nervous. Notice the tucked tail and closed mouth. 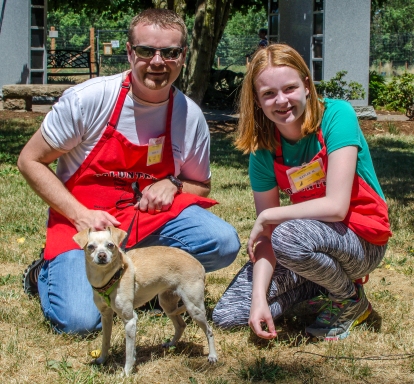 What a difference a week makes! Here she is on Sunday with Patty, showing her affectionate, happy self. 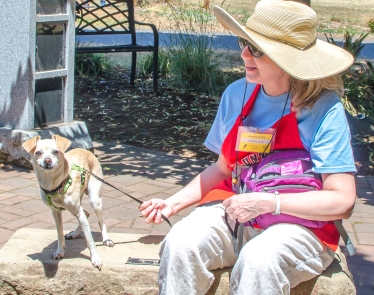 I’m very popular with the Behavior and Training Team. Just ask them!

Neptune is a one-year-old American Staffordshire/Bull Terrier mix. He came to us as a stray, so we don’t know his history, but quickly figured out he is deaf and VERY active. This boy loves to play with both humans and other dogs, is treat-motivated, and a quick learner. He arrived on February 5 and has been waiting for his perfect match of a person ever since. Not surprisingly, since he cannot hear, he has a few challenges. For example, he is startled by sudden movement, an issue on which the Training Team has been working with him. This youngster has grown both in size and muscle during his time at the shelter. Here he was shortly after he arrived. 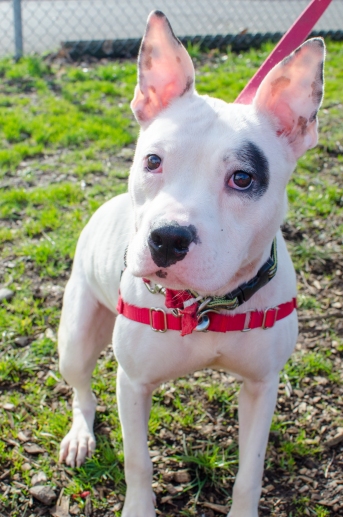 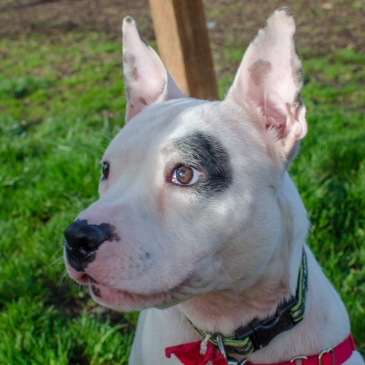 Needless to say, he won my heart with this look!

Our Behavior and Training manager, Chelsea, is one of Neptune’s biggest fans. Here are some pictures she sent from a play session they had recently. Such a happy boy!

Here is what Chelsea says about this very special dog.

“If anyone is looking for an endearing, silly, busy dog, Neptune is your guy. He loves plushies and tug, and his cute snorts and grunts will keep you laughing while you play together. When you’re done playing, enjoy listening to him snore!

We recently found out that he ADORES men. We’ve never seen him happier than when he climbed onto a man’s lap to smother him in kisses. Don’t worry, he can be affectionate, playful, and engaged with women as well. This guy is also very social with dogs; if he goes home with a dog, that dog should be all about chase and wrestling games and be very tolerant of youngsters and all of their antics.

Neptune has a sensitive, cautious nature. Our training team been working on building his confidence and trust, as well as training life skills, since his arrival in February as a stray pup. He is looking for someone who is seriously committed to rewards-based training to continue to help him. He is deaf so has been learning visual cues and is bright and food-motivated. He’s looking for an adult-only home.”

On Sunday, Mona, one of our volunteers on the Behavior and Training Team, came to take Neptune home as a foster dog. They agreed to let me take some pictures before they left. 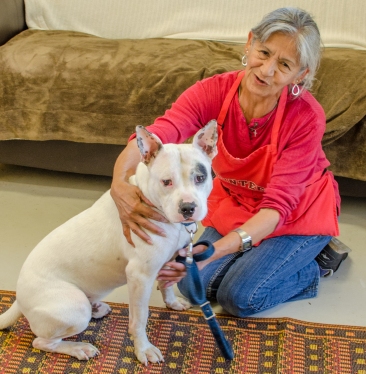 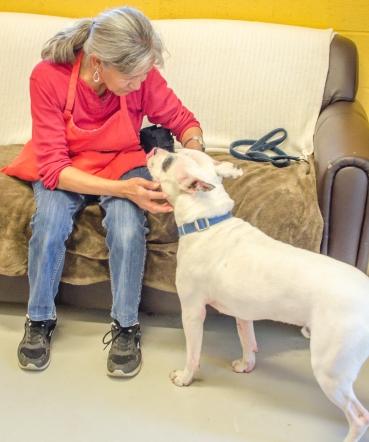 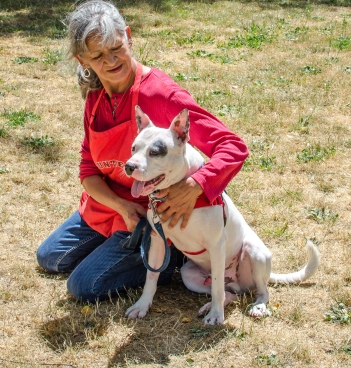 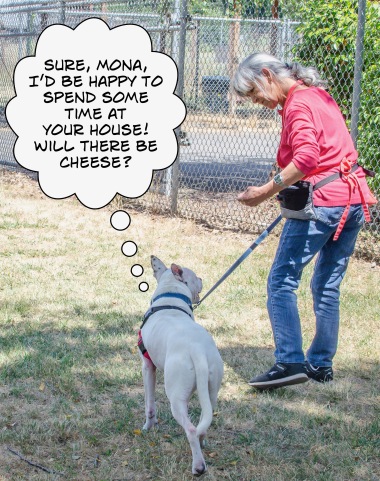 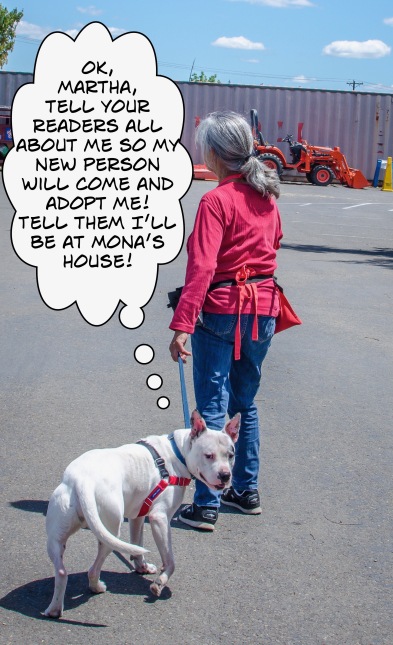 Yes, I’m a big dog, which means I have a big heart!

I met Kia for the first time on Sunday and she is one of the most gentle dogs we’ve had in a long time. Kia is a five-year-old Mastiff/Retriever mix and, at 118 pounds, she’s a big girl. She actually needs to lose some of those pounds, as she has arthritis and less weight would be easier on her joints. The first time I saw Kia, she was taking her afternoon Sunday walk with Gail, who had fallen in love with her. I knew right then I wanted to spend more time with her later in the day. 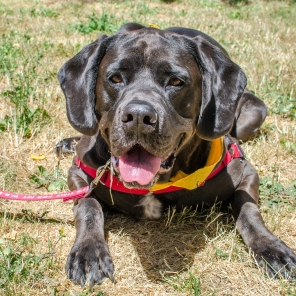 Kia is house-trained, walks well on leash, has been around kids and done well. She is friendly to everyone and knows several commands. She loves to play fetch for short periods and when she’s tired she lies down to let you know she’s done for now. While playing, she will bring the ball back and put it in your hand. She is dog-selective, so would need to meet any dog she was going to live with. Later in the afternoon, Jenna, Marianne, and I took Kia into Mary’s Place and she loved it. 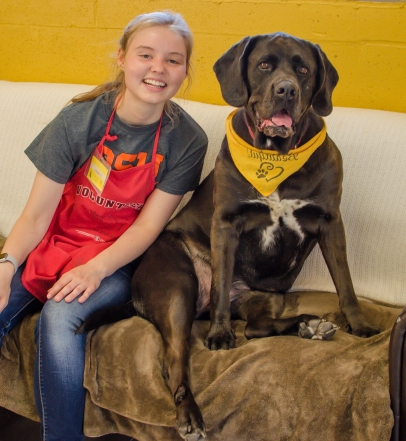 We played a little fetch and Kia had fun and let us know when she had had enough. 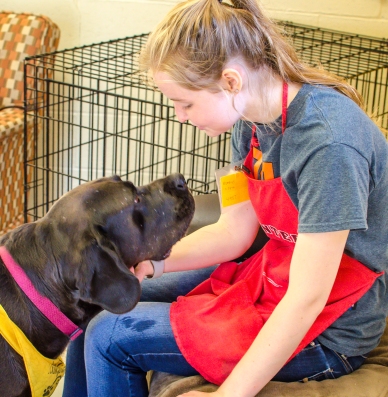 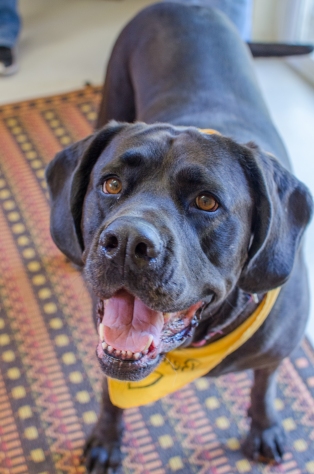 She made it clear that it was time to just hang out. 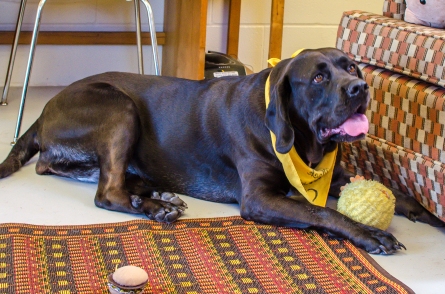 And hang out, we did.

Kia will be a wonderful, easy-going companion who will be happy with strolls around the neighborhood and short ball games. A family will be very lucky to adopt her. 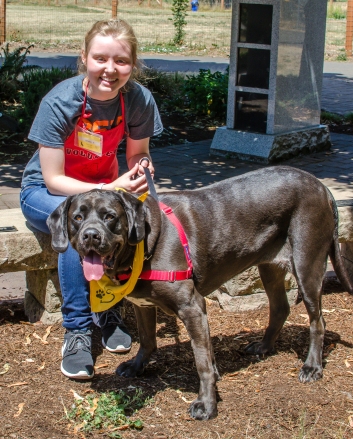 Garth, an Anatolian Shepherd mix, is still waiting for his perfect fit of a person. Such a handsome boy, here with Elizabeth and Shannon. 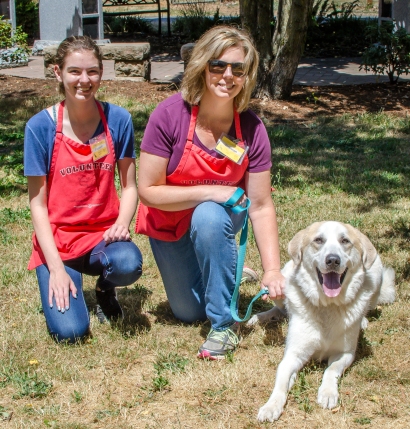 Hoagie is one of our Behavior and Training Team dogs, still waiting for his “just right” person, too. He is a three-year-old Retriever mix, here with Francis. 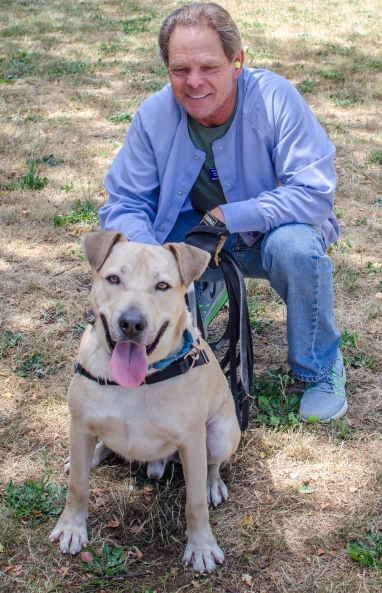 Sweet senior Roxie, an eleven-year-old Rottweiler mix, is also still waiting for her new family. She had a fun time Sunday with Patty.

Rascal, another Behavior and Training Team boy is a one-year-old American Staffordshire Terrier mix, with trainers Linda and Mona.

He has quite a sense of humor and loves to tell jokes to anyone who will listen.

And on that corny joke, that’s it for this week! 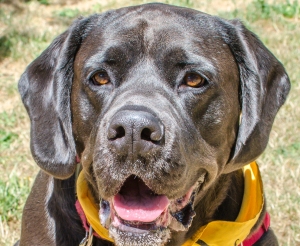