In this post I’m going to introduce you to two delightful new arrivals and revisit a favorite who is still waiting for her new home. All three are American Staffordshire Terrier mixes and all three are hoping to find their forever families soon. 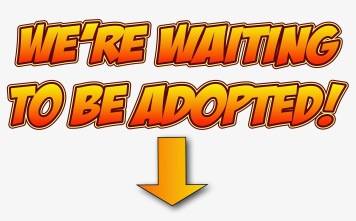 I’m no youngster, but if you want love and companionship, I’m your girl!

Nola is an extremely sweet-tempered ten-year-old American Staffordshire mix, and she knows stuff! She responds to sit, shake, speak, and down. She has a great history with kids, but since she has some age-related arthritis, they will need to be dog-savvy and gentle with her. She also has good histories with cats (she ignores them) and other dogs. Nola walks well on leash and is treat-motivated; she especially liked my cheese bits. If you are looking for a bundle of energy, Nola is not for you. She is more of a couch-potato kind of girl. I first met Nola when Marianne brought her to the yard for her “photo shoot” on Sunday. 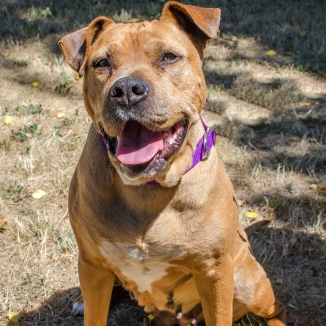 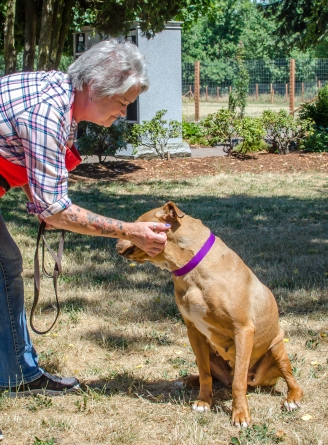 We had already fallen in love with her when this happened. You see, when you are an older dog, you’ve learned a lot about people over the years. 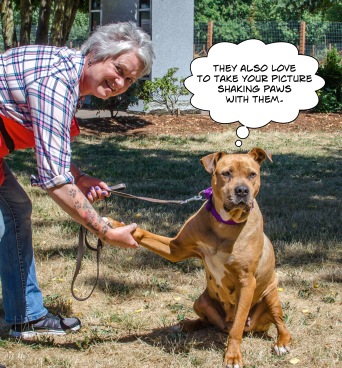 We took Nola into Mary’s Place for some couch-potato kind of hanging out. We all had a great time.

Since the shelter was open, Nola heard potential adopters in the hallway. 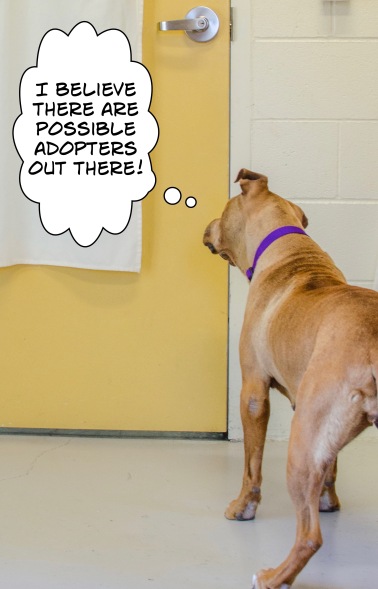 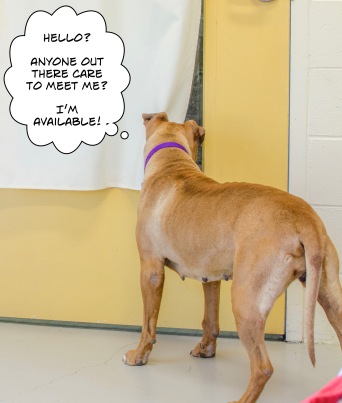 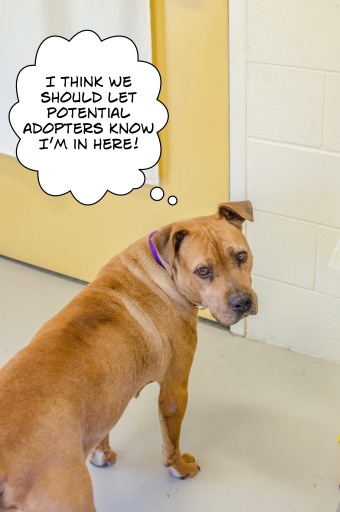 Later, after all the dogs had been walked, Francis took Nola out again to relax in the shade. He attached a long leash to her collar so she could wander. He didn’t need to…she’s not a wanderer. She loved just being with him and almost fell asleep. 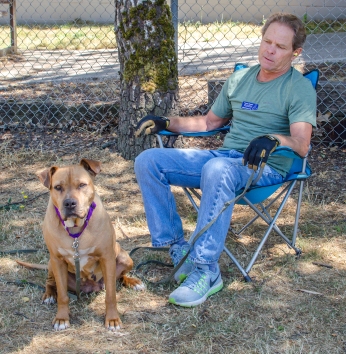 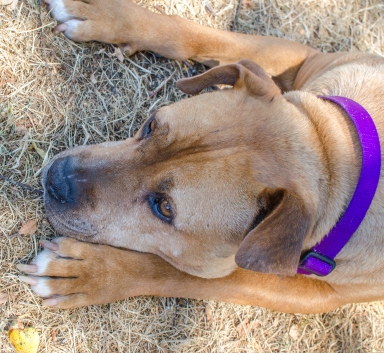 This extremely gentle dog needs a loving retirement home. And there is a family out there who will be very lucky to adopt her.

Looking for a dog with energy? I’m your guy!

Boomer is a five-year-old American Staffordshire Terrier mix who absolutely LOVES people and to entertain them with his play antics. He came to us from a rescue which had fostered him for several months. Before that he was in a sad situation where he had lived in a backyard on a chain and was very thin. Boomer is now a robust 75 pounds of enthusiasm. I first met Boomer when Marianne brought him out for pictures a couple of weeks ago. We both could not keep from laughing at this goofy character’s personality. Boomer sees everything as fun waiting to happen.

Boomer loves older children and would be so happy to live with kids about thirteen and up. He knows several commands including sit, down, shake, and stay. He will need to be an only pet, but believe me, he is all you will need! His foster thought he may have some separation anxiety, so a family where someone was home most of the time would be good for Boomer. Later in the afternoon, we took Boomer into Mary’s Place to play. And play he did! 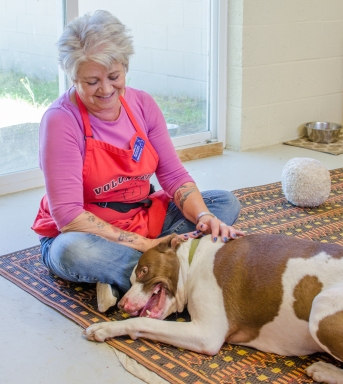 He wanted to show off his favorite stuffed toy to Caroline. 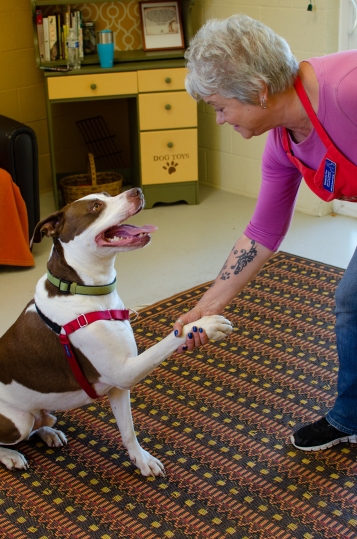 Boomer has had some challenges in his life and yet he’s one of the most joyful dogs we’ve ever met. We’re hoping he’ll get an understanding, loving forever home soon. 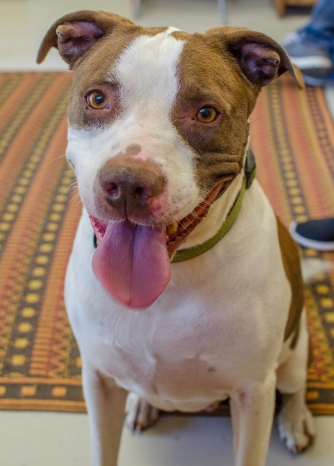 I’m still here and I can’t wait for my new family to find me!

Summer arrived at WHS on May 5th and I remember that Marianne could not wait for me to meet her. Summer is a four-year-old American Staffordshire Terrier mix. She came to us with a chronic ear infection which is now under control with medication, but it will need to be monitored and possibly treated for the rest of her life. We are hoping that this condition will not deter an adopter from taking this sweetheart home. While WHS was evaluating her medical issues, she had two “holds” from interested adopters. However, when Summer was finally able to go home last week, both families were no longer interested in taking her. So Summer is again waiting for her forever family. 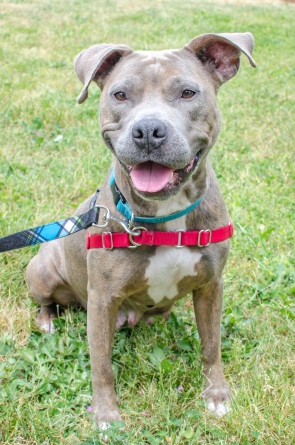 Summer can be picky about her dog friends, so will need to meet any dog she goes home with. She also is nervous around children, so older teenagers, fifteen and up, would be perfect for her. Oh yes, and no cats! They are just too easy to chase. Summer has been learning new skills during her stay at the shelter. Here are a couple of her accomplishments during the last few weeks.

“Leave it” is an important command to have under your collar. 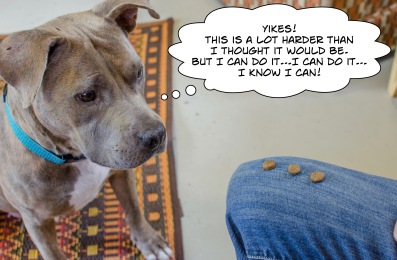 Summer has a lot of time on her paws at the shelter, so look what she decided to learn! Who would have guessed she can read?!

Marianne and I always spend time with Summer when we are at the shelter. She loves to hang out in Mary’s Place with us. However, sometimes when we get too busy visiting, Summer tunes us out, as she did a couple of weeks ago.

Here are some pictures from last Sunday afternoon. Summer is getting stressed after being at the shelter since early May and is barking more in her kennel and when she first sees strangers. We’re really hoping she’ll be adopted very soon so she can decompress and settle into a new family who will love her as we do. 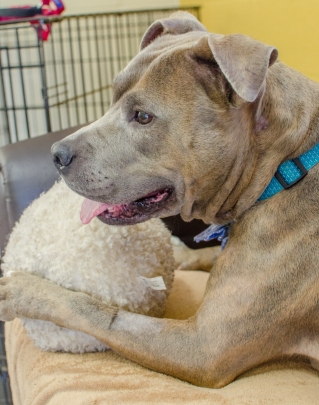 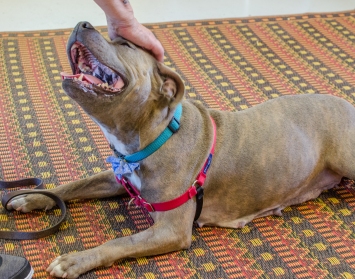 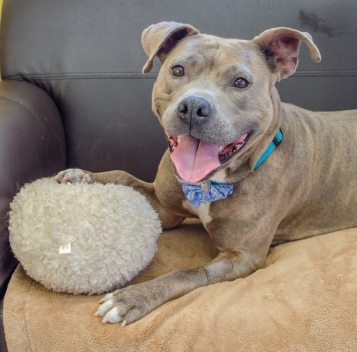 Here she is with two of her biggest fans, Ayla and Marianne.

Garth is a two-year-old Anatolian Shepherd mix, here with Marianne. 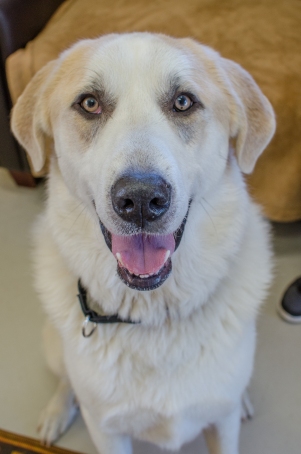 Casey is a nine-year-old Terrier mix, here with Gail.

Roxie is an eleven-year-old Rottweiler mix, here with Patty.

Pixie is a ten-year-old Miniature Pinscher mix, here with Jenna. 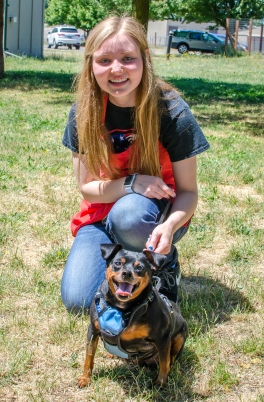 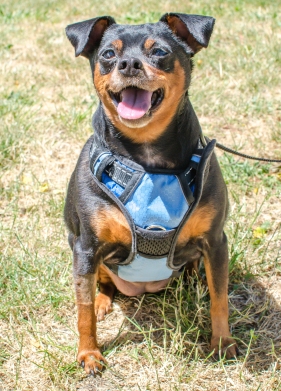 Well, they got a jackpot of a home where they are adored even though they are far from perfect. Last week WHS got this update about them.

“Hello, Tucker and Kota are doing so good. They are a handful at times, but the sweetest. We took them camping and they did fantastic. Had such a blast, this week we’re gonna see how they do with swimming! We have had a couple of issues here and there, x-box controller chewed up and they managed to jump out my window after a cat this morning but they are perfect.” 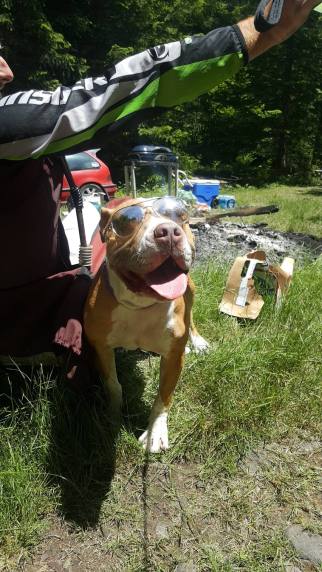 On that very happy update, that’s it for this week! 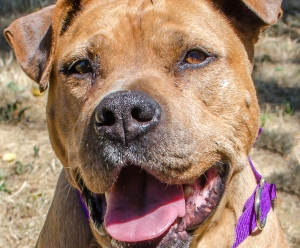