It’s the week before Christmas and all through the shelter, the dogs are hoping for their own happily ever afters. Harley reminded me of that when he arrived in Mary’s Place on Sunday. 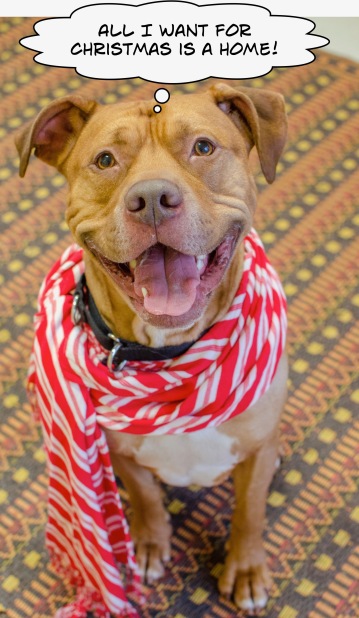 It was our annual Santa Dress-Up Day and while it rained buckets outside, we volunteers and dogs had a wonderful afternoon donning various holiday hats and scarves and posing for photos. Well, in the spirit of full disclosure, some of the dogs thought the whole idea of dogs in hats was ridiculous, and let me know in their own individual ways.

Meanwhile, back to Harley, who couldn’t have been more enthusiastic about dressing up. Of course, Harley is enthusiastic about doing ANYTHING. I first wrote about Harley in my December 5 post, but he still has not been found by his forever family. He arrived at WHS on November 2 because his family was moving and couldn’t take him. Harley is a five-year-old American Staffordshire Terrier mix who is a delightful, fun dog. He has never met a toy he doesn’t like, (the squeakier the better) or a treat, for that matter. He is house-trained and has lived with cats. He was fine with “his” cats, but would bark at outdoor ones. Because of his size and exuberance, Harley will do best with older children. He takes treats politely, knows basic commands, and walks (pretty) well on leash. He is a rough and rowdy player in our playgroups and is selective on what dogs he chooses as pals, so would need to meet any potential dog siblings. As always, he was a hoot in Mary’s Place and didn’t mind playing along with our Christmas dress theme. He did insist in having his very loud squeaking toy in his mouth the entire time, however. Marianne and the rest of his fans couldn’t stop laughing. 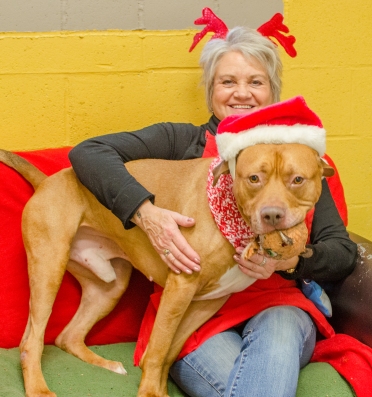 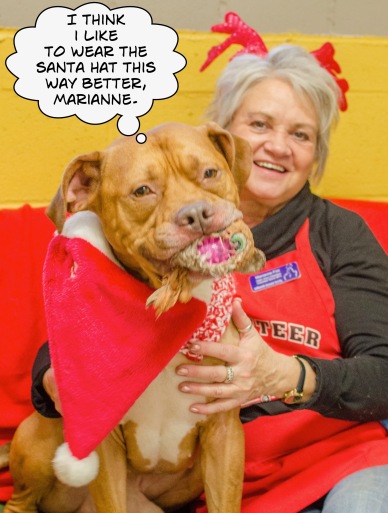 I’m not the handsomest dog here at the shelter, and my kennel presentation isn’t the best (sigh). But they say I’m a “diamond in the rough,” whatever that means.

Joey arrived at WHS from our sister shelter in Maui, Hawaii on November 29. He is a sixty-pound mixed breed, about five years old. Joey must have had a rough beginning to life, as he has some scars and some skin inflammation, which is slowly improving. He also is quite stressed in the kennel environment, so barks, causing potential adopters to walk past him. But, oh, what they are missing! Joey is a wonderful dog. Once he is away from the noisy kennels, he shows his true personality. Joey loves people and has a great time with other dogs in our playgroups. He gives other dogs polite greetings and enjoys romping with them. On Sunday we took him into Mary’s Place where he basked in our attention, even though he didn’t quite understand the dress-up part, so asked Megan. 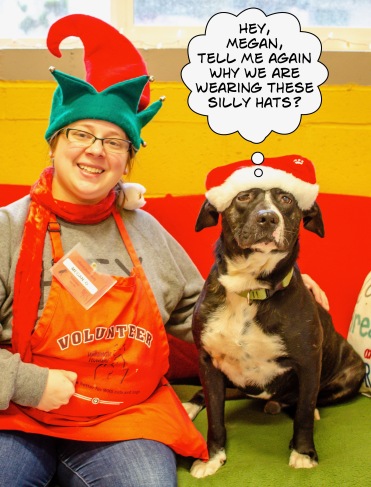 He wasn’t convinced that the hat went ON his head.

Joey is sure that Santa will bring him a new family.

If you’re looking for a cuddle buddy, I’m your guy!

I wrote about Clay in my last post, and I usually don’t write about a dog twice in a row, but I can’t help myself. This boy is has stolen so many shelter volunteers’ hearts. Clay is a four-year-old American Staffordshire Terrier mix. This is his second time at WHS; he first came as a California transfer dog in 2017. He was adopted but surrendered on November 23, when his family couldn’t keep him anymore. And while he can be playful and active, he also settles down quickly and his favorite thing to do is just be next to his person. Clay is house-trained and knows several commands including sit, down, come, and stay. He rides well in a car and is “gentle, friendly and playful” says his former family. Clay does need a cat-free home. He’s afraid of the vacuum and baths. Clay loves kids and has lived with children ages thirteen and six. He can be uneasy and nervous in new situations and with strangers, so needs some understanding and patience in building his confidence. He loved his time with us in Mary’s Place on Sunday and enjoyed trying on different Santa-type attire. And who would have guessed that this boy would actually break into a Christmas carol! He’s become Marianne’s current favorite shelter dog.

Jacob is a seven-year-old English Cocker Spaniel mix. He probably will have to be on some medications for the rest of his life to treat chronic ear infections and dry eye. He also came extremely matted, in great need of grooming and a bath. Our wonderful volunteer groomer, Ayla, gave him a very much appreciated makeover. He wasn’t totally sure what he thought about wearing a Santa hat initially.

But he soon got into the spirit of the day. 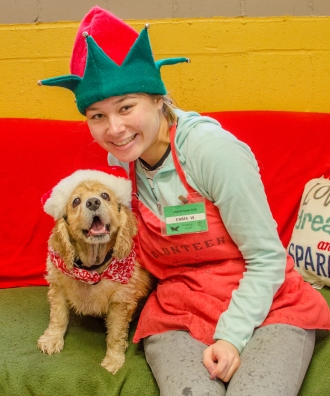 Hans, a four-year-old German Shepherd mix has been waiting for his perfect family fit since November 17. This big boy (83 pounds) will need an active family and plenty of exercise. He does well with older kids and knows some basic commands. He needs a cat-free home. He was a hoot in Mary’s Place on Sunday. He’s Haylee’s current favorite.

Jack Fancy is a six-year-old German Shepherd mix. He hasn’t had an easy life and is looking for a home with only adults who will be patient with him and help him learn to trust. This boy is eager to learn and will be a wonderful companion to the right person. Both Marianne and Julie have fallen in love with him. 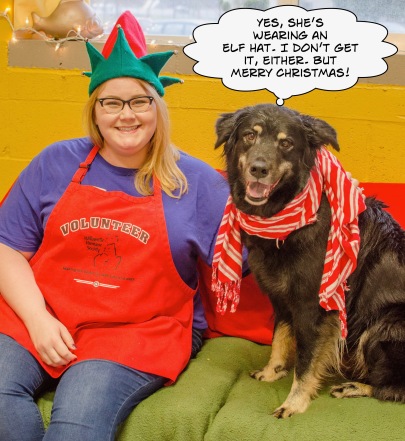 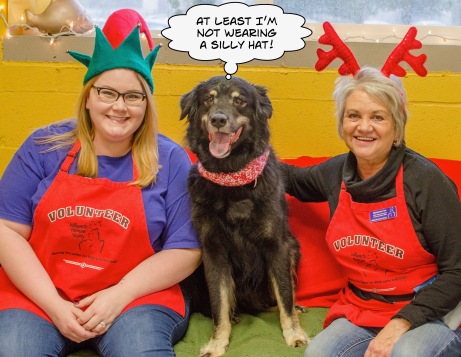 Texas is a two-year-old Boxer mix who is a newbie to the shelter. He is house-trained, loves people, has lived with a cat successfully, and would like a family with older kids. He has lived with another dog happily. Texas is adjusting to the shelter environment and is still nervous, but once in Mary’s Place he fell right in with the holiday fun. He loved Haylee, Caroline, and Marianne. 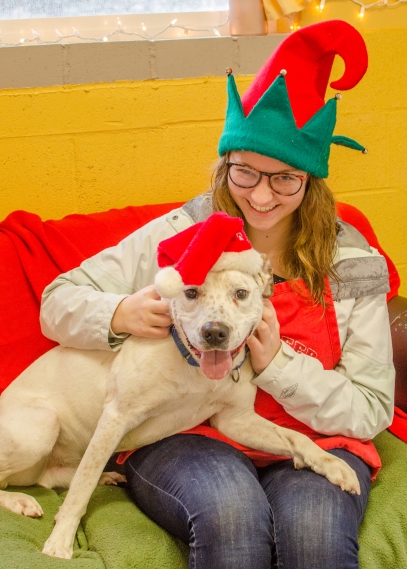 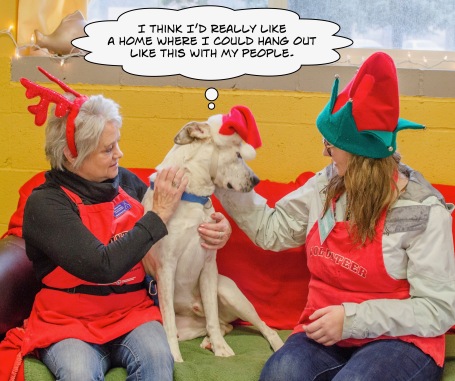 Jack asked to have the final word before a wonderful update!

I was thrilled this afternoon when I received this update about our sweet, shy Bonsai. Here he was at WHS.

And here is his update! So happy for our boy!

“Here is an update on our Bonsai. He is adjusting well at his new home. He has settled into a good routine for his day, including potty times, feeding times and playing times. He loves to sit on the couch with us and cuddle, maybe because he gets lots of scratches. We walk him daily on the same route and he is getting more and more confident when walking. He went to Theresa’s work today and met many people and did real well. He even let a few give him some scratches. While there he saw himself in a reflection of a window and did get pretty freaked out. We are considering getting a mirror to put in the house so he can get used to seeing himself and hope it might help his interactions with the casual other dog he might meet. Overall he is doing really well and loves to play with his toys he has and play fetch with them in the house.” 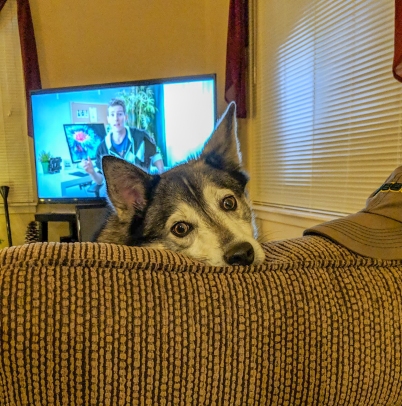 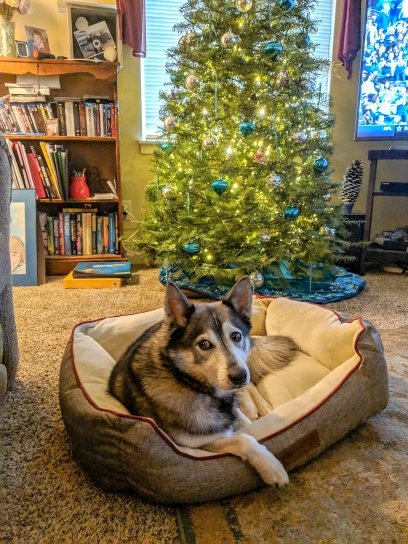