Sometimes dogs arrive at a shelter as strays and it’s obvious that they have had a rough life so far.  In this post I’m going to tell you about two such dogs who though they had difficult beginnings to their lives, in very different places, they remain loving and optimistic about their futures.

I’ve been waiting for my perfect fit of a family for a long time. Is it YOURS?

When Joey was brought in to the Maui Humane Society in Hawaii on October 20, 2018, he was in terrible shape. He had open wounds and staff thought that maybe a wild pig had attacked him. But even with all of his physical injuries, Joey loved his new peeps and quickly became a shelter favorite. He went to a foster home to recover and his person adored him. She wrote: “Joey is doing great!!! What a cool dog, great around other dogs, house-trained, very loving, a real sweetheart!!!  I would be happy to keep him as long as you like. I wish I could keep him.” But Joey was not adopted at MHS and staff decided he might have better chance of finding a forever home if they sent him to us. The day before his flight to Oregon, his foster mom wrote: “What a wonderful dog.  I am going to miss him so much.”

Joey arrived at WHS on November 29, 2018. It was guessed he’s about five years old and a cross between a Lab and Border Collie. He has been quite stressed at the shelter and his kennel presentation has not been great. He was adopted once, but returned. The man loved him but realized Joey needed a more active home. He would really like to go home with children about ten or older. He does great in playgroup, but needs to meet any dog he might go home with to make sure their play styles are compatible. He will need a family with some patience, consistency, and willingness to give Joey some refresher house-training; with all the changes in his life, he has slipped at bit.

On Sunday, Joey announced he had a new idea to help him get adopted.

How could I resist?

I’ve written about Joey several times in this blog. We’re hoping he won’t have to wait much longer for his new family.

I’ve been healing for quite a while. I’m ready now for my forever home!

Brutus, about a two-year-old American Pit Bull Terrier mix, was found as a stray and brought to WHS on November 6, 2018. He had been seen wandering for over a week when he was picked up. The officer who brought him in noted that he was a nice dog, loved people, knew basic commands, and enjoyed the car ride.

But Brutus had some physical issues. Besides having multiple puncture wounds, his left front leg was swollen. When our WHS vet checked him, she discovered that his leg had been broken much earlier and had not healed correctly. In addition, there were loose bone fragments that had caused infections around where the break had been. So when he was under anesthesia to be neutered, his leg was cleaned up, the bone fragments removed, and his leg was splinted. He was put on antibiotics to cure the infection and the healing began. Finally, on February 21st, the splint off and the infection gone, Brutus was ready to be adopted. Having had such a severe break and lack of proper early care of it, he will likely have arthritis in his left leg. But that doesn’t concern him now. Brutus is a very happy dog. He walks well on leash, loves attention and affection and is rated for kids eight and older. We took him into Mary’s Place and had a blast. Brutus LOVES toys, especially soft ones. In his excitement, he tends to grab them out of your hand, so until he learns “leave it,” we need to be careful that he doesn’t accidentally grab a hand instead of the toy. Here he is with Caroline, one of his many fans.

Brutus could be a professional “poser” and he knows it. 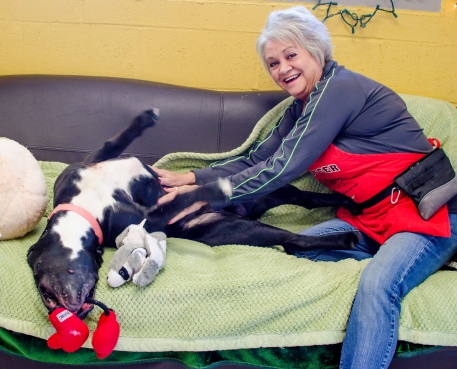 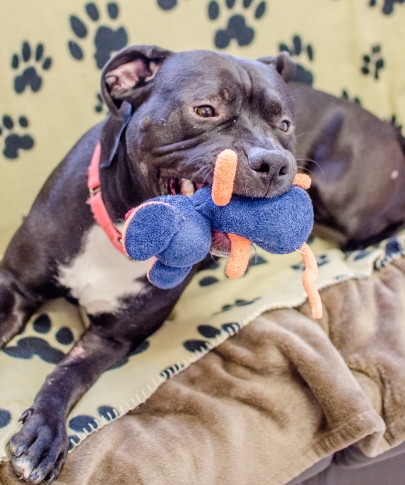 Then we wanted some quiet time, so decided to give him a frozen Kong (filled with kibble). He was in seventh heaven!

When it was time to return to his kennel, he seemed to thank Marianne for all the fun. 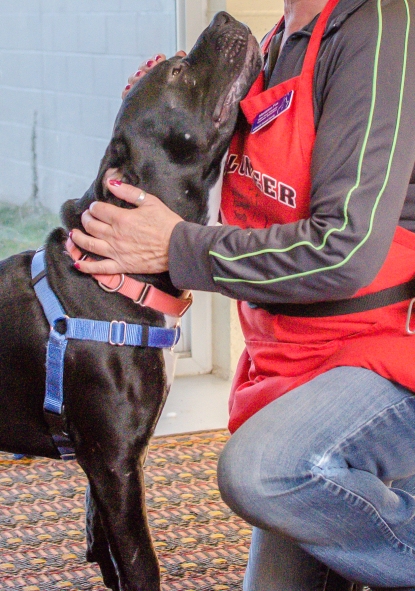 He’s going to be a wonderful dog for some lucky family.

I’m back. My family loved me, but couldn’t keep me. They miss me.

I wrote about Champ several times in my posts after he arrived at WHS in early November. We fell hard for this big boy.

Champ is six years old, a mixed breed, with a huge head! We were so excited when he got adopted and his family adored him, but were unable to keep him. Champ can be fearful in some situations, so has become one of the Behavior Team dogs to help him build confidence. He can be nervous around strangers until he knows them, then he is happy to either play or snuggle with them. Champ is house-trained, knows basic commands, and is rated for older children because of his size. He loves our playgroups, but can be picky about his dog friends, so will need to meet any canine he will be living with. Champ will never be a dog-park kind of dog. He needs a family with older children and his training must be rewards-based and positive to relieve his fears. Staff member Joseph has become one of Champ’s biggest fans and spends as much time with him as he can when he has a break. We asked Joseph to come in Mary’s Place while we were hanging out with Champ and it was so touching to see the bond they have made.

And here he is with Marianne, another of his many friends.

Champ is available through our Behavior/Training Team (behavior@whs4pets.org). We’re hoping the right fit of a family will find this very special boy soon.

As usual, there were some awkward photography moments on Sunday.

That moment when you get the perfect pose of the dog, but the human…sigh.

That moment when the dog cracks a joke and it’s hilarious!

Frieda is a stunning one-year-old Shepherd mix, here with Caroline who fell hook, line and sinker for her. You may notice Frieda’s muddy legs—she came in for her photo shoot right after playgroup! 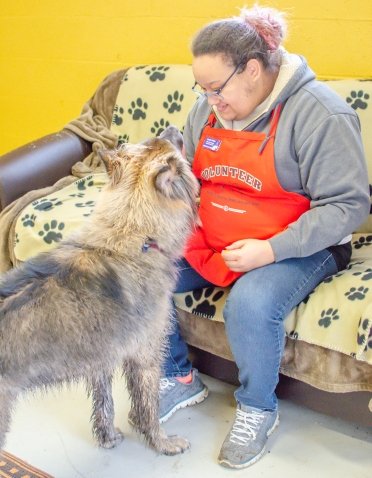 Buddy is a two-year-old mixed breed boy, here with Marianne. 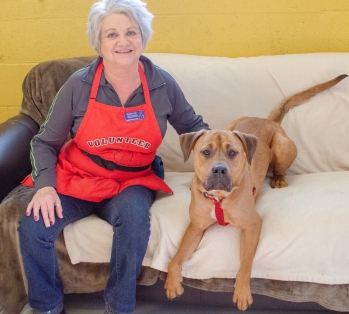 It snowed in Salem last night and today’s shelter playgroup was exciting! Jessi, one of our WHS staff trainers, sent me these pictures from today’s romp. The dogs had a blast! 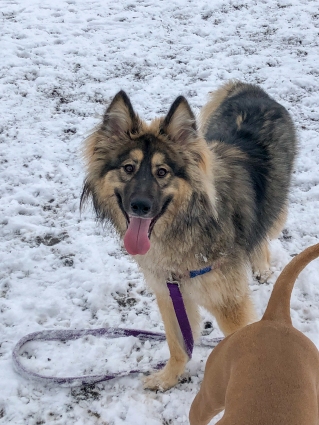 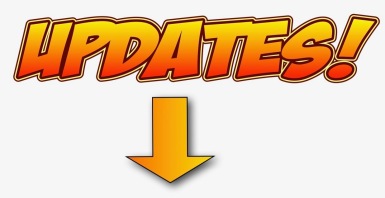 Sadie Mae arrived at WHS full of life and a few issues in early January. She had a ton of energy, was handling-sensitive and somewhat fearful. She had us laughing, however, when during her photo shoot I showed her a bit of cheese. This is what I wrote in my January 28th blog post: “The second Sadie realized I had cheese, she sat, laid down, rolled over, jumped up to spin, lifted her paw to shake, and then started the entire performance all over again!”

We knew it might take some time for her to find her perfect fit of a home. On February 10th, she did. I was thrilled to get the following update last week.

“About four months ago we lost our sweet furry family member to a year-and-a-half long battle with cancer. Our cat was a part of our lives for about 11 years, and so once we had healed after grieving our loss as a family, we decided to adopt a dog because a new kitty would be too hard. Sweet Sadie Mae was one that caught our attention from looking online. When we saw her in the shelter she was anxious, scared, and constantly barking in her kennel—something that we didn’t expect. Once we were able to get her out in a room, she showed a new, fun side of her and that hasn’t stopped since bringing her home. Sadie has been living the life with treats, toys, snuggles, multiple walks a day, and sleeping in/hogging whoever’s bed she chooses at night. Since the first day of being at home she will constantly follow someone or go around checking to make sure everyone is safe. She loves sleeping on her back like a human and being wrapped in a blanket to stay warm, preferably her own pink one. Whenever anyone gets home she has the biggest case of wiggle-butt we have ever seen and she can’t sit still to save her life. Her energy is never ending (which makes it hard to take a good picture) and we are trying to find new ways to tire her out so she’s ready for a nap. On walks she has learned what “take me home” means and can pick out which house is hers on the street. She came with the knowledge of multiple different tricks and will show them off when it comes to getting a treat, but she also learned how to “stay” in about five minutes. We are still working on manners when people come over (socializing in general), like we don’t need to bark at noises, and how to walk on a leash nicely. We are excited to see what obedience classes, more time to adjust, and socialization can do for our sweet girl because in one week she has come so far.”

We are always so grateful when an adoptive family is willing to put in the effort to help a dog with a few quirks so that they become a wonderful best friend. 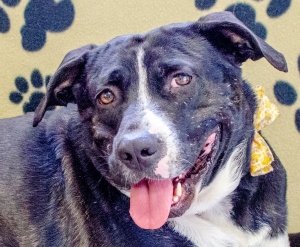