It’s been a busy week at Willamette Humane Society with some especially gratifying dog adoptions. I’d like to start out this post telling you about two of them.

Diesel was one of our Alabama rescue dogs. He came to us after all of the tornadoes when the shelters needed to send out the dogs already there to make room for newly homeless dogs. He was adopted once, but being only a year old, he had too much energy for the older resident dog and had to be returned. But little did he know what lay in his future. I got the following note from Joseph, one of the adoption specialists: “Diesel was adopted by a couple that moved here from Alabama three years ago. They tracked the rescue story and came to look at our Alabama dogs. They decided Diesel was their new friend and he enjoyed playing with their two dogs.” What a great story! 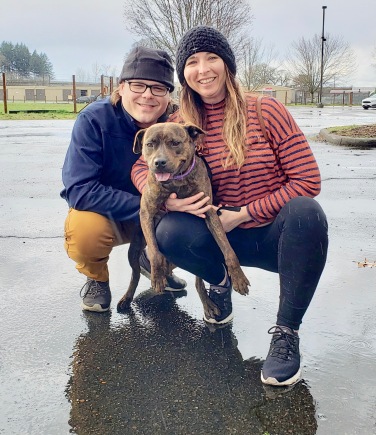 We all fell in love with Chapo when he arrived at the shelter. He was a gentle giant whose gigantic head made us all laugh. At 89 pounds, he was built like a Mac truck! But oh, what a wonderful personality he has! We spent quite a bit of time with him on Sunday and I fully expected to feature him in this post. But then he was adopted in the afternoon! I want to share a couple of pictures of him anyway, along with his going-home shot, that I was so happy to get. Marianne was totally smitten! 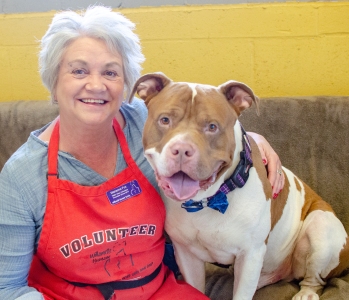 Some dogs do not hesitate to express their feelings. 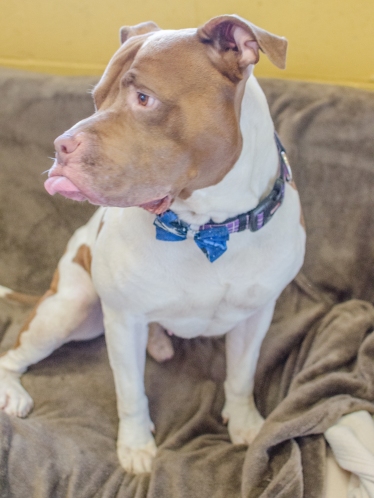 Chapo was very happy to go home with his new family! 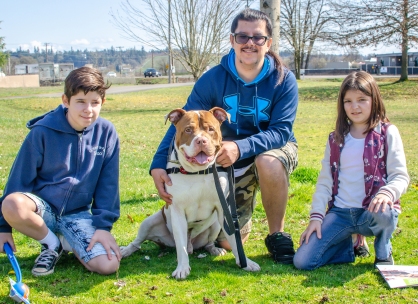 Quite to our happy amazement, several of the dogs I was considering featuring this post have been adopted. So this week, I’ll be featuring just two dogs and adding some Quick Looks.

I may look a bit boring, but just take the time to meet me and you’ll be amazed!

Hubert is a two-year-old mixed breed dog. He came to us from Alabama, flown to the Northwest with about 100 other dogs after the recent tornadoes ravaged the area where the shelter was. I first met Hubert last week and, try as I might, I could not get him to smile, or even really interact with me.

So when Megan suggested that we feature him in this week’s blog post, I was hesitant, wondering if I’d be able to get any interesting pictures of him. Boy was I wrong! We decided to take him out to a yard and see if he’d like to play fetch. Were we ever in for a blast! 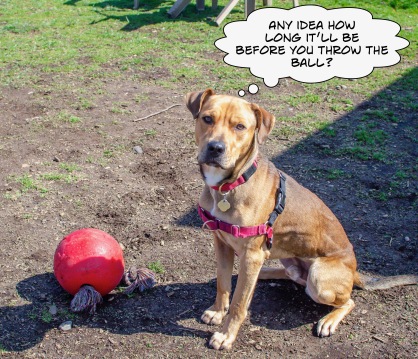 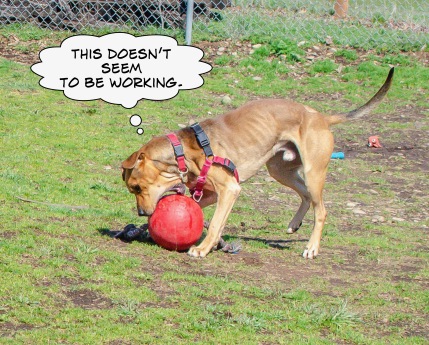 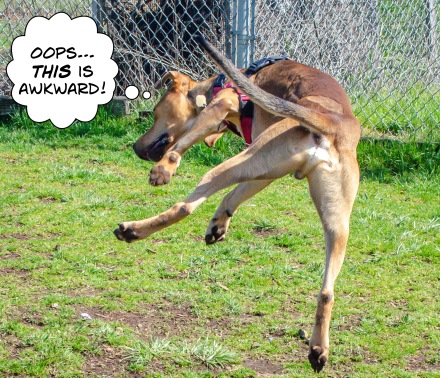 Hubert is such a hoot. His exuberance erupted as he raced across the yard in pursuit of the Jolly Ball. He does need to work on his play manners, as he is so excited about the game, he can become jumpy and mouthy. He’ll need to learn the cue “leave it.” But this boy is smart and a quick learner. Add to that his love of cheese bits and he’ll be fun to train. He would be perfect for our WHS training classes and both he and his new family would bond while improving his manners. Hubert is rated for children ten and older. We decided to take him into Mary’s Place after our romp to see if he would settle. He did. Caroline became another of his fans. 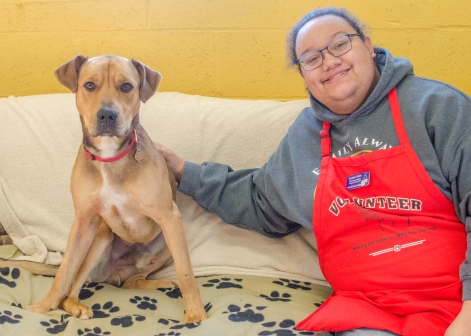 We got out a GFB (Giant Fluff Ball) and Hubert was thrilled. We were amazed at how gentle he was with it.

Still, try as I might, I could not get him to smile. 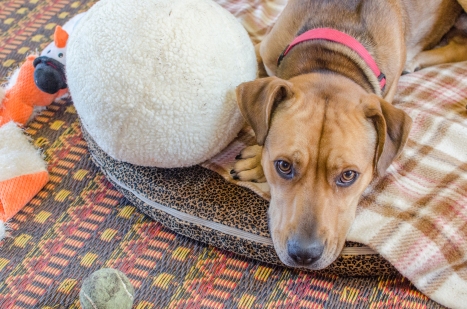 But smile or not, what a wonderful family dog Hubert will be. Yes, he may look a bit boring in his kennel, and that may be why potential adopters have passed him by. But some family who takes the time to meet him will adopt a jackpot of a companion! We’re hoping that family will come soon.

I decided to try once again for a smile when it was time to go back to his kennel. Nope. 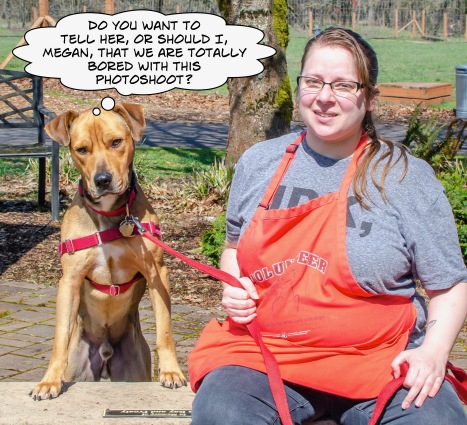 I’m no youngster, but don’t think I don’t have energy to burn!

Jake is a fourteen-year-old Lab mix who is one happy-go-lucky guy. He shows some signs of age with lumps and a graying muzzle, but you’d never know it by the way he acts. 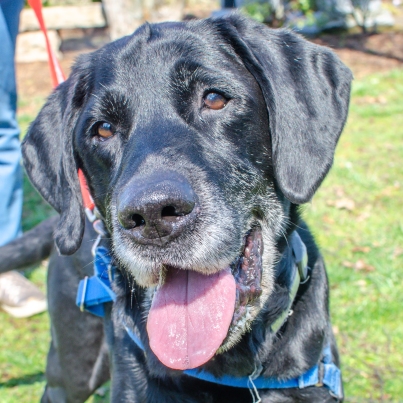 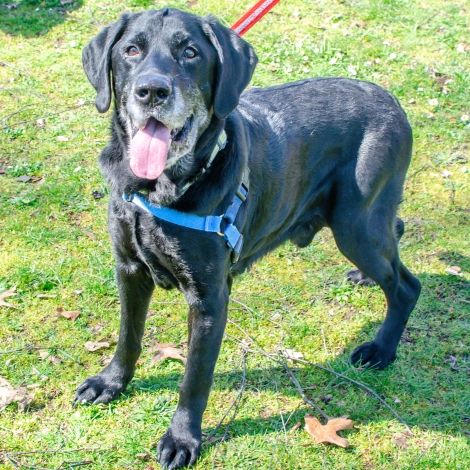 Chauncey took Jake for his afternoon walk on Sunday and stopped to pose for a picture.

Jake has the typically friendly and tolerant Lab personality that begs “Pick ME! Pick ME!” and the attention span of a gnat. He is rated for children about ten and older. He is a goofy, fun, active boy who can’t wait to be adopted by his forever family. He is currently spending some time in a foster home. When he and his pal, Max (who is on hold), were out for their afternoon walks with volunteers Chauncey and Layla, I foolishly thought it would be easy to get a picture of them both looking at me and smiling. This is what happened. 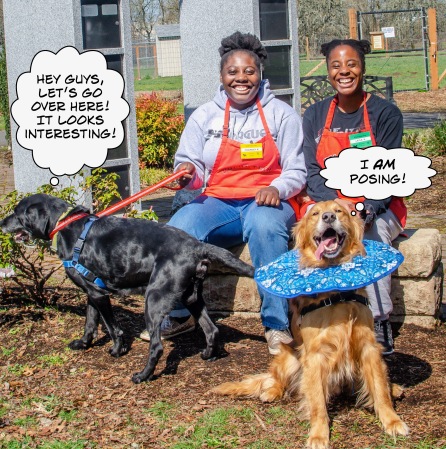 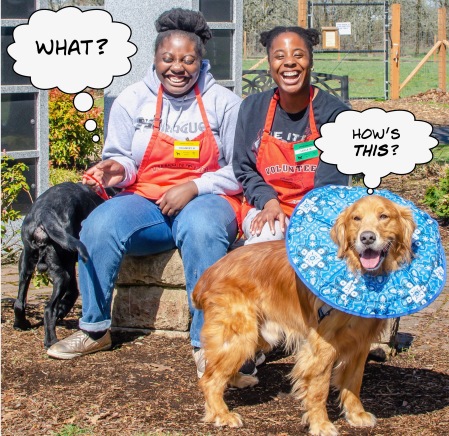 Cybil is an eight-year-old Shepherd mix, here with Marianne. She is a sweet, affectionate senior girl who originally came to us from Hawaii in 2017.

Buggs is a two-year-old Lab mix who enjoyed some time outside with Francis. He’s a very active young boy who LOVES to play fetch! 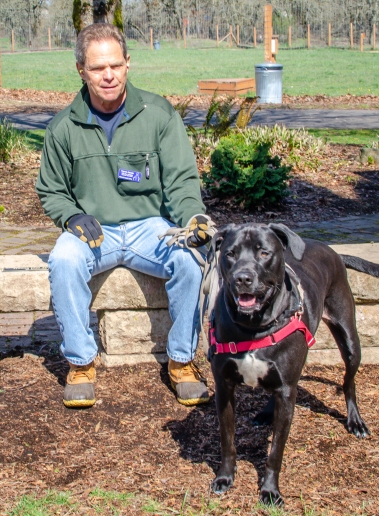 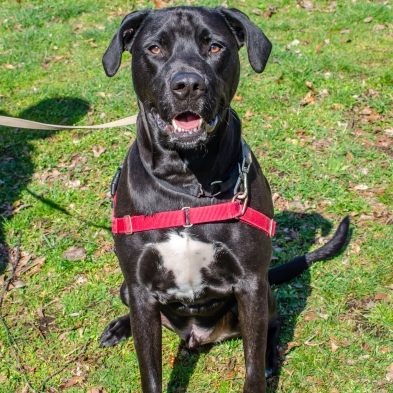 Marigold is a one-year-old mixed-breed girl, here with Linda. Marigold is a rock star in playgroups, adjusting her play style to match whomever she is playing with. 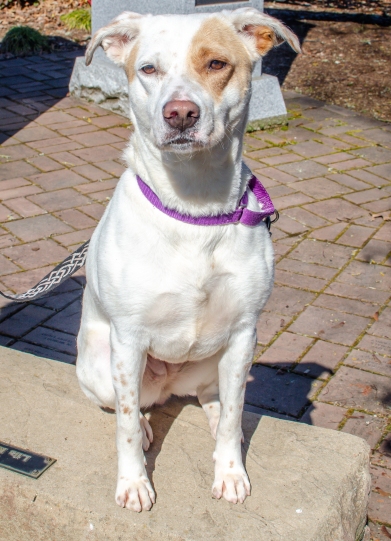 Harmony is a seven-year-old Staffordshire Terrier mix who has quickly become a favorite of Marianne. Here they were on Tuesday; thanks to volunteer Wayne for the pictures! 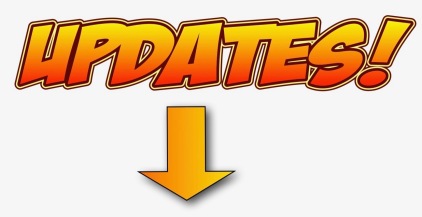 Remember our sweet Montegro from last week who went home with this wonderful couple?

I was thrilled to see this fabulous update a few days ago:

“We gave Montegro a new home last weekend, and he is doing fabulous!! We couldn’t ask for a better dog to fit in with us. We call him Monty, for short. He is constantly making us laugh and giving us cuddles and loves. He also gets along great with his two new cat sisters. All in all, we couldn’t be happier with him, and we can tell that Monty feels the same way with us.”

Murphy was one of our all-time favorites. We spent a lot of time with him while he was at WHS, and he had a large fan club. 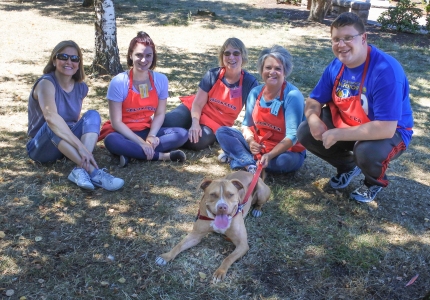 Murphy was found as a stray and was adopted twice, but both times he came back to us. After he was found as a stray for a second time, he did not do well at the shelter. He was very stressed and depressed. We were increasingly worried about him. Then, on August 25, 2016, a couple met him and fell in love. They sent me a happy update some time ago, and last week sent me another one. We are over the moon that this sweet boy, who had not had an easy early life, is now forever basking in the attention of his peeps.

“Hi! Wanted to share a few more pictures of Murphy, who I adopted in 2016. Our favorite picture to show of his smile, his very cuddly nature, and him not being too sure of how to feel about the beach/what it is.”

On those happy updates, that’s it for this week! 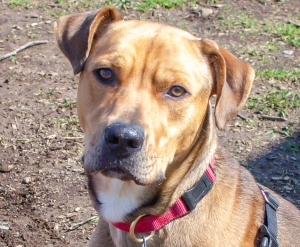 All of the dogs I have featured today, along with other terrific dogs waiting to be adopted, can be found at Willamette Humane Society. Here is the link to the adoptable dog page: