The sun has finally returned to the Northwest, the temperatures are delightful, and Sunday was a perfect day to play outside with shelter dogs. This week’s post is going to be about a bonded pair of senior Chihuahuas and two dogs who are so joyful when romping in a big yard that you can’t help but catch their enthusiasm for life.

We have been BFFs for our whole lives. So how about adopting us both?

Tobias and Snickers and are ten- and nine-year-old Chihuahua mixes, respectively. They have been together as long as they can remember and are best friends. Snickers is the leader and Tobias follows. They need to go to their new home together.

I hadn’t spent much time with this duo, assuming that they would be adopted quickly after they arrived at the shelter in early April. But since they are still waiting for their forever retirement home, we decided to take them into Mary’s Place on Sunday for some quality time, and were we glad we did!

While shy at first when meeting a new person, it doesn’t take Snickers long before he is hopping in your lap, ready for snuggles and love, as Marianne quickly found out. 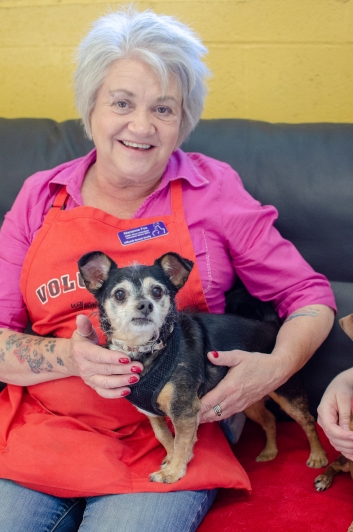 Tobias, on the other hand, is more reserved. He was nervous and chose to watch Snickers’ antics from the end of the couch where he felt safe for a while next to Megan.

We didn’t push him, giving him time to get to know us.

But after a while, he welcomed some attention from Marianne and snuggled against her.

Our patience paid off and, before too long, both dogs were enjoying couch time with us. 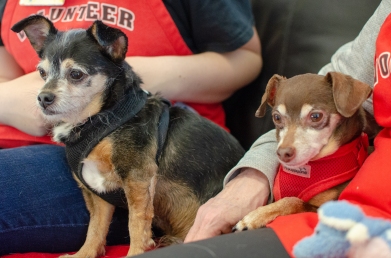 Then we had exciting visitors! Volunteers Diane and Haylee stopped in. Since they walk the boys every week, the dogs were so excited to see them and rushed over to greet them.

Then once again, they settled on the couch. 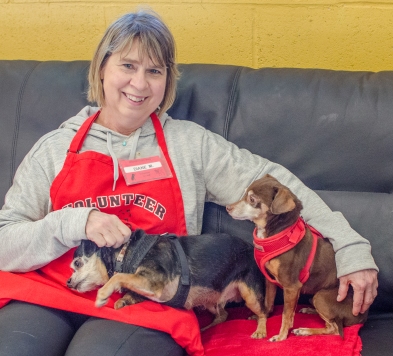 How convenient it is that they BOTH fit on your lap!

Tobias got so relaxed that he started to fall asleep.

Snickers and Tobias will be perfect companions for someone who wants easy-going cuddlers who will be happy with a short walk, a little play, and then lots of couch time. Their only issue is that they sometimes have accidents in the house, so will need an understanding, patient family who will help them with house-training. Because of their size, age, and timidity, they should go home with older children or just adults. We’re hoping that these two won’t have to wait for their perfect peeps much longer.

I’ve been here before! I know the drill! I love to play in the yard!

Zabrina, a three-year-old Bull Terrier mix, first arrived at WHS in 2017, a transfer from our Hawaii shelter partner. I met her, but she was quickly adopted, so I didn’t get to know her well. Last week Zabrina was surrendered back to the shelter. Her family decided she wasn’t happy being an apartment dog. We wanted to get to know this active, happy girl on Sunday, so spent some time with her in Mary’s Place. Then we went outside to let her run. Zabrina only has three legs. She was found by Maui police officers lying on a road with a severe fracture of her back left leg. She was taken to the shelter and it was determined that the best action was to amputate the leg. But don’t think for a minute that she can’t run. This girl is like a freight train! She is very muscular and can keep up with any four-legged canine without blinking an eye. Ayla, Marianne, Caroline, Megan and Zabrina all had a blast in the big yard.

Full disclosure: Zabrina isn’t the best fetch player on the planet. She often drops the ball half-way back to you but keeps on coming anyway. She did love to run, and it was amazing to watch how agile she is.

Zabrina is a very active girl, as you have seen. She needs to go home with kids thirteen and older, as she can be jumpy and mouthy in her excitement to play. She likes most other dogs, but she should meet any she will be living with. She also needs some patience with house-training. But Zabrina is a joyful, affectionate girl who is looking forward to an active family wanting a new best friend.

When it was time to go back in, we stopped for a quick pose with some flowers.

Then one quick stop in Mary’s Place. We hope it won’t take long for Zabrina to find her new family. 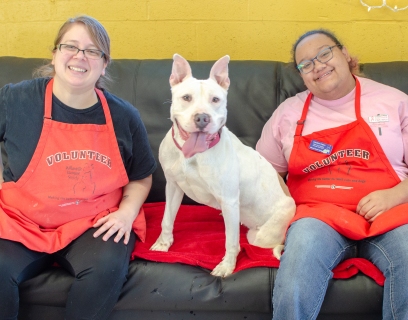 I’ve been here three times. I like everyone at WHS, but I’m hoping that THIS time I’ll find my forever home!

I was quite surprised to see Frank (aka Rocky) back on Sunday. He is a ten-year-old mixed-breed boy who was first surrendered to WHS in May, 2015 because his family’s living situation changed. He was adopted in June of that year, but surrendered again in March of 2017 because his family was moving. I spent quite a bit of time with him and made a movie for him. In April he was adopted a second time. Then a couple of weeks ago, he was back, having been found as a stray. Because we already had a dog named Rocky at the shelter, we had to change his name, so now he is Frank. Although he is ten years old, don’t think for a minute that this boy has lost his zest for life OR his energy! 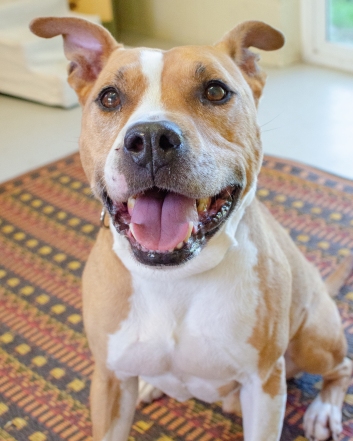 He was very excited when we told him we were going to the big yard to run! While Frank isn’t a fetch-kind-of-guy, he loves to race around just for the fun of it and it’s even better when he has someone to run with.

After our fun time outside, we went into Mary’s Place to relax a little while.

Frank is house-trained and rated for children around eight and older. Since he is a bouncy, energetic boy, dog-savvy kids would be best. He can be picky about his dog friends, so would need to meet any dog he’ll be living with. He loves to go for walks, runs (need a running partner?), and hang out with his peeps when he’s tired. He is really hoping that his fourth family will be his last.

Here is his movie from 2017 when his name was Rocky. He’s very much the same dog now as he was then!

Nancy is an eleven-year-old Dachshund who is very shy at first meeting, but warms up quickly and LOVES people. Here she is with Megan. Nancy will need a feline-free home. 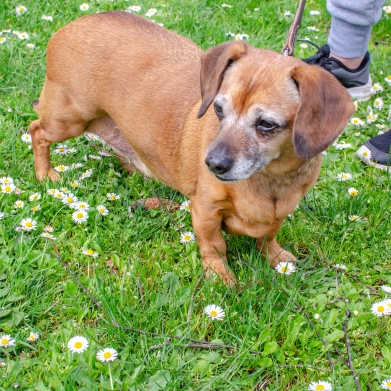 Chewbacca is a four-year-old Lhasa Apso/Terrier mix, and quite the little character. Here he is with Ayla who did a fantastic job grooming him. 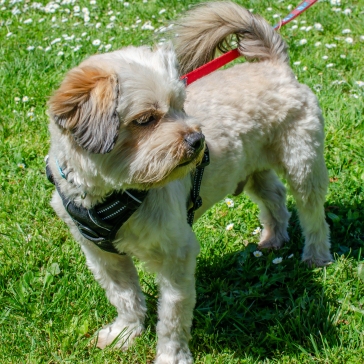 Zeppelin arrived at WHS last February as a stray with some skin allergies causing him to have lost a lot of his coat. He quickly became a favorite of volunteers because of his goofy, affectionate nature with people. However, he was not good with other dogs, so needed to be an only pet and we worried about how long it would take to find his perfect fit of a family. He loved hanging out with us in Mary’s Place.

One Sunday our Executive Director, BJ Andersen, stopped in and fell for him just as we had.

We were thrilled when finally in late March his perfect family found him and took him home. I got this update last week:

I’m the one that adopted Zeppelin in March and I’ve been meaning to write to you. He has adjusted beautifully to our family and each day we feel so thankful we found him. We actually went into the shelter that day for another dog that had been adopted a few hours prior. We immediately were drawn to Zeppelin and his sweet nature. He’s been so gentle and the biggest love bug I’ve ever come across.

Here are a few pics of him. And we did change his name to Gunnar. We’ve discovered he is well-trained (house-trained, sits, lies down). So he had a family at one point, even though we were told he was a stray. I’m always so curious about their back story.

Thank you for helping me make the decision to adopt him. He’s one of the best dogs I’ve ever had. 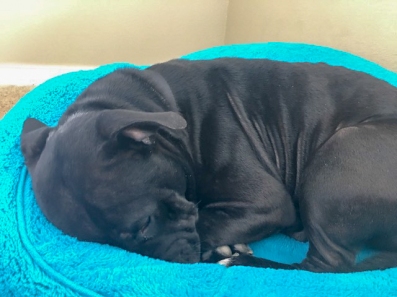 On that wonderful update, that’s it for this week!