This week’s post will feature only two dogs. My husband just had hip replacement surgery and I’m his “coach” (that really is a thing!) so my blog prep-time is less this week. But the two dogs I’m going to tell you about are very special.

Before I begin, however, I have two wonderful adoptions to announce from last week. First, I am very happy to report that our sweet Siri was adopted last week! She’s been waiting so long for her new family. Here is her going-home picture from staff and three that her family sent me that evening. I look forward to updates! She’s settling in just fine.

Also, our long-termer, wonderful girl, Zabrina was adopted! I was thrilled that I was at the shelter on Sunday when she went home with her new family. She has both human siblings and a canine sister! She was so happy!

I’ve been here since April 12th and I’m getting a little stressed. I hope my new family finds me soon.

I first wrote about Rocky on May 15th. He was extremely shy and felt more comfortable being very close to a person. Here he was with volunteer Diane. 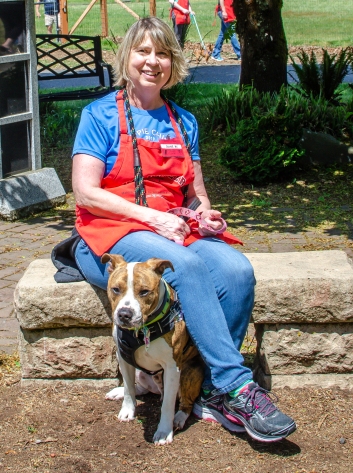 Rocky came to us because his family moved and couldn’t take him with them. He is a two-year-old mixed breed boy. Because of his timidity with new people and environments, he is one of our Behavior Team dogs, which gives him extra TLC and more time to work on building his courage. Rocky is both house- and crate-trained. His former family told us that once comfortable, Rocky is playful and outgoing and loves all people. He has done well in our playgroups, but can be picky about his dog friends. He loves car rides and adventures. Because of his initial shyness around new people and situations, he is recommended for families with older kids, fifteen and up. Rocky has good manners, is affectionate, and knows several commands. We can’t understand why he hasn’t been adopted yet. On Sunday we decided to spend some more quality time with Rocky. He was such a good, happy, loving boy. 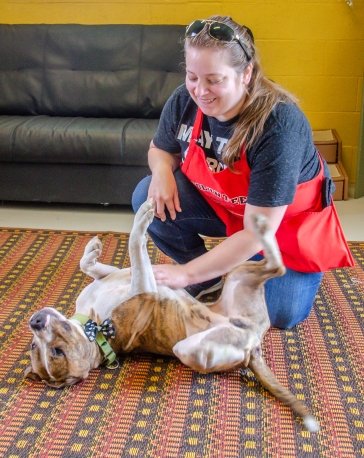 Linda and Rocky reviewed some skills. 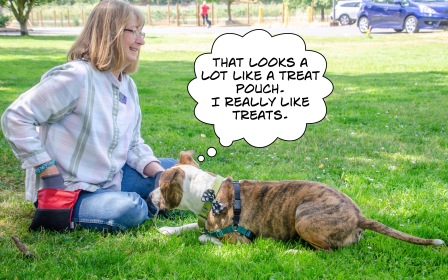 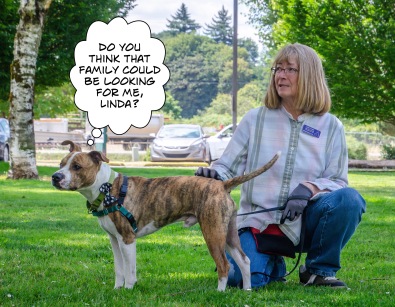 We decided he needed his own movie to show his playful, endearing side once he feels comfortable with people.

Finally it was time to go back to his kennel. 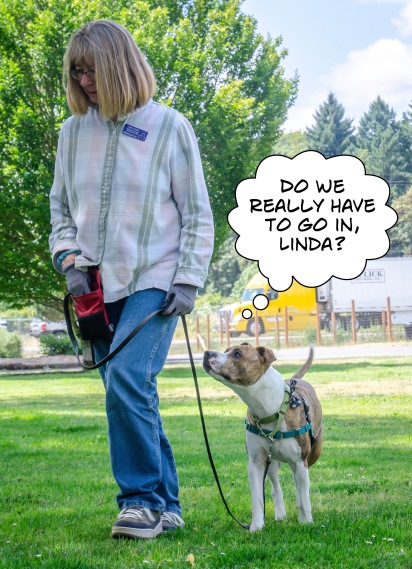 Rocky is going to be one of the best active family dogs EVER! If you are interested in Rocky, please submit your adoption questionnaire and allow our Training Team to contact you for an appointment to meet him. You can fill out an application by clicking here.

I may be a senior, but take the time to meet me and I bet you’ll really like me!

Brutus is going to be such a great family dog! He is an eight-year-old senior who would like his new family to help him lose some weight, as he is currently 92 pounds. Losing those pesky extra pounds will really help the arthritis in his back end.

Brutus is a fun, eager boy. Here he is on his Sunday afternoon walk with Haylee.

Brutus was surrendered because his family was moving. They report that Brutus is mostly an indoor dog and has lived happily with a cat (yes, a cat!). He can be left alone in the house and does fine. He loves attention and while initially excited in new environments, settles down quickly. He can be a bit picky about his canine friends and isn’t a big player, probably due to some arthritis pain (did I mention he needs to lose weight?). He is rated for children about ten and older.

We decided to see if Brutus would enjoy Blanket Time. He definitely did. He loved just hanging out with his fan club (Caroline, Linda, Ayla, Megan, and Marianne) on a lovely Sunday afternoon.

He liked posing for my pictures. 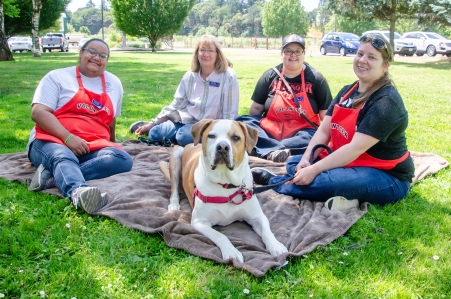 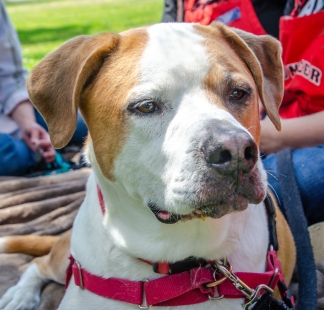 He especially enjoyed the jokes that were shared.

He thought his jokes were hilarious. 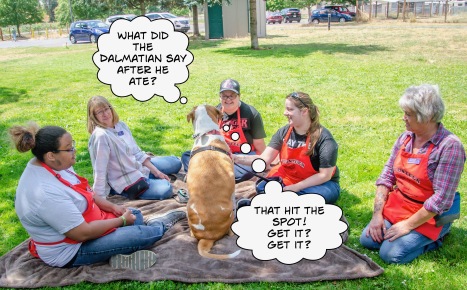 Then it was quiet time 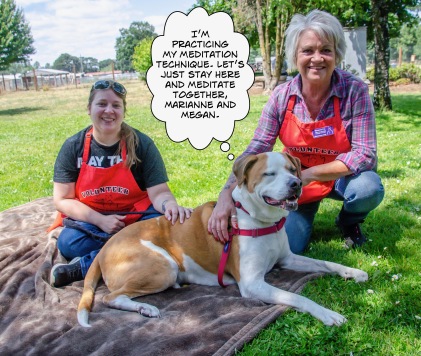 A little later, we went into Mary’s Place. Brutus was excited to show us that he could roll over on command. We had our doubts until — 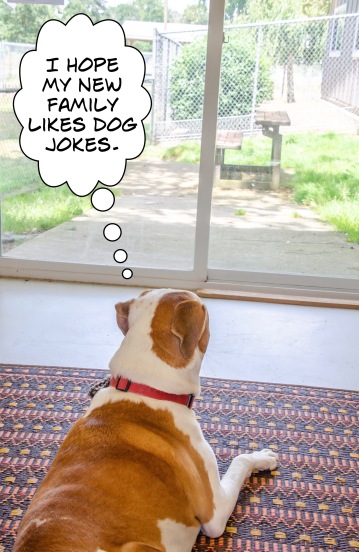 Brutus is a fun, eager, and gentle dog who loves spending time with people. We know he’ll make a terrific companion for some lucky family.

Remember last week, Fetty and Pam got to go with Linda and Jolene to Linda’s house? 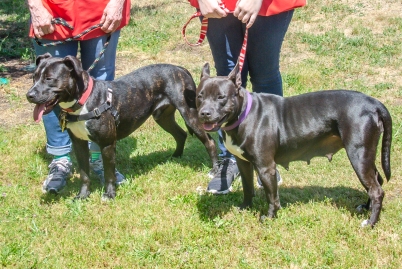 Here is another video showing what a blast they had!

I’ve written many posts about Pam and Fetty, two of our shy dogs. Pam is from Maui and Fetty from Alabama, and have become BFFs. They asked to share a double kennel, so they do and love it. In fact, because they are best friends, the shelter has decided to offer a special package if a family can adopt both of them together! They don’t have to be adopted together, but what fun it would be! To learn more about these two special dogs, see my post, click here. 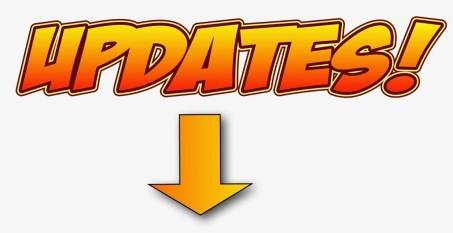 Senior Spud was brought to WHS in early February. He immediately won everyone’s heart who met him. Here is what I wrote about him in my March 13th post:

Spud came with skin issues which had resulted in losing most of his coat. But with meds and vet care, Spud thrived, his coat growing back quickly (though his tail is still a bit bare). Spud is just about the perfect medium-sized dog. A ten-year-old Lab mix, he’s a senior and showing some signs of age, but that has not dampened his sweet personality. His big brown eyes will melt your heart.

We were over the moon when Spud was adopted. And this week I got this wonderful update.

“I shared this update with WHS staff; Marianne encouraged me to send it to you, too — which seems only right since I first heard about my dog through your weekly post.

I adopted “Spud” a few months ago.  He was a surrender, arriving at WHS with a skin condition that caused discomfort and hair loss. After a few weeks of healing, he became available for adoption.

His new name is “NOLA” (as in New Orleans, LA) and just like that great city, he’s come back from a crisis and is doing better than ever!

My vet says he’s very healthy for his age and on track for regaining weight. His coat becomes more beautiful and shiny every week. He’s exceptionally smart, very mellow, eager to please, and a terrific companion. We’re taking the WHS “Rescued U” class where NOLA’s proving that old dogs CAN learn new tricks!

I am so grateful to the family who surrendered him and to WHS for taking him in and bringing him back to health.  I’m so fortunate to have him and am glad you can use the update.  I hope it encourages others to consider a senior dog like Nola.” 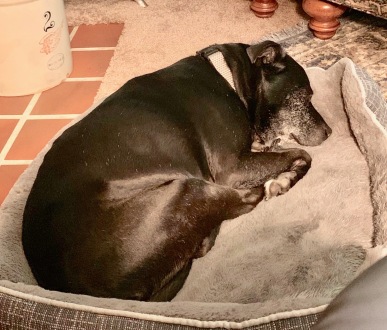 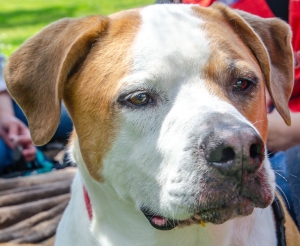