What do a seven-pound Mexican Hairless Dog, a ninety-pound German Shepherd, and an eighty-three pound American Staffordshire Terrier jokester have in common? You guessed it! They are all being featured in this week’s post. I can’t remember a time when I have talked about three such different types of dogs, but they are all waiting for their new families and we hope that wait will soon be over for them.

But—before we talk about dogs waiting to be adopted, I want to show you pictures of two who went home on Sunday. I was so happy that I was at the shelter to take their going-home pictures!

First was Rufus who has his own girl as his new best friend. She had seen him on the website and decided he would be her perfect fit of a dog. 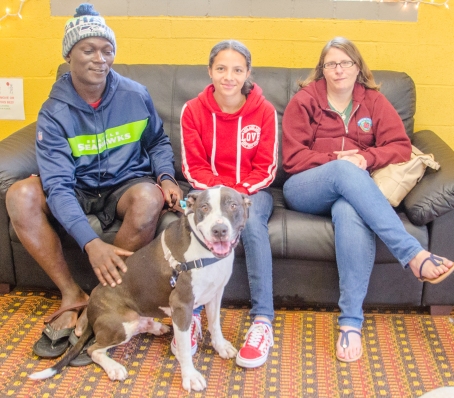 Zeus also went home on Sunday. His peeps were over the moon with excitement as they left the shelter. 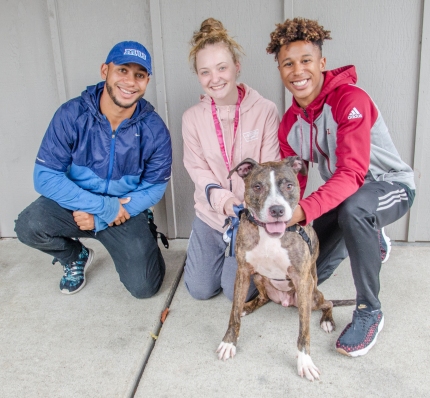 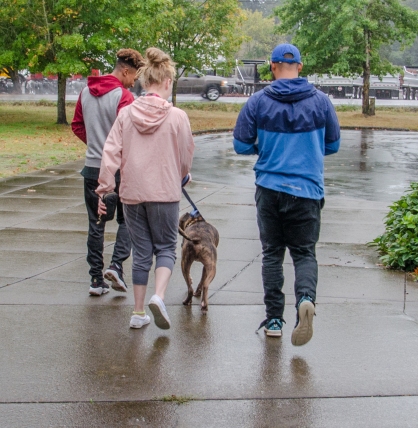 Tired of vacuuming up dog hair all over your house? Well do I have the answer for YOU!

I had never met a Mexican Hairless Dog mix before last week when I met Peach. She is a shy girl at first meeting, but she does warm up given a little time. 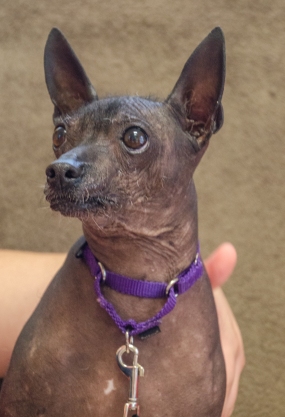 Peach is seven years old and has been with one family her whole life, but they are moving and unable to take her with them. Full disclosure, Peach is not TOTALLY hairless. She has a few short hairs on the top of her head, around her nose, on her toes, and on the tip of her tail. Her former family reports that she is a cuddly lapdog once she feels comfortable with new people. She can be a bit “yappy” and you’ll need to watch your snacks, as she will steal food when you’re not looking! She has lived with a cat and done fine. She also gets along with other dogs and sometimes plays, but not always. She is nervous around boisterous children, so is listed for kids about 13 and older. She is crate-trained and does fine when left alone. She will need a little help with house-training. On Sunday we took Peach into Mary’s Place. When Caroline arrived, she was a little taken aback by Peach’s unusual appearance.

After a little while of getting to know us, Peach started to enjoy being held and we all took turns. But I couldn’t get her to smile. Here she is with Megan, Marianne, Ayla and me. 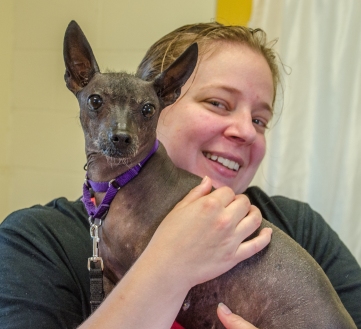 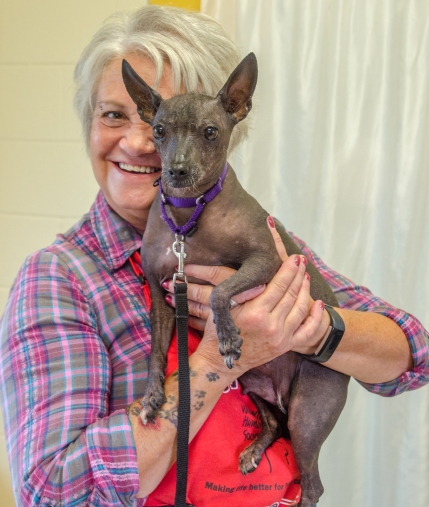 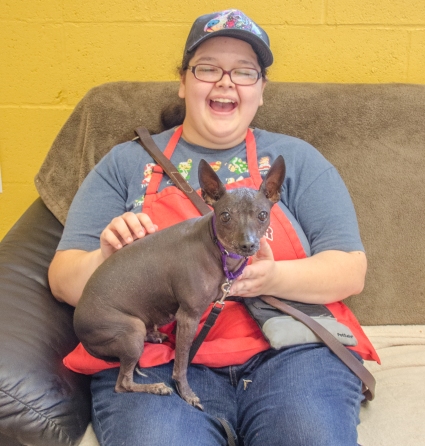 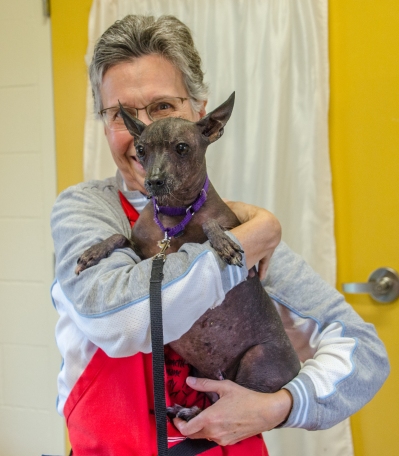 Hairless dogs have many fans and we don’t think our sweet Peach will be at the shelter for long.

I may be a big boy, but I’m very good-natured and I love kids!

This is Titan, one of the calmest Shepherds I’ve ever met. 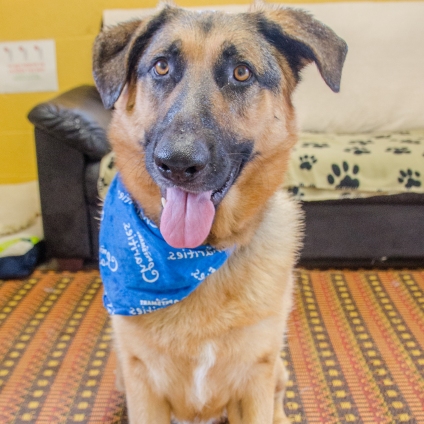 Titan is a four-year-old German Shepherd mix. At 90 pounds, he is a very big boy, but oh, what a gentle soul. He has a great history with kids and so is rated for children as young as five. He knows several commands including sit, down, and shake. Haylee brought him into Mary’s Place after his walk on Sunday afternoon. She did not know he liked to hold hands.

Titan was surrendered when his family moved and didn’t have room for him. They report he loves people and likes to please them. He cannot live with cats, however, as they are too easy to chase. He has lived with other dogs, but can also be reactive to some, so would need to meet any he’d be living with. He walks well on leash, is house-trained and crate-trained. He is fine when left alone, however, he is afraid of thunder and fireworks. In Mary’s Place, he was calm and enjoyed just hanging out with us. In fact, he became totally relaxed on the couch! And yes, he took up most of it! 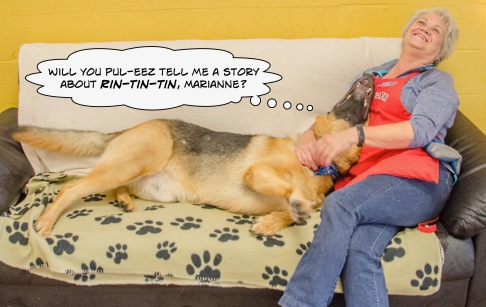 Side note: If you are under the age of, say, 60, and have never heard of Rin-Tin-Tin and wonder why Titan is such a fan, here’s the scoop: “Rin-Tin-Tin; (September 1918 – August 10, 1932) was a male German Shepherd that was an international star in motion pictures. He was rescued from a World War I battlefield by an American soldier, Lee Duncan, who trained him and obtained silent film work for the dog. Rin-Tin-Tin was an immediate box-office success and went on to appear in 27 Hollywood films, gaining worldwide fame.” (https://en.wikipedia.org/wiki/Rin_Tin_Tin)

Later, “The Adventures of Rin-Tin-Tin” was a very popular 1950s TV series.

Besides loving to hear stories about dogs, Titan enjoys posing for pictures with his peeps. 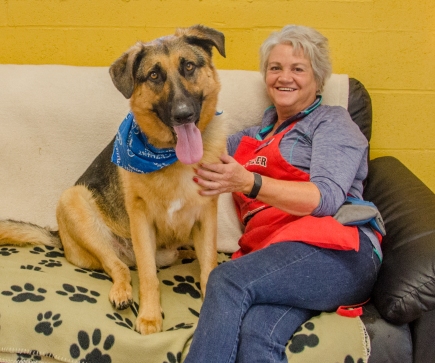 Titan will make a wonderful addition to an active family with a yard for him to run in, a couch for him to lie on, and children for him to love. This is a very special boy.

I may look a little lop-sided in my face, but I’m just fine! Got treats?

Thor is a delightful six-year-old American Staffordshire Terrier mix with some paralysis on the right side of his face. We have no idea what caused it, but it doesn’t bother him at all. However, it makes his right eye look smaller than his left and he has a little trouble holding onto a treat on the right side of his mouth. That also doesn’t bother him a bit as long as he gets the treat! Marianne says his face matches his goofy personality.

Goofy is right! Thor is a ham and he loves everybody. His former owner reports that he is easy-going, laid-back, and affectionate. He likes to play with chew toys. He is both house- and crate-trained. Because he can be a tad over-enthusiastic at times, he is rated for kids about 13 and older. We had such a blast with him on Sunday. He kept us laughing.

Thor has lived with cats and other dogs happily. He is fearful of loud noises and fireworks and as a result can become jumpy, so his adoption includes a FREE Dog Smart class, a FREE 30- minute private lesson and 50% off of a 90-minute behavior consultation. Thor will need to have a small mass and a skin tag removed on his chest before he goes home with a new family. He also has some arthritis in his back legs and is on some pain medication. But all of these things don’t matter to our funny boy. In his eyes, the treat box is always half full! 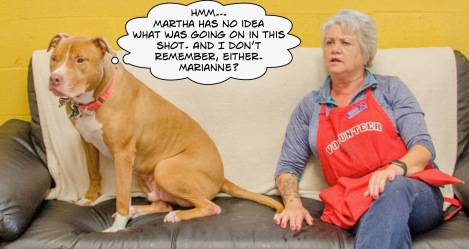 Volunteer Diane stopped into Mary’s Place to say hello and Thor was thrilled. 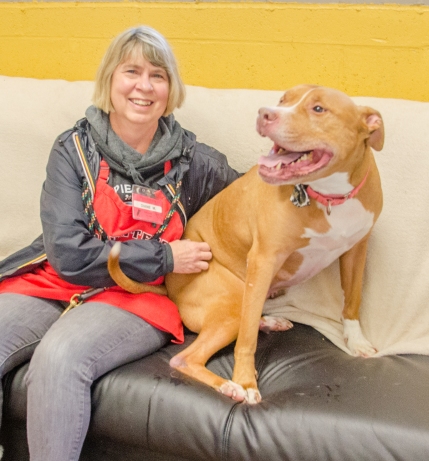 As you have guessed, Thor has quickly become a shelter dog favorite. We hope his forever family will find him soon. He will be such a fun, happy family member!

It’s no surprise who is the subject of this week’s outtakes!

Remember Molly, our sweet girl who moved to Portland with her new peeps and became an office dog?

Her people have been wonderful about keeping in touch and I’m thrilled to report that Molly is doing great and couldn’t be happier! She loves her moose toy that her human aunt got her in Canada. She also loves romping in the courtyard of her apartment complex.