It’s been quite a week. Our Willamette Valley was hit on Friday with an historic ice storm that left thousands without power and did tremendous damage to the area’s trees. The cleanup has been ongoing, but there is still much to be done. Thankfully, WHS never lost power, but their internet and phone systems are still down. Here’s a picture volunteer Marianne took of the ever-growing branch pile at the shelter.

While all the animals at WHS have been taken care of and are warm, due to the storm, all adoption meets had to be canceled.  As a result, I have no adoptions to report this week.

Yes, I know I need to lose a little weight…ok, well, a lot, but I’ve won the hearts of everyone at the shelter! Maybe I’ll win YOURS!

Isabelle, a six-year-old Lab mix, was surrendered in January because her family couldn’t take care of her anymore. When she arrived, she had some ear and skin issues, but with a high-quality diet, ear drops, and antibiotics, her skin and ears have healed well. 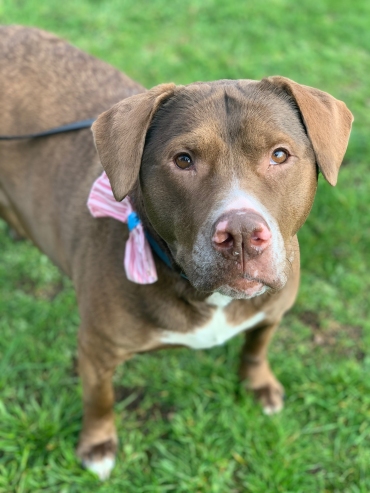 Isabelle doesn’t like to discuss it, but her biggest health challenge now is her weight. Isabelle is short as Labs go, and at 101 pounds, she is considered obese. If you need a motivation to get out and walk, Isabelle could be your new best friend. With her high-quality food, fewer treats, and exercise, Isabelle will slim down and become a healthy, active girl.

As soon as Isabelle arrived at the shelter, she became a favorite of both staff and volunteers. Her affectionate, easy-going personality was evident right from the start when Intake Staff wrote, “Isabelle was very tolerant of handling, did not even notice getting vaccinated or microchipped. She LOVES treats and is very easy-going. She pulled a little on the leash but listens well when food is involved.” Ah, yes, she loves treats, which were cut way back once she was settled in. Volunteers Marianne and Nancy enjoy taking Isabelle into Mary’s Place for some play time and cuddles.

Isabelle has done well in our shelter playgroups. She is more of a “mingler” than runner, no doubt due to her extra weight. She does not like to be around the rowdy dogs, preferring gentle ones. She can be picky about taking medication, as staff discovered when trying to get her to take her antibiotic. “She knows when it’s pill time and really hates them! I tried the pill pockets (all flavors and types), and she just spits out the pills. I tried giving her a small amount of food with the pills crushed and mixed in, and she wouldn’t eat it! Just smelled it and turned up her nose. Today I tried some tuna to see if it was stinky enough, and it was! She ate the crushed up pills in a flash since she couldn’t smell them!” (Note to her future family—tuna!)

Isabelle’s family had only good things to say about her, having had her since she was a puppy. She was loose in the house and never caused any damage when left alone. She can be touched anywhere on her body except her nails, which she is sensitive about. She is happy to see strangers, though can be a bit shy at first. She rides fine in the car. She has happily lived with a cat and has gotten along well with children.

Since coming to the shelter, Isabelle has made many human friends. She loves going out to the play yard and hanging out with the staff and volunteers. 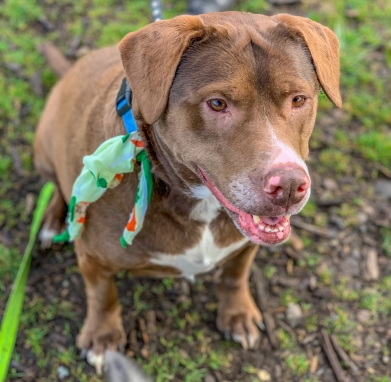 Marianne is one of Isabelle’s biggest fans. She writes, “Isabelle is the sweetest dog. I’ve taken to calling her Izzy for short. She is very loving, and I can picture her being a couch potato some of the time. She loves people and loves to cuddle. She has some energy though, and I can imagine her getting down to her ideal weight and being fairly active. She is a strong girl and can pull on leash when she wants to. I think she would make a great family dog and would be wonderful to take camping and hiking.”

If you are looking for a reason to get out and walk and want a devoted companion to help motivate you, perhaps Isabelle is the perfect addition to your life. Fill out the Adoption Questionnaire by clicking on Isabelle’s picture and then on the link Apply to Adopt found on this page: https://whs4pets.org/dogs/

We have THREE terrific updates this week!

Jewel came to WHS via an overcrowded California shelter in August of 2017. Here’s what I wrote about her in my September 6, 2017 post:

“Jewel is just that, a jewel of a dog. A Chihuahua mix, she was transferred to us from a California shelter and is full of energy and fun. At two years old, she still acts much like a puppy. She has a little cold at the moment, so is spending some time in our ISO kennels, but that hasn’t stopped her from playing her version of fetch, which is to dash madly after the tennis ball, then veer off after a bug. This little dog keeps us laughing.”

On September 16th, Jewel found her forever home. Last week I got this sweet update:

“Hi Martha. We adopted Jewel back in 2017 and thought you might enjoy seeing how she’s doing. Thanks for all you do for animals.” 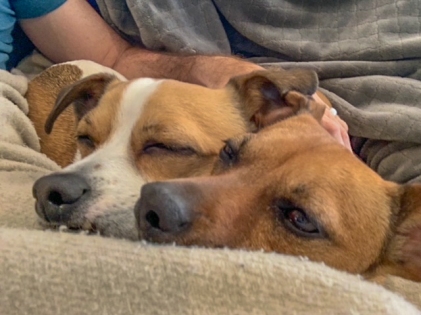 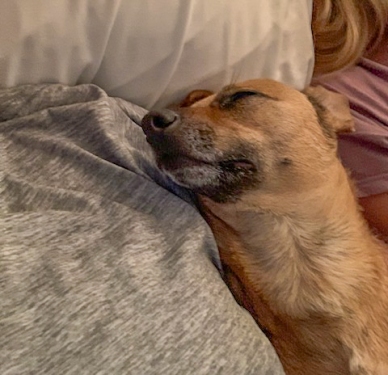 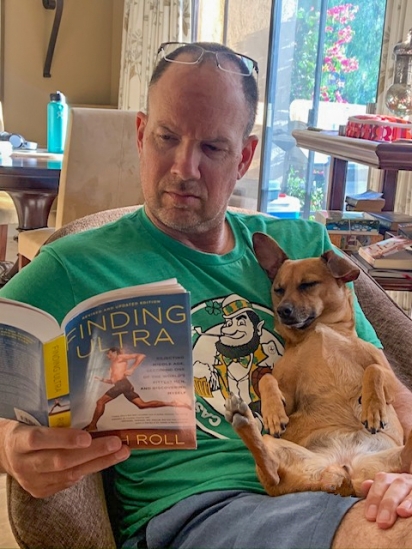 February 10, 2020, they came back to the shelter and adopted Wilbur, who became Winston. 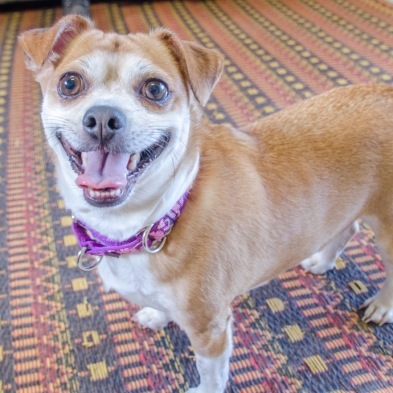 Pam has been a devoted reader of my blog posts and has been so kind about keeping me updated about the boys. Last week she sent this update.

“Tomorrow we will have had Winston for one year. It is hard to believe it has been a year. He has brought us so much joy and love. He has quite the personality. He is a smart little guy. He loves to go. This picture was taken at Minto Brown Park, this afternoon. We just love him so much. He is so good to our little Pugsly. He takes good care of him.” 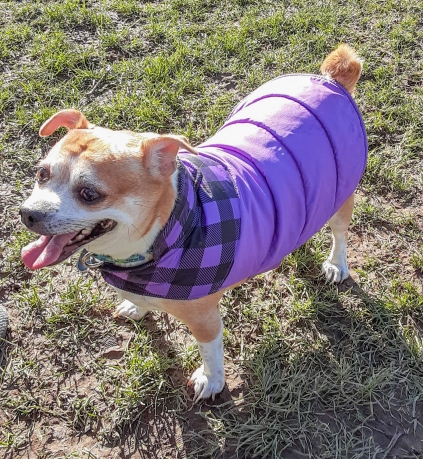 “This is a picture of Pugsly waiting patiently while we get the other pups loaded in the car. We went to Willamette Mission Park yesterday. Hope all is going well at the shelter. I know with this Covid it has been hard on all of you. But as I read the newsletter it seems you are still doing a great job of adopting.”

Toby was one of our longest “long-termers” at the shelter. He was surrendered on July 14, 2019. He was adopted once, but returned when it was not the right fit. Toby was not the right dog for everyone. I wrote about him in my blog posts many times, but still he waited.

“I’ve written about Toby many times, but still he waits for just the right family fit. In his former home, he spent most of his time outside but really wants to spend more time inside with his family. Toby is a sensitive dog and he’s hoping that understanding and patient people will adopt him. In his ideal home, Toby would love to have someone there most of the time, as he can be anxious when left alone. Toby is an active dog who would love to go on hikes or jogs with his person. He’s the kind of boy who can be energetic and eager, but then settle down and lounge on a blanket. Toby is not the dog for everyone, but he will be a great pal to someone with patience and time who will help him gain more confidence and will enjoy a rather large, affectionate lap dog. Toby has been waiting a long time.”

Marianne, Caroline, Megan and I all loved Toby and worried about who would adopt him. 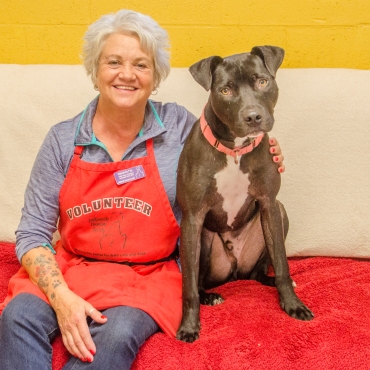 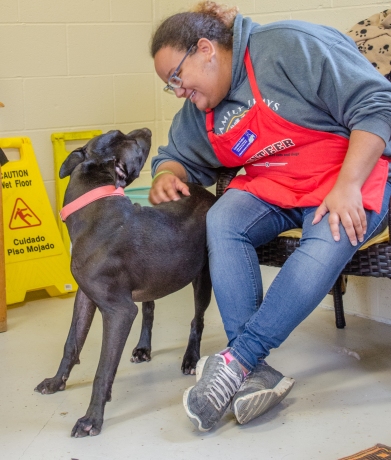 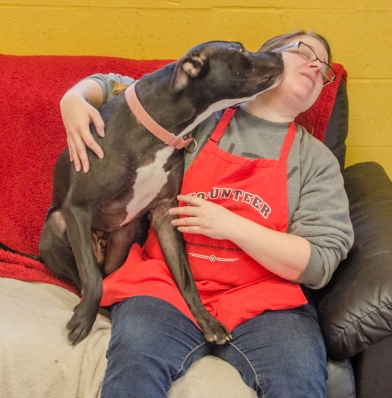 The weeks, then months passed and still Toby waited. Then on a cold Sunday, February 9th, 2020, a young couple came in to meet him. It was love at first tail wag. After over six months of shelter life, Toby went home!

Mike and Jeannette were great about sending me several updates in the first weeks of Toby settling in with them. Last week I was thrilled to get another one from them. Toby was so lucky to find his perfect family.

I’m not sure if you’ll remember us, or if you’re still doing the blog for the Humane Society, but I thought I’d give you a little update on Toby.

It’s been a year since we took him home and he’s really come out of his shell. He certainly doesn’t shy away from letting us know what’s on his mind. He’s gotten used to his routine and holds us accountable to it 😂 He loves that we’ve been working from home and have more time for playing and cuddles. We go on mini road trips a few times a month and they are his favorite. We played in the snow for the first time, but he was not a fan. He’s made a ton of progress with being more social. He’s still scared of most dogs but he actually made one dog friend! I hope this finds you well, warm wishes to you and everyone at Willamette Humane Society.”

This picture made me laugh. Nope, Toby is not a fan of snow!

With those happy updates, that’s it for this week!

Other terrific dogs waiting to be adopted can be found at Willamette Humane Society. Here is the link to the adoptable-dog page: https://whs4pets.org/dogs/