It’s been a busy week at WHS. We’ve gotten new START dogs, we’ve had some great adoptions, and preparations are in full swing for our annual Bowser’s Boo Bash on October 27, our biggest fundraiser of the year. Tickets are still available, go to the WHS website for details (www.willamettehumane.org).

There were several great adoptions this week including the following Blog Dogs. 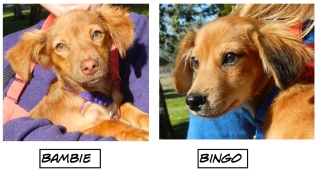 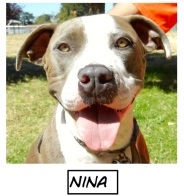 I was especially happy about Nina’s adoption. She’d been at the shelter since September 2. She is one of our START dogs who has finally found her Oregon home!

Play group was fun, as usual. Nina seemed to sense her new family was coming, and was in an especially good mood.

Gia is hoping her turn will be next!

It’s always funny to watch the action of a new arrival to play group.

Cowboy and Joker really hit it off and played together a great deal of the time.

Lucy didn’t have much luck getting the attention she wanted.

But she didn’t let it bother her.

Remember Sam from last week’s post? He had a great time in play group and spent some happy petting time with Sarah.

What a great face! 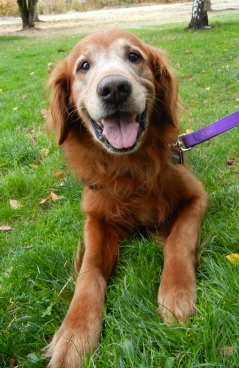 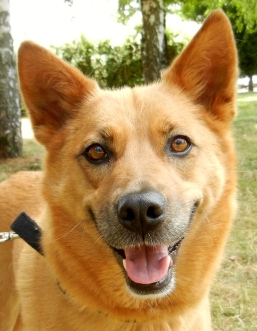 I want to start this week telling you a story about a special dog named Cinnamon. She came to us in July from an overcrowded high-kill shelter in California, rescued by the START team and brought to WHS to find a forever home in Oregon. We don’t know her story, but for whatever reasons in her past, she has some issues that have resulted in her being returned to the shelter after being adopted several times. We need to find her an experienced, understanding, and patient adopter who will give her the security, love, structure, and time she needs to calm her fears and finally make her feel safe. Cinnamon doesn’t like to share “her people” with other dogs, and she is fearful of a number of things. She is very shy and nervous in the shelter environment. Thankfully, volunteer Beth has taken Cinnamon home as a temporary foster and has begun to see what this sweet girl is actually like when she is less stressed, and how with a little patience and time, she can begin to improve her behavior. Here is her report:

“Cinnamon would have preferred that I didn’t have two dogs at home to compete for my affections. She wanted me all to herself. I introduced her slowly to my shepherd-mixed dogs and she acted politely with them and started following them around the yard discovering things. She has been caught napping with them a few times a day and seems relaxed around them until one of them wants my attention. Then she gets snippy with them and tries to wedge herself in between us. She gets corrected and responds to that quickly, however, she still persists in wanting to be nearest to me. It takes Cinnamon a while to warm up to new surroundings, but once she does, she shows you just how grateful she is to be with you by leaning on you and softly nudging you to make eye contact. She looks you directly in the eye, extends her left paw gently and once you take it, she will sit there contentedly holding hands indefinitely. There is no doubt she wants to make a connection with you if you will just let her. It’s been a very nice surprise to see such a relaxed side to her after spending time with her in the shelter where she is so timid. This is the real Cinnamon, a dog who wants to bond and sit quietly with her person.”

I stopped at Beth’s house today to say hi to her, Cinnamon, and her dogs, Jackpot and Reno. Here are the results. 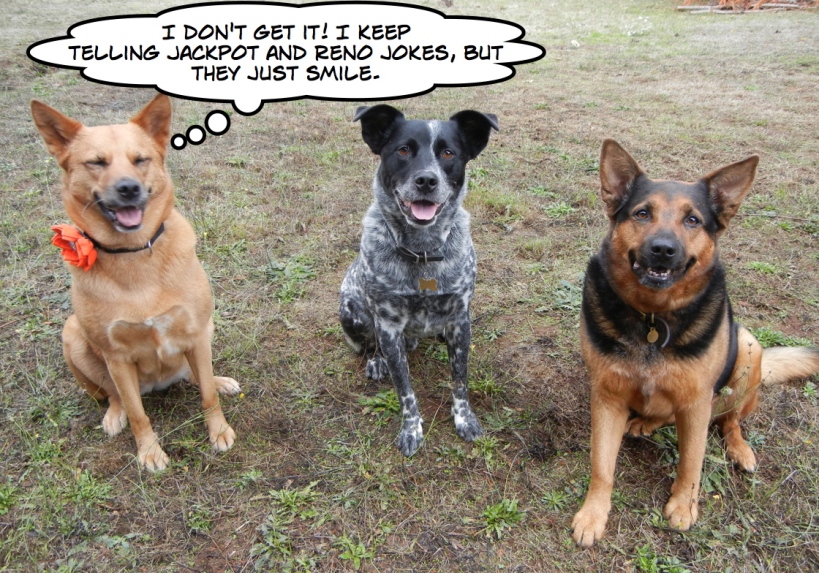 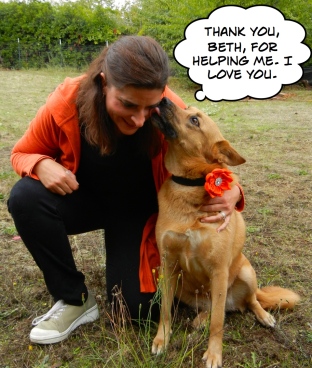 Beth can’t say enough good things about Cinnamon. Today she told me about her excellent recall. Whatever she is doing outside, even running with the other dogs, when Beth calls her name, she stops and instantly runs to her. She also goes into her kennel each night without complaint, and is such an affectionate, polite dog. Her only issue is she wants a person of her own, so would do best as an only dog. Beth has taken her everywhere and Cinnamon has done great in all situations. She is such a wonderful girl. There has to be a loving home just right for this sweet dog.

We may be in the ISO kennels, but we’re still available for adoption!

On Sunday I caught up with taking pictures of some new arrivals for the WHS website including those who have caught colds and so are in the isolation kennels as a precaution to keep germs from spreading. Dogs in ISO are easily overlooked by potential adopters, but are still available. They can be adopted either after they finish their meds or during, if the new family wants to take them home while they recover from their cold. Little Hope is a ten-month-old Chihuahua mix with huge ears! Here she is with volunteer Gerri. Hope is a sweetheart even though she’s a little under the weather.

And here is Kelly Osbourne, a two-year-old Miniature Poodle/Terrier mix. Both Kelly and Hope are START dogs, wishing for a new beginning in Oregon. They each would like a quiet home with older kids or adults.

Will you adopt me and my blanket?

One of the Sunday afternoon walkers is Mayra, and I happened to see her walking this little guy named Jack. I called them over for pictures and instantly fell for this shy and quiet two-year-old Terrier mix. Jack is another START dog from Los Angeles. We don’t know anything about his past, but he has a blanket that is very important to him and is to go home with him when he’s adopted into his new Oregon family. Something about his gentle nature grabbed me. I hope he gets his new loving home very quickly. Here he was trotting toward me when I called him over for photos.

Here he is with Mayra.

And here is the look that grabbed my heart.

Today we discovered that Jack does not like the rain. New volunteer Chelsea spent some time with him in a yard, but Jack preferred to be carried back to his kennel. He’ll be getting used to rain, now that he’s an Oregon dog! 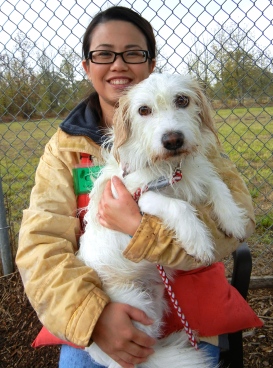 Look at my face…can you resist?

Meet Gordy, a two-year-old purebred Rottweiler. Another START dog, Gordy is very well behaved, takes treats nicely, and walks well on leash. He is such a handsome guy! 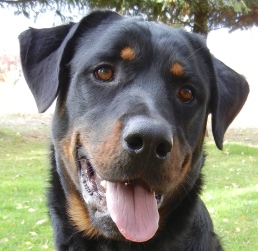 And here Gordy was on Sunday with volunteer Luke. They quickly became buds.

Two Ball Dogs looking for new families!
After play group and pictures on Sunday, I found myself between walking shifts which meant I had my pick of dogs and yards. I wanted to spend some quality time with my two favorite Ball Dogs, Tido and Lucy. I first took Tido out and tried to tire this seven-year-old boy out. As he thumped his tail waiting for me to throw the tennis ball the umpteenth time, I knew I would tire long before this guy. Tido has been waiting for a new family for a long time, both at WHS and before that at another Oregon shelter. Each week I hope to find him happily gone from the shelter. But each week he enthusiastically greets me at his kennel door with a “Let’s go!” look. Maybe this week will be his week! 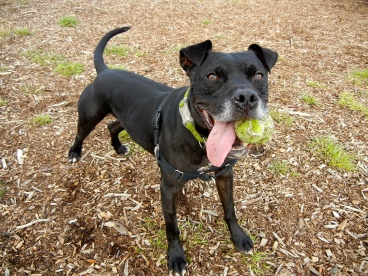 Then it was Lucy‘s turn. This girl has such amazing manners when playing ball! She races after it, brings it back in a rush, drops it at your feet, then gives you a play bow and a grin and eagerly waits for you to pick it up and throw it again, eyes shining with anticipation.

Here are a few shots of Lucy in action. She is a three-year-old Rhodesian Ridgeback mix. 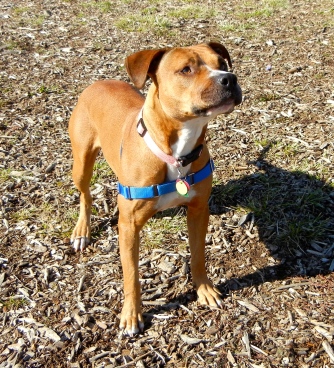 After a few games, Lucy will take a quick dip in the pool. 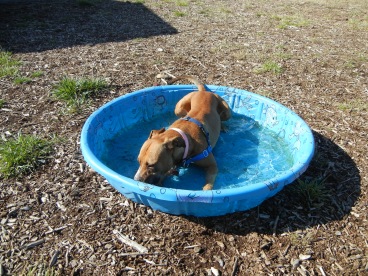 Today when I arrived at WHS, I was delighted to meet four new Wednesday afternoon walkers who are joining our team! You will be seeing some new faces in my photos (you already met Chelsea)!

The name’s Presley, I’m a cross between a Papillon and a Pomeranian. Can you tell?

New volunteer Bethany took Presley out and I asked to snap this picture of the pair. Presley looks like a baby bear to me. He is a year old and quite polite and calm. He takes treats nicely and walks well on leash. I love the one ear up/one down look!

I wasn’t surprised to see Kathy out again with Presley after all the dogs had been walked. He’s such a cute little guy! And he likes to be held.

I’m getting a little anxious here at the shelter. I hope my new family will find me soon!

Gia is a favorite of both Marla and mine, and I was anxious to take their picture under cover from the rain. Gia has been at the shelter so long (since early September) that she is getting stressed. She is a two-year-old Pit Bull Terrier mix. Today she seemed sad and nervous, so Marla took her out twice. We’re hoping that she is adopted soon into a real home where she can finally relax in peaceful surroundings.

I’m new here, but so is Larry, so I feel better!

New volunteer Larry brought new arrival Nelly out for pictures for the WHS website, so I shot this one of them together. Nelly is a six-year-old Chihuahua mix, another START dog who is looking for her new Oregon family. She is very polite and playful. She walks well on leash and liked my hot dog bits, taking them nicely. She’ll be a great family addition. 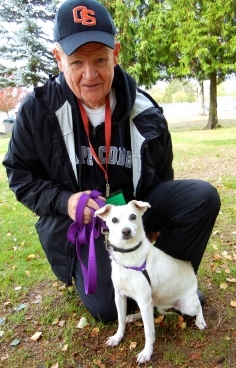 This little guy is looking very spiffy since his bath and haircut after arriving at the shelter. His name is Rocky and he is two years old. He’s a Shih Tzu mix. He enjoyed spending some time outside between showers with Sarah. Rocky is a little nervous around new people, so would do best in a quiet home with adults and older children. He is a sweet little guy who is waiting for a new family to love him.

It was great getting to meet our new walkers today and I’m hoping to be able to report lots of happy adoptions next week!