Happy Early St. Patrick’s Day! While it’s not the exact day yet, and both the dogs and volunteers sighed when they saw I had a bag of props for them, they all put up with my plans and you’ll see the results later in this post.

There were lots of adoptions this past week and many of them were Blog Dogs. Best of all, both of our bonded pairs went home together! 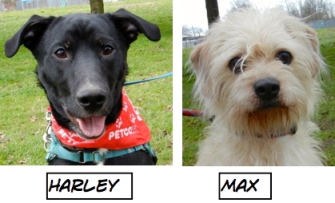 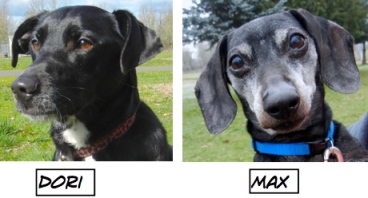 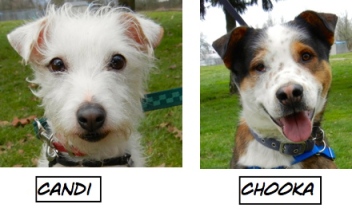 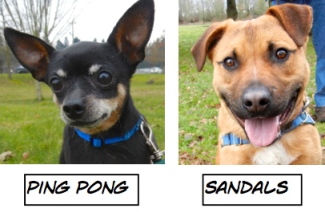 Play group was another active one with both yards abuzz with racing games and tag. Here are some of the things I overheard during the morning.

This was Chooka’s first play group and he didn’t know all of the rules yet.

But he caught on quickly and was adopted the next day!

Another newbie and an absolute delight is Banjo. He was in the Little Dog yard and wondered what it would be like with the Big Dogs.

Kingston is back from being in a foster home and he was thrilled to be in play group again. Just when I was about to snap his photo, staff member Kim’s little Favorite decided she wanted to get in the picture, too! 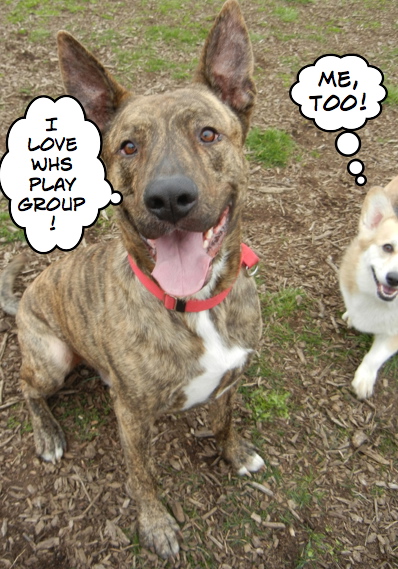 At the end of play group, I got this shot of Kingston going back to his kennel. He was still very happy.  Kingston is a one-year-old Shepherd mix whose foster family said gets along great with kids, cats, and other dogs. He’s going to make a fantastic family addition!

After play group, I took out my props bag and as volunteers brought out dogs to walk, I lay in wait.

I decided to put this shot in, even though Chooka was adopted on Monday. He has a great story. After sitting in a kennel at another shelter for a long time with no one adopting him, he arrived at WHS on Saturday. Maybe it was the Luck o’ the Irish! Gabby was a great sport when I pulled out the green glasses!

Banjo is one of the most delightful dogs I have ever met at the shelter. He is a nine-year-old Beagle mix who is calm, well-behaved, affectionate and pretty much a perfect dog. He got along with others in play group, put up with my attire (though he was thoroughly disgusted), and took my treats politely. What a great friend he will make some lucky family! 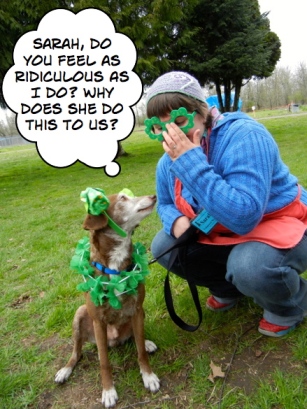 Here he was in play group. He loves being in your lap.

He really wanted me to put in a regular shot of him, so you could see what a normal dog he is. I love this boy!

Good grief. I arrive here on Saturday and this is what she does to me!

Along with Chooka, this terrific girl named Petzi arrived from the same shelter. She, too, had been overlooked by potential adopters, so came to us to try to find her new family. Petzi is a four-year-old Pit Bull Terrier mix who is polite, knows some commands, and is an energetic young lady. She and volunteer Wendi both cooperated with me without complaint. Petzi is hoping that like her friend, Chooka, she will get adopted quickly.

No, I’m not going to smile wearing this!

As you have no doubt realized, not all of the dogs were thrilled with dressing up. This is yet another new arrival, Moby, a seven-month-old Australian Cattle Dog mix. Volunteer Tayanita made a point of coming to meet Moby on Sunday. They have a very important connection; they are both deaf. You may remember Tayanita adopted Hope, another deaf dog, a couple of months ago (I had an update last week). On Monday Hope and Moby had a play date and loved each other. Tayanita has started teaching Moby some hand signals. I may have more news about Tayanita and Moby next week. 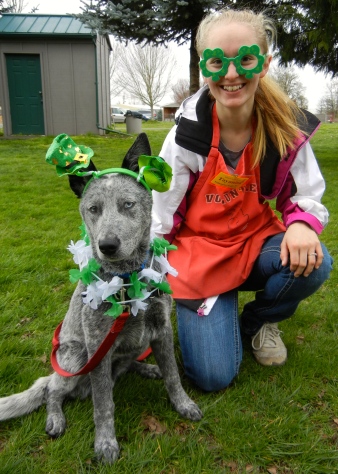 I may have an unusual name, but I’ll be a great companion!

Her name is Coloring Book and she is a one-year-old Terrier mix. I decided to start calling her CB for short. She is a sweet dog, a little nervous when there is a lot of noise and activity, so a quiet home with adults would be perfect for her. She loved the hot dog bits I offered her. She played in the Little Dog yard during play group and seemed to enjoy it. She takes some time to warm up, but once she knows you, she loves to be with you. She decided Sarah was going to be a good friend. 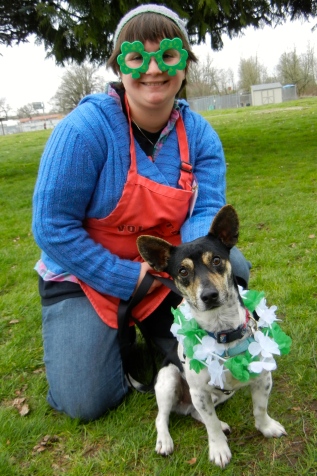 Sarah’s Most Favorite Dog Ever is still waiting…

You’ll remember last week that Sarah announced that Cassidy is her all-time favorite shelter dog. That was saying quite a bit, since Sarah has loved many, many shelter dogs. So naturally, once we got all of the new dogs’ pictures taken, we took Cassidy out to the big yard for some special time. Here is a series of pictures that speak for themselves. Cassidy is a seven-year-old Pit Bull Terrier mix who loves people and playing fetch. (Although if she thinks you have treats, she’d rather hang out with you than chase a ball, I found out.) She is affectionate, smart, and calm. She is a START dog, transported here from California. She is hoping that soon she will have a family. She has been at WHS since December. 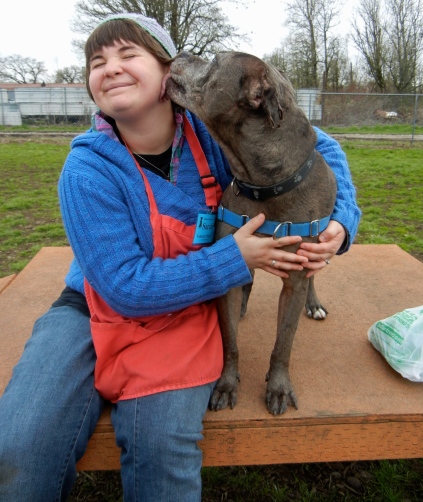 That brings me to today. It was the first really springlike day we’ve had here in Salem and both dogs and volunteers were happy about it. And just like Sunday, the volunteers and dogs were good sports about my St. Patrick’s Day props.

I’m an enthusiastic and eager boy looking for an adopter like me!

This is Davy, a Lab/Rhodesian Ridgeback mix. At one year old, he is still a youngster and a big one at that! Davy is a very good-natured and happy boy, but has had little training. He would love to come to WHS classes and learn to have more impulse control and how to “settle.” He will make a wonderful jogging or running partner. He’d like to have a big back yard to romp in. He does know how to sit and took my hot dog treats nicely. Here he is with Bethany. Since he came in as a stray, we don’t know about his past.

This picture shows how handsome this big boy is!

I’m starting to relax here at the shelter.

Today Larry spent quite a bit of time with Petzi out in a yard. She seems to be feeling less stressed being at our shelter since I met her on Sunday. Larry, too, talked about what a nice girl she is and how calm and polite she acts. As you can see, Petzi liked Larry a lot, too! 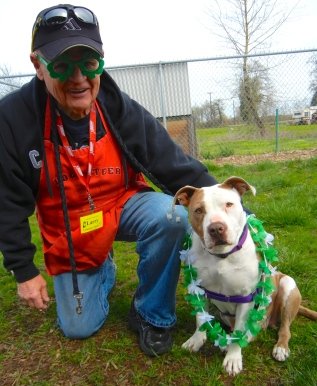 We’re both new here and we like each other a lot!

I got to welcome three new walkers today! This is Joan. Little did she know when she arrived to walk dogs, that she’d be asked to wear silly glasses. She was a great sport and put them on without hesitating. And she didn’t even take them off when Sydney went into hysterics.

Sydney is a beautiful seven-month-old Border Collie/Australian Shepherd. She walks well on leash, is affectionate, and is a very well-behaved girl. Here is a better picture after I took off the props. 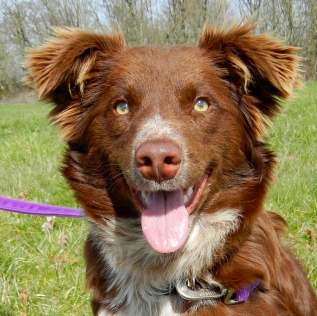 Steve, husband of Joan, is another new Wednesday walker. Today he spent some time with Domino, a one-year-old Pit Bull Terrier mix. As you know, Domino has had a rough life up until he was rescued and brought to WHS. He has been in a foster home to give him time to heal both physically and emotionally. He will need continued and consistent training to grow into the dog he wants to be. He would like an active family, as he will make a great jogging or running partner.

I’m another Brooks dog and, boy, have I come a long way!

I am always amazed and moved when I witness the resilience of a dog. Moppy is another rescued Brooks dog. He is a five-year-old Shepherd mix. When he arrived at WHS, he was so afraid, he had to be carried outside to potty and back in again. He was fearful of everything and stayed huddled in his kennel. He immediately became a favorite of both volunteers and staff because of his gentle ways and the sadness in his eyes. He was placed into a caring foster home and began to improve. In his foster home, he learned to be a normal dog. He is now back at the shelter, ready to begin a new life with an understanding family. His improvement is incredible. Although still nervous at the shelter, he now walks out of his kennel, sniffs the grass, takes treats carefully out of your hand and accepts petting and belly rubs. Debbie and I spent some time with him this afternoon and he loved it. He munched on hot dog bits, rolled over for tummy scratches, and wagged his tail. He will need a patient family who will continue to socialize him and give him the security he needs. He is a very special boy.

I have a new name! You can call me Sachi!

Bella has a new name! She is now Sachi and she’s doing great! She spent a day in Shelter Manager Jen Kaser’s office last week and here’s what Jen wrote about her day: “When I had her in the office Saturday, she was so good! She settled in and chewed and played by herself. Was not a nuisance and was good when I left the office. She’s housebroken too! Loves toys and figured out the big Kong food puzzle pretty quickly!! I really enjoyed my day with her!!!”

Sachi needs a home without young children and with experienced owners. She is a START dog and has been at the shelter since December. She’s a one year old Shepherd mix. Here she was with Sarah on Sunday. 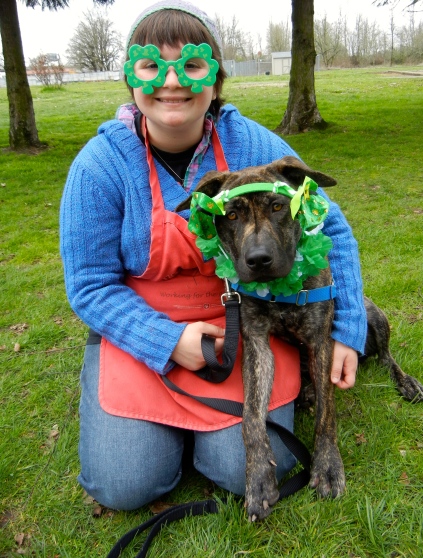 Just when I was thinking it was about time for another Mary update, here it came! How great is this picture!? Have you ever seen a happier dog? Has there ever been a luckier dog?

“Got our yard at home fenced this weekend 🙂 So Mary can run and play. Here is a picture of her running in the sun with her little friend Oso! :)” 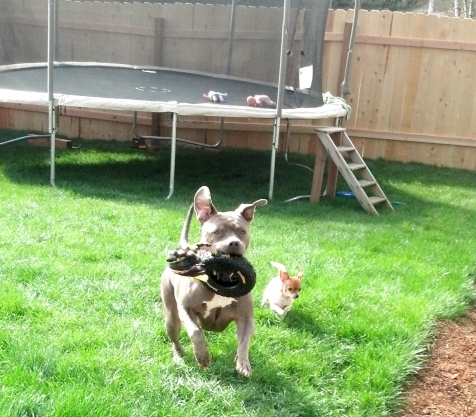