Even with WHS being closed for Easter, we had twelve dog adoptions last week. Here are the Blog Dogs who are now home. 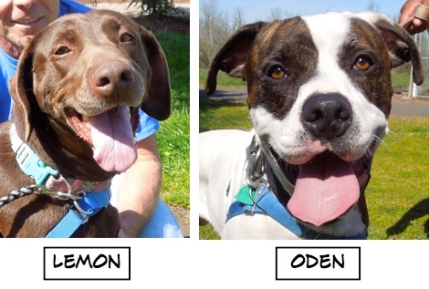 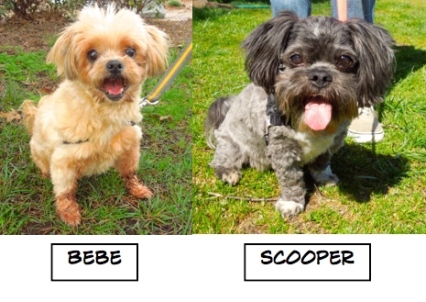 Several of these adoptions are especially touching. I first wrote about Bebe and Scooper, ages 15 and 14, in my March 6, 2013 post. These two had been BFFs for twelve years in one home. Since arriving at WHS, they have been adopted several times and returned for various reasons. We are so hoping this time will be their forever family.

So-Hun’s original person was an elderly man, nearly 90, whose ill health made it necessary for him to re-home his best friend. He was brokenhearted and so worried about So-Hun getting a good home. A friend of his found my blog and emailed me, asking if WHS could help. The friend brought So-Hun to us on Monday, March 30. I met him on Wednesday and…

he was adopted on Friday! He has an incredible home with two human siblings, two canine siblings, and an acreage to roam. Such a happy new beginning for this terrific dog and so comforting for his former person.

I was especially happy that Oden finally got his new family. He had been waiting since March 6 at WHS and had been transferred from another shelter where he had been for a long time. He’s such a great dog and finally the right person realized it!

I’ve been here a long time waiting for the perfect family for me. Are you it?

Lentil has become such a favorite of so many of us at the shelter. He is a two-year-old Staffordshire/Bull Terrier mix. He is a rough-and-tumble player with his dog friends. He isn’t comfortable around all dogs, so the dog park would not be a place he would like, and he doesn’t care for cats. He LOVES people and so enjoys hanging out with them. He won me over when I went in his kennel one afternoon. We were working on “settling.” I petted him all over and when I found his favorite scratching place, right below his ear, he laid his head in my lap and fell asleep. Here he was with Marianne last week. 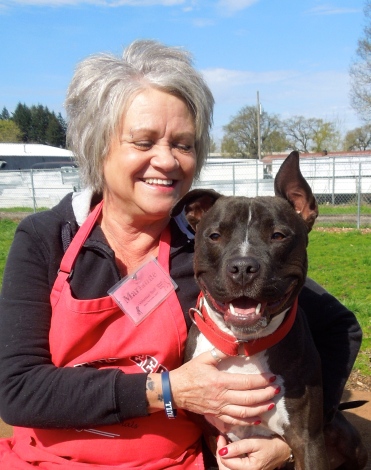 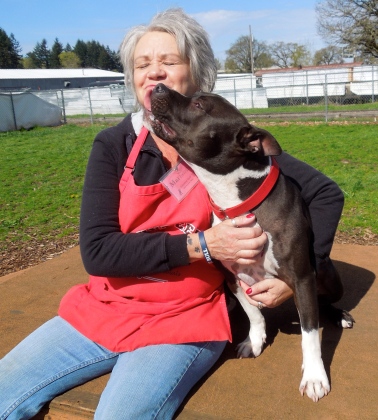 Lentil is house-trained and very affectionate. He’s been at WHS since March 13th and was getting stressed in his kennel, so BJ, our Executive Director, took him into her office for some quiet time. To say they both loved it would be an understatement. Here’s what she sent to me about his time with her along with some pictures.

“Lentil is a fun and well-mannered office mate. He loves to bounce from cushy bed to cushy bed, whip himself with tug toys and work food puzzles. He will sit politely in front of you to ask for attention, or for permission to play tug (his favorite game). He enjoys hard things to chew, like horn and hoof chews, and would probably really like the antlers we sell in the Den. He loves the everlasting treat ball, though he will eventually start ripping it up, and he enjoys de-stuffing squeaky plush toys. Much of his play is self-directed, so he lets me work at my computer without pestering, though his play is very cute and hard to ignore for sheer cuteness.
He is a really nice size at 50 pounds, and when he is not overstressed he understands polite leash walking, and picked up the “red light, green light” leash game almost instantly. He is compulsively attracted to bee catching, so needs some supervision outside. In turnout, he has a nice recall, running to me when I call him.
His dog-to-dog stress appears to be fear-based defensiveness, and I suspect when he settles into a home he may find he enjoys having some dog friends to play with or live with, but they need to be similar to him in size and energy, and not too pushy. Like most pitties, he likes to give hugs and kisses. I would recommend him with older, more dog-savvy children as he is still getting used to a lot of handling, and dislikes chaotic environments, which often are found with younger kids and their friends.” 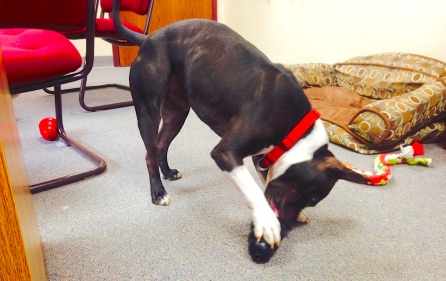 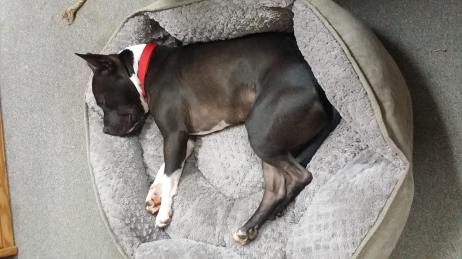 Here he is with Jolene. He knows several commands and would really enjoy the WHS training classes so that he could learn more. His many fans hope that he will be found by his forever family very soon!

Meet Shy, a ten-year-old Border Collie mix. She is looking for a relaxing retirement home with people who appreciate the intelligence of Border Collies. Shy has lived happily with other dogs, cats, and children. However, because she is an older gal and a bit timid, she would do best with older kids. She is such a sweetheart once she gets relaxed with you. Here she was with Colby. She is house-trained and walks well on leash. What a delightful girl! 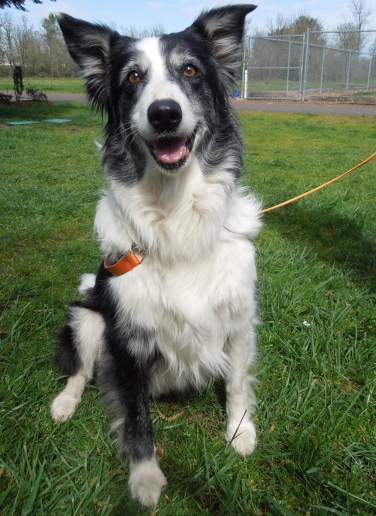 Can you see the Greyhound in me?

This stunning boy is Carson, a one-year-old Greyhound/Dutch Shepherd mix. He will need someone willing to give this exuberant youngster lots of room to run and time to exercise. He would do best in a family with older kids, since he is a big boy. He already knows some commands and is eager to learn more. He is anxiously awaiting his next adventure. Will it be with you?

This afternoon, Joan spent a long time with Carson in a turnout and I walked over to visit them. She was working on “stay” and he was catching on. This is a very smart boy and Joan was smitten with him. 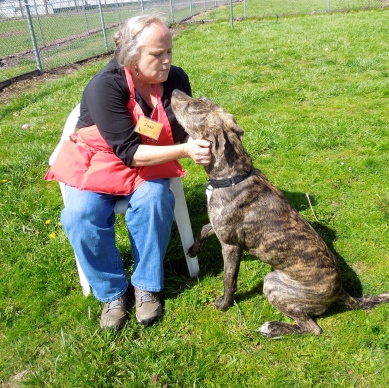 This adorable little guy is Randolph. He is an ASPCA transfer from California. He is a Terrier mix, is about three years old, and weighs ten pounds. Playgroup volunteer Marla wrote this to me about him last week: “He did amazing in playgroup. He loved all the dogs! He loved being outside. He did not want to go back. He got the group to play and not just mingle.” Sounds like a keeper to me! Love that face! 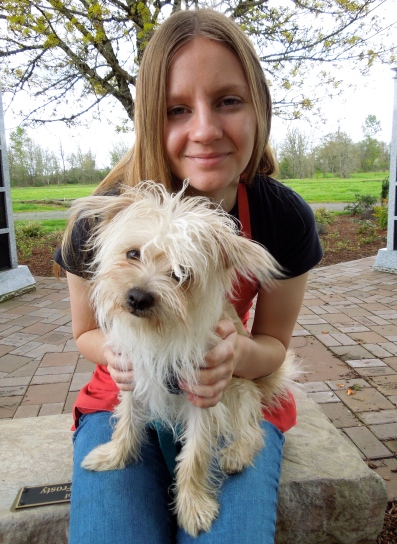 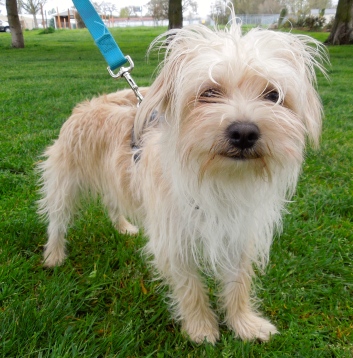 I’ve written about Thor several times. He is a one-year-old Australian Cattle Dog/Pit Bull Terrier mix. He has lots of energy so will need a family able to give him the exercise and the time that he needs. He’d love to attend WHS training classes so he could polish his manners. He is eager, happy, and excited to get the chance to learn to be the best dog he can be. Here he was after volunteer class with trainer Linda. He was the “demo dog” in teaching volunteers how to fit a Halti on a dog. Thor and we are hoping that the right fit of a family will find this good boy soon. 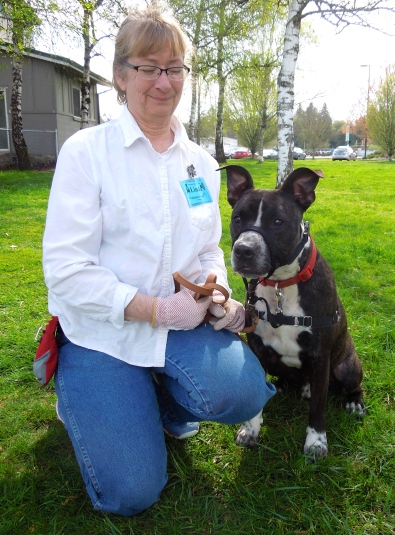 I’ve got a bit of a cold, but I’ll soon be well. The good news is you can still adopt me now!

I met Sam for the first time when I saw Colby out playing with him in the ISO yard. Sam is a ten-year-old purebred Beagle. He is looking for a retirement home where he can relax with his people. Sam is gentle and house-trained. He seems to get along with other dogs, but would need to meet any potential “siblings.” I haven’t gotten to know Sam well yet, but he sure seems like a mellow, easy-going fellow. Colby really liked him and we’re hoping he’ll be with his retirement peeps very soon.

Yep, I smile like this all the time now that my cone is off!

I was very excited when I saw volunteer Mackenzie walking Dolce today without his cone! This giant lap dog is so much happier now that his big head is free. You’ll remember this sweet boy from an earlier post. I don’t understand why he hasn’t been adopted yet. He’s a sixty-pound, seven-year-old Pit Bull Terrier marshmallow. This boy will be such a good family dog. He is house-trained, crate-trained and loves people, other dogs, and even cats (usually). He has lots of energy which he’d like to spend doing activities with his people. Since he is very food-motivated, he’s great fun to teach, and would thoroughly enjoy our WHS training classes. Dolce has a great sense of humor and is simply a delightful boy. Some family will be very lucky to get this sweet lap dog! Mackenzie is one of his many WHS fans.

Yes, I really am this happy!

Oh my goodness! I met this energetic happy machine for the first time today. His name is Petie and he is a two-year-old American Bulldog mix. Caroline brought him out for his “photo shoot” and he never stopped grinning once! This little character is full of zest and has a nanosecond attention span, but oh, the possibilities! Petie LOVED my hot dog bits, so will be a snap to train. He already knows “sit” and “down,” although he thinks it’s “down and instantly jump up,” so still needs a little work on that one. Petie will make a great family dog for older kids due to his energy level. He would love to be a jogging or hiking partner. He’d also excel at WHS training classes which he would find to be a blast. I have a feeling this boy won’t be at the shelter for long.

I’m new here, too! But I doubt if it will be for long!

Another newbie I met this afternoon is Mahlaya, a ten-month-old Plott Hound/Black Mouth Curr mix. She experienced her first playgroup today and did great. She already knows some commands and is so eager to learn more. She’s another great candidate for our WHS classes. Mackenzie spent a long time with her out in the yard and they had a wonderful time getting to know each other. What a wonderful young girl Mahlaya is! 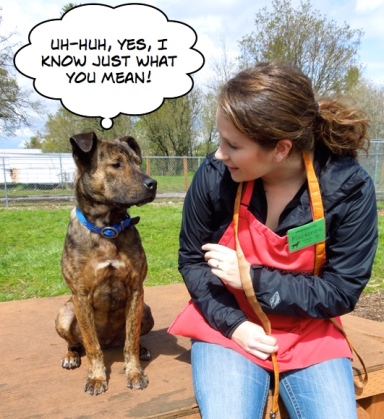 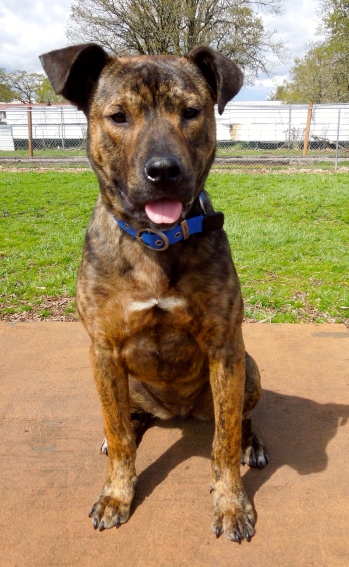 We have so many terrific dogs waiting for their forever homes right now! So on that note, that’s it for this week!