When I realized that this post would be published the evening before Valentine’s Day, I knew the shelter dogs would want to have some fun, so I arrived on Sunday with props. (As always, while my wonderful volunteer team rolled their eyes, they cheerfully played along.)

But before I show you the fun we had on Sunday dressing up, I want to tell you about two dogs who recently got to have respites from the shelter.

I got to go to the park! I saw ducks! Lots of ducks!

Chicharito is a five-year-old Cane Corso mix. Never heard of this breed? Well, the American Kennel Club describes their temperament as “affectionate, intelligent, majestic” and that is exactly what Chicharito’s personality is like, although we would add “joyful.” This is Chicharito’s second time at WHS. He first arrived in early March of 2015, was quickly a volunteer favorite, and was adopted later that month. He came back to us last January. 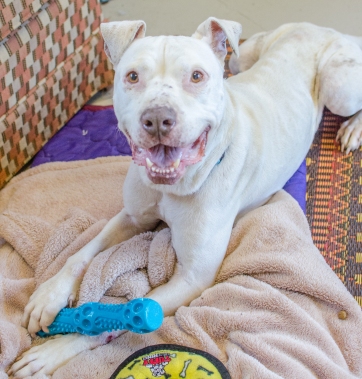 Chicharito has atrial fibrillation and cardiomegaly, which means he has an enlarged heart and an irregular heart rate. Since being diagnosed at WHS, he has been on medication and has shown significant improvement in his heart rate. He will remain in Afib, however, so is adoptable as a hospice dog. He will need a quiet lifestyle. Chicharito is waiting for a special family who is willing and able to continue his medication and realizes we have no way of knowing what the future holds for this sweet boy. But we do know that there are adopters with open hearts for our hospice dogs, who find joy in giving a loving home for however long a dog has. Chicharito loves kids and would do fine with kids about ten and older, due to his size. He will need a feline-free home. Marianne and Chicharito have forged a special bond and I was invited to tag along on an outing with them and Ayla to a nearby park. We had a great time. 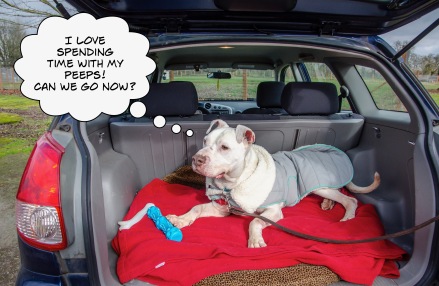 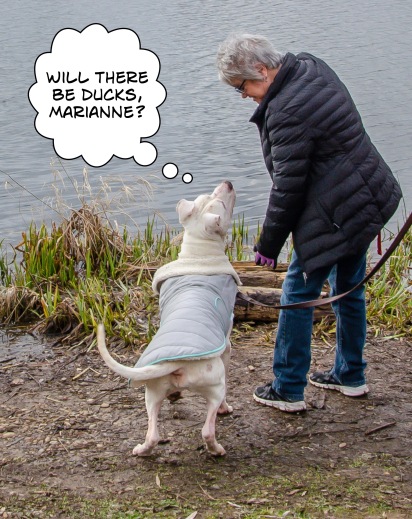 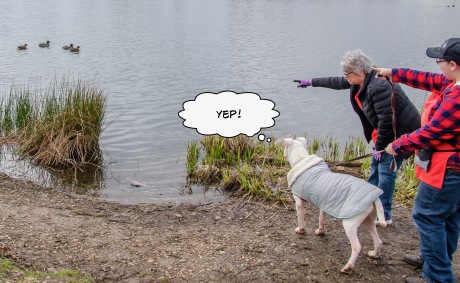 We’re hoping that the perfect person will open their heart and home to this special dog.

I got to go on a coffee run, even though I don’t like coffee!

On Monday, Echo got to go for a ride. She is an eight-month-old Shepherd mix.

Jolene is one of her fans. 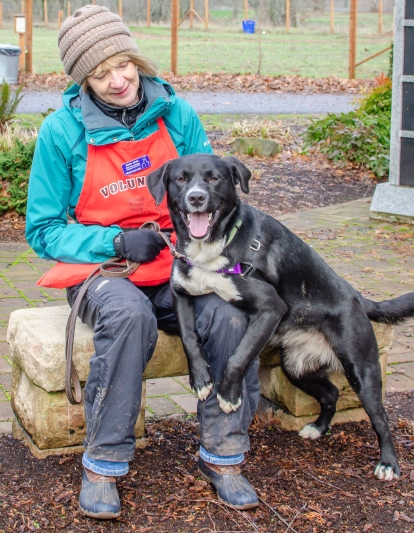 Echo is a youngster looking for a family interested in positive training. To help, her adoption comes with two WHS training classes, one for her human, Dog Smart, and one for both her peeps and her called “Check In and Chill Out.” Echo was adopted once, but was too interested in the cat, so was returned. She will need to go home with children ten and older because of her youthful enthusiasm. And, of course, a feline-free home.

Here’s what Jolene wrote about Echo’s outing. “Echo went for a car ride to TrippDog coffee stand today with her friends, Jolene and Linda. This was a test to see how she acted in the car. She passed with flying colors. For such a happy, active girl she was very polite and quiet riding in the car. She just curled up and enjoyed the adventure. She especially appreciated the dog treat the nice woman at the coffee stand gave her.” 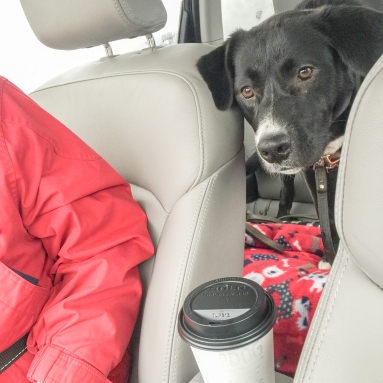 We’re hoping that an active family will see how much potential this young girl has to be a terrific family dog.

I’ve been here before and was popular then. Now I’m even MORE popular!

Tyke is a three-year-old American Staffordshire Terrier mix. Like, Chicharito, this is his second time at WHS. He first arrived in December of 2017. He was adopted, but surrendered again last month due to a flea allergy which had caused him to lose most of his coat. He was put on medication immediately and is looking much better now, though he still has a ways to go. Tyke is quite the ham. We brought him in for Valentine’s pictures and he had a blast.

We started out slowly, to see if he enjoyed dressing up…

So far, so good. He loved posing!

Then we added Marianne…

And then this happened…who knew Tyke could sing?! 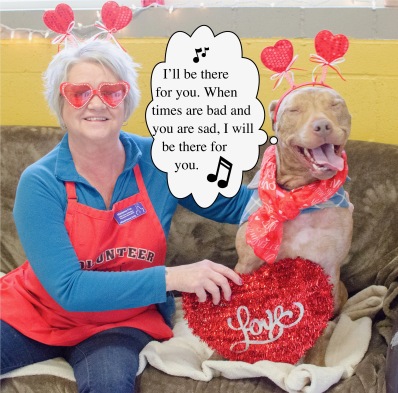 Tyke is looking for a home with older kids, as he can be somewhat jumpy in his zest for life. He loves people, though is somewhat dog selective and will need to meet any other dog he will be living with. He is house-trained, treat-motivated (especially cheese-motivated). He will never be a dog-park kind of boy, but will be happy to be an only dog with his peeps and a Frisbee in the backyard. Tyke was in such a joyful mood, we decided to take him out to a yard for some Frisbee fun, his favorite thing in the world. 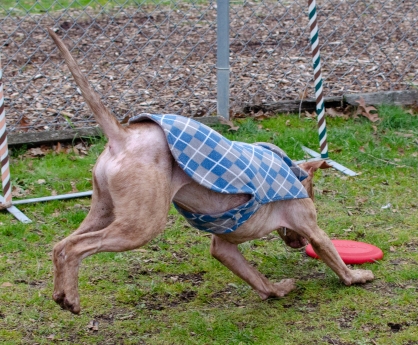 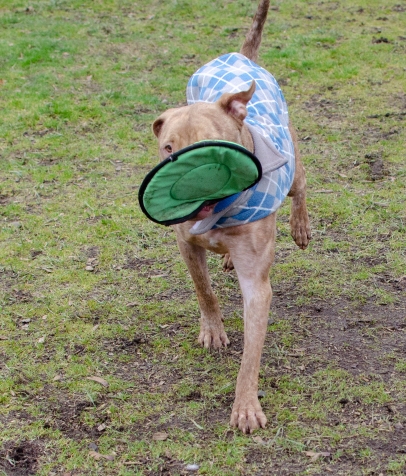 We’re hoping that Tyke will soon be in his forever home where he can sing and play with his very own peeps.

Volunteers and staff are baffled as to why Apollo is still here!

Apollo is a one-year-old Shepherd mix who came to WHS December 27th. I haven’t featured him in my blog because I was so sure he would be adopted quickly. But he wasn’t. So on Sunday we brought him into Mary’s Place to see how he liked dressing up. After some initial confusion, he loved it! 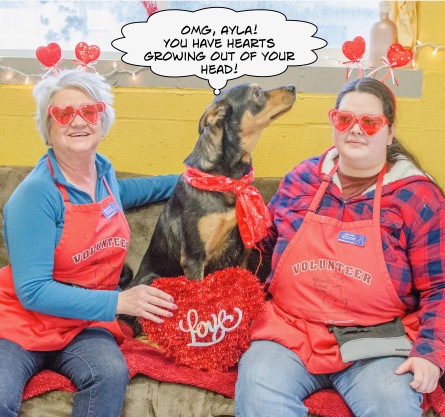 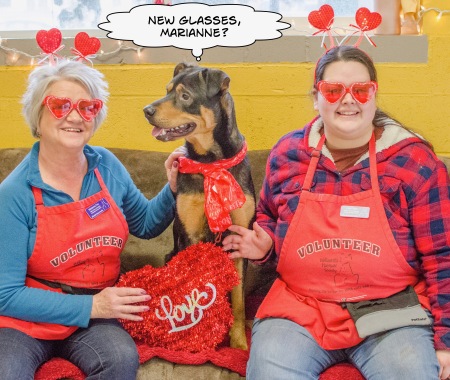 What a good poser he is!

At fifty-four pounds, Apollo is just right as a medium-sized dog. He’s been wonderful in our playgroups, getting along with most everyone. He is house-trained, eager to please, and already knows several commands. Apollo has not had an easy start to his young life and will need some understanding, patience, and only rewards-based training to overcome his fear of punishment. He should go home with older kids and needs a feline-free home. Did I mention how smart and excited this boy is to learn new things? Training with him will be so much fun. He’s a lover of cheese, by the way. This youngster knows that his kennel presentation could be improved and is working on it. He’s just so excited to meet his new family, it’s hard to tone down his enthusiasm. Apollo will make a wonderful dog for a family who will be kind, patient, and who will help him gain confidence. What a gem of a dog!

And did I mention what a great sport he is? (Ayla is, too!)

Here are more fun shots from our Sunday afternoon. Some of the dogs were adopted shortly after the photoshoot, but they were too cute not to include! 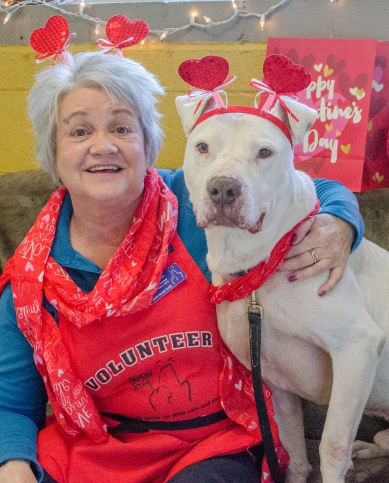 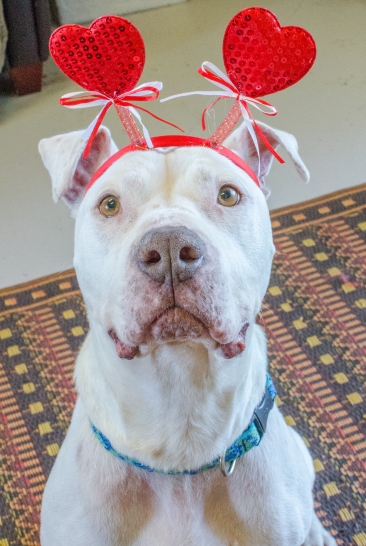 Hero and Megan (Hero has been adopted!)

Dodger and Caroline (Dodger has been adopted!) 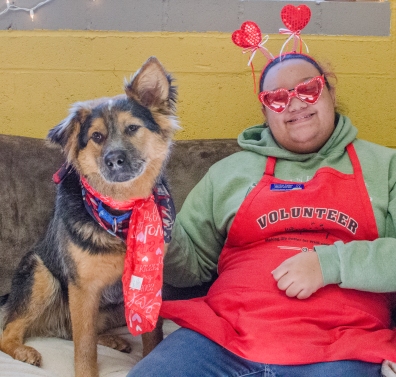 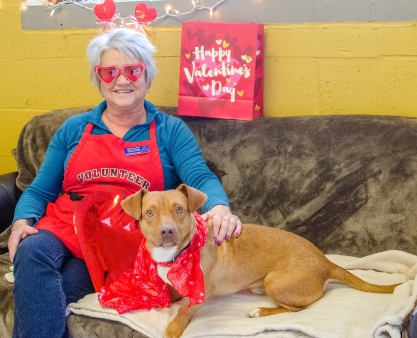 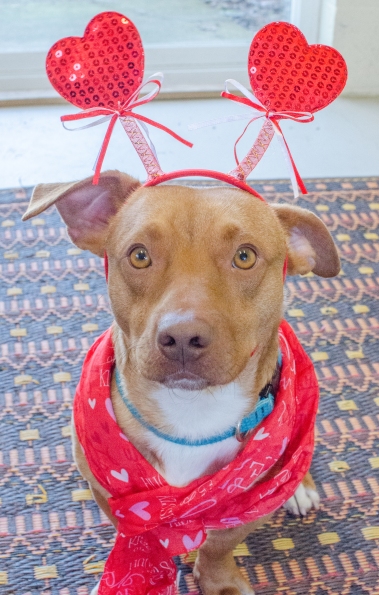 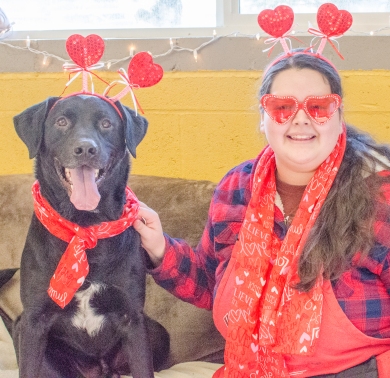 Sapphire with Ayla and Caroline

Sapphire suddenly wanted me to stop taking pictures for a moment. 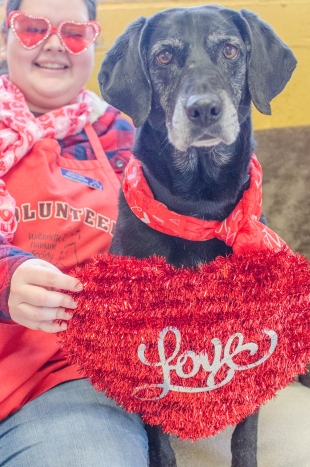 Champ with Ayla and Marianne 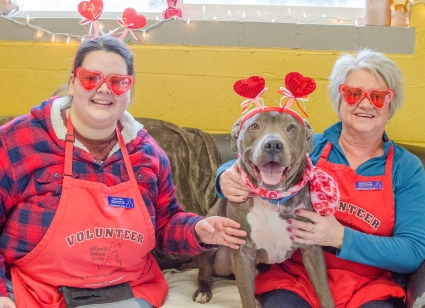 Ming with Marianne and Megan (Ming has been adopted!) 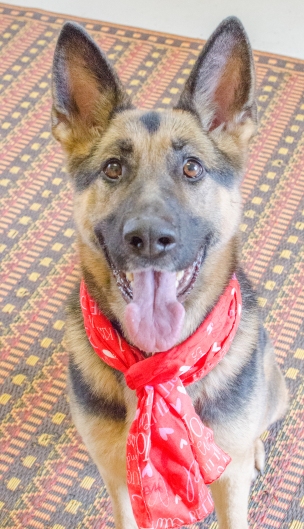 I probably don’t have to tell you that there were MANY Valentine Outtakes! But here are a few of my favorites. Notice the calm, quiet pictures of Ming just above? Here’s the REST of the story… 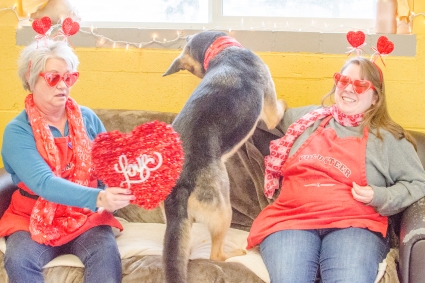