We had such a happy reunion on Sunday afternoon. Remember Monty, one of our Maui transfers who had been attacked (they thought) by a wild boar and lost much of his mouth? Here he was with one of his biggest fans, Marianne. 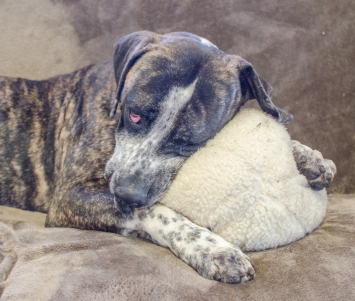 We were thrilled when he was adopted into his perfect fit of a family. Here he was leaving for his new life.

Monty’s family has sent several updates, and on Sunday they came in person for a little reunion. Here are some pictures of our wonderful time together.

He remembered Megan, too.

To show you just how happy this guy is at home, here’s a video clip.

Here is one last picture of Monty at home. His peeps told us that Monty and Lily have a very special bond. Lily is an outdoor cat, but every time Monty gets up on the porch couch, Lily joins him. 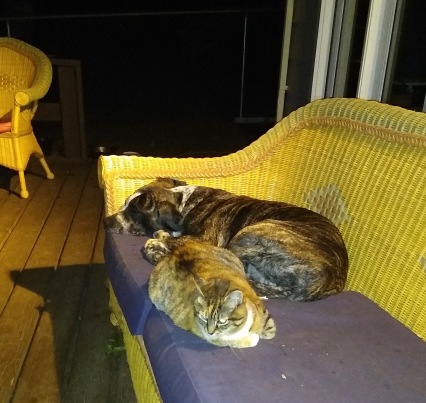 It means so much to us when we get to hear and see the happy new lives of our shelter dogs.

Are you looking for a smart dog with a lot of personality and get-up-and-go? I’m here!

I first met Az last week and instantly liked him. Az is an almost two-year-old Shepherd mix. He was found as a stray, so we don’t know any history. He can be jumpy in his zest for life, but he is working on keeping his feet on the ground and giving calm greetings. We took him out to a yard before I took his pictures to see if he would like to play fetch. He did. I was so impressed when he brought the ball back to me and dropped it at my feet. 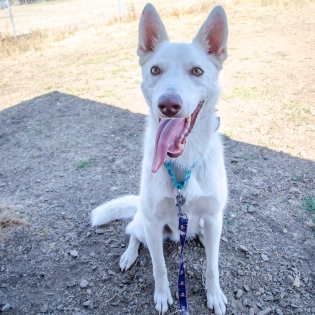 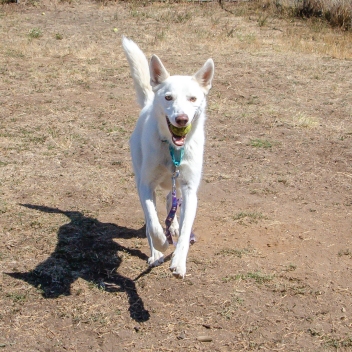 I looked forward to seeing him again this week. I found that he is still working on not jumping, but could also settle nicely and knew the commands sit and down. 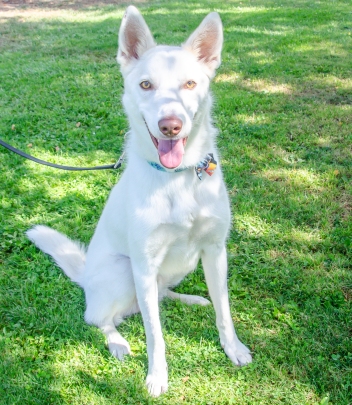 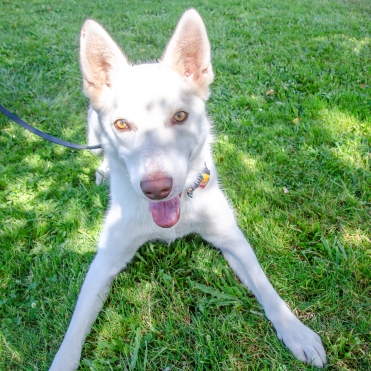 Linda brought him out to a yard for me to get more action shots of him playing and he did not disappoint. 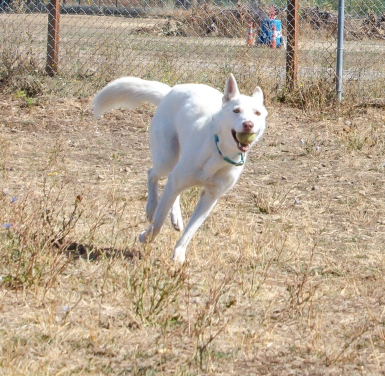 Then it was time to relax. We quickly discovered his love of cheese. 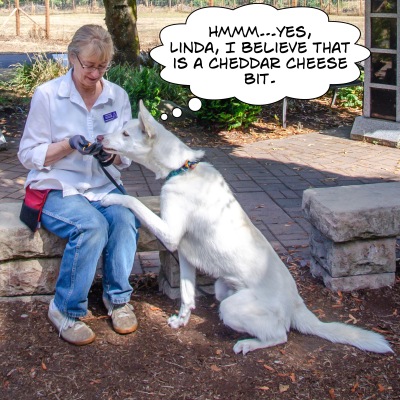 Az is rated for children ten and older due to his youthful enthusiasm, and his adoption also includes a free Dog Smart class as well as 50% off of a 30-minute private lesson and 50% off a private behavior consultation. With a little more positive training, he will make a terrific family dog. He is selective about his dog friends, so would need to meet any he would be living with. Before we took him back to his kennel, he enjoyed a Mary’s Place respite with Megan.

I may look a little bedraggled, but the peeps here really like me. I hope you do, too!

Toffee is about eight years old and is a mixed breed boy who has not had an easy life so far. He was found as a stray and had missing hair on his back, perhaps due to allergies or fleas. He also has some scars on his head. The first time I met him, he seemed sad and unsure. 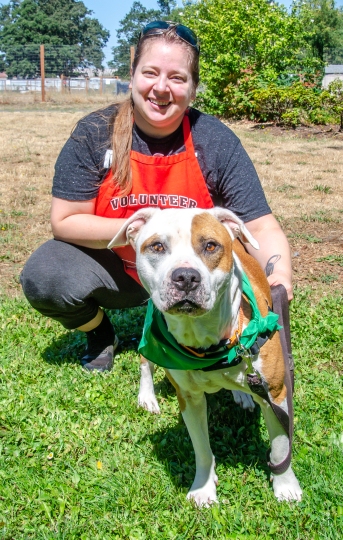 But I am always amazed by a dog’s resilience. This week, Toffee was a very happy boy, and seems to be enjoying his time at the shelter making new friends. He has not done very well in playgroup, so will need to be an only dog. But, oh, does he love attention from people! He must have been loved once, as he takes treats nicely, walks well on leash, and is house-trained. When he plays fetch, he brings the ball back and drops it in your hand.

Toffee’s adoption also includes a free Dog Smart class as well as 50% off of a 30-minute private lesson and 50% off a private behavior consultation, so that Toffee’s new family gets off on the right paw with him.

I decided that you needed to see Toffee’s excellent manners playing fetch for yourself, so I made him a movie.

Toffee deserves to find a loving home. We’re hoping his new family will take him soon.

Looking for an easy-going, not complicated, happy-go-lucky, slightly overweight dog? I may be just the perfect fit for you!

Kaylahana, an American Staffordshire Terrier mix, is about five years old. She is a big girl at 82 pounds, but she doesn’t like to dwell on that. Kayla, as we call her, is a doll. She walks perfectly on leash, is house-trained, takes treats gently, and loves everyone. Kaylahana is recommended for children ten and older. She was found as a stray by some kids and brought to WHS with some missing hair and ear infections. She was very serious when she first arrived. 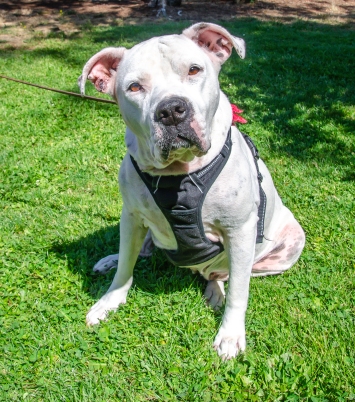 But she is better now and ready to start her new life. If you are looking for an over-active, excited, bouncy dog—Kaylahana isn’t your dog. However, if you are looking for someone who ambles rather than rushes, prefers sitting on the couch to a run, and loves cheese bits, well, Kaylahana may be just the perfect fit for your family.

She has perfected the “Got any treats?” look.

She likes to surprise you with affection.

She has the sweetest look when she’s hoping for cheese bits. 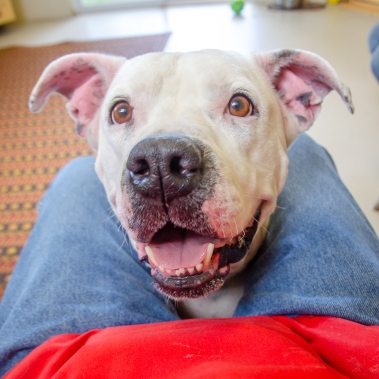 We decided to take her out to the big yard to see if she’d like to race, play fetch, or swim in the pool. 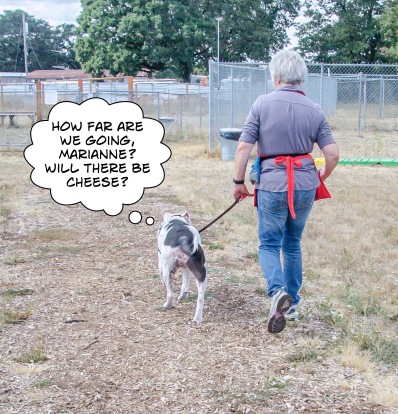 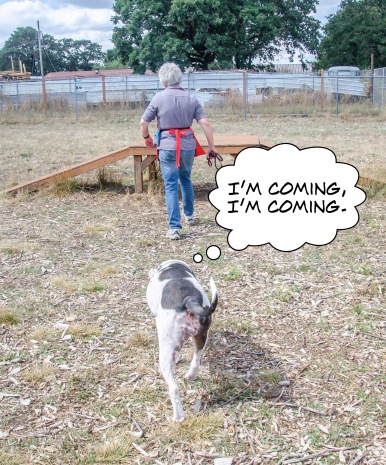 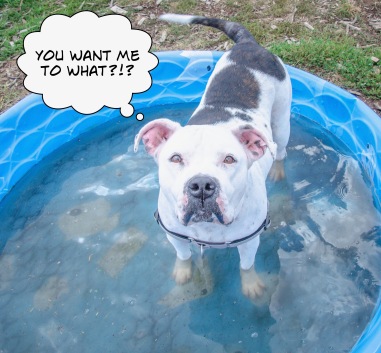 All kidding aside, Kaylahana is a real sweetheart. She won’t be a marathon runner, but if you’re looking for a new devoted best friend and good listener, she just might be your perfect dog.

Mutts on the Mile!

I want to take a moment and tell you about a special WHS event happening soon. It’s called Mutts on the Mile and will take place on Wednesday, Sept. 18, 5:30 p.m. at Capitol Subaru. We are hoping for a big turnout of WHS alumni dogs! Since I know that many of my readers of this blog are alumni owners, here’s the scoop!
https://whs4pets.org/its-time-for-mutts-on-the-mile/ 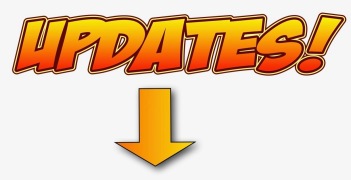 Remember sweet Reeves from Maui? This big boy was an instant shelter favorite. We were thrilled when he was quickly adopted after his arrival in Oregon by this couple who came into the shelter just to look and went home with Reeves.

This week I got the following happy update.

“Hi!  We wanted to let you know that Reeves, adopted one week ago on Sunday, is doing great!  He is as wonderful as you all described!  Very calm, affectionate, sweet.  He sleeps on one of his two dog beds at night, rides in the car, goes for walks, loves going in the pond to cool off, and is getting better and better at retrieving the ball and actually returning it!  He’s waiting a bit more for his first visit to the dog park, until we’re a bit more familiar with his behavior.  We are very pleased with him, and I am certain he is happy here also.  Thank you so very much for your services, and for taking good care of him.” 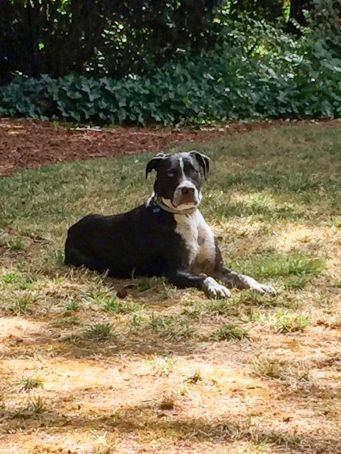 Ozo arrived at WHS last July. I wrote about him in my July 24th post:

Ozo is a seven-year-old Bassett Hound mix with a delightful sense of humor. I first met Ozo in September of 2017 when he came to WHS as a stray. He was quickly adopted, but was recently transferred to us from another shelter, having once again been found as a stray. We’re hoping that Ozo will finally find his forever home.

We were thrilled when this couple fell for him and took him home the next Sunday.

I was so happy to get this update today!

“We adopted Ozo back in July. He is a super dog! Not sure his story but he sure does like to tell it.  He enjoys walks in the park or around our neighborhood. We did discover very quickly that his favorite toy is squeaky balls, of any variety. Being an older dog and a rescue has come with challenges but this little dog has a mighty personality.” 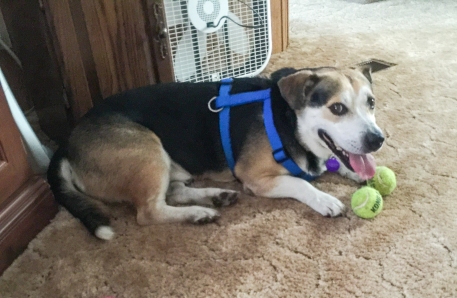 With those happily-ever-afters, that’s it for this week!