I want to start this week with some fantastic news.

Our Toby was adopted! Toby has been waiting for his perfect family fit since July. I’ve written about him in my blog many times. Sunday was his day! I was so glad I could take some going-home pictures.

Saying goodbye to our boy was a little hard, but we were so happy for him. 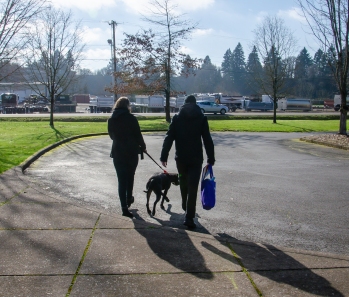 Sunday evening I got this happy email.

“I wanted to send you some pictures of Toby. For the first few hours he was home he was really excited but when we introduced him to the bedroom, he jumped right on the bed, pulled a blanket on himself and took a nap.”

Toby has waited so long for his new family. We are over the moon that he finally has it.

Have I written lately about how wonderful my photography team is? I am especially grateful to them when a holiday approaches and I show up on Sunday with props. Not surprisingly, there is some eye rolling and heavy sighing, but at the end of the day, I have my pictures. I’m also always amazed at how tolerant the dogs are of my shenanigans. So I am grateful to them, too. Now, let’s get started with the Valentine Post!

You say you don’t want to go through the challenges of a puppy? Well, I may be the dog for you!

Meet Stanley, a thirteen-year-old Spaniel mix who has won the hearts of everyone he has met at the shelter. When he arrived, Stanley was quite a mess. He was extremely matted and we could tell he was very uncomfortable because of the mats. That’s when our terrific volunteer groomer, Ayla, stepped in. She reported he was an absolute angel during his entire grooming session and she could tell he felt so much better after it, he even had a spring in his step.

Stanley first came to WHS in 2007 and was quickly adopted. He came back to us in January when his family couldn’t take care of him any longer. Stanley is looking for a calm and quiet retirement home. He seems to have limited vision and hearing. He also has some skin allergies that will need to be monitored and treated if they recur. Because of his age issues, he should not go home with young children; older teens would be fine. Stanley has been to several of our playgroups and while he is no longer a romper, he does mingle with the other dogs. We fell in love with this sweet senior the first time we met him, and on Sunday Marianne, Megan, and I took him into Mary’s Place for some Valentine posing. He couldn’t have been more cooperative, even though he was mystified by what his friends were wearing.

Stanley won’t be one to go on grand adventures or long hikes. But he will be one to snuggle beside you on the couch and thank you for giving him a loving forever home. We hope he won’t have to wait too long for his special family.

Yep, still here. Still waiting for you. Can I be your Valentine gift to yourself?

I have written about Rufus many times since he arrived at WHS last July from another shelter, and yet he still hasn’t been found by his new family. So on Sunday I asked him if he’d be willing to dress up for Valentine’s Day to put a new spin on his appeal. He wagged his tail in an enthusiastic yes!

If you are a first-time reader of my posts, let me tell you a little about one of our favorite shelter dogs.

Rufus is a mixed-breed boy who is about seven years old. He is active with a great sense of humor and is all about loving people. He’s been adopted twice. The first time the family had a small child. Young children can be grabby and unpredictable and Rufus was not comfortable, so he will need to go to a home without young kids. His home will also need to be cat-free, as felines are too tempting to chase. The second family’s situation changed and they had to give him up, though they loved him a great deal.

What does Rufus like to do more than anything else? Hang out with his peeps. His love of people and his optimistic outlook on life will be all his family needs in a new member. He spent two weeks recently in a foster home and they had so many positive things to say about him: “Rufus is a joy to have around the house. All he wants is to give people love. He loves sniffing and frolicking in the yard, and is fascinated with looking at himself in the mirror. He doesn’t usually beg or bother me when I’m eating, but he LOVES peanut butter. Rufus has been really good with guests. After they’ve come in, he will come to greet them and ask for petting, but doesn’t jump on them.”

Rufus’ one behavior issue is that he can be quite reactive when he is on leash and sees another dog. And, of course, he is a lot of dog. However, his foster said Rufus made some real progress in his reactivity during his stay with him and feels with continued positive training, he will be able to conquer this issue. Rufus’ happy, loving, eager-to-please personality makes him so worth the effort it will take his new family to continue working on his reactivity.

Remembering how cooperative Rufus was in dressing up for my Santa post in December, we were sure he’d be game for Valentine props. He thought posing with Marianne in their heart-themed bling was great!

Even though Rufus has been waiting a very long time for his new family, he has remained upbeat and optimistic. Dogs live in the present and Rufus thinks that any minute his perfect person will walk into the shelter, find him, and take him home. We’re hoping this deserving boy is right.

We know we’re not the right dogs for everyone, but all we need is one family with some space and a love for two devoted sisters!

Mia and Sam (Samantha) arrived at WHS from another shelter January 31st. They are bonded sisters and are absolutely hilarious. Got space? Like to laugh? Don’t mind if a few knickknacks get knocked over? Well, these girls may be perfect for you. 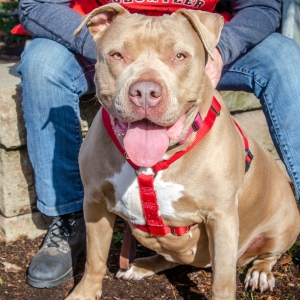 I took the next three pictures on the day we met them. Ayla and Marianne fell for them, as did I. They have been together their whole lives and their sister love is a joy to watch. They never argue, they share treats, even food bowls, happily, and always know where the other one is…

…while at the same time, loving people.

This is what happened when Caroline arrived, meeting them for the first time. Watchdogs? Not so much.

As you may have noticed, Mia needs to lose a few of her 86 pounds. She doesn’t like to talk about it, but agrees that fewer treats (she loves cheese) are in order. Both girls are very social and outgoing. They are American Staffordshire Terrier mixes, are seven years old, and were litter mates. They have had happy lives where they got to go to the lake to romp, sleep in their crate together (except for the times they would sneak up on the couch), and play with the two children in the family. They are rated for kids about ten and older. In their former home they shared everything, were house-trained, and were calm and lazy inside the house. When they got excited to play, they were sent out to their fenced yard to frolic. They love tennis balls and stuffed toys (though the stuffing is soon gone). They did not bark unless someone knocked at the door, and then it was only one quick announcement. They both loved to curl up in a blanket in front of the wood stove and nap.

When I saw them out for their afternoon walk on Sunday with Angie and Kaylee, I grabbed my props and headed out.

Later in the afternoon, Marianne, Megan, and I took them into Mary’s Place. They were very excited at first with all the action and props and had us laughing non-stop. Trying to get BOTH of them to pose at the same time was a hilarious challenge.

Then I got out some cheese bits.

Sam decided to wear her heart headband a different way from everyone else. 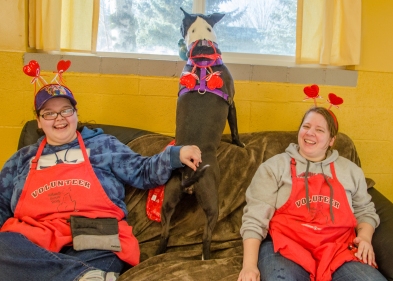 Linda stopped in to meet the girls and started to laugh when they welcomed her.

Sam thought Ayla’s and her matching attire was fabulous.

Mia had their potential new family on her mind.

After all the excitement of the afternoon was over, it was time to fully relax.

Bonded pairs, especially when they are big dogs, are a concern at the shelter. It will take a special family to adopt them, but oh, what rewards they will give their new peeps. We’re hoping that special family is reading this post.

These three are all decked out, ready to be adopted for Valentine’s Day! 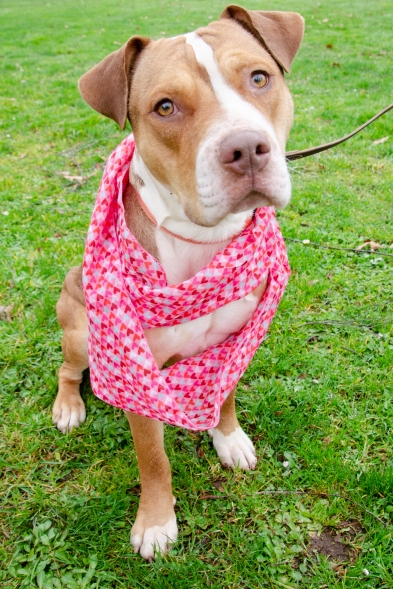 Newt is a two-year-old Pekingese mix who is absolutely adorable, here with Megan. 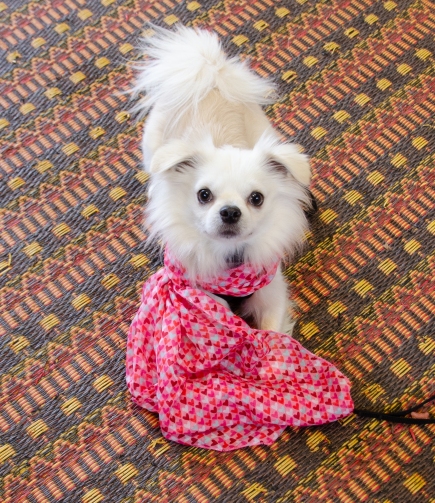 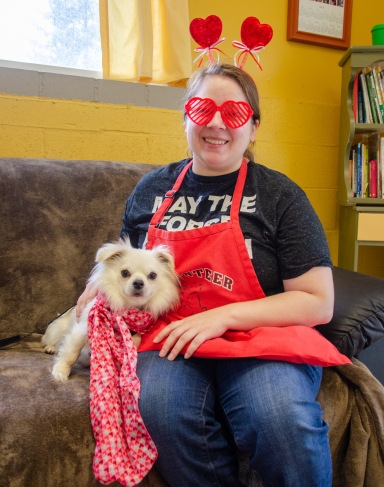 Bentley is a ten-month-old Mastiff mix. 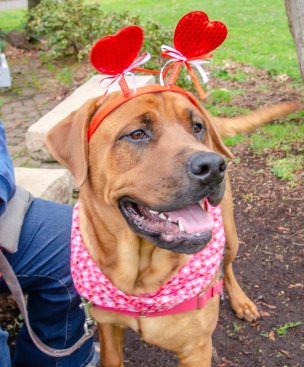 Let’s just say that trying to get Mia and Sam to pose together looking at me at the same time, was a bit of a challenge.

We have one terrific update this week. Remember our sweet senior, Grady? We so wanted him to have a wonderful retirement home. Well, he got it. Here’s the update.


“Grady is doing wonderfully. He is sleeping on me right now. He does a great job of ‘helping’ me write in my patients’ charts. He has latched onto me more than anyone else in the family. I don’t mind some extra snuggles after a long day as a hospice nurse. 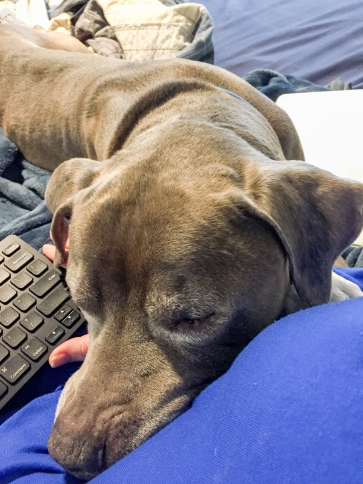 He spends most of his time on couches. 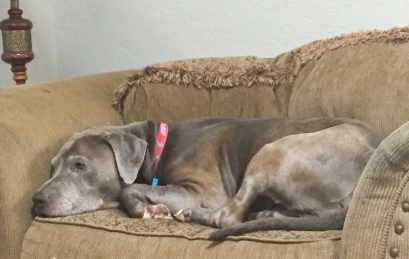 But he likes playing in the yard. 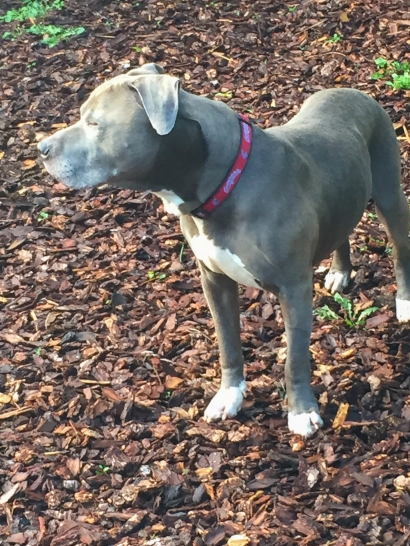 Our youngest is an animal lover. He has been spying on Grady since he got home. Grady now sleeps with him at night.

We have discovered that Grady is afraid of bathtubs. Overall he is a great dog and we love him to bits. He looks like he is getting a little more meat on his bones. He has had his first vet visit and is in good shape. The bald spot on his bottom has completely filled in. He is such a good boy!”

He’s afraid of bathtubs! Who would have thought?! On that happy update, that’s it for this week!