I have some very happy news with which to begin this post. Last week I was lucky enough to meet two families who adopted two of our terrific dogs, and I want you to see the happy pre-adoption pictures.

It was love at first dog-sight for this couple who, by the way, had also just gotten engaged earlier in the week.

This couple couldn’t wait to take our sweet Willow home.

And now I want to introduce you to three more terrific dogs who are still waiting for their forever homes. 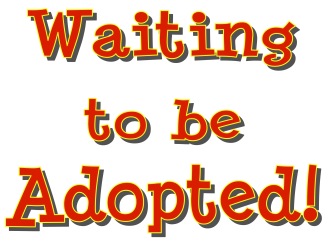 I arrived at WHS extremely nervous and shy, but look at me now!

When I first met Buster, I felt so sorry for him. He had just been brought in as a stray. People had seen him running around for about three days before a good samaritan was able to bring him to the shelter. Buster was totally overwhelmed and nervous, as you can see by my first pictures of him, which I had to take from quite a distance away, as he didn’t want me close to him.

It took several days to convince Buster that we were his friends. He seemed to want to get close to people, but was so timid, he shied away from human touch. Buster is about two years old and a mixed breed boy. Because of his timidity, he is rated for kids about 13 and older. We don’t know anything about Buster’s history, so decided on Sunday to spend some quality time and get to know him. We were happily surprised by what we learned about him. While we could not get even a little relaxed smile, he let us know in other ways that he is becoming comfortable with us. Since Ayla had spent the most time with him, he warmed up to her immediately. 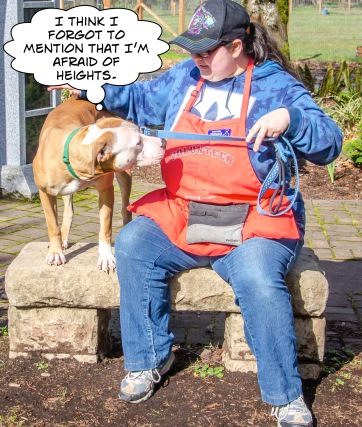 We took him into a yard to see if he wanted to play. While he didn’t play fetch, he enjoyed running back and forth to us. 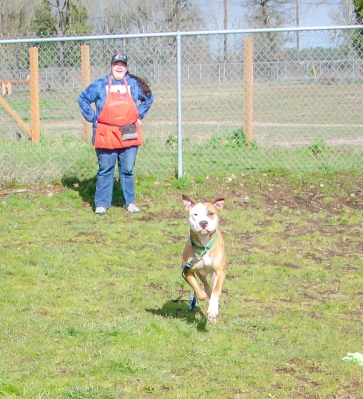 Since he was feeling more and more comfortable, we took him into Mary’s Place and that was when he fully relaxed. 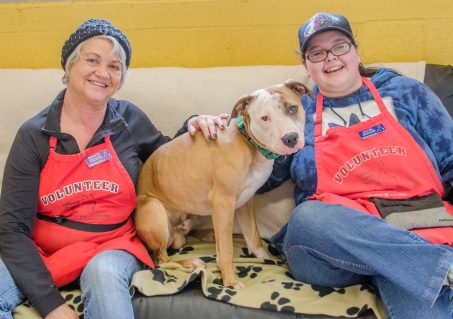 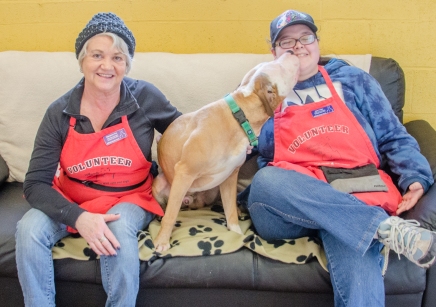 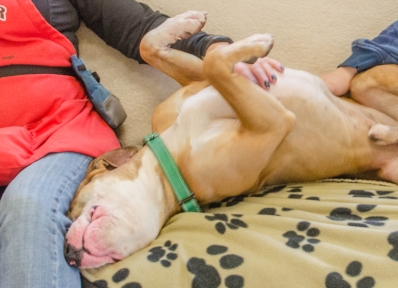 Then this happened. Turns out he DOES like toys!

After playing, Buster was happy to settle down again.

Like so many shelter dogs, Buster just needs a little time to get to know his friends. We are hoping that a family with a little patience and a lot of love will find Buster and take him home.

I may be eight, but boy did I have the photo team fooled!

Tyson is an eight-year-old Boxer/Rhodesian Ridgeback mix. When we first met him a couple of weeks ago, he seemed old and sad. Boy, were we wrong.

Tyson has lived with the same family his whole life, but because he can get ear infections and has some skin allergies, the family could no longer afford to take care of him. Since being at WHS, medication has done the trick and his coat is healthy and sleek. He will need to be monitored by his next family to catch the allergies early should they crop up.

Since we had not spent much time with Tyson except to take his profile pictures, we took him into Mary’s Place, thinking he would not be very active. We were amazed and delighted to discover behind that graying muzzle is a puppy who loves toys! 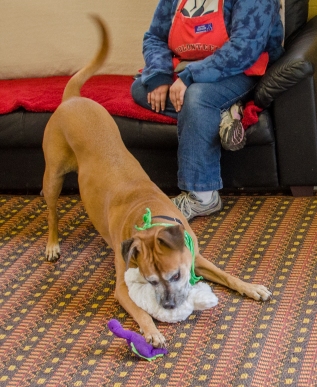 So here’s the scoop on this wonderful dog. Tyson has lived with other dogs, but would need to meet any dog siblings he might have in his new family. He finds cats too much fun to chase, so needs a feline-free home. He has a great history with children and is rated for kids about eight or older. He knows several commands including sit, down, stay, speak, come, and shake (with either paw!).

Tyson is afraid of loud noises such as fireworks and thunder. He is also afraid of water. He has never destroyed anything in the house when left alone, however he does cry some, so a family who isn’t gone a lot would be perfect for our boy. When strangers come to the door, he will bark, but then let them pet him. Of course he is house-trained, has been for years. He enjoys car rides and walks in the neighborhood. He walks nicely on leash. Marianne, Megan, Ayla, and I had so much fun with him in Mary’s Place. His two favorite toys were the GFB (Giant Fluff Ball) and the plush lamb. 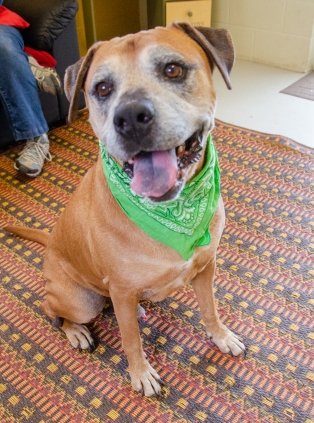 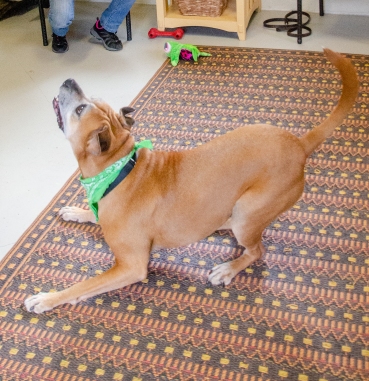 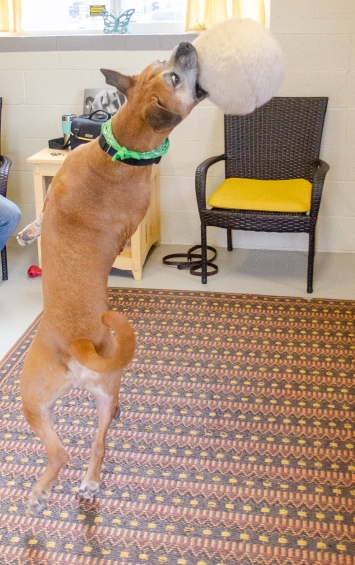 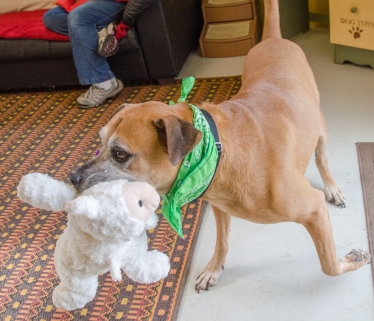 We decided to take him outside and see if he liked playing fetch. He did! 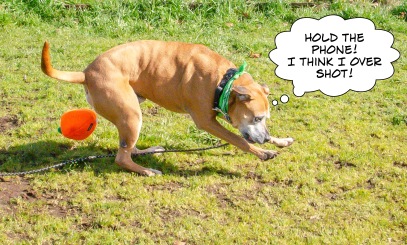 Tyson can’t wait to find his active retirement home. While he loved to romp out in the yard, he was ready to come back in and relax after about fifteen minutes. After all, he’s not a youngster anymore. 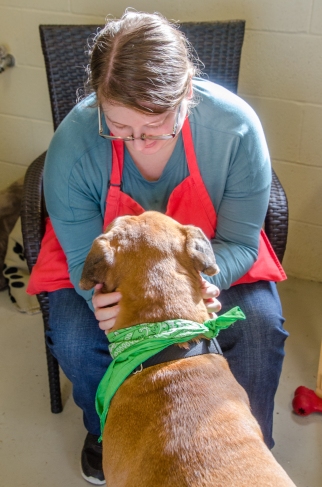 I’m back. I know my just-right home is out there somewhere, if we can only find it. Are you a homebody? So am I!

Pepper is a six-year-old Australian Cattle Dog mix. She arrived at WHS in May of 2019 after her person died. I wrote about her in my July 31 post and made a movie about her since she became one of our long-termers. She was finally adopted in August. She was surrendered recently because she and the other dog in the home were not getting along. So we now are looking for a home where Pepper is the only pet. Here she was on Sunday. 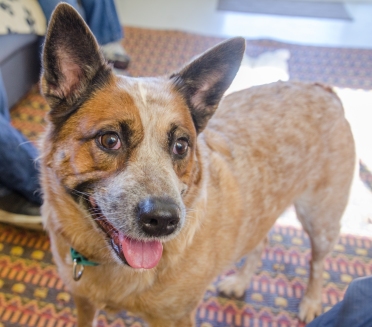 Pepper is looking for a special family who is understanding and patient. She would love to live in a quiet home with a backyard where she could hang out. Pepper is not a clingy dog, but is happy to be with her peeps. She is very treat-motivated, cheese being one of her top five favorite treats. She walks well on leash and once relaxed, has a beautiful smile. Pepper would like a family where there is someone home most of the time, as she can be anxious when left alone. She is nervous around new people, especially children, so needs a family with teens 15 or older. She can be somewhat handling-sensitive, especially around her head. Once she relaxed in Mary’s Place, she was eager for cheese bits and liked being close to us. 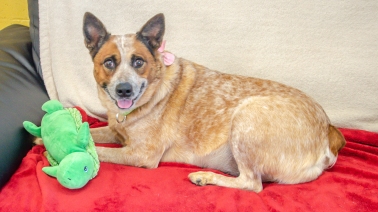 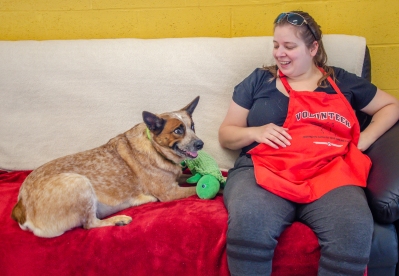 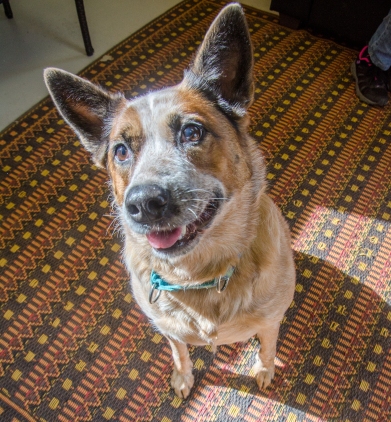 Pepper has some resource-guarding issues of both food and toys, another reason she has go to a home with older teens or just adults. We found, however, that she is very willing to trade a toy for a cheese bit, and takes treats gently.

Pepper is not the dog for everyone. But she would be a wonderful companion for a couple who do not get a lot of company, who like just to stay home and hang out with a dog.

Here is the movie I made about her last July.

We hope just the right people will find Pepper and give her the home she needs.

We have two wonderful updates this week!

Pugsly was adopted by Pam and Tom on November 16, 2015. Here’s a picture I took of him at WHS before he went home. 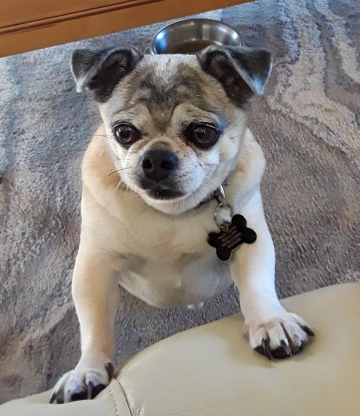 Recently Pam and Tom came back to WHS to add to their family. They fell in love with Wilbur. Here he was with Marianne in Mary’s Place before he went home.

Wilbur is now a brother to Pugsly and canine sister, Suzie. I was so happy to get this update from Pam last week.

“I wanted you to know that a week ago last Monday my husband and I adopted Wilbur. We had come in on four separate occasions to look at him. We were hoping he was going to want to be with us. He did not act very excited, so we went home Sunday after we had put a hold on him. We talked it over and said we both wanted him so much, but we wanted him to be happy.

Well, even if I do say so myself, he is extremely happy. From the first night we brought him home until this moment as he’s lying in my arms, he has been such a wonderful dog. He loves our little Pugsly and Susie and he loves us. He is the best dog we could have ever asked for. I just wish there was some way I could shout to the world don’t ever give up on a shelter dog! They can be the most wonderful dogs in the world.

You know when we adopted Pugsly, I was thrilled. He was and still is the sweetest boy. He is my little snuggler. Winston is different. He loves to run and play. When he is tired, he comes up and snuggles with me and or my husband, Tom.

I could go on and on. We feel so blessed and so lucky that Wilbur/Winston is ours. He fits in our family just like he has always been there.” 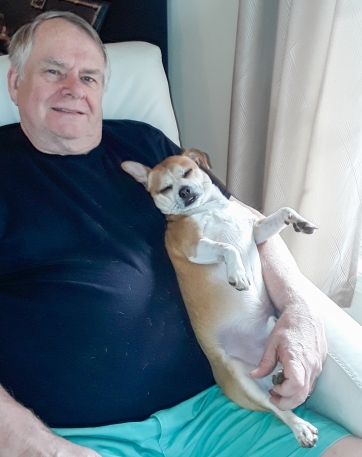 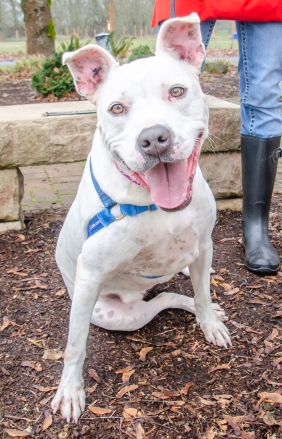 She had been diagnosed with bilateral luxating patellas, meaning her kneecaps didn’t stay in their correct position and she had some arthritis, as well. She didn’t need surgery yet, but might down the road. We worried about her getting adopted, but were thrilled when she was taken home just two days after her arrival. However, Skye turned out not to like the cat in the home and was quickly returned to us. And then the long wait began. Skye did her best to look appealing to potential adopters, leaning against the front of her kennel for pets. But no one took her home.

She dressed up and posed for Valentine’s Day pictures, but still no one took her home.

As the weeks went by, Skye became more and more stressed and started to become jumpy and mouthy. We worried even more and staff tried to find a rescue that would take her, without luck. Then finally, almost seven months after she first arrived, on July 27th, her forever family came to the shelter, fell in love with our challenging girl and took her home. Since that time, those of us who loved Skye often thought about her and hoped that she was happy. I was thrilled when last week I got this update.

“Hi. My wife and I enjoy your articles and reading all about dogs that come thru WHS.  We are the women who adopted baby Skye in late July of last year. She is a fantastic dog, and she has our house and yard to explore and play in. I spend pretty much all day every day with her, and we go for at least one half hour of cardio-paced walk every day, plus zoomies and wrestling and silliness every day. My wife adores her, too, and Skye adores her right back. We’re so grateful to have her in our lives and can’t imagine her not being here.  Thank you for all you did for her and the other dogs who need help. I’ve attached what my wife and I think is the absolute quintessential spirit of Skye picture, and a couple others.” 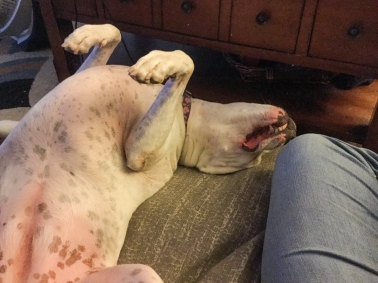 On that happy note, that’s it for this week.