I’m very happy to report that it’s been another grand week of dog adoptions at Willamette Humane Society! Fourteen shelter dogs are shelter dogs no more! And eight of them were Blog Dogs: 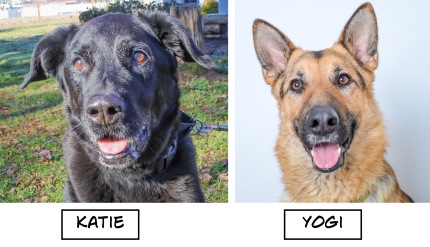 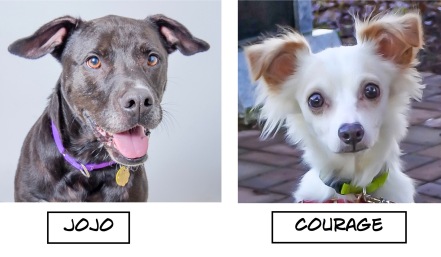 One adoption note: Yogi, one of our long-termers, was going to be Caroline’s Pick of the Week. We took new pictures on Sunday and then found out he went home on Monday! We are thrilled for our sweet boy, but I decided to put in Caroline’s picture with him anyway! Have a great life, Yogi! 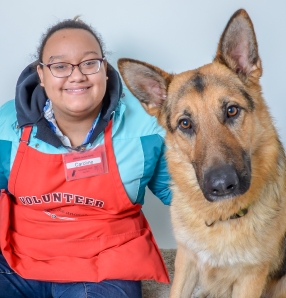 I’m a newbie and it’s taking a little while to settle in, but I’m getting to know people and hope that a new family finds me real soon!

Pepper Jack is a delightful four-year-old Hound/Whippet mix. He can be quite talkative when left alone, so apartment life is not for this boy. Since he loves to be with his people, a retired or work-from-home person would be ideal. Jack scored well on his behavior assessment and had a great time in play group on Monday. He ran right in when he realized it was romping time and was a friendly, active player with other dogs. He loved playing chase with his new friends. Jack would be fine with older children and can settle nicely when given some attention. Marianne spent time with him in his kennel yesterday and wrote this: “He is a lovely dog. After sitting with him for a few minutes, he calms down and then take treats and behaves like a perfect gentleman. I love him.” Since it was pouring rain on Sunday, I took his pictures inside. We’re hoping it will be a short stay as a shelter dog for Pepper Jack. 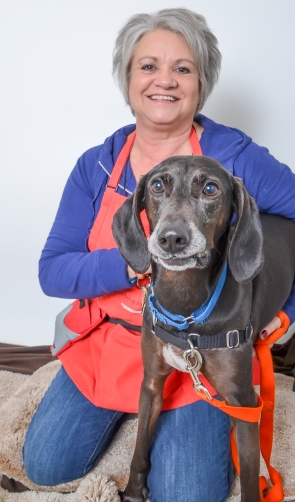 He wasn’t a fan of the bright flash and let me know.

He may have a slightly exaggerated idea of his own importance.

I may be a bit older than some whippersnappers, but just watch me play!

When Roxie arrived at WHS a few weeks ago, we were worried about her. As a shy, ten-year-old Chihuahua, she didn’t seem to have much interest in life around her. Boy, were we wrong. Volunteer Krystal took her home to foster and to see if she would come out of her shell. Krystal quickly reported that Roxie had fit right in with the family’s dog pack and was feeling more and more relaxed and happy. When she brought Roxie in for a vet check last week, I took these pictures of Roxie with her and Marianne. 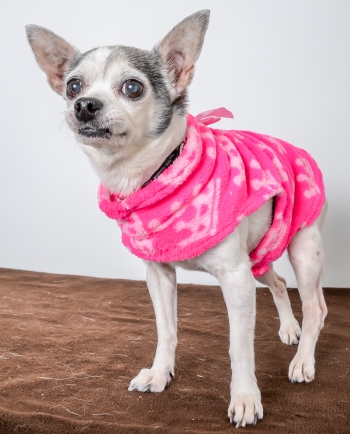 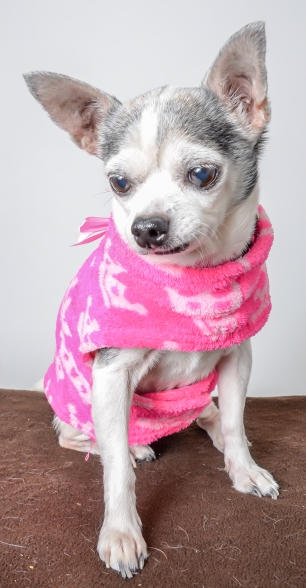 Roxie is the perfect lap dog at eight pounds, is house-trained and gets along with dogs, cats, and older children. The frosting on the cake was this video Krystal took of Roxie playing with one of her foster sisters.

They tell me I’m kind of a celebrity, but I just want a home of my own.

I first wrote about Dodger (or Dapper Dodger as he is known at his previous shelter) last week. I told about how he has been a shelter dog for six-and-a-half years. But I didn’t know at that time that he has earned his Canine Good Citizenship certificate (quite a feat!) or that he had his own Facebook page sponsored by his fans at his old shelter. 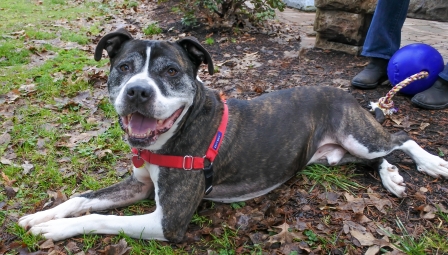 Since then we have corresponded with some of Dodger’s shelter volunteers in Florence and they have wonderful things to say about this much-loved boy:

Nancy: “Dodger has been to more places on the central Oregon coast than some locals. The boys from Camp Florence took him for the day. He has his Good Canine Citizen certificate. He marched in the Rhody Day parade. He has been to the beach, forest, dunes and town many times. He likes riding in the car. He likes jumping over puddles. He is a ball of fun.”

Dodger enjoyed play group on Monday, volunteer Karla wrote: “Dodger pranced and mingled a lot and did join in on some of the chasing games.”

When we found out how much Dodger liked his Jolly Ball at his other shelter, Marianne and I promptly went into Davenport’s Den (our WHS pet store) today and bought him one. Then outside we all went. The pictures tell the rest of the story. 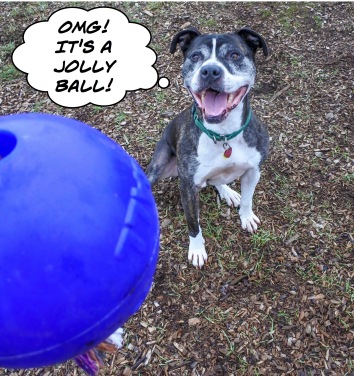 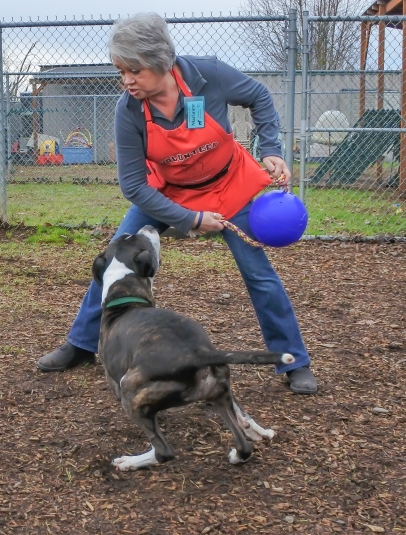 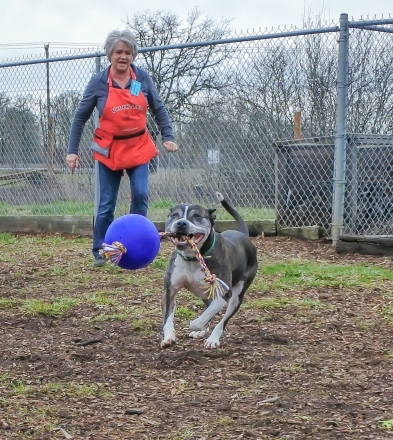 We’re hoping this eight-year-young goofy boy will soon finally find his perfect (catless) family. He certainly has a huge fan club who is pulling for him!

Joker and his Angels

While Joker continues to wait for his forever home, his loyal supporters continue to help keep him happy and interested in life. Caroline, Marianne, Diane and I spent quite a bit of time with him on Sunday afternoon. Joker is a four-year-old German Shepherd mix who has been at WHS several times because of skin issues. Our staff has determined that if Joker stays on a prescription food, he’ll be fine! We all love Joker and want him to finally find his forever home. He needs an adult home and would make a terrific hiking or jogging buddy. 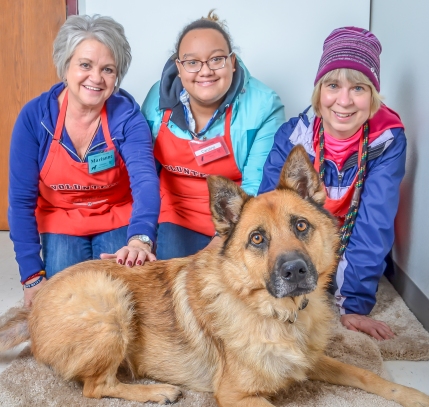 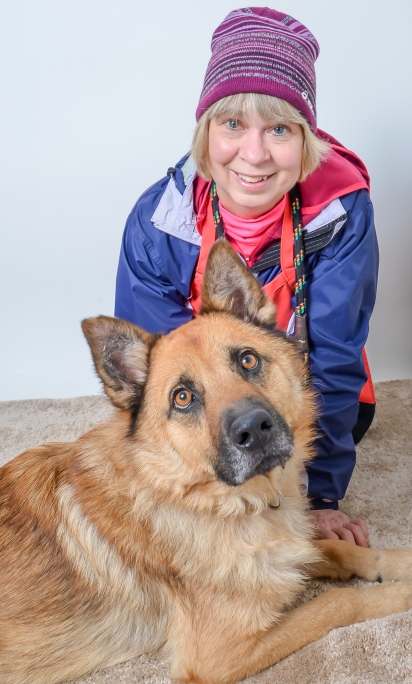 Delilah has been waiting for a home since early December. She is a seven-year-old Australian Cattle Dog mix. At fifty pounds, she is a nice size to take for walks and go for hikes or jogs with. Delilah should probably be an only pet, as she doesn’t like cats and is picky about her dog friends. But she loves people and will play fetch and catch as long as her person will throw the ball. She knows several commands like sit, down, and even, “go potty.” She tries to please, is treat-motivated and very smart. Caroline loves her and so do the rest of us. Today Caroline took her to a yard to play her favorite game in the world, fetch! And play she did! 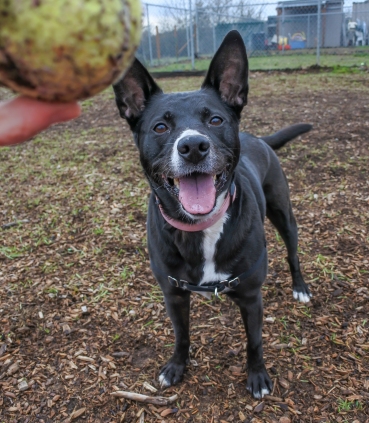 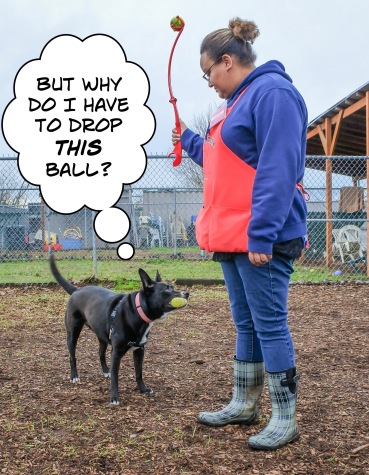 Caroline waited her out. 🙂 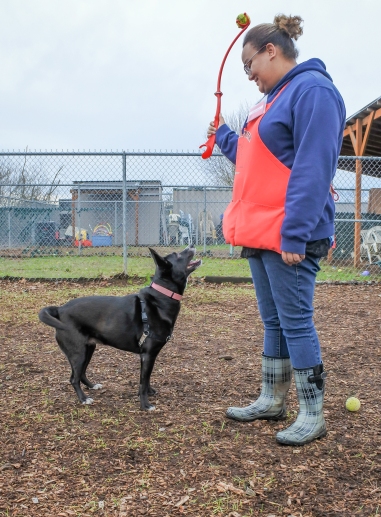 We’re hoping this week will be Delilah’s lucky one.

I wasn’t surprised when Daniel eagerly said that he wanted Lola to be his pick of the week. She came to us on December 21st from another shelter where she had been found as a stray, so we don’t know anything about her history. She is a one-year-old Pit Bull Terrier mix with lots of energy. She has gotten stressed from being in the shelter for so long. She will need an experienced family with older kids with the willingness to work on positive training, though Lola does know a few commands already. She is treat-motivated, so training will be fun for both her family and Lola, herself. She is picky about her dog friends, so would have to meet any potential dog siblings. Lola is very anxious to get out of the shelter environment and into the calmness of a loving home where she can be a family dog. We’re hoping her wish will come true very soon. When I asked Daniel why he had picked Lola this week, he said: “She is fun, loving, energetic, and we clicked the first moment I met her. She gives me kisses, and when I was in her kennel today, I gave her a belly rub and she lay in my lap.”

Do you need a lap warmer? Someone to snuggle with at the end of the day? I’m applying!

So this is Hazel, a one-year-old, nine-pound Pomeranian/Chihuahua mix. This little girl is looking for a quiet home with older kids or just adults, as she’s a little shy. Since she’s a transfer from California, we don’t know much about her, but she is smart, knows some commands, is treat-motivated and adorable. What more would you want? Here she was with Esme on Sunday. I have a feeling she won’t be at the shelter for long! 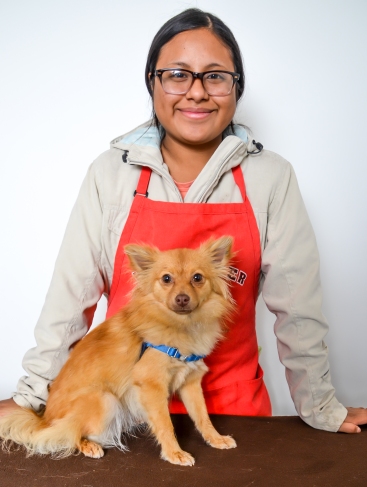 Elsa and Ana/Peanut Butter and Jelly!

Elsa and Ana were two favorites of many volunteers during their long stay at WHS. We were thrilled when a volunteer mother/son team adopted them! Here they were at WHS.

“My mom and I started volunteering at WHS in September and met these two dogs on our first day of dog-walking. We weren’t sure if we were ready for new dogs after recently losing our Jack Russell over the summer. I had assumed that these two dogs would be adopted quickly, because they’re so sweet, affectionate and cute. However, I saw them week after week and after spending a lot of time with them in their kennel I began to bond with them.

“We considered fostering them, but after a mix-up and some confusion as to whether or not they were on hold and by whom, we were both very upset to think that we may have missed our chance to bring them home. When we came in again and spoke to an Adoption staff member, we learned that the dogs were in fact on hold for us to foster-to-adopt. Instead of just fostering, we adopted them outright on the spot.

They’ve been with us now since November 12. They really are fantastic dogs and their unique personalities are even more apparent now that they have a spacious and comfortable home to enjoy. They love to run and play together, or cuddle in their bed or on our laps. I truly believe these are the perfect dogs to complement our family.”