It’s well into the Christmas season and the shelter dogs are starting to get into the spirit of the holidays. Next week we’ll see how many of them are willing to put up with Santa hats and scarves. This week was a trial run with a couple willing participants, as you’ll see. 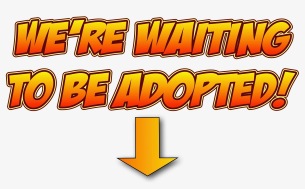 Ruger is a seven-year-old large (65 pounds) happy-go-lucky mixed-breed boy who acts like a lovable giant “puppy.” He revels in toys and treats. He is looking for a family who will give him plenty of exercise and continue the training our Behavior Team has been working on. Ruger has been at the shelter since September, waiting for just the right person or family to adopt him. Ruger is a people dog, but he prefers adults to children.  He is sensitive about being handled roughly, so will need a family with kids 13 and older. He has a condition called “Diabetes Insipidus” which is a water imbalance in his system and will need medicated eyedrops for the rest of his life. If you are looking for a big puppy-acting, goofy new best friend, Ruger might be the perfect fit for you. Marianne and I took him into Mary’s Place where he was a hoot, as you’ll see below.

My many friends here can’t understand why I haven’t been adopted yet.

Pua is a transfer from Hawaii and is an absolute sweetheart. She is about eight years old, but certainly doesn’t act it. She is a Hound mix with a huge smile and the glass-is-half-full kind of attitude. She does get excited when she thinks she’s going to get to play, so older kids, ten and up, would be best for her play style. Pua was adopted once, but she didn’t care for the other dog in the home, so she’ll do best as an only dog. But you won’t need more than one when you have this affectionate girl. Pua loves to cuddle, go for walks around the neighborhood, and work for treats, which she proved to us by being willing to don a Santa hat! She is going to make some lucky family a wonderful companion. Marianne and I spent time with her in Mary’s place on Sunday.

No one told her she had to wear it on her head! 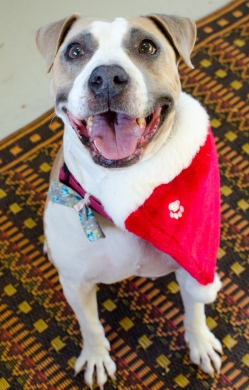 I’m new here, just got off the plane from Hawaii. It’s really COLD in Oregon!

Savannah, a new arrival, is a Treeing Tennessee Brindle mix. She is about a year old and, while a bit nervous when I met her the first time on Sunday, she was eager to please and very gentle. She agreed to wear a Santa hat for her pictures and loved the cheese I offered as an incentive and reward. I don’t know her well yet, but everyone who has met her reports she is wonderful and will make a terrific family companion for older kids. She does have lots of energy, but for kids eight or so, she’ll be just fine. She quickly became one of Caroline’s favorites. We hope she’ll soon have an Oregon home. 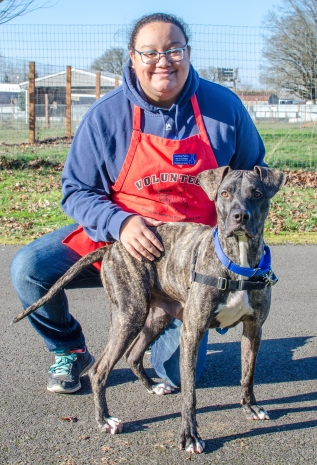 Hunter is a just-arrived two-year-old Border Collie mix, here with Jenna, one of his new fans. He is so handsome! 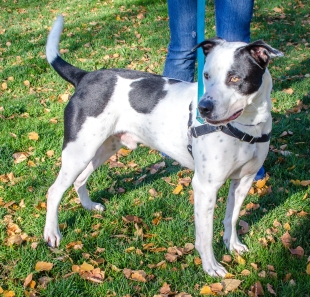 Batman is another Hawaii transfer and is a Pharaoh Hound/Doberman Pinscher mix. What big ears he has! He’s a year old and was so cooperative for his photo shoot! Here he is with Caroline on Sunday. 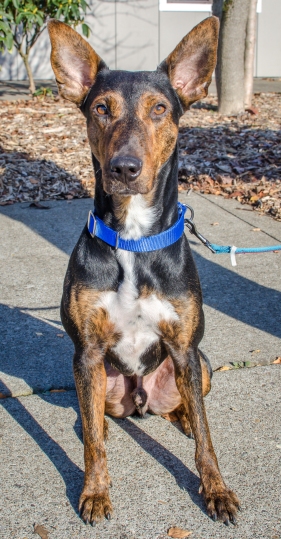 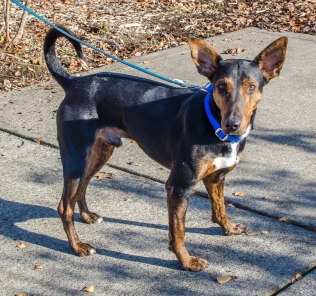 Rascal is an eight-month-old American Staffordshire Terrier mix youngster. He’s been working with the Behavior and Training Team to build his confidence and improve his manners. He’s done very well and is one smart boy. Here he is with WHS staff trainer, Marilyn. 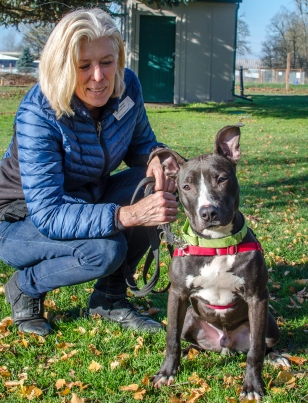 Zabrina is a two-year-old Bull Terrier mix, here with Marianne. She’s such a cute girl, even with just three legs. 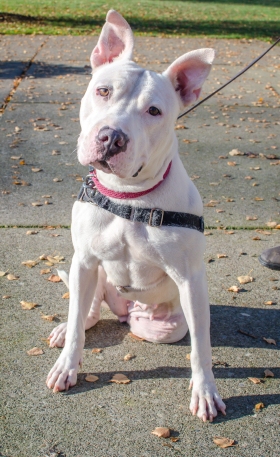 Piper is a four-year-old American Staffordshire Terrier mix, here with Patty. She’s sweet, but will need to be the only pet in the family. 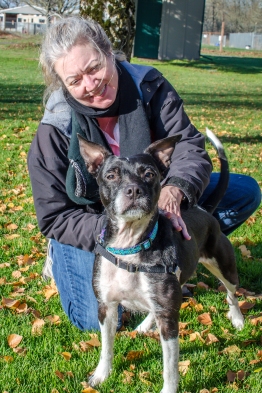 Scarlett is back at the shelter and is very stressed. We’re hoping she will be in her forever home soon. She is a three-year-old mixed breed. Here she is with Christine.

Tyke is a two-year-old American Staffordshire Terrier mix who has energy to burn! Here he was on Sunday with Marianne and me in Mary’s Place.

Buddy continues to thrive and his adoptive parents are crazy about him. This senior boy who arrived with so many medical issues after having a most challenging life has won the jackpot of homes for the rest of his life.

“Buddy wanted to be sure and send you a big helping of Holiday Cheer this winter season! He says he is endlessly grateful for all that everyone did for him during his stay at the WHS shelter. And he loves you!! The first time we put the holiday candy cane headband on him he immediately pawed it off and started to chew it up lol (same with the big red bell) but once he understood that he could get treats by not destroying them he got on the holiday photo shoot bandwagon quickly. He’s such a good boy!” 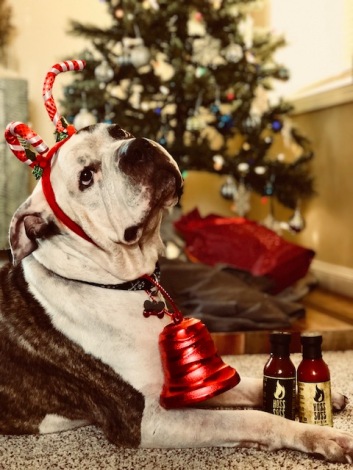 On this wonderful note, that’s it for this week!